Richard and Demi Weitz’s pandemic concert series has been dubbed “Quarantunes” for the past three-plus months that they’ve been raising money for a variety of causes amid the COVID-19 pandemic, but last weekend it earned a new nickname: “the Zoom where it happens.”

That was thanks, in large part, to the appearance of the principal cast members of Hamilton who graced the private Zoom event ahead of the Broadway production’s Disney+ debut on Friday but also because the philanthropic endeavor expanded its scope to raise money for new causes while bringing in a whopping $1.6 million in less than 24 hours.

It started on Friday evening with a special Hamilton experience that drew creator Lin-Manuel Miranda, director Thomas Kail, castmembers Leslie Odom Jr., Daveed Diggs, Renee Elise Goldsberry, Phillipa Soo, Anthony Ramos, Jasmine Cephas Jones, Jonathan Groff, Thayne Jasperson and Okieriete Onaodowan, the latter of whom served as a co-host of sorts and is credited with pulling in everyone’s participation in honor of the night’s focus, Bryan Stevenson and his Equal Justice Initiative. The date of the event, June 26, proved to be an anniversary for the crew who logged on from all over the world on a day when they had been doing press to promote the film.

On June 26, 2016, Kail filmed the first of three Hamilton performances with the original cast that would be cut to become the wildly anticipated work. He was the first to note the anniversary by calling out how special it was to virtually reunite on Friday evening four years later to the day. “To think, four years back from then to now, where we are, with this original company, it was a once-in-a-lifetime group,” Kail said, addressing the capacity Zoom crowd of 1,000. “Making theater is like writing messages in the snow, eventually it goes away. At the best, you’re carving in wood, and this felt like the chance to try to carve something in stone, in marble, that could last and last. This company deserved it, this show deserved it.” 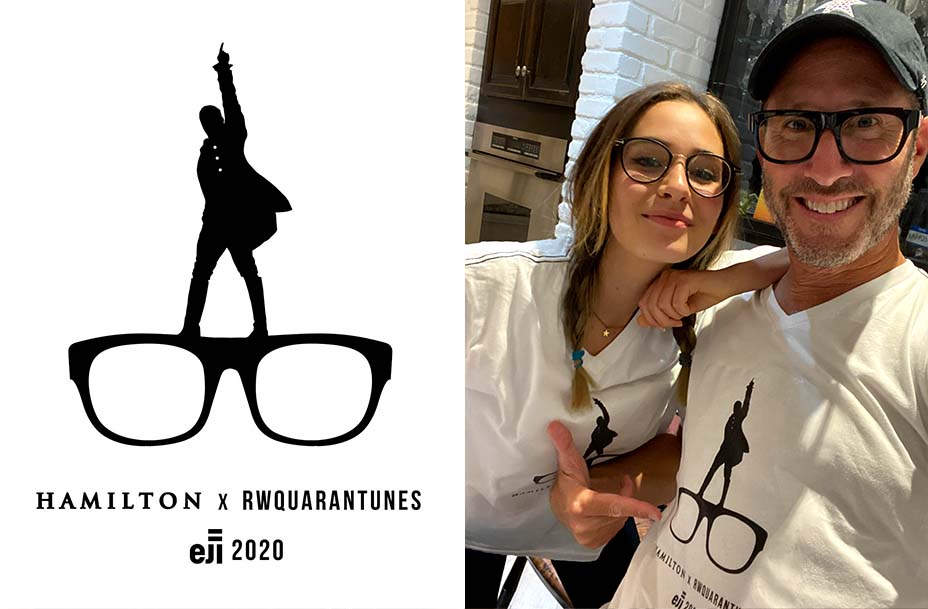 Per Richard and Demi, the current times of racial injustice against the backdrop of a public health crisis necessitated that they expand their long-running “Quarantunes” to raise money for causes outside of the health crisis. So, they zeroed in on Stevenson’s EJI and partnered with the Hamilton crew to deliver a unique virtual experience for his work that is committed to ending mass incarceration and excessive punishment in the United States. While they didn’t exclusively perform tracks from the Broadway smash, Miranda delivered an electric performance of “My Shot” while he got his own later by teaming with guest star Ashanti on a rendition of “Helpless,” something he said he could check off his bucket list. He said he wrote the song using her and Ja Rule’s collaborations as inspiration.

It was just one of many mic drop moments during the hours-long affair that also included a surprise appearance by Disney chief Bob Iger who praised Miranda, Kail and Jeffrey Seller for partnering with the studio on the release, which was originally intended to be theatrical before the pandemic forced a digital bow on the recently-launched streaming platform. “It’s an incredible thing to be able to bring to the world particularly at this time,” he said, while also giving a shout out to WME partner Richard and daughter Demi for raising millions for needy causes. Iger has been a frequent guest on “Quarantunes” and he said he couldn’t think of a better cause than EJI for these current times. “My wife, Willow, and I are making a donation as part of this call and I’m sure the Walt Disney Company will step up at some point as well, too. Thank you for the opportunity.”

Richard then asked him to explain what he would be doing come July 3 when Hamilton hits the service. “You know, when things like this happen, I like to look out the window to houses all over the neighborhood and just imagine that every single house is tuned into one thing and I actually believe that July 3 — not only around the United States but in many places around the world — there are going to be a lot of households watching Hamilton on Disney+. … What they have created here is simply magical. We cannot wait to show this to the world because of how special it is.”

Iger’s $100,000 personal pledge helped the night hit the $800,000 mark along with other major contributions from WME, Goldman Sachs (represented by former football star Justin Tuck of the Super Bowl-winning New York Giants) and Casey Wasserman, among many others. Also appearing was New Jersey Senator Cory Booker, who joined thanks to performer Aloe Blacc, and was the latest in a long line of elected officials who have joined “Quarantunes” including Gov. Gavin Newsom, L.A. Mayor Eric Garcetti, Atlanta Mayor Keisha Lance Bottoms and others.

Other highlights of the Hamilton night: Andra Day introducing newly-crowned Peabody Award winner Stevenson and his work with EJI (she joined him at the opening of The Legacy Museum: From Enslavement to Mass Incarceration where she performed Billie Holiday’s “Strange Fruit” which she also delivered at the event); Groff introducing the event in his King George accent from Germany where he’s filming the new Matrix installment; Odom and wife Nicolette Robinson performing from their backyard with Odom even joking that it was the “Zoom where it happened”; Auli’i’ Cravalho surprising Miranda, her Moana collaborator, with an acapella version of “How Far I’ll Go”; Richard surprising Ashanti by bringing in El DeBarge whose “Stay With Me” she sampled on “Foolish”; the Schuyler sisters Angelica, Eliza and Peggy (Goldsberry, Soo and Jones) appearance for the presentation of their clip performing “The Schuyler Sisters” during the Kennedy Center Honors; Aloe Blacc performing his Hamilton Mixtape track “Wrote My Way Out”; Jasperson introducing an exclusive video made for the event featuring some of the background dancers; and Diggs’ mesmerizing solo on tracks from Clipping, his side project with Rafael Casal.

As the Weitzes said goodbye, people logged off by the hundreds, leaving just a little more than 100 who lingered past 9 p.m. Richard asked El DeBarge and a few other performers to stick around and they agreed. The singer, along with “Quarantunes” regular Amos Lee, Johnny Gill and Natasha Bedingfield, performed for another 90 minutes and continued raising money and swapping stories about Quincy Jones, Prince and other legends. “It was nuts,” said Richard.

He also said the same about what happened the following afternoon.

“Quarantunes” reconvened in honor of Pride month to support Broadway Cares/Equity Fights AIDS, an organization that has a wide reach, serving men, women and children across the country with medications, health care, meals, counseling and emergency financial assistance. It has stepped up to help unemployed performers during the pandemic while also pitching in where the needs are, under the guidance of executive director Tom Viola. He, along with Danny Whitman, Lane Beauchamp and other organization staffers, joined the event which was supported by their longtime supporters Bernadette Peters, Judith Light and Nathan Lane who each took a turn in the spotlight. Also appearing was Endeavor Content’s Kevin Iwashina, who leads premium non-scripted and the firm’s inclusion initiative, and brought Broadway Cares together with Richard for the special Pride celebration. He also introduced and gave a special shout out to the Netflix documentary Disclosure and its director Sam Feder.

The show opened with appearances by Taylor Dane (who had to hustle to get to a private backyard gig in Orange County), Idina Menzel (singing “You Are So Beautiful” and half of the megahit “Let it Go”), Diane Warren and “Quarantunes” co-pilot Clive Davis. Having Menzel on the show proved to be particularly meaningful for Richard and Demi as the Tony Award-winning star has been a friend of the family for 17 years and having performed in their background when Demi was only two months old. It was also a meaningful installment for Davis as it allowed him to reunite with artists such as Arista artists Dayne, Air Supply, Carlos Santana and share the legacy of their work together.

Other performers included Air Supply’s Russell Hitchcock and Graham Russell (“All Out of Love,” “Lost in Love” and “Sweet Dreams”), Cyndi Lauper (“True Colors”), Rufus Wainwright (“Gay Messiah”), Jennifer Hudson (“All is Fair”), Wyclef Jean (“If I Was President”), New Radicals frontman Gregg Alexander (“You Get What You Give”), The Phantom of the Opera star Norm Lewis (special for Richard who was wearing his Jean Valjean t-shirt), George Benson (“The Greatest Love of All,” a track he penned for the Muhammad Ali movie and later given to Houston by Davis), Philippa Soo (“Children Will Listen”), Deborah Cox (with a set including “Nobody’s Supposed to Be Here,” Whitney Houston’s “I Will Always Love You” and a Broadway medley), and Debbie Gibson, Richard’s friend of 25 years and the first performer to join “Qurantunes” before it became an official event. Gibson performed a medley of her biggest pop hits.

The Broadway Cares effort got a boost from supporters Phil and Liz Gross who helped the competitive cause top Hamilton’s haul by matching donations to bring the day’s effort to north of $860,000. Combining the weekend numbers, Richard and Demi’s “Quarantunes” has now raised in the neighborhood of $6.7 million in 14 fundraising events which they both admit takes a minute to process since they’ve done it all from their kitchen counter (and the Hollywood Bowl stage). “We’ve adapted to the issues in the world as we’ve gone along,” explained Richard of how they’ve rallied power players in Hollywood to donate to hospitals and nonprofits in the beginning and now, to social justice causes like EJI. “We started by simply doing our part to fill in the financial losses for organizations that need it so desperately. And what we’re seeing now, this is far from over. We have to keep going.”

After the dust had settled from the weekend, Demi told The Hollywood Reporter that she still was wrapping her head around the haul of their series, which began as a way to celebrate her 17th birthday. “I thought that nothing good came between being 16 and 18 and that number has changed my life. Now, 17 is my number. I can’t believe the work my dad and I have done,” she said. “I felt very unheard for awhile and now that this quarantine has lended itself to being a platform to speak my voice and give back is more touching than anyone will ever know. Giving back, I’ve learned, is the gift of all gifts.”

She also said sitting alongside her dad while speaking to politicians, power players and some of music’s biggest names has changed her life. “I’m in awe of my dad and so inspired by him. I can be really stubborn but to see him work right next to him has changed our relationship. To see my dad living out a dream of his, I know this is the highlight of his life,” she explained. “It’s something that will be with us for the rest of our lives.”