Trumbo, the biopic about the Roman Holiday screenwriter who was blacklisted during the 1940s and ‘50s Red Scare, barely earned $400,000 in South Korea. Nearly a year after its unremarkable release, however, references to the film have been popping up in local op-eds, as South Korea deals with its own McCarthyian reality: Asia’s entertainment powerhouse has been shaken up like never before, as prosecution probes have confirmed the existence of a blacklist.

The notorious list features nearly 10,000 artists, including the likes of Oldboy helmer Park Chan-wook, Snowpiercer actor Song Kang-ho and Man Booker Prize-winning novelist Han Kang. The blacklist was designed to deliberately exclude artists “deemed unfriendly” toward President Park Geun-hye from state-controlled support programs. Culture Minister Cho Yoon-sun was arrested on Jan. 21 for her alleged involvement in the blackballing, and she issued a public apology for blacklisting artists and denying them government funding “due to their political and ideological beliefs.” Local daily newspaper Hankook Ilbo broke the news about the list in October, and industry insiders have since come forth claiming that they had been discriminated against due to being blacklisted.

Revelations about the blacklist have infuriated the public. Massive weekly protests — the largest since the 1987 pro-democratization movement — have taken place since late October. “[The Park administration] has seriously undermined the freedom of thought and expression,” said a representative for the special prosecution team handling the blacklisting as part of a larger probe into the president. The team was appointed by the justice ministry and the president herself before she was suspended from her duties. Park faces a snowballing number of charges of corruption and abuse of power involving her close confidante Choi Soon-sil. Though holding no government position, she allegedly influenced Park’s policies, edited presidential speeches and coerced businesses to donate millions of dollars to organizations she runs. The blacklist is expected to put further pressure on the disgraced president in her impeachment trial, which is due the start in the coming months. 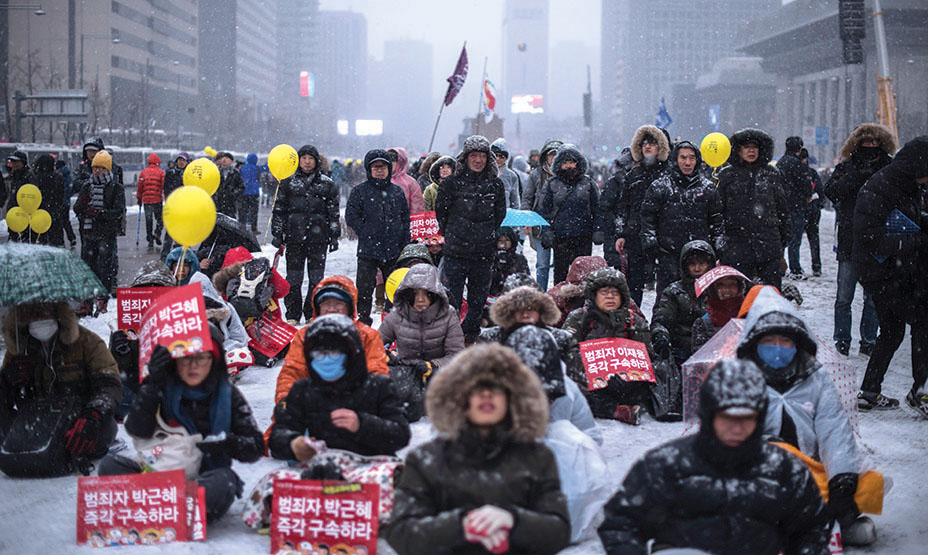 Filmmakers haven’t been shy about voicing their displeasure. In December, members of six major local industry organizations, including the Directors Guild of Korea headed by filmmaker Bong Joon Ho, as well as six arts groups spanning actors and visual artists, took part in a rally in front of the office of the special prosecution team. The artists demanded a probe into the scandal and condemned Cho and former presidential chief of staff Kim Ki-choon, who was arrested along with Cho.

And on Feb. 7, the Directors Guild of Korea said that more than 1,000 industry people signed a petition calling for the ouster of Korean Film Council Director Kim Se-hoon and former Busan fest chair and Busan Mayor Suh Byung-soo.

Cho is the first sitting member of Park’s cabinet to be arrested as part of the probe. Former Culture Minister Kim Jong-deok and two other former senior officials also were arrested for their alleged involvement.

“Rumors about a blacklist have openly circulated around the film industry for a long time,” says Train to Busan director Yeon Sang-ho. “The difference is that it has now become official.”

The origins of the blacklist reportedly go back to 2014, when Mayor Suh, a member of the conservative ruling party, tried to stop the Busan Film Festival — the largest film event in South Korea — from screening The Truth Shall Not Sink With Sewol, a controversial documentary about the MV Sewol, a ferry that capsized off the southern coast of Korea in April 2014, killing 304 people. The local film industry reacted by organizing some of the largest protests to date and even threatened to boycott the 2016 edition of the festival. Organizers claimed that the festival suffered “political retaliation” in the form of drastic state budget cuts and unprecedented audit reviews after premiering the documentary. 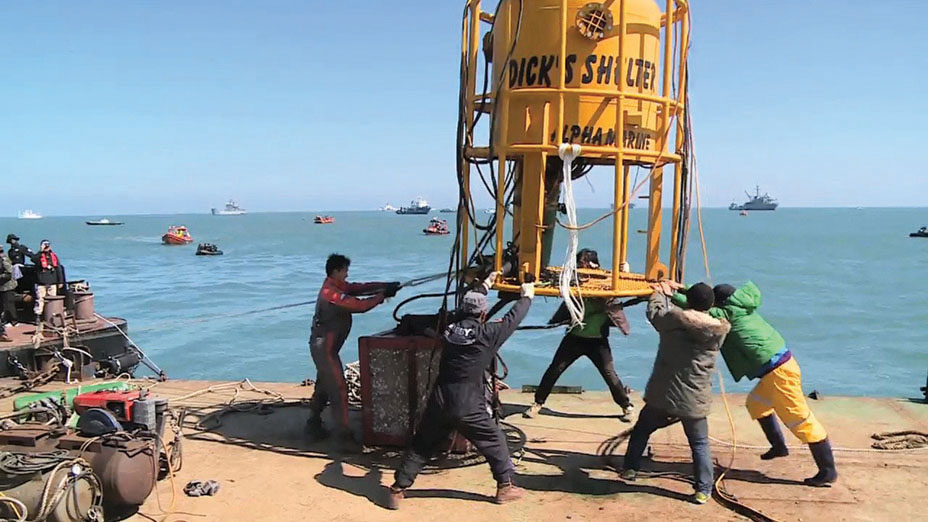 “The past two years were devastating for the Busan Film Festival and should never happen again,” says fest director Kang Soo-youn. She adds that the fest is “doing its best to cooperate with prosecutors to help reveal the truth.”

Prosecutors have discovered that the blacklist was ordered from the president’s office in May 2014, shortly after the ferry tragedy. Many of the blackballed artists, including Park Chan-wook, had openly criticized the government’s handling of the accident. Those involved with the ferry documentary found themselves on top of the blacklist.

Kim Il-kwon, CEO of the doc’s distributor Cinema Dal, claims that the company was excluded from state funding, underwent a tax investigation and employees’ cellphone bills were inspected. Prior to the ferry doc incident, the distributor had regularly received funding from the Korean Film Council, but it has since faced financial difficulties releasing its recent titles. “The blacklist has taken such a toll on not just us but many other filmmakers and artists,” said Kim during the Jan. 21 protest.

Others have pointed out that censorship measures have always existed in the country. “There was always some form of blacklisting and censorship, even during the [liberal] Roh Moo-hyun administration [from 2003- 2008],” says art historian and film critic Jeong Ji-ouk. “The core problem is that the 1996 Constitutional Court decision on censorship simply stated that censorship was unconstitutional and didn’t explicitly ban it. We can only hope there will be more discourse and debate on the issue and that more people will defend freedom of expression in Korea.”

The controversy has had an unexpected effect on the local box office, with a string of local films resonating with the public for addressing a sense of political turmoil and unrest in the Asian country. Master, CJ Entertainment’s crime thriller about a con man abusing his political connections, topped the box-office charts for two straight weeks in December to earn $50 million, while The King, about corrupt prosecutors controlling state affairs, debuted at No. 1, reaching a total of more than $36.2 million in just three weeks.

“Film is a democratic art form that cannot ignore public sentiment. Movies mirror the thoughts of the times and pick up on what the masses want,” says Kim Si-moo, president of the Film Studies Association of Korea. “People are responding to movies that show lack of leadership at the highest level, a disintegration of functional systems and overall sense of unease.”

In March 2014, Avengers: Age of Ultron made huge headlines in South Korea as it became the most high-profile Hollywood film to shoot in the country. Traffic news feeds constantly were updated as the 16-day production blocked off major streets and bridges throughout downtown Seoul. Public bus routes temporarily were altered to cater to the production that took place in some of the busiest areas of the South Korean capital, including the now-famous Gangnam district. Local authorities enthusiastically supported the shoot, which was expected to help promote Seoul and revamp tourism.

It wasn’t a bad choice for Marvel Studios, which received a $2.3 million rebate via the Korean Film Council’s location incentives program. Launched in 2011, the program offers up to 25 percent cash back for production spending on feature films, TV series and documentaries. Another Marvel production is due to return to Korea soon: Black Panther, starring Chadwick Boseman, will utilize a number of locations in the port city of Busan.

Korea has long been a hot destination for Asian TV and film productions — about 70 percent of the upcoming Japanese zombie flick I Am a Hero was shot here in 2016 — and film bodies and local metropolitan governments have been welcoming an increasing number of Hollywood projects.

In March, the makers of sci-fi actioner Colossal, starring Anne Hathaway, arrived in Seoul and the satellite city of Bucheon. The action sequences shot out on the streets, including a massive mob scene featuring about 800 extras, reportedly account for about 10-15 percent of the production. Local media have noted how the 20 minutes of screen time will be the biggest exposure of Korea’s cityscape in a Hollywood film. Fans, however, were disappointed that Hathaway was unable to fly in for the shoot.

“More than 150 members of the cast and crew, plus extras, were hired locally,” says a representative for Daejeon’s metropolitan government. “These kind of projects help revamp the local economy, and we are also hoping that it will help promote our city of Daejeon.”