Dozens of celebrities gathered Tuesday night for “Hand in Hand: A Benefit for Hurricane Relief,” which broadcast live across 15 networks and 150 radio stations nationwide while streaming on social media. Django Unchained co-stars Leonardo DiCaprio and Jamie Foxx opened the hourlong special, with fellow presenting pairs Oprah Winfrey and Cher, Reese Witherspoon and Nicole Kidman, Tom Hanks and Rita Wilson, Robert De Niro and Jon Stewart, and Sofia Vergara and Tyler Perry helping to raise more than $14 million before the program ended for the victims of Hurricanes Harvey and Irma, the back-to-back Category 4 storms that ravaged Texas and Florida over the past two weeks. With organizers continuing to accept donations overnight, the event raised more than $44 million by Wednesday morning.

Seinfeld star Jason Alexander has close family living near each recovery zone: a 97-year-old mother in Coral Springs, Fla., who “took it in stride,” and a brother in Houston who is still able to receive his dialysis treatments. “He’s okay for now,” Alexander told The Hollywood Reporter. “Those patients become priority patients, so he can do it, but it’s ugly.”

The actor had hope, he added, because of New Yorkers’ “generous” spirit: “If New Yorkers were not generous people of spirit and heart, New York couldn’t function. So it never surprises me when New York and New Yorkers come out and show that side of themselves.”

While CBS This Morning anchor Norah O’Donnell, a Texan who reported from Harvey, noted that “there’s not a clear link with climate change” and these hurricanes, Steve Buscemi laughed while telling THR, “It just seems obvious that we are living in a time that is very dangerous with climate change and that if we don’t act, these types of storms, I think, are just gonna keep happening and it’s not going to get better.” He continued, “I don’t mean to be political, but I just wish that this administration would really pay attention to that and acknowledge that not only is there climate change, but that it is partly man-made.”

As a former firefighter, he wants those watching the storm wreckage to remember that aid workers may be very much in need themselves. “We certainly learned that with [Hurricane] Sandy” in 2012, Buscemi said. “The Rockaways were really hard hit and there’s a big firefighting community that lives there. So a lot of these firefighters would spend most of their time helping other people when their own homes were flooded as well.” 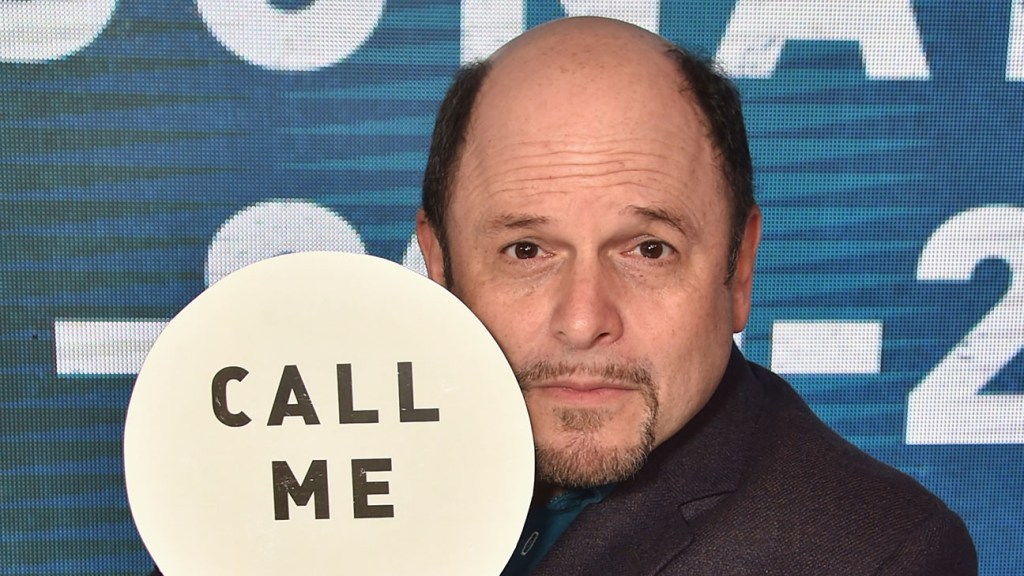 One of Jon Stewart’s greatest legacies from The Daily Show is successfully lobbying Congress to pass the James Zadroga 9/11 Health and Compensation Act to help those whose risked their lives at Ground Zero 16 years and one day ago. “When disaster strikes, generally, the overwhelming majority of people run the other way,” Stewart explained. “And then there’s this one group of people, very small, that run towards it. And those are our first responders and it’s the kind of thing that’s very easy to take for granted when it’s not at the forefront of our news cycle, but it’s important to remember they do this every day. Not just when there’s a hurricane. They’re always out there, and they are always working and they’re always—very similar to Batman.”

Stewart also told THR that he’s glad that kids, 13 and 11, are old enough “where I don’t need to say, like, ‘Sometimes God cries and the rain causes damage to houses,’” amid news of cataclysmic flooding, adding, “My daughter—because of YouTube—is probably more up geopolitically and otherwise” than he is. “Every now and again I’ll just come down, I’ll be like, ‘What are you doing?’ and she’ll be on the computer: ‘I’m watching a Vox explainer about North Korea.’”

Magician David Copperfield said he’s still reeling from the footage of “families in the water, chest high, swimming around. …The power of water is incredible. It’s our friend and it can be an enemy, too.” Meanwhile, Bruce Willis sees “the hope side of the world” in how Americans have organized for victims. “Florida’s taken a brutal beating, and you just have to try to help, right?” 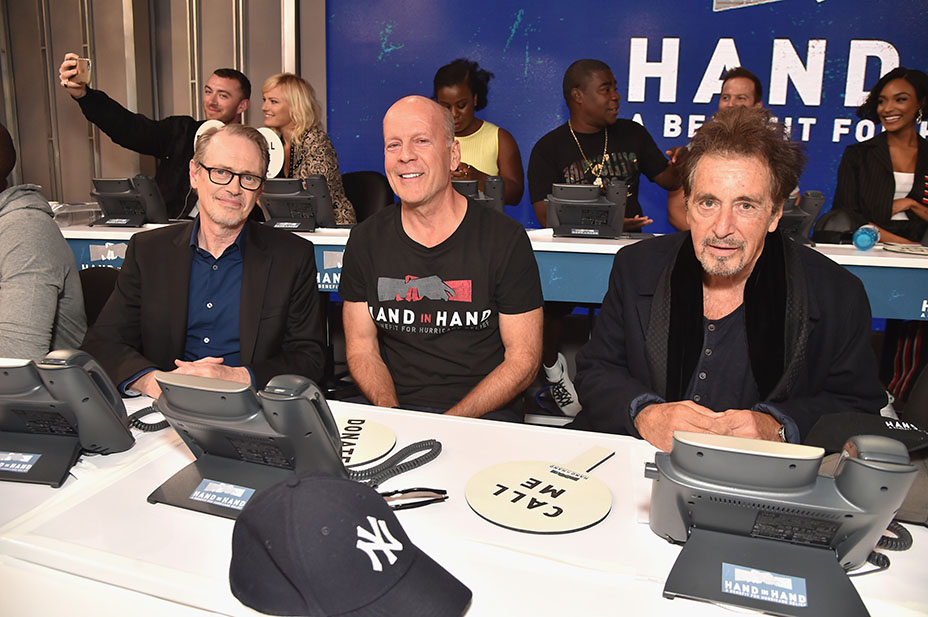 In Los Angeles, dozens of famous faces manned the phone banks at Universal Studios, putting their high profiles to work in thanking callers from all over the globe for their contributions.

“People are happy to talk to you, and they want to make a donation,” said Jay Leno, whose familiar voice was on the end of the phone for many callers. “Five dollars here, ten dollars there, 20 dollars here – that all adds up.” Leno added that if the possibility of chatting with a celebrity provided an added lure for donors, he and his fellow stars were happy to do their part.

“If you call and a guy says his name is George Clooney, it’s probably not the George Clooney from Randolph, Mississippi – it’s George Clooney,” chuckled Leno (Clooney did indeed work the phones throughout the broadcast). “I think for fans, that’s a huge thing. They get to talk to their favorite celebrity for a minute and help out, so that’s great.”

Craig Robinson was impressed with the kindness on display in the calls that he fielded. “They were all so gracious,” he said. “They would donate, and then they got transferred to us, so we were basically saying, ‘Thank you so much for your donation. Hello – who are you, and where are you from?’ When I would talk to them, they were just so grateful that this was happening, having a chance to donate in this way. And all of them, every last one of them, said, ‘I wish I could give more, more, more.’”

Taboo of the Black Eyed Peas noted that he did get one unique request from a caller: “’Can you hand me over to Stephen Colbert?’” he laughed. “I was like, ‘Uh, he’s on the other side.’” 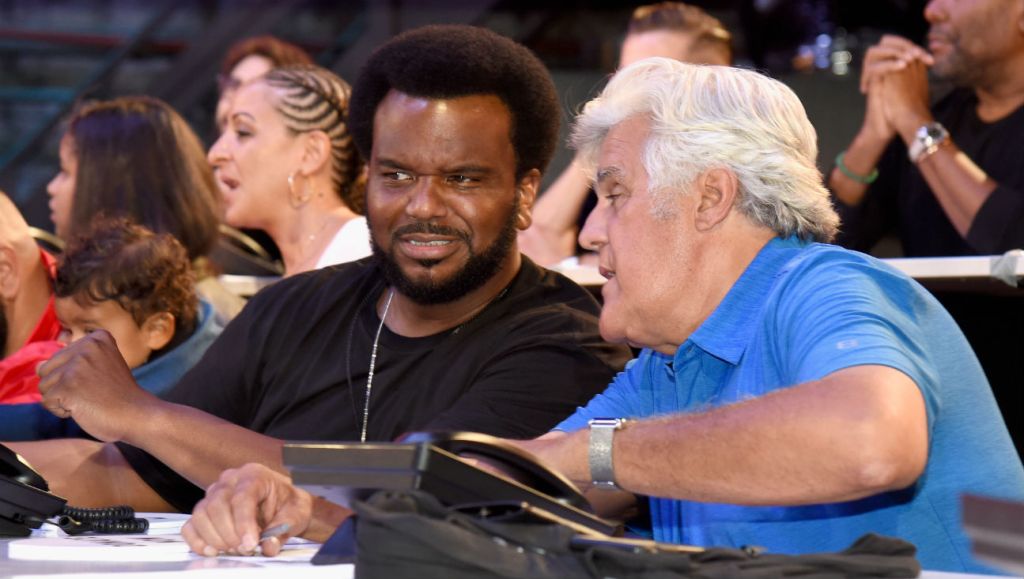 Some of the celebrity volunteers also have personal connections to the areas in Texas and Florida ravaged by the two hurricanes. “I’ve got relatives in Florida,” said Leno. “My uncle’s 90. I just spoke to him today. Luckily, the phones are still good, but the electricity is out. He’s on the seventh floor of a condo. There are no elevators. They can’t get downstairs. The lobby’s flooded. It’s hard.”

The former Tonight Show host added that he was relieved that, in the midst of such devastation, there was some relief to the division and polarization that has characterized the national discourse of late in favor of helping out their fellow Americans.

“It’s good to see people put the political stuff aside, the racial stuff aside,” said Leno. “Just people helping people. I just watched something on the news: a couple of black teenagers had a row boat, and they help an old white lady. Thank you – that’s nice to see, and vice versa. It’s nice to see people helping other people without any whole political, racial, whatever it is. If there’s a silver lining to it, that’s certainly it.”

The telecast wove together live dispatches from New York City, Los Angeles, Nashville and San Antonio; taped testimonials featuring the likes of Beyoncé and Selena Gomez; and musical performances. Usher and Blake Shelton, who once judged The Voice together, sang “Stand by Me.” Later, Demi Lovato, Brad Paisley, Darius Rucker and a medley of others crooned to “With a Little Help From My Friends.”

Scooter Braun and Houston rapper Bun B organized the show, which will benefit United Way of Greater Houston, Habitat for Humanity, Save the Children, Direct Relief, Feeding Texas and The Mayor’s Fund for Hurricane Harvey Relief (administered by the Greater Houston Community Fund) through the Hand in Hand Hurricane Relief Fund managed by Comic Relief Inc. More information is available here.

Demi Lovato, Brad Paisley and More Cover "With a Little Help From My Friends" for 'Hand in Hand' Telethon