The 2020 Golden Globe Awards sparked a sea change when the Hollywood Foreign Press Association switched the dinner menu to all plant-based ingredients, a first for a major awards show. The Critics’ Choice Awards and the Screen Actors Guild Awards then followed suit, as will WME for its Oscar weekend party (catered by vegan restaurant Nic’s on Beverly).

Other awards-season soirees are now feeling the heat in the kitchen as organizers scramble to figure out what will send the right message. So far, the Academy has not declared whether its Governors Ball will go all-vegan. Last year, it presented 15 vegan dishes, along with meat and fish, courtesy of chef Wolfgang Puck.

Not everyone can go vegan, some organizers say. “Our meal will include a vegan option, but as this is a fundraiser, we provide all meal options for guests purchasing tables,” a rep for the Elton John AIDS Foundation Oscar party says. In-N-Out burgers have been served at Vanity Fair‘s Oscar party for several years. A magazine spokesperson says plans for 2020 are not yet finalized.

“We are seeing a lot of changes and I think it is because of people making big bold strokes,” musician Linda Perry told The Hollywood Reporter on Jan. 15 at Sean Penn’s Core gala. “Being vegan really means it’s better for the world. The dairy industry kills the ozone. There are so many things that meat and dairy do to the planet that’s not good. So being vegan is helping.” 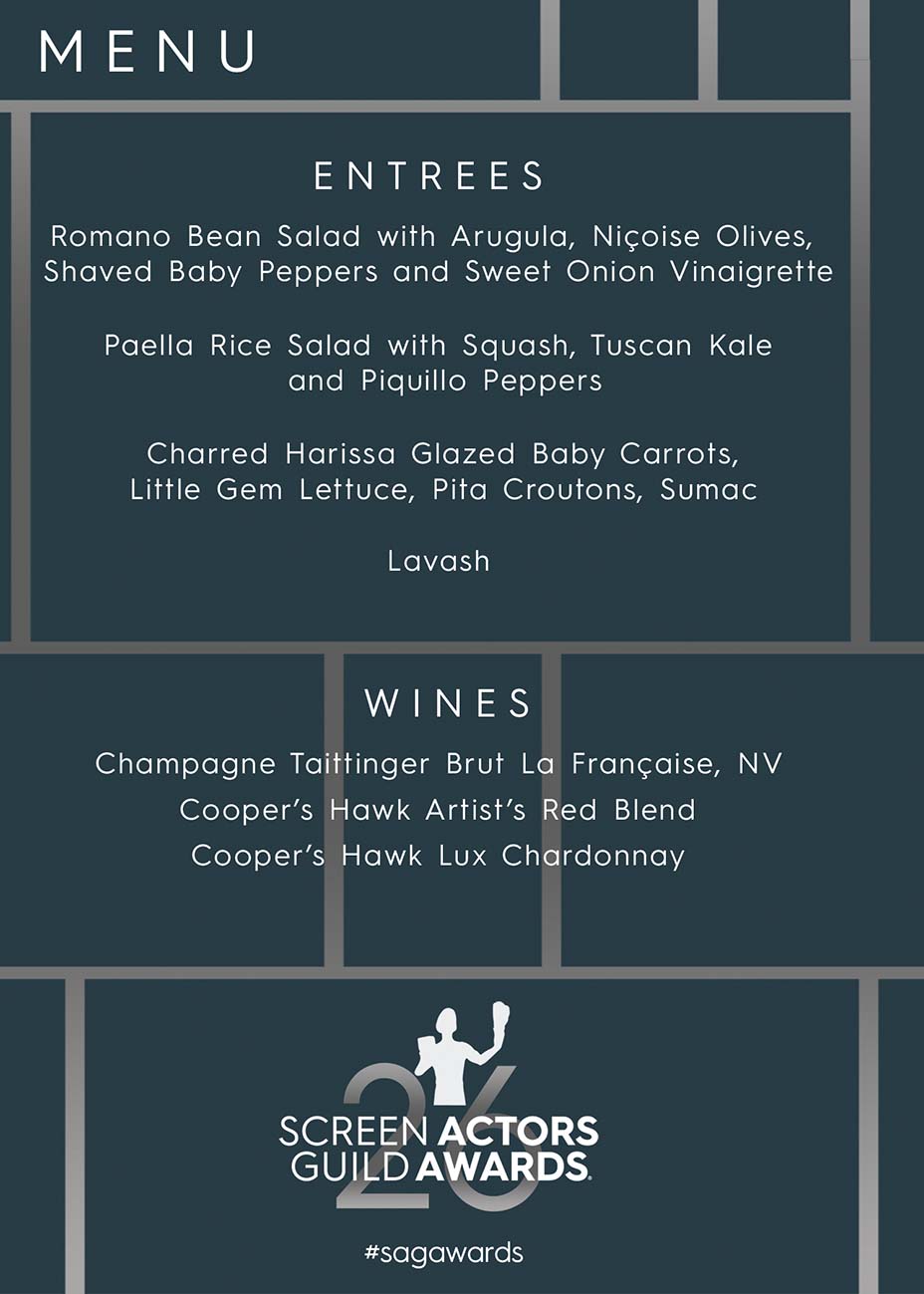 HFPA president Lorenzo Soria tells THR he wasn’t sure how the Globes’ plant-based move would be perceived but was “pleasantly surprised” by the worldwide attention it generated. “We touched a nerve,” he says. “We did this at a moment when everybody is concerned about the environment and climate change.” As to whether longtime vegan Joaquin Phoenix convinced the HFPA to go plant-based, Soria says the change was supported by “many other people,” including Leonardo DiCaprio, Ricky Gervais, Christian Bale, Margot Robbie and Mark Ruffalo.

Continues Soria, “To make it even better, the people who were in the ballroom at the Globes — including some very skeptical people and people who were making fun of the vegan meal — appreciated it in terms of taste. In other words, the Hilton did an excellent job with the ingredients!”

Various other awards events may not be going all-vegan this year but will have plant-based sustenance available for those who ask, such as the bicoastal WGA Awards on Feb. 1. “We offer all attendees a vegan dinner option,” says a WGA rep, adding, “We will discuss moving to an all plant-based menu for next year’s ceremony.”

Film Independent’s Spirit Awards, held the day before the Academy Awards on Feb. 8, has incorporated environmentally forward practices for many years. This year’s show will feature “locally and sustainably sourced vegetarian and vegan options in our family style meal, and we’re also including other non-plant options,” says Josh Welsh, president of Film Independent. The event’s caterer of seven years, Kitchen for Exploring Foods, recycles everything from packaging to cooking oils. And, Welsh adds, “leftover food is donated, not discarded.”

Party planner Ben Bourgeois, who counts Vanity Fair among his clients, however, says, “Vegan is ‘a la moment,’ as are so many food trends.” He notes “meat eaters are back,” while there are always those who will ask for “vegan or other special requests, but not a big percentage.”

But planner Gina Wade of Gina Wade Creative, who is working on Neon’s Oscar party for Parasite, among other awards shindigs, says eco-friendly event choices are “definitely a topic of conversation — even DJ riders are requiring beverages in glass bottles and no single-use plastics.” And Wade says it’s all being viewed very positively among her clients.

For her part, The Farewell director Lulu Wang says she’s looking forward to less meat on the awards circuit: “When you are dressed up, you never want to eat anything real heavy anyway, so it sounds great.”

Joaquin Phoenix Followed SAG Awards With Vigil for Pigs: "I Have to Be Here"