The first lady, who is currently accompanying President Donald Trump on his first major foreign trip to the Middle East, touched down in Saudi Arabia over the weekend, a country where aspects of Hulu series The Handmaid’s Tale ring all too true: gender segregation is the norm, women are unable to drive, do not have the full vote and only recently won the right to open their own bank accounts.

The oil-rich kingdom is also known for its conservative dress code, which is enforced by the religious police. Saudi women have to be covered in robes known as abayas, usually paired with hijabs (headscarves) or niqabs (which leave only a slit for the eyes), or wear a full burqa covering the body from head to toe.

Much has been made of Melania’s choice not to wear the customary head scarf on the trip, but many women who have visited the kingdom before did the same, including former first lady Michelle Obama, British Prime Minister Theresa May and German Chancellor Angela Merkel. Though the Islamic head covering is required for Saudi women, wives and female family members of foreign dignitaries can choose to wear it or not. 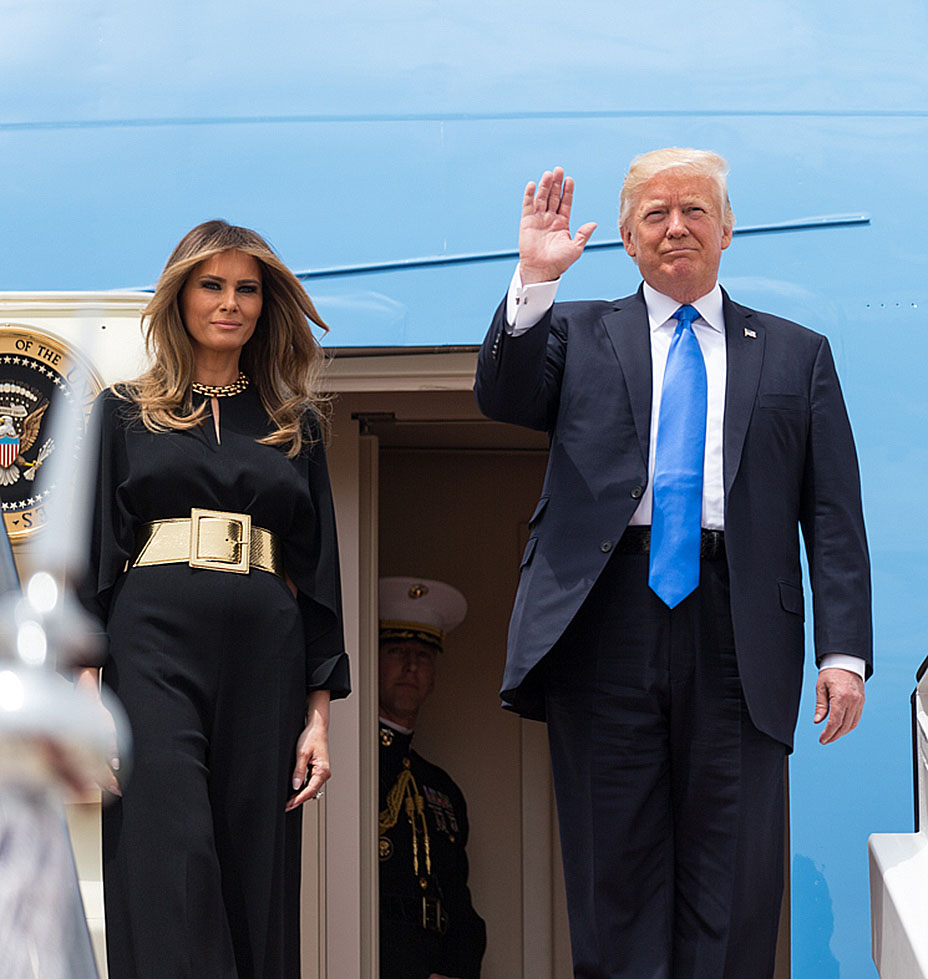 But what’s been more striking perhaps is what the first lady has worn in Saudi Arabia, where she is a popular figure who has been praised for her “classic and conservative” fashion choices. When she arrived on Saturday, she wore a black Stella McCartney jumpsuit and gilded gold belt so large, it resembled a prize fighter’s. At first, it seemed like an odd choice of something to deplane in, but in the context of the looks that followed, the superhero-like outfit makes sense on a couple of levels.

For their part in the trip narrative, where Donald Trump has been playing nice and condemning extremism rather than Islam, Melania and first daughter Ivanka Trump have been making appearances championing the kingdom’s recent strides in women’s rights, as modest as those may be. In doing so, the first lady has made some interesting wardrobe choices. When she visited a GE call center in Riyadh staffed entirely by women, she wore a militaristic-looking, olive drab Ralph Lauren shirt dress and zebra print pumps, looking like a feminist freedom fighter. Was she signaling how far the kingdom has come, or how far it has still to go? Perhaps a little of both. 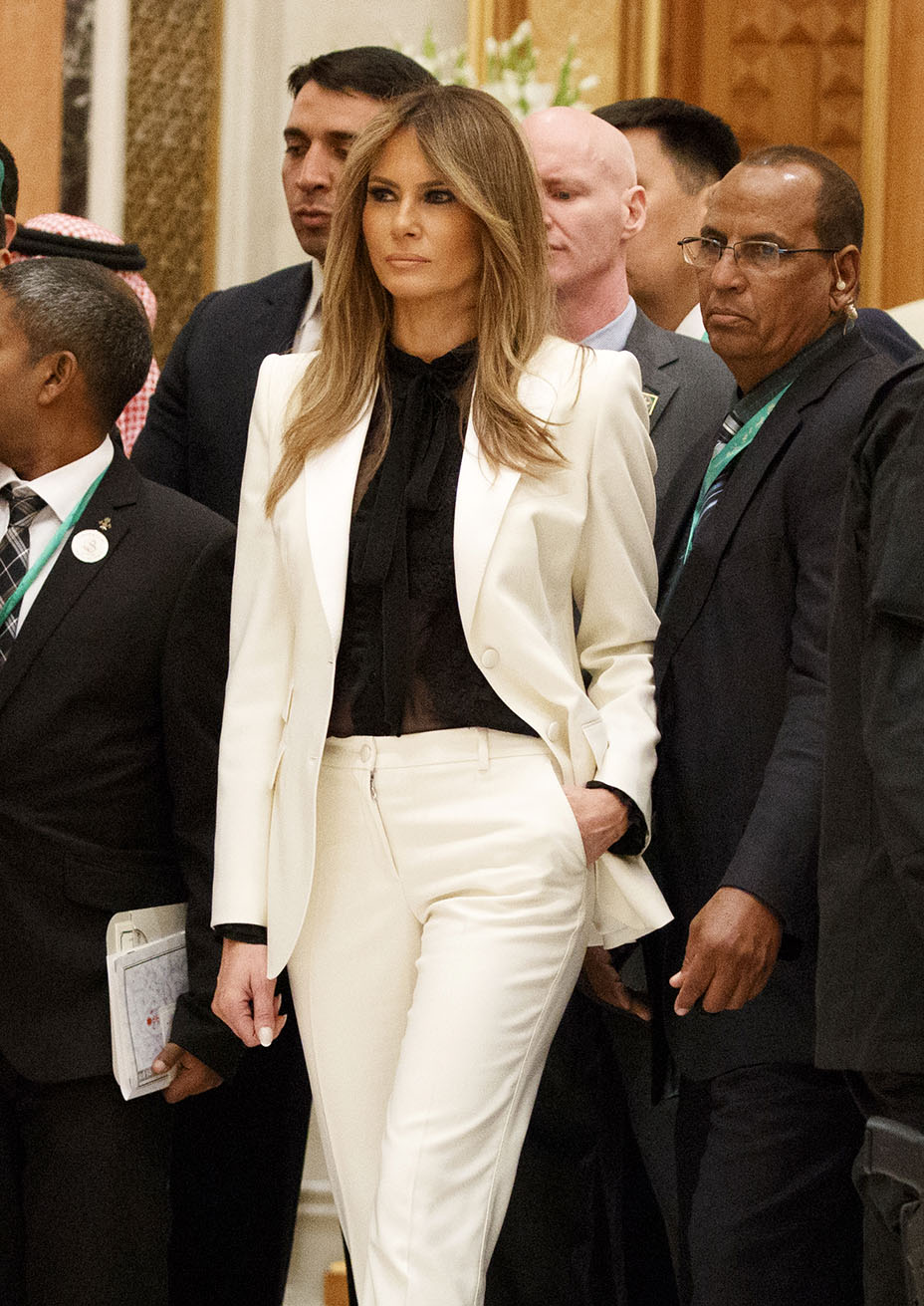 Later in the day, for the Arab Islamic American Summit, Melania changed into a tailored white pantsuit. Under Islamic law, male visitors to the kingdom are encouraged to dress conservatively, according to WorldBusinessCulture.com, which means suits and ties for business meetings, and women are encouraged to wear skirts, preferably ankle length. So the choice of a pantsuit is notable, maybe even pointed, suggesting that Melania wanted to convey that she had just as much a right to be in the room at the summit as any of the men. (That was not the case at the Saturday night Toby Keith concert, which was for men only.)

Overseas trips are historically a chance for first ladies and princesses to engage in fashion diplomacy.

Princess Diana was one of the best at the exercise, often paying homage to host nations when she traveled, including Saudi Arabia, where on an official state visit in 1986, she wore a cream column gown designed by Catherine Walker, embroidered with gold falcons, an emblem of the kingdom. She so charmed her audiences during that Middle Eastern trip, when she also visited the United Arab Emirates and Kuwait, that she became known as the Queen of Hearts.

Of course, the irony of Melania’s militant wardrobe is that Saudi Arabia, like The Handmaid’s Tale’s Gilead, is still one of the world’s most oppressive regimes for women. And she herself is in a precarious position to champion feminism, as the wife of a pussy-grabbing president whose policies are threatening Planned Parenthood and other women’s health initiatives.

There are also the rumors that she is unhappy in her marriage, rumors which resurfaced when she swatted away Donald Trump’s hand upon arriving in Tel Aviv today. Like Princess Diana, it seems that Melania could be a master at masking private distress. Perhaps her wardrobe has an even deeper meaning, one that suggests she herself is fighting something?