For the record, FX’s The People v. O.J. Simpson: American Crime Story and NBC’s This Is Us aren’t Sterling K. Brown’s first roles. So when people repeatedly refer to the recent Emmy winner as a new hit in Hollywood, “I just say, ‘Thanks!’ I know what’s been going on for the past 15 years!” says the actor. With a two-decade career onstage and onscreen, Brown understands the ephemerality of the biz. “If you haven’t done shows that are on everyone’s radar, then you’re something out of nowhere,” he says. “A lot of people weren’t checking on me the same way my family was.” Nonetheless, he’s grateful for the fans who have been following his trajectory. “On Twitter, there’ll be fans of Army Wives and people who say, ‘I’ve been following you since Supernatural, I loved you on Person of Interest,’ and it’s really cool to get that love. To them, I’m not just an overnight success.”

What was the most challenging part of the audition process for both O.J. and This Is Us?

There is a depth chart of talent that you go through, and if certain people are unavailable, then you get to what I like to call the “E list.” I already knew John Travolta was attached, Cuba [Gooding Jr.] was attached, so in my mind I thought they were making an all-star cast. I felt good about my audition and told my manager, “If they don’t look for a name, I got a shot.” And then it took another three months because I’m sure they probably looked for names. I went in for other pilots. I was shooting Whiskey Tango Foxtrot in New Mexico, and I was sitting in my hotel room thinking about that job being almost over, and how once it’s over, it’s back to pounding the pavement. And I was morbidly looking through IMDb at all of the jobs I had auditioned for and who booked them. I auditioned for Fargo, and I’m like, “Ah, Bokeem [Woodbine] got that job!” It was in that moment I got a call from my manager and agent that I was back in consideration for O.J. For This Is Us, John [Requa] and Glenn [Ficarra], the directors of the pilot, also were the directors of Whiskey Tango Foxtrot. I was coming into the room with a lot of cheerleading behind me, and that’s a great place to be. 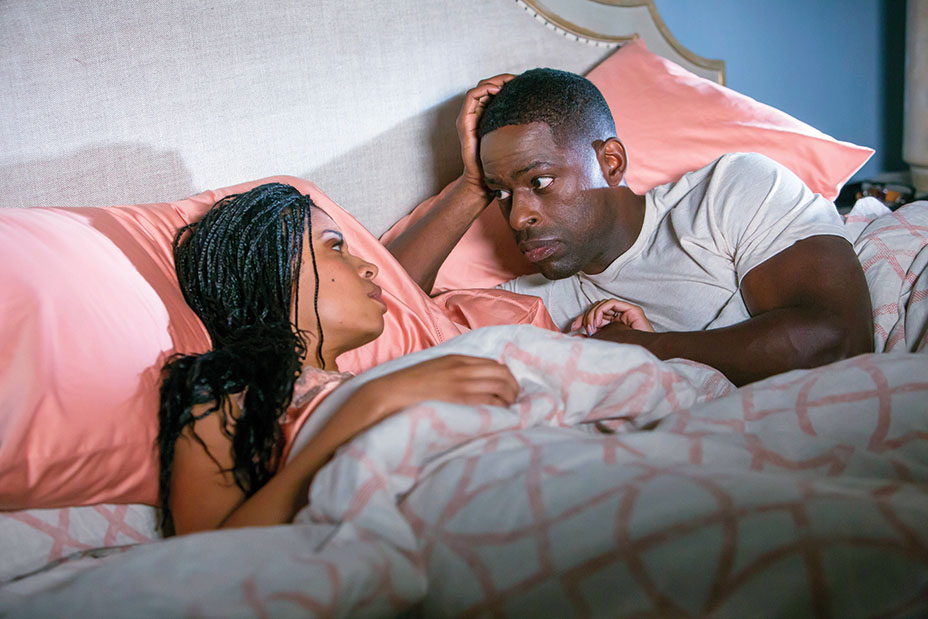 What are you most looking forward to audiences seeing for your character Randall on This is Us?

We’ll see the backstory of the relationship between Randall and [his brother] Kevin and why they haven’t historically been the closest. We have a couple of holiday episodes coming up for Thanksgiving and Christmas. Our Christmas episode is one of the best in TV — that is, if we, the actors, don’t mess it up! The script is so great. What happens in the script is that the format of the show shifts. It’s like six one-act plays, and each focuses on just one storyline. There’s holiday cheer, but it’s a complicated cheer because it wouldn’t be right if we didn’t try to make you laugh and cry at the same time. When I first read it, I ran up to the writer and [said], “Dude, you really killed this one.”

When you won your supporting actor in a limited series Emmy for O.J., the crowd went wild for you. What was that moment like?

I didn’t write [a speech], but I had an idea of some things I wanted to say. I wanted to thank my children, but I started hearing the music, so I ended with my wife. Ending with the wife is always good! (Laughs.) It was crazy because I had so many people tell me that I was a frontrunner, but until it all goes down, you have no idea what’s going to transpire. In my mind, I’m still this kid from St. Louis, Missouri, that nobody really knows. Everybody else, to me, is a much more well-known commodity. So I’m like, “John [Travolta] will probably win.” What I told myself was, “Celebrate whatever happens.” It was surreal! I literally felt like I was going to faint. The feeling of walking up on the stage and seeing the people standing up — talk about being overwhelmed with love. The fact that people really appreciated and applauded that this moment happened for me — I was speechless. 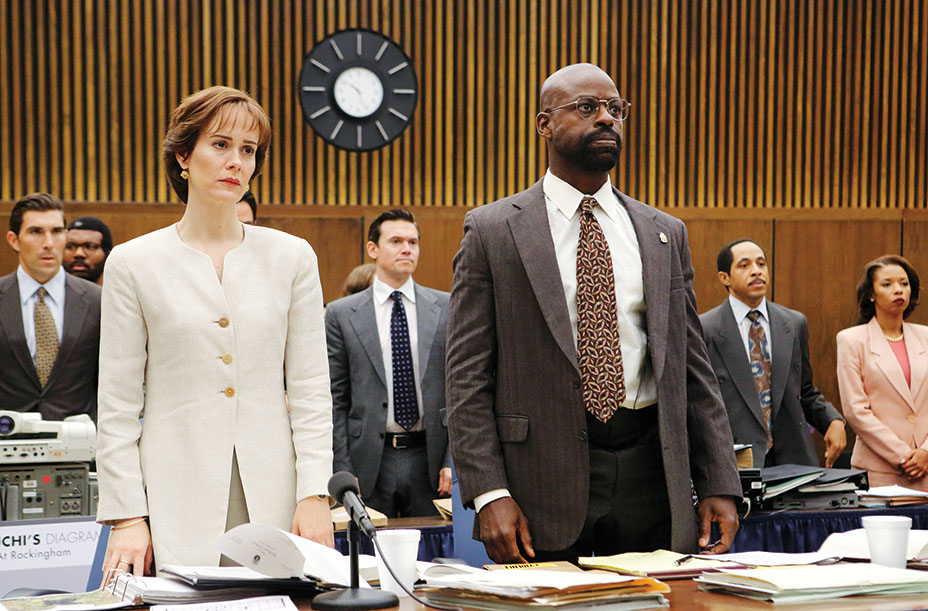 O.J. and This is Us have been well-received by critics and audiences. After decades working as an actor, what’s your reaction to landing these back-to-back roles that have resonated with audiences?

To be in the most fortunate position of having had these two roles back-to-back, that have given me the opportunity to show some of the things that I can do and have been received critically and popularly the way that they have, honestly I sound like a broken record, but I feel blessed, man! Not everybody gets this moment. I’m interested to see what happens next because I have no idea.

How important is it for an actor to experience acting on a stage?

A couple of my favorite actors are Don Cheadle, Jeffrey Wright and, may he rest in peace, Philip Seymour Hoffman. I’ve had an opportunity to see all of them onscreen and onstage. It’s easier to bring a performance down than to ramp one up. So for people that started on the stage, it’s easier to translate those skills to the screen. If you’ve only been onscreen and try to take that to the stage, it’s difficult. It’s like jumping into the deep end without ever having been swimming.

10 Actor Contenders on Their Biggest Challenges

You told me you have a passion for stand-up comedy. What would a Sterling K. Brown onscreen comedy look like?

(Laughs.)  I liked Californication. There’s a certain dryness to that humor that I gravitate toward. I did a sitcom for FX called Starved. It was a half-hour about people in New York City with eating disorders, and I played a bulimic New York City cop who would pull over bicycle delivery people on trumped-up charges, take their food from them, and then purge using my baton. It was real dark — don’t know why it didn’t last. (Laughs.)  I like dry, quick banter. It would probably be something written by Aaron Sorkin, but with a comedic sensibility.

What made you want to become an actor?

Growing up in St. Louis, Missouri, I was an athlete, a big football player. I loved it. And so the high that I would feel on the field was like nothing I had ever had before. Freshman year of high school I auditioned for the Troubadour’s musical production of Godspell. Freshmen normally didn’t make it into the show, so there was a part of me being competitive like, “Oh, freshmen don’t make it? I’ll go prove them wrong!” And my best friend wanted to do it and I wanted to do it because I thought it would be fun. We wound up getting in the musical and both had a great time. And here’s what it is: All three nights of the show we get standing ovations, and Saturday night in particular the play ends where you’re carrying Jesus Christ out off of the cross and we sing the song “Prepare Ye the Way of the Lord,” and as we’re carrying him out through the audience, the audience stands up before the show is even over and they just start applauding. They start going crazy. Me and my buddy get up onstage and take our bow and we say to each other at the same time, “We got to keep doing this shit.” I didn’t know you could experience that high without being on a football field or basketball court. Once you experience it you just want to experience it again and again. Really. As a 14-year-old boy you’re like, “I was just high. I want to get high again.” I don’t want to take anything. I want that high.

Queen Sugar   (OWN)
Three siblings make their way after their father’s death in this family drama from Selma director Ava DuVernay.

Better Things (FX)
Pamela Adlon plays a fictional version of her single-mom self, juggling three kids and her work as an actress.

Speechless (ABC)
This sitcom centers on J.J., a kid with cerebral palsy, played by Micah Fowler (above), who has CP in real life.

Gilmore Girls (Netflix)
It took only nine years for this limited series to materialize, much to the excitement of the original series’ loyal fans.

Fresh Off the Boat (ABC)
Going into its third year, the sitcom is based on Eddie Huang’s memoir of growing up with immigrant parents.

Black-ish (ABC)
The show delved into timely topics like Black Lives Matter. Its upcoming third season expects to do more of that.

Modern Family (ABC)
Now in its eighth season, this series opened the door for many of the diverse, multi-gen sitcoms that followed.

A version of this story first appeared in a November standalone issue of The Hollywood Reporter magazine. To receive the magazine, click here to subscribe.