Netflix CEO Reed Hastings caused heart palpitations in Hollywood on May 31 when he said he wants to cancel more of his original shows. “Our hit ratio is way too high right now,” Hastings told CNBC. “I’m always pushing the content team; we have to take more risks … because we should have a higher cancel rate overall.”

The comment was interpreted by some as a sign that Netflix, which has emerged over the past five years as perhaps the most prolific buyer of original content, might be shifting a strategy that has buoyed the entertainment industry. A day later, Netflix canceled the pricey sci-fi drama Sense8, a move that came a week after Baz Luhrmann’s ultra-expensive The Get Down was axed.

Yet rather than panic, Wall Street actually cheered Hastings’ proclamation, bidding the stock 2 percent higher over the next four days and ignoring the vast debt that Netflix has racked up ($3.4 billion) in pursuit of content. In fact, few analysts that closely follow Netflix believe the company will alter its strategy in the short term. It must spend like a drunken sailor to compete with TV networks — Hastings promises to dole out $6 billion this year — but also to maintain its lead over Amazon, Facebook and YouTube, all of which are entering longform entertainment video. “I think they’ll spend more next year than they will this year, and they’ll borrow more money to do so,” says Canaccord Genuity analyst Michael Graham, who has a “buy” rating on the stock, which has surged 23 percent so far this year.

Despite all the attention, Netflix now produces only 14 percent of its originals, while the rest, including Fuller House and Marvel’s Daredevil, are produced by others. Graham believes Netflix wisely is shifting that balance: Licensed originals will about double to 1,601 hours per year in 2025, and originals produced by Netflix will rise ninefold to 949 hours. While Netflix spends an estimated $3.5 million per content hour to produce shows (though The Get Down had reportedly escalated to $12 million an episode), Graham says Netflix “is generally smart” about spending. “They know exactly the demographic that is watching,” he says, “and know when [the target audience] stops watching.”

“Canceled originals are not failures,” adds Christopher Coby, an analyst with 7Park Data. “The rules are different for Netflix. Subscribers expect newness, they want it to feel fresh, and they like it when Netflix takes risks.”

So far so good, according to Barton Crockett of FBR & Co., who says 40 percent of U.S. consumers who have Netflix prefer it over traditional TV. He suggests Netflix could raise its subscription price — now between $8 and $12 a month — 5 to 9 percent without losing many of its U.S. subscribers, which Crockett estimates will grow from 51.5 million today to 61.6 million by the end of 2020.

But not everyone is enamored of Netflix’s spending spree. “They brag about what they spend on original content but never take any losses on canceled shows,” says Wedbush analyst Michael Pachter, who notes the service spends $4 per subscriber each quarter on original content.

Pachter predicts Netflix will capitalize the $6 billion it spends on content this year over five years, but he criticizes the company for not clarifying its plans. “If it expensed everything it spent, it would have lost $3 a share last year,” he says (the company reported that it earned 43 cents a share in 2016).

The analyst calls Netflix’s balance sheet “unfathomable” given that by 2020, he estimates, Netflix will have spent more on its content assets than Disney paid for Pixar, Marvel and LucasArts combined. 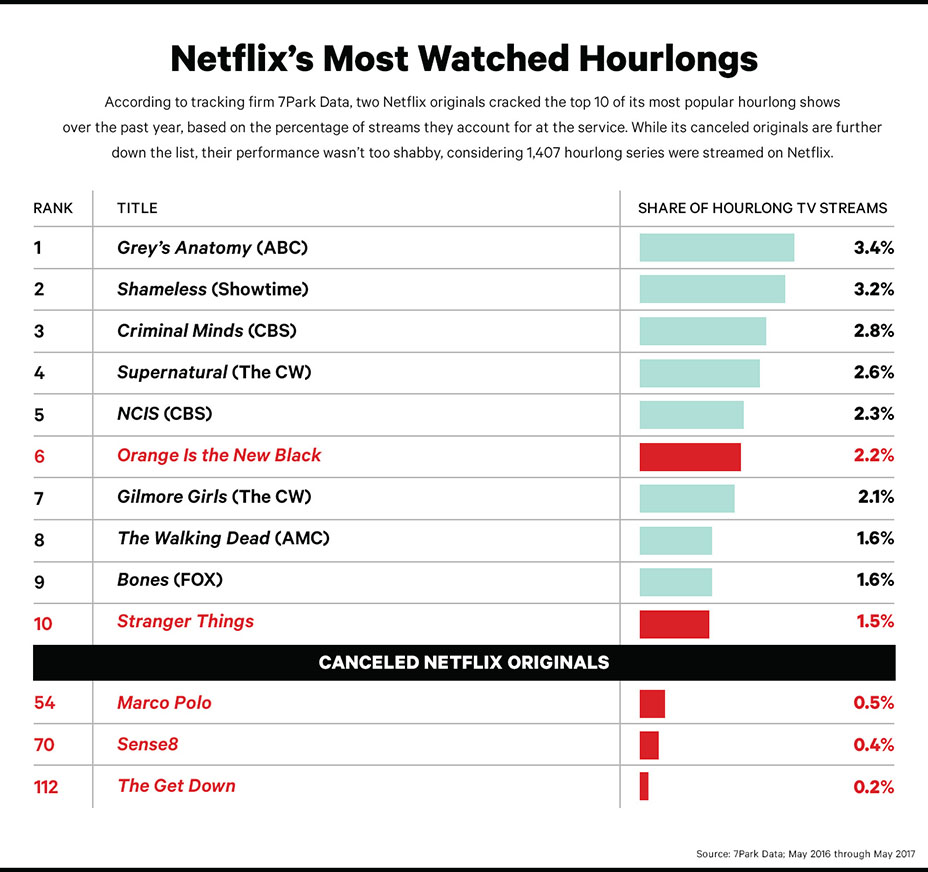