The fashion industry really wants you to wear white shoes after Labor Day and, in fact, into the fall. White shoes and boots have been everywhere on the runway this season, elevating bad taste to good. And you know what? They look pretty good, especially at Vanessa Seward’s show, where the vibe was ‘70s sex kitten, mirrored lips, teased ponytails and all.

Seward, who has a store on Melrose Place, is one female designer women look to for lessons in everyday French chic. She is becoming a bit like France’s Diane von Furstenberg, an icon to modern, self-confident women, including, apparently, Catherine Deneuve and actress-singer Lou Doillon, who sat in the front row at the Salons France-Ameriques amid the Baroque frescoes and chandeliers.

The fashion industry really wants you to wear white shoes this fall. And you know what? They look good. Here at #vanessaseward #PFW pic.twitter.com/AO0lBnmUBR

Seward went hard with the white-shoe idea, showing white ankle-strap sandals with sheer black stockings. She also offered a number of slouchy over-the-knee boots, fall’s other favorite new footwear, with leather culottes, ruffled floral minidresses, high-waist jeans and sweaters with snoods. Outerwear was also strong, namely a patent trench and a feathery green cape. And for evening, a Lurex jumpsuit, worn with a shoulder robed coat, was dynamite. Deneuve enjoyed the lineup so much, she stopped to thank the designer on the way out. 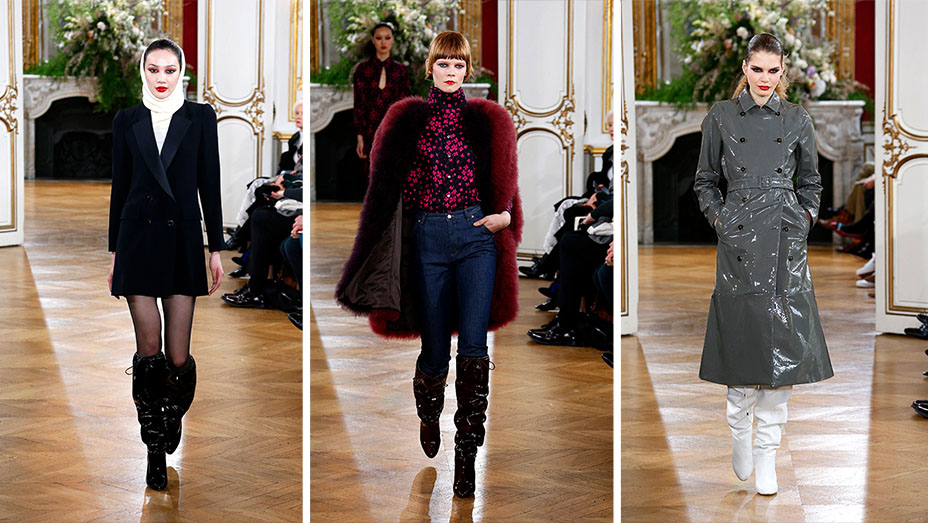 Isabel Marant also specializes in wardrobe workhorses with a twist, and her runway shows often crystallize trends that are likely to make it into your closet.

Maybe that’s why down-to-earth songstress Alicia Keys, beautiful as ever without makeup, came out Thursday night for Marant’s show, held in the courtyard of the Palais-Royal, where guests tiptoed past the Daniel Burden candy-striped columns to get to their seats.

It’s Alicia Keys on her way out of @isabelmarant #PFW pic.twitter.com/2SRlNK0YGa

Marant showed a masculine-feminine mix with this show cycle’s preferred soundtrack: David Bowie. There were a couple of relaxed, oversized blazers worn with pleated pants for the kind of power pantsuit that might actually work in real life and not look hopelessly retro. 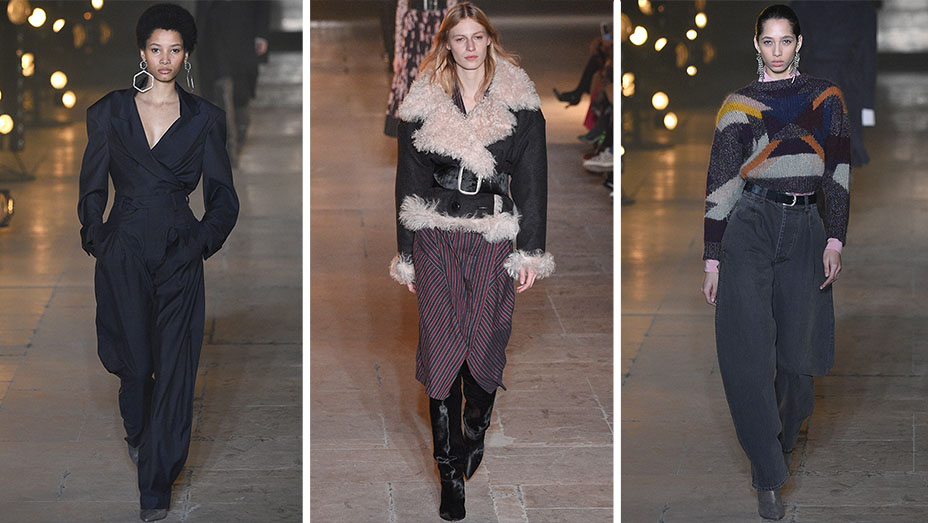 And somehow, her version of the pleated, full-leg pants idea appeared to be a manageable alternative to skinny jeans. She showed them belted with a fuzzy patterned sweater tucked in and with a striped men’s button-down shirt and wrap sweater on top.

In the mix also were easy floral dresses over slouchy knee boots and chic (yes, really) bejeweled jeans modeled by Gigi Hadid with a Lurex blouse (hasn’t been this much Lurex since the ‘70s) for a fun going-out look. Shearling jackets (another must-have here) rounded out the rich but accessible lineup.