No disrespect to the three very capable actors orbiting the star supernova in The Mother, but you can’t take your eyes off Isabelle Huppert. That applies whether she’s stretching her lithe frame like a cat across the sectional sofa, interrogating her possibly philandering husband with withering disdain, dancing like a pharmaceutically addled flapper in the coquettish red party dress she hopes to wear to his funeral or simply contemplating the cigarette she’s smoking, seeming to regard it as both stimulant and irritant. The great Huppert is such a uniquely fascinating stage creature she almost makes it possible to overlook the stiff mechanics of Florian Zeller’s psychodrama and its familiar structural tricks.

No International Oscar Nom for 'RRR'? Understanding That Submission Process

Adapted by the French playwright’s regular English translator Christopher Hampton, The Mother was written in 2010, two years before The Father, which won a Tony Award for Frank Langella in its 2016 Broadway premiere, and eight years ahead of The Son, which debuted in London last month.

This conceptual family trilogy deals with minds gradually denuded of reason as time, memory and equilibrium come unstuck. The Father examined the advancing dementia of an elderly man, The Son focuses on the chronic depression of an adolescent and The Mother looks at middle-aged emptiness in extremis. Zeller’s preoccupation with the cognitive slippage of unreliable narrators and its effect on those closest to them shows no sign of abating — his new play The Height of the Storm, transferring to Broadway in the fall with original London leads Jonathan Pryce and Eileen Atkins, again chronicles the deterioration of a man sliding into senility.

All the dramas are structurally designed to keep the audience as disoriented as their central character. There’s certainly no lack of cohesion in Zeller’s work, though compared to The Father, which more fully contextualized the character’s mental freefall, this earlier play feels both schematic and static. My main issue with Zeller’s writing — at least in Hampton’s versions — is the distancing nature of its aridly intellectual approach. It diminishes the pathos of situations fraught with feeling that will be all-too-real to anyone who has witnessed — or dreads — the similar decline of a family member.

Trip Cullman’s taut production for the Atlantic Theater Company does a fine job of dressing up the thin text with stylish design elements, dynamic use of video to mark the time shifts and playback repetitions, and an ambient soundscape by Fitz Patton that helps give shape to the play’s progression of jarring dislocation. The director’s supreme asset, however, is the transfixing sorcery of Huppert, an interpreter for whom fierce intelligence and insanity often are not mutually exclusive. (Her failure to win best actress in 2017 for Elle belongs on Oscar’s Worst Crimes list.) 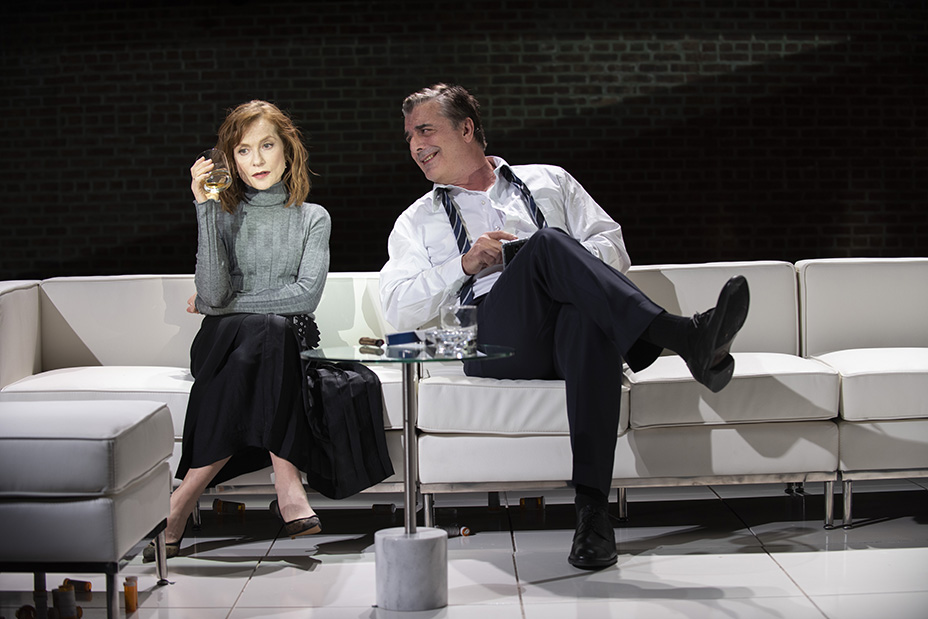 Is she the best possible fit for the role? That’s debatable, since icy hauteur comes more naturally to the celebrated French stage and screen star than vulnerability. But she makes her signature qualities work in a performance that can be described, without hyperbole, as fearless.

As the audience enters the theater, Huppert’s Anne is already seated, reading a book near one end of the ultra-elongated white sofa, the dominant feature of designer Mark Wendland’s clinical take on bourgeois domesticity destined for disruption. A white tiled floor and matching ceiling are suspended against the stage area’s bare brick walls, and among the few props is a bottle of wine and a vast collection of pill bottles littered about under the couch.

The play proper opens with a thrilling assault of needling passive-aggression, as Anne grills her increasingly flummoxed husband David (Chris Noth) about why he’s home so late, what was the nature of the meeting that delayed him at the office and whether it’s tomorrow that he’s leaving for a four-day seminar in Buffalo about microcredits. Returning to the same questions again and again while feigning blithe disinterest, Huppert spits out words like “seminar” or “Buffalo” (pronouncing it “Boofalo”) with a blistering scorn that conveys her refusal to swallow his deceptions — just as much as the more direct barbs she tosses in, like a knife thrower, amongst banal faux-pleasantries.

Some preview audiences have grumbled about Huppert’s thick French accent making her hard to understand, but I had no trouble. And making the character a foreigner in an American household effectively adds to her isolation.

While complaining that she’s devoted half her life to caring for two children — three, counting David — who now no longer need her and have left home either physically or, in her husband’s case, emotionally, Anne voices the lament of countless women caught in the classic homemaker trap: “I’ve been had all the way down the line.”

She’s not so bothered by the departure of their 23-year-old daughter Sara, off at college, whom she likens to her father: “Not very intelligent,” “Unsympathetic.” The latter charge is quite hilarious coming from Huppert, who arguably has never angled for audience sympathy in her entire career. Her admission of feeling “strangely repelled” by her daughter’s face at birth draws an uneasy mix of gasps and guffaws. 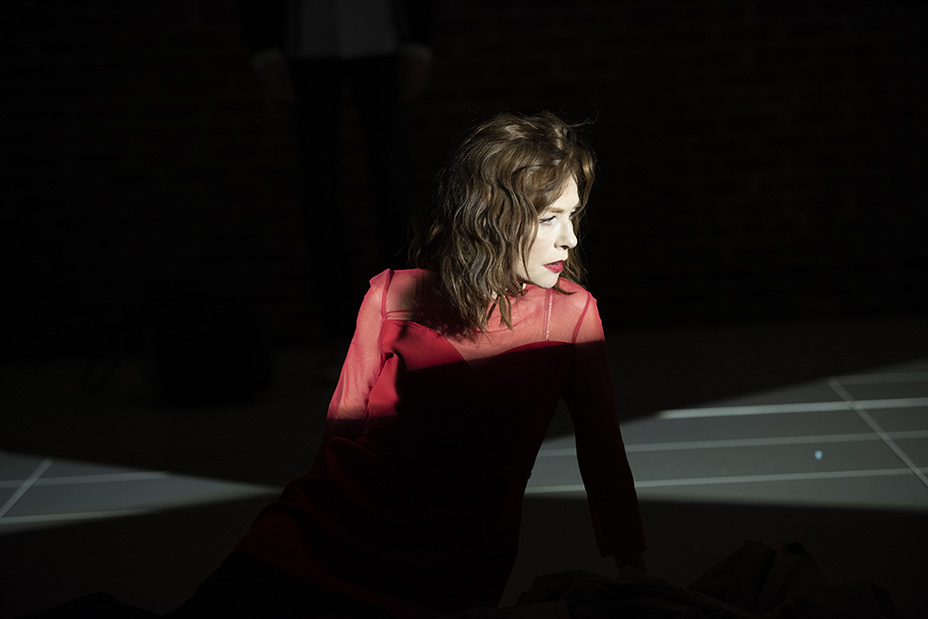 What really gnaws at Anne’s composure is the absence of her adored son, 25-year-old Nicolas (Justice Smith), whom she unhesitatingly identifies as her favorite in an early hint of the drama’s Oedipal subtext. An artist who views his father as “an anti-role-model,” according to Anne, Nicolas lives with his girlfriend Emily and sometimes takes a week to return his mother’s calls. But when he turns up at the family home one night after a fight with Emily and emerges sleepy-headed from his room the next morning, Anne caresses his bare torso with the ownership of a lover. That’s nothing, however, compared to later, when she’s full of pills and wine and starts grinding away on top of him. Oh, les français!

Noth and Smith make more robust impressions. Their interactions veer between those of adversaries and allies as they attempt to handle Anne’s increasingly unpredictable behavior, while Zeller replays the action of consecutive days more than once, re-examining key moments from different angles. How much of this is actually happening and how much is being filtered through the distorted perceptions of Anne’s mind as she retreats further from reality becomes a blur. But this is a gambit the playwright used with greater sophistication in The Father. Here, it remains compelling primarily for Huppert’s perilous high-wire act.

The actress looks sensational, model-thin and beyond chic in Anita Yavich’s elegant opening costume of gray sweater, sleek black wool skirt and heels, then later rocking that kicky red cocktail dress — with stockings and a garter belt, no less. She appears ageless and indestructible, which goes a tad against the grain of the play.

But her dismantling is visceral and cruel. There’s haunting poignancy in her recollection of the morning ritual of preparing the children’s breakfast, then walking them to school, eventually wondering, “What was all that for?” The Mother might often play more like a virtuoso theatrical stunt than an emotional gut-punch, but Anne’s pathetically reduced state by the end sends chills down the spine. Huppert vastly outshines the material, to be sure, but watching a consummate artist execute even a transparent dramatic exercise such as this one can be mesmerizing.