Among the first-time Oscar nominees we’re excited to see on the step and repeat on Feb. 26, French actress Isabelle Huppert is most certainly a fashion frontrunner.

Nominated for her role in psychological thriller Elle, she’s been a longtime muse for the fashion industry, having modeled both on the runway and in front of the camera for ad campaigns. Huppert is also a front row regular at Armani, Chanel, Givenchy and Louis Vuitton.

Her most recent red-carpet turns included a divine Dior gown, designed by Maria Grazia Chiuri, at the 22nd Lumieres Awards; a sky blue Armani Prive gown with an embellished bodice and sleeves at the Golden Globes (where she won best actress in a drama); and a velvet long-sleeve patterned gown by French designer Herve Leroux at Chopard’s The Garden of Kalahari event. 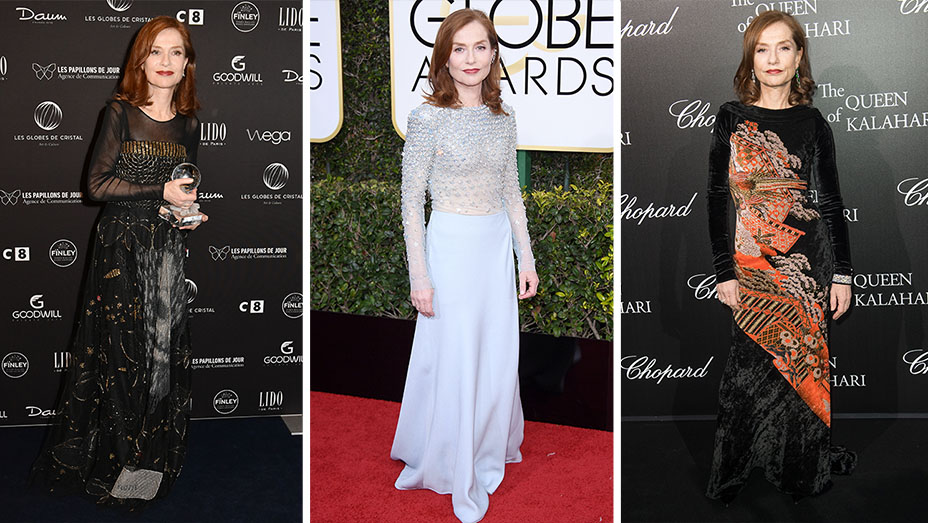 Of course, the 63-year-old doesn’t pull off her red-carpet wardrobe without some help. Enter: Paris-based super-stylist Jonathan Huguet.

The French-Spanish wardrobe wizard first started working with Huppert at last year’s Cannes Film Festival, where he styled her in a bespoke emerald Chloe gown featuring an open-neck crepe blouse and an ankle-length skirt that included a tuxedo silk satin waistband that cinched her waist. “It was the start of our collaboration,” Huguet tells The Hollywood Reporter over the phone.

“What I like about Isabelle is that she’s a fashionista, she knows the brands and designers,” he says. “She’s completely open to different things, like more underground designers. She’s happy to try different shapes, fabrics, designers.” One of those “underground designers” is Haider Ackermann (who was appointed the creative director of Berluti last September), says Huguet. 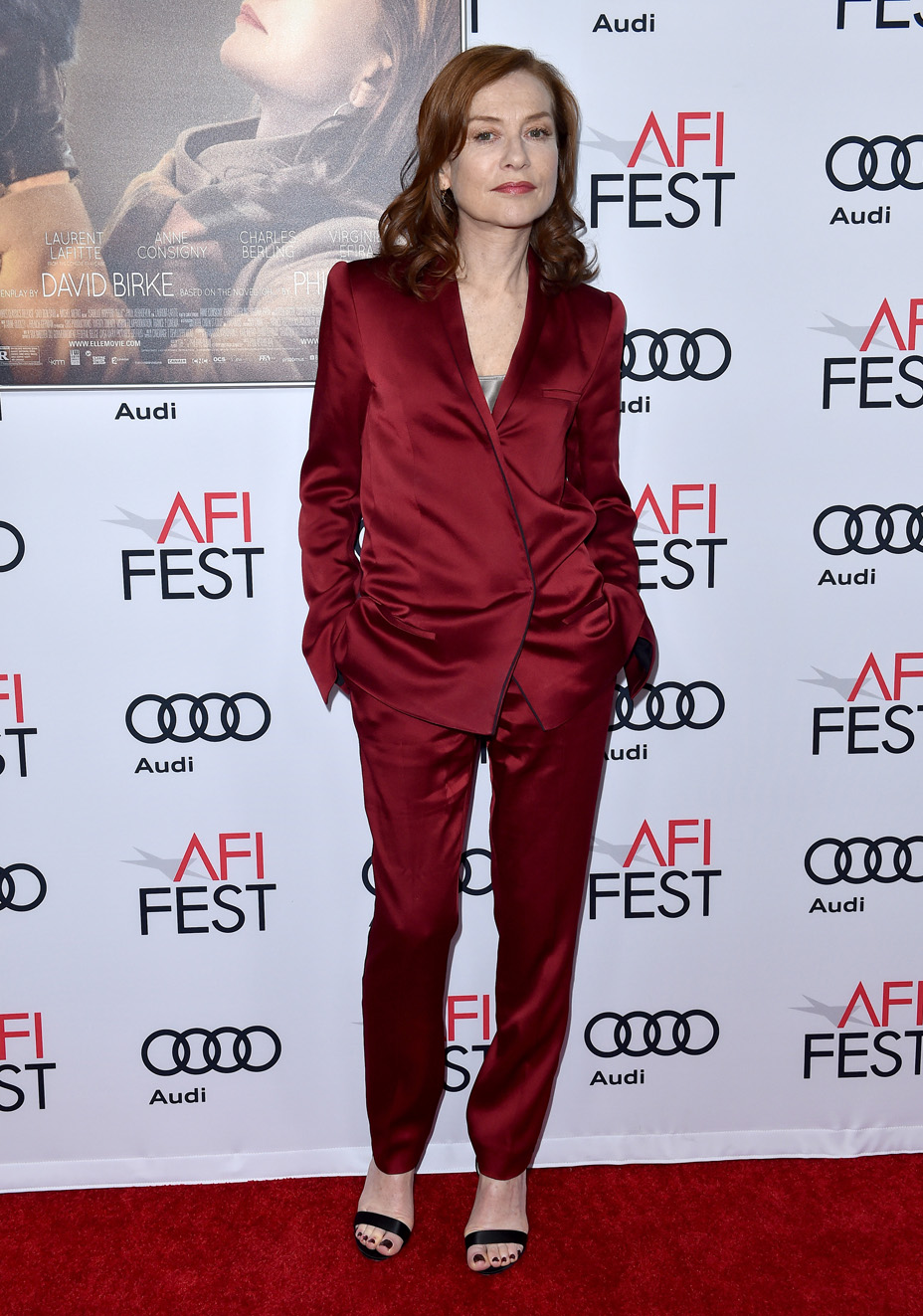 “He has a good balance between masculinity and femininity,” Huguet says of the Colombian designer’s sculptural creations that have long been a favorite of Tilda Swinton. Much like Swinton, Huppert favors powerful looks — and power suits, too.

“It’s not unusual for her to have this boyish style because she’s really close to houses like Armani, and Armani loves to play with the masculine wardrobe on women,” he says of Huppert’s penchant for pantsuits. “She takes men’s suits and puts it in her own way.” She most recently attended the spring 2017 Armani Prive couture show in Paris in a standout shiny blue pantsuit. 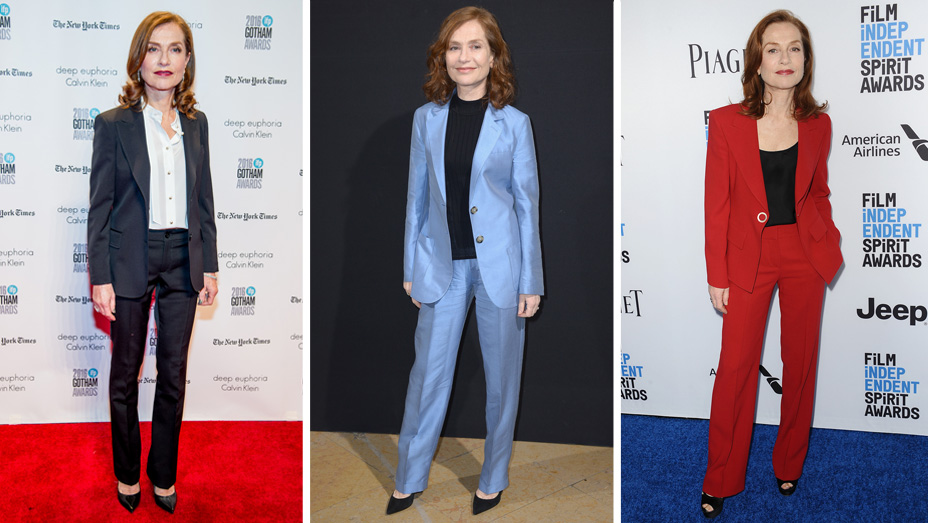 The duo also collaborate on editorial features, recently working together for the cover shoot of The Travel Almanac, in which Huppert is seen with long curly red hair, and Buffalo Zine, where she’s posing at a laundromat.

“We love to shoot for underground magazines. She’s always into edgy things and playing different roles. And that’s super-exciting to me because I can put her in different situations and she’s always like, ‘OK, let’s do it’ — she’s not afraid of anything,” shares the 31-year-old stylist.

Huguet — who studied at Supemode, a fashion design and business school in Lyon, France, where he was born and raised, before moving to Paris 12 years ago — says his obsession with clothes first started with his mother.

“My mother was really — there’s a French word, coquet. She was always in skirts and heels, always shopping. After school, it was like ‘let’s do shopping!’ I was always surrounded by women, including my grandmother,” recalls Huguet. “I think they gave me all my sensibilities about fashion and women.”

Now, Huguet continues to be surrounded by the ladies, as he counts some of the biggest French actresses as clients, including Huppert, Juliette Binoche and Charlotte Rampling. He’s also worked with Catherine Deneuve, Charlotte Gainsbourg and Lea Seydoux on editorial photo shoots.

With Huppert, the stylist finds that “it’s quite easy to find a balance” when dressing the Golden Globe winner because he “can put a lot of things on her. She plays a lot of characters [in her movies], and I think she likes to do that with fashion and her clothes, too.”

Huguet’s next styling project with the actress will be for the BAFTA Awards in London on Feb. 12 and then the Academy Awards on Feb. 26. What can we expect for the Oscars?

“Everything is quite confidential, but we’re working on something iconic yet modern with the house we’re collaborating with,” he mused. “Isabelle is an icon, but at the same time, she’s always searching for something modern and fresh — and French.”

12:50 p.m., Feb. 6: This post previously stated that Charlotte Gainsbourg was one of Jonathan Huguet’s clients. It’s been updated to reflect that he’s worked with her on editorial photo shoots, but doesn’t regularly style her for the red carpet.