Sure, it’s a dream come true to co-create, co-showrun and star in an HBO comedy based on your own life, but it’s also a bit of a mind-bender. “So many actors have the luxury of just going in to play a part, and I just feel like I know too much sometimes,” says Insecure’s Issa Rae with a laugh. “I wish I could turn my brain off!”

The 33-year-old Golden Globe nominee, who is in the middle of shooting the third season of the series, took a break to talk with THR about where she draws inspiration for storylines, the handful of projects she’s developing with HBO and what to expect from Insecure’s third season.

What was it like going back for the second season after breaking out in the first year?

We were starting the second season the day after our finale premiered and so we were just hitting the ground running. We were just so excited by social media feedback and people being so into the show that we were all invigorated by how much people were invested in the show.

What’s the most challenging part of starring in the show that you’ve also created?

Having answers for everything and having to take all of the responsibility. As a creator, you think you’re just going to create, but there are so many moving parts and so many business aspects. So having to be business-minded while trying to be creative and not care what is going to sell is a lot. Sometimes I want to be in actor mode, not producer mode, or vice versa.

Do you sometimes want to just act on a project and not produce or write?

My [latest] role [in October’s The Hate U Give] was my first time doing that, and I was like, “Whoa, I don’t have to be here after my scene is done? I can just leave? I don’t have anything to do with the decisions? I have time in my trailer to just chill until they need me?” That was just crazy to me [but also] really cool and made me want to do that again. But conversely, I was like, “Oh, I didn’t write this, so I don’t really know these lines, so I need to study!”

What themes do you want to explore in the next season?

What else can you tease about season three?

This season is about adulting in a new way. I think we’ve watched our characters really fumble and fuck up — and in some ways in your 20s you are allowed that — but this season is about not acting like you’re naive anymore or that you don’t know better. So it is about, what does it look like to know better and to do better? 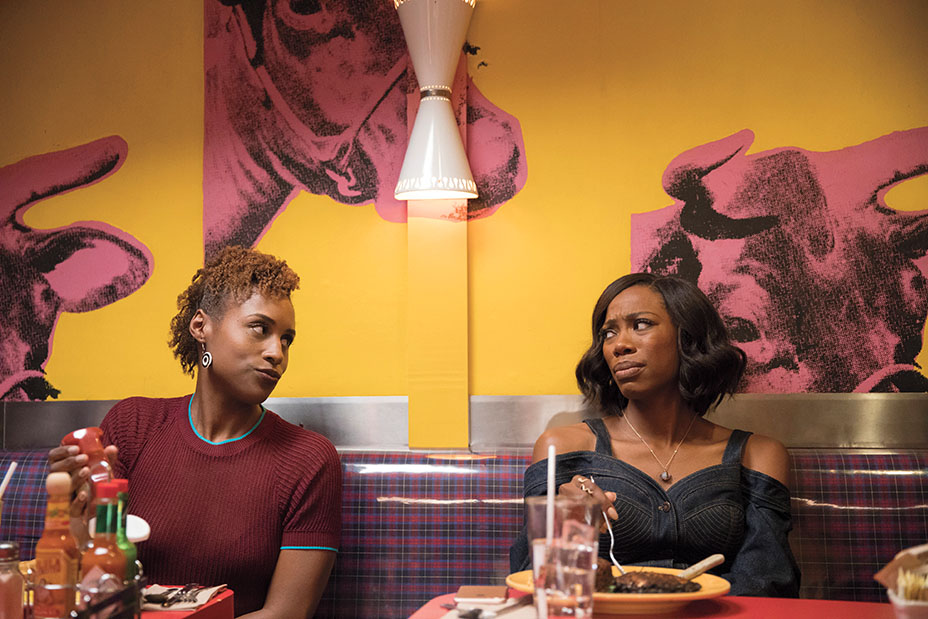 Where do you draw inspiration for storylines in the show?

I’m definitely mining experiences from my own life, especially for my character. And then we tap into the lives and instances and moments a bunch of our writers bring to the room, as well. I think that’s a fun part — everybody has a piece of their life in the show.

What’s the latest on the projects you have in development at HBO?

HBO likes to take their time, and I’m also taking my time with Insecure, so they’re all in different stages. None are casting yet. But there’s Him or Her, which is a comedy by Travon Free about a black bisexual man navigating dating and life. And there’s a show by Angela Flournoy, who’s an author I love, and it’s a ’90s project about a black family living in L.A. And my next project is one called Sweet Life that I’m co-writing about teens basically living in black Beverly Hills. It’s kind of like a black 90210 but not.

Netflix just signed Ryan Murphy and Shonda Rhimes to nine-figure deals. As a creator, what impact do you think those deals have on the industry?

I’m thinking that broadcast networks are the only ones who are shook. They’re probably like, “Wow, we need to listen to our creators and maybe not ban certain episodes from television that they’ve worked so hard to produce and make to tell their truth. [Rae is referencing a politically charged episode of Black-ish that both ABC and creator Kenya Barris have said was pulled from the schedule by a “mutual decision.”] Maybe we should adopt a model of being creator-friendly and writer-friendly.” I don’t know if that can happen if you’re constantly catering to advertisers.

What do you think about broadcast?

It’s so interesting seeing so many networks reverting to a time when audiences just appreciated a specific type of show and a specific type of voice, and so many of them are like, “Let’s reboot the ’90s when everybody watched everything that we put out, and who cares about auteur-drive content!” It feels like their equivalent of movies doing these big blockbuster hits. And if anything, with these big deals, Netflix is like, “OK, y’all do that and we’re going to focus on the good shit.”

What shows are you watching?

Unfortunately, I haven’t had a chance to watch anything on TV this year at all, even my favorite shows like Atlanta. I haven’t even finished The Chi yet, and I haven’t gotten a chance to see Grown-ish.

How have you adjusted to your new fame in the past few years?

My life hasn’t changed that much. If anything, I say it feels like I’m popular in high school where it’s like, “Oh, I know you.” But I don’t consider myself famous by any means. I’m not Rihanna or Beyonce, you know? I can walk into a grocery store just fine.