It was Andy Muschietti’s birthday.

He had to work all day on that Monday, Aug. 2, with a schedule that pushed him straight from a packed junket in the morning to the It: Chapter Two premiere at the Regency Village in Westwood by sunset. Steps away from landing at the top of the carpet — red would’ve worked, but it was replaced by a more mood-setting black — Muschietti celebrated turning 46 by grabbing a prop bicycle and cruising half a block down the line, past the waiting press and photographers. He stopped in front of a group of fans cheering him on from behind what looked like a set piece from inside a Pennywise-haunted sewer. He then turned around and rode back to the beginning.

“I wasn’t planning on it,” the filmmaker explained to The Hollywood Reporter moments later about his casual ride. “I had one of those moments. I didn’t take my medication.”

Perhaps less amusing but an easier explanation to swallow is that Muschietti arrived ready to kick up his heels and toast the closure of a five-year chapter in his life spent translating Stephen King’s classic 1,138-page horror novel for the big screen. The first installment became a global phenomenon, grossing more than $700 million worldwide and fast-tracking a sequel. It: Chapter Two picks up 27 years later as the lovable band of Losers are now adults who must reunite to face their demons and once again defeat the shape-shifting Pennywise.

“We really wanted to keep the dialogue between the two timelines,” explained Muschietti’s producing partner and sister Barbara Muschietti. “It was a challenge to manage this production as a whole because we knew that Chapter Two was a lot more ambitious. We had a lot more material to cover as the first film [represents] about 300 pages of the book, while the second is closer to 900 pages.”

Gary Dauberman is pretty much the expert on what ink is on those pages. He wrote 2017’s It (with Chase Palmer and Cary Fukunaga) and is the sole credited writer on Chapter Two. Aside from King, of course. “The book is so beloved and it’s so personal for a lot of people. For me, it was my gateway into adult horror, adult books so I have a very personal experience with it,” he said. And that did not make it any easier in trying to trim it down. “The challenge becomes you can’t include everything, so what are we OK losing? You try to jam everything in there as much as you can, but then you have to find the movie.”

Dauberman said the “no-brainer” scene was perhaps one of the most brutal to watch. When King was writing the novel in 1984, a gay man named Charlie Howard was killed by a group of teenagers in King’s hometown of Bangor, Maine. He used the story as inspiration to craft a character named Adrian Mellon, who is similarly attacked by a wild pack of young men following a carnival in Derry. Filmmaker and sometimes actor Xavier Dolan stars in the scene opposite love interest Taylor Frey.

“Clearly, that’s how we are going to launch into the movie,” Dauberman noted. “The unfortunate aspect of that scene — and I wrestle with this a lot because King wrote this novel in 1983 and 1984 — is that is still going on today. It’s timely, and that is really unfortunate. That scene encapsulates so much of what Derry has been dealing with for 27 years since It has been in a slumber or a sleep underneath the town.”

It was an important scene for King to have in the book, hence why Muschietti wanted it in his film. “It was an event of real life that completely shocked Stephen King as he was writing about something that he was also thinking about — the underlying evil of real people on real communities in America. For me, its relevant to the times we are living in now,” he said. “Life is made of all of this — brutal things, violence, horror, fear, humor, love. Stephen King is known for swinging tones and I grew up reading his books. He’s a teacher for me in how to tell a story.”

Dolan said he loved Muschietti’s work on the first film so much — he even praised it on Instagram — that it was an easy ‘yes’ to join the cast, despite the challenging material. Also tough: Dolan says that one of his gay friends just suffered through a vicious hate crime attack outside a bar in Montreal: “It’s unbelievable that it’s happening everywhere around us still. Adrian Mellon is a very important character in this story and, for fans of the book, it’s a character who means a lot.”

The cast got their first chance to really dig into their characters during a table read that brought together the entire team, marking the first time the younger actors got to meet the actors who would be playing them as grown-ups. For many, it was their favorite experience of the entire production because if offered a chance to explore every beat of the material. And to see what they might look like in 27 or so years.

Recalled Chosen Jacobs of that day he laid eyes on Isaiah Mustafa: “I was like, OK, I look pretty good! I hope I look like him one day.”

“It was kind of surreal,” recalled Jay Ryan. “It was the only moment when we were collectively together like that as a cast. For us, as the adults, it was really great for us to hear the nuances in the kids’ read. It gave us a little bit of extra [weight] to take into filming. Andy he’s a real creator of a family atmosphere. He and Barbara make incredible films together and they want it to be family. That experience really helped with that.”

The actor who plays Ryan’s younger version, Jeremy Ray Taylor, said it was one of “the best moments” he had. “I’ve never had an adult version of myself, so that was a little nerve-wracking.” For Ransone, he was stoked to see all the pages. “They were so secretive about the script, so that’s the first time that we, as a cast, were all able to read the entire thing. It was crazy awesome. I just felt good any time that I got a laugh.”

He got more than a few inside the theater as did Bill Hader, who said that when he first sat down with Muschietti to discuss the project, they bonded over classic horror films. “We have similar tastes so we were, like, ‘Yeah, let’s do this.’ We talked about Evil Dead a lot. We talked about John Carpenter’s The Thing, which we have a reference to in the movie. Mostly those kind of late ’70s, early ’80s monster things,” he said. “People love a good story, and [Stephen King] is a really good storyteller.”

Composer Benjamin Wallfisch also praised King’s storytelling skills, saying there’s so much more to the material than the scares. “It’s a really powerful coming-of-age story. It’s also about how trauma can affect you 30 years on,” he said. But it’s also about a murderous clown. “Pennywise, this shape-shifting entity, is vengeful but there’s also this crazy contrast because he actually missed the Losers. The key thing, for me, was to have a score that sounded like it, too, had been around for 30 years and changed and evolved and become more complex.”

Wallfisch worked closely with Muschietti to explore those layers. “He’s a total genius and a true visionary filmmaker who is also an incredible musician. He really understands what music brings to a movie. He loves emotion, he loves visceral storytelling, and his approach to music is that it’s a partner in the process.”

Muschietti had many more partners in the process of making It: Chapter Two. The first film raked in all that revenue from a reported $35 million budget. For this installment, he reportedly had almost double that amount — and it shows. “It’s bigger in every aspect,” explained actor Nicholas Hamilton, who plays the troubled Henry. “There’s more stars in this movie, there’s more money behind it, so they can basically do whatever they want. The first one was so successful that they could basically go on set on this one and go, ‘Let’s fuck shit up.’ It’s great.”

For Martell, who plays younger Bill, he said the experience gave him something money can’t buy — “incredible friendships” he will have for life. Same for Wolfhard: “They are all my best friends now.”

After everyone had wrapped up their interviews and made their way inside, those best friends gathered in the front of the Regency Village Theatre audience to present their collaboration for hundreds of horror hungry movie-lovers. But not before Chastain led the crowd in singing “Happy Birthday” to Muschietti.

There is no word on whether he went home with that bicycle, but Barbara did tell THR what she got her brother for a gift for his 46th. “I got him adult suitcases, because we are traveling a lot,” she said, with a smile. “And I also got him this freaking amazing premiere!” 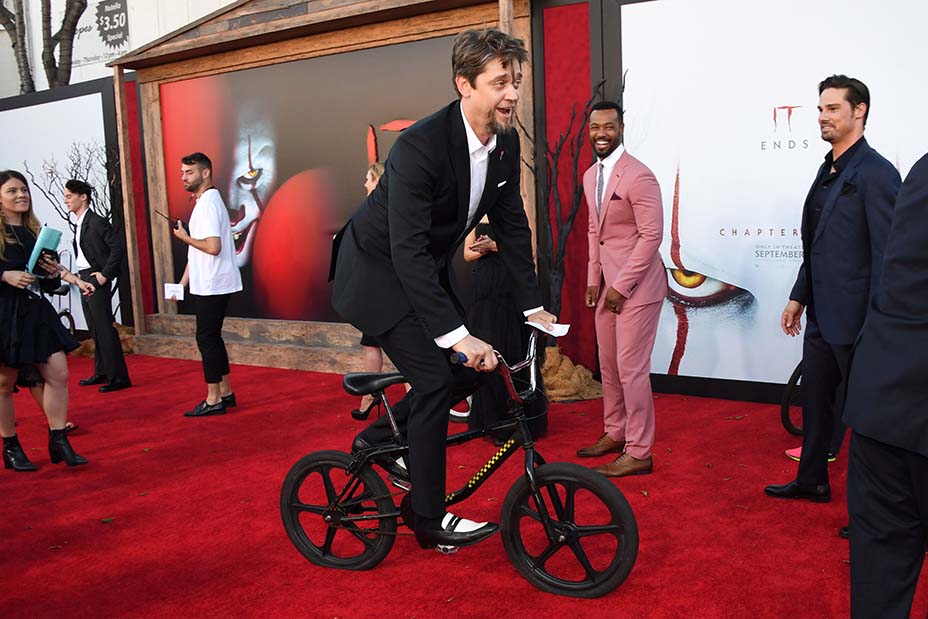 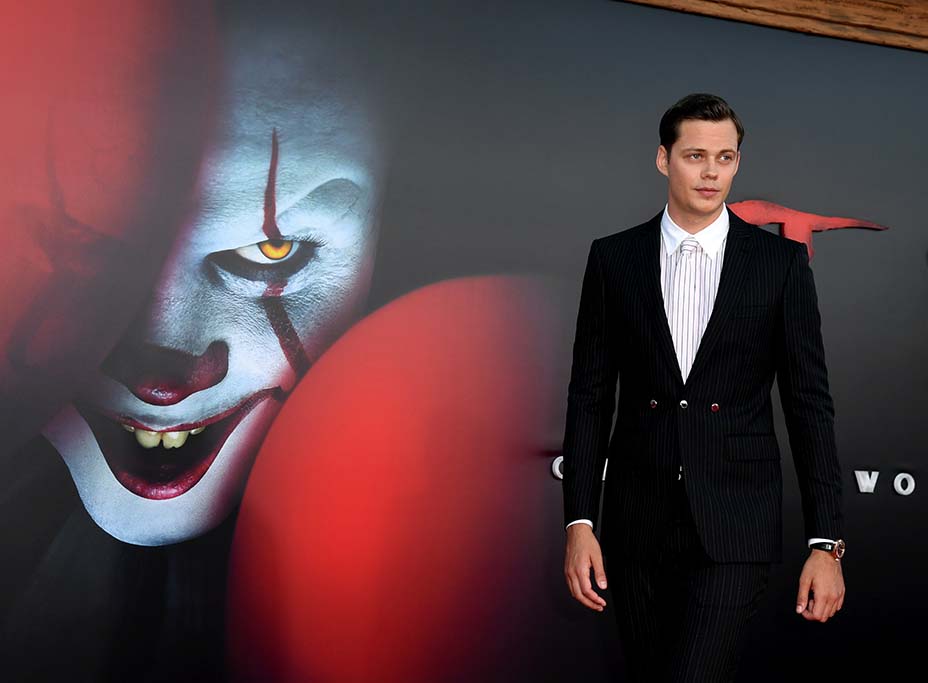 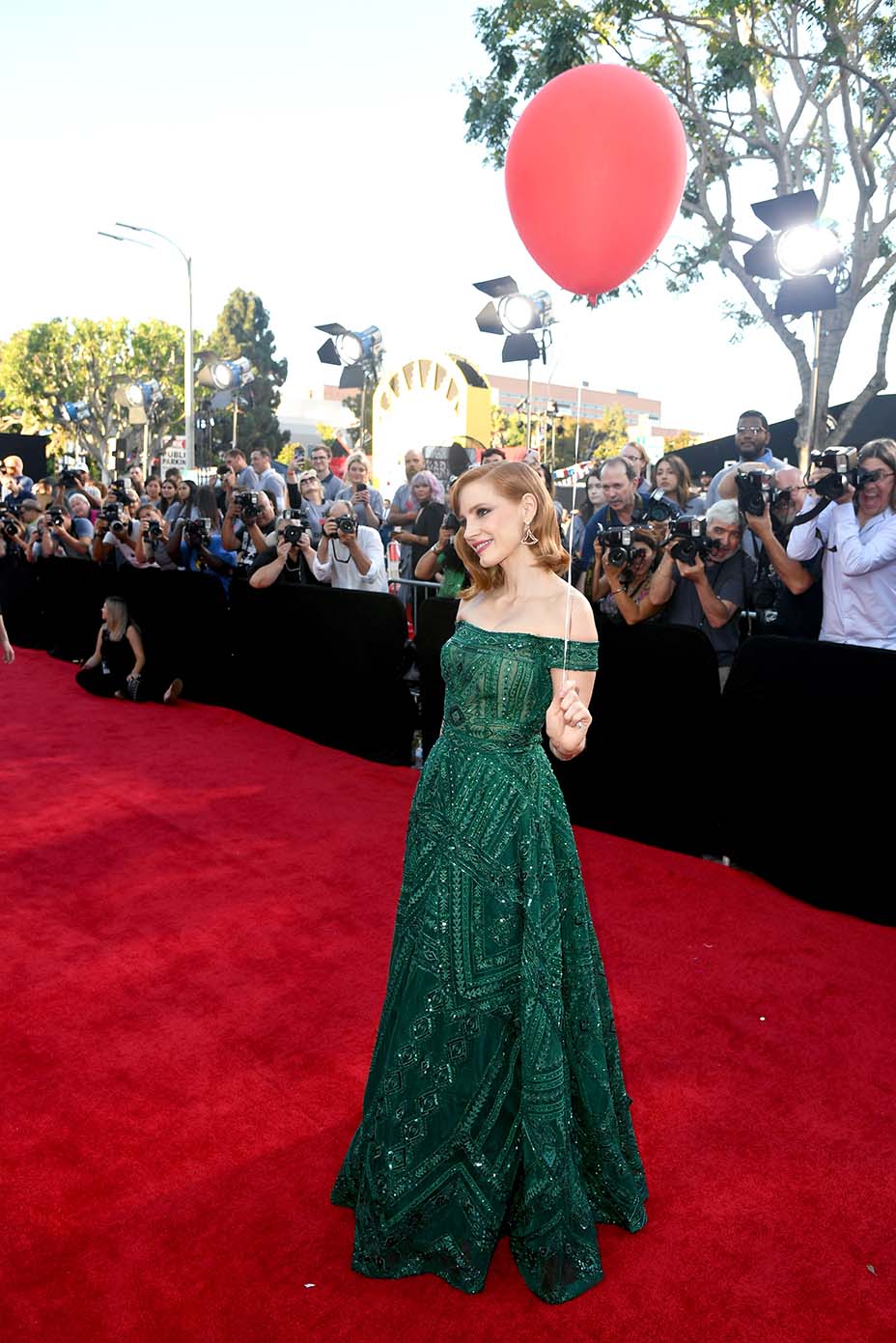 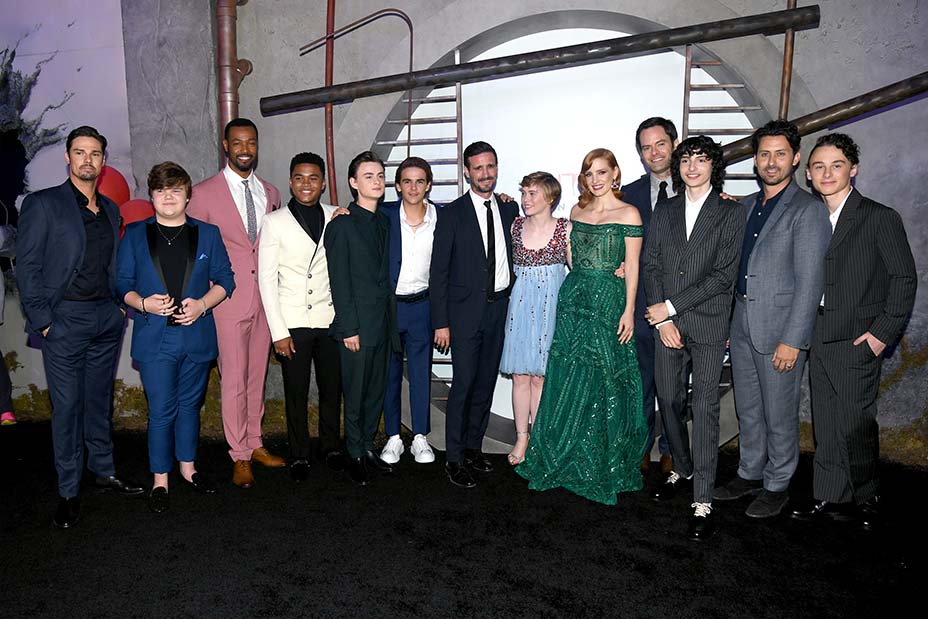 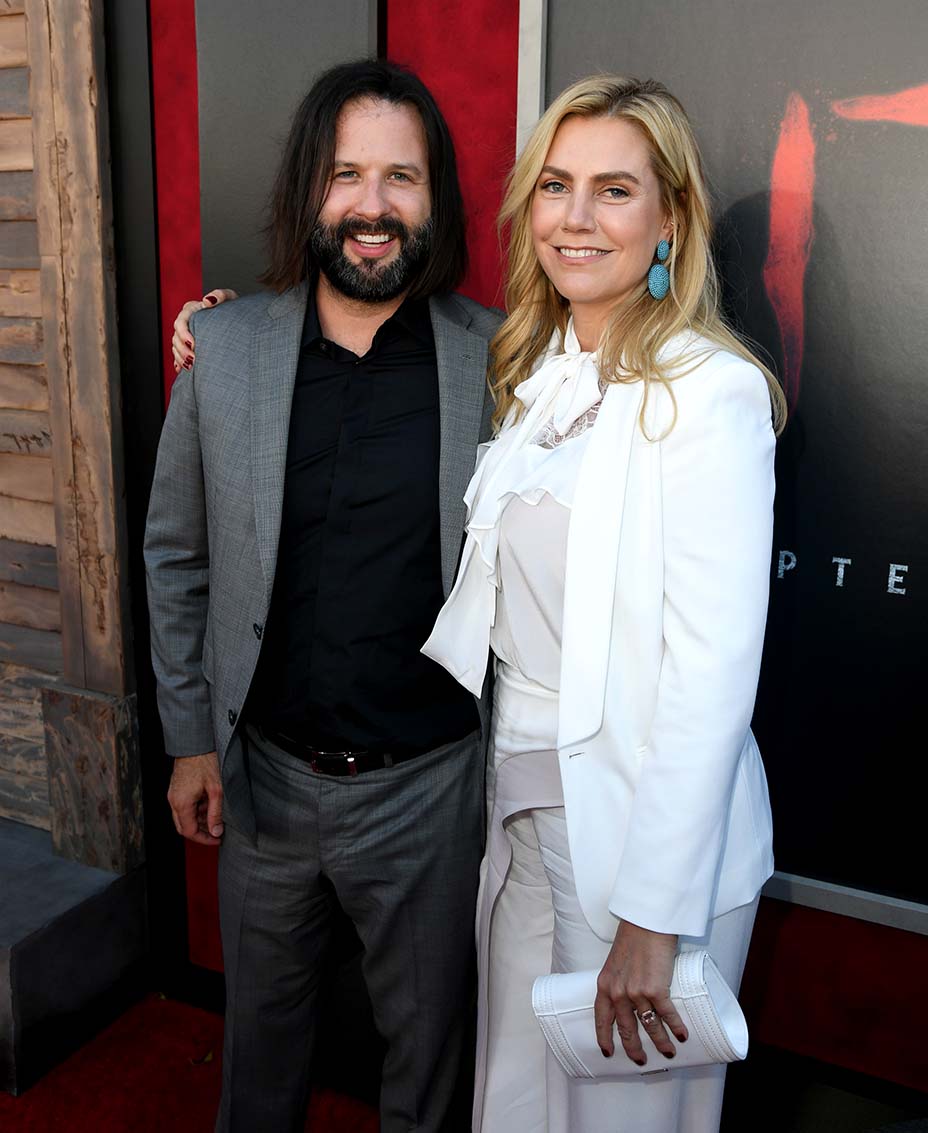 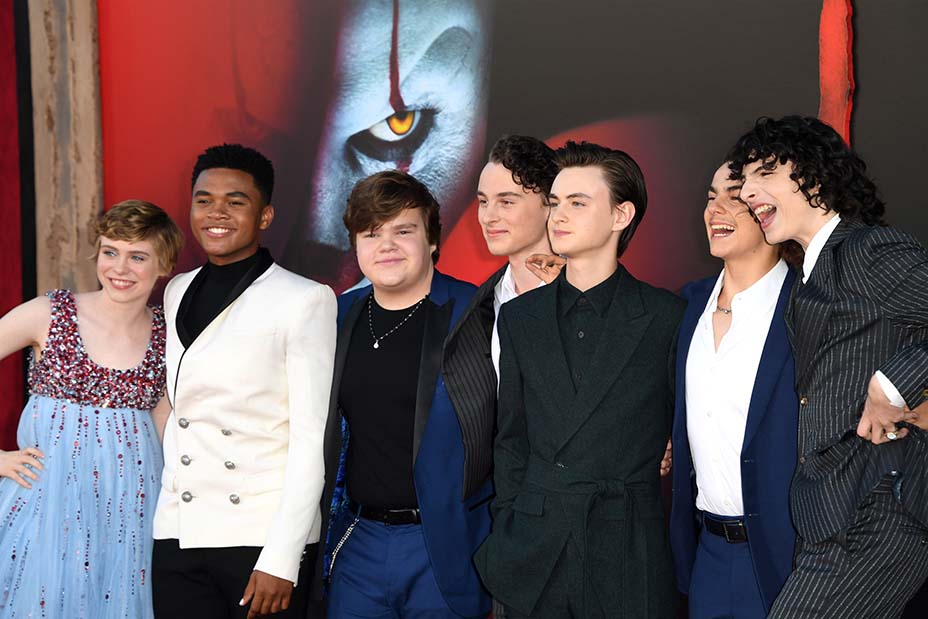 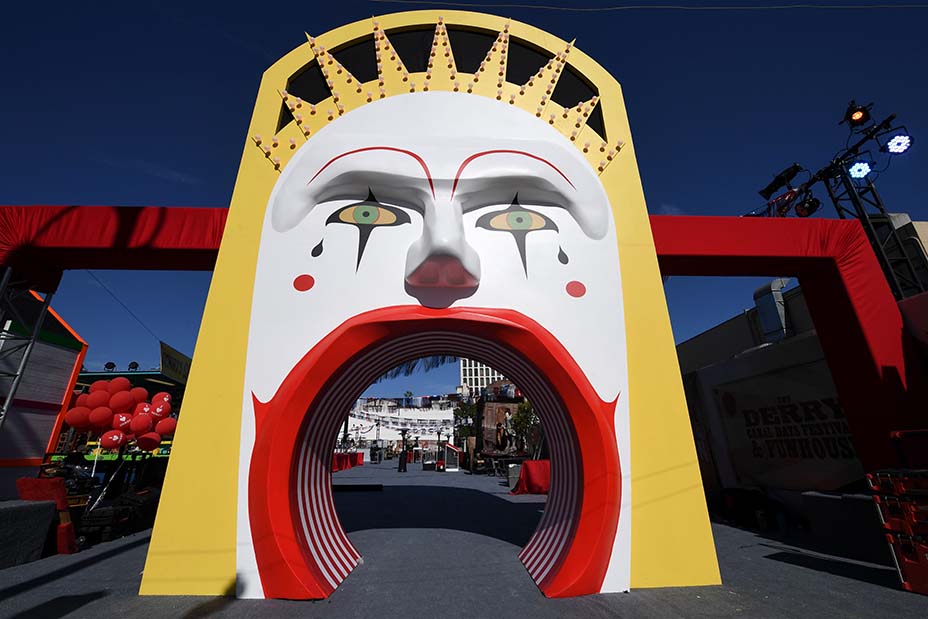 'It: Chapter Two': What the Critics Are Saying