A ripple of anxiety ran through Wall Street on Sept. 9 when Jay Clayton, chairman of the SEC, warned that corporate debt now stands at $11 trillion, half the annual gross domestic product of the United States. “Should we be cognizant of the growth in corporate debt, who holds that debt and the potential ramifications for our markets and our economy?” Clayton asked. “Of course we should.”

Tom Cruise, 'Top Gun: Maverick' and the Uneasy Echoes of Hollywood Past

His warning was timely for Hollywood, coming just a couple of weeks before Endeavor Group Holdings CEO Ari Emanuel pulled the plug Sept. 26 on an initial public offering that investors had regarded warily because of his company’s staggering debt of $4.6 billion.

Clayton’s comment also came within hours of activist investor Elliott Management’s disclosure that it had upped its stake in AT&T — initiated with the goal of reversing an acquisitions strategy that has led the telecom giant to borrow massively in order to purchase assets such as DirecTV, which it obtained for $67.1 billion (including debt) in 2015; and WarnerMedia, which it bought for $85 billion in 2018.

These moves may signal a watershed for the media and entertainment business. Debt, which has fueled much of the industry’s growth for the past decade, is being less widely encouraged by shareholders, who are concerned about the amount of money needed to service it. While none of the bankers and analysts interviewed by The Hollywood Reporter for this article expressed alarm, many said they were concerned about the path ahead. That’s one reason why Lionsgate may be seriously considering spinning off premium cable channel Starz, which is bought for $4.4 billion in 2016. The Wall Street Journal reported on Oct. 8 that the studio’s management is considering setting it up as a separate company.

“It was getting out of control there for a while,” says one top investment banker, who declined to be named. “The entertainment bank market is very competitive and banks have been very aggressive in relaxing certain covenants and lending against certain assets or cash flows where they would not have lent a few years ago.”

Already some banks have paid the price for their over-eagerness, at least when it comes to smaller, production-oriented film companies that have borrowed to cover the cost of prints and advertising (P&A) rather than the “negative.”

In September 2018, Open Road Films declared bankruptcy with $140 million in debt; and in August, Annapurna Pictures agreed to pay its lenders 82 cents on the dollar to resolve $200 million in debt. With a string of flops — including Midnight Sun and Show Dogs from Open Road and Detroit, Phantom Thread and Vice from Annapurna — neither company generated enough revenue to cover its loans.

“When you allow a P&A credit, your only collateral is how a film performs,” says the investment banker. Still, the sums involved with these firms are minor compared to the amounts that have gone to such behemoths as Netflix, Comcast and AT&T. As of June 30, Netflix carried debt of $12.5 billion, Comcast of $108 billion and AT&T of $170 billion, per SEC filings.

Is that too much? No, say most analysts — at least for now. “The cash flow of the major media companies is entirely sufficient to service any debt,” says veteran analyst Hal Vogel. “It’s a different story with these big corporations than production and film companies.”

Wall Street has an established methodology for evaluating whether a company’s debt is out of hand, generally using a calculation that weighs debt against revenue. “It’s best to summarize the leverage [indebtedness] of each of these firms with their net debt/EBITDA ratios,” says Scott Abrams, a professor at USC’s Marshall School of Business, referring to earnings before interest, taxes, depreciation and amortization. The communication services sector, which includes media and entertainment, averages a ratio of 1.9 — that is, its total debt (minus cash on hand) divided by its annual earnings. The higher the ratio, the more worrying. “Generally speaking,” says Abrams, “when the ratio gets to [a multiple of] four or five, that may be cause for concern.” 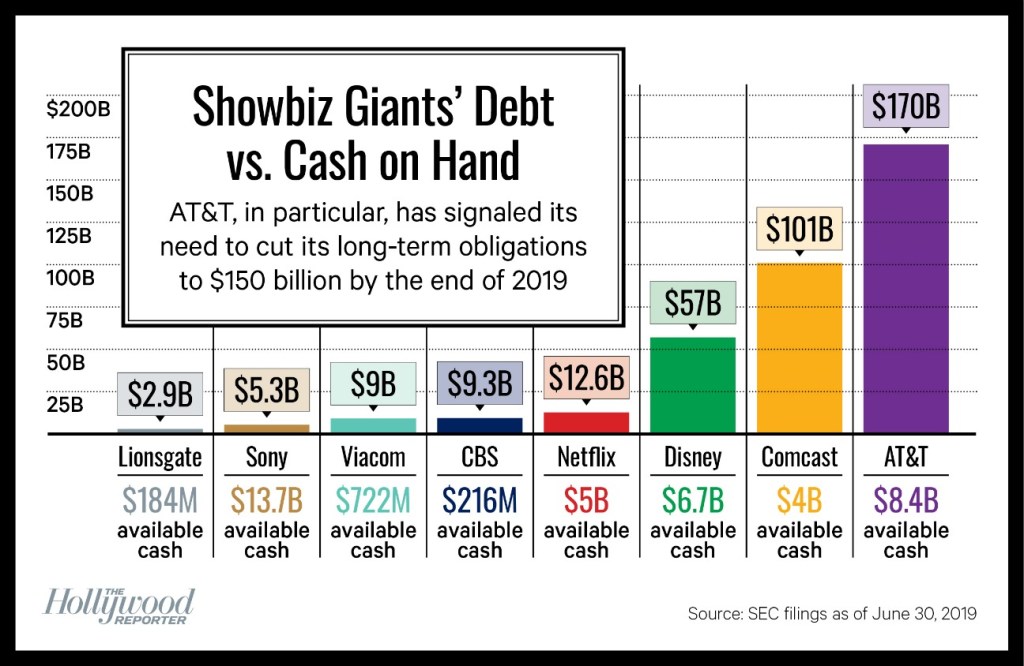 Currently, among the major entertainment companies, only Netflix falls into that bracket with a ratio of 4.4. (Disney is at 3.84, Comcast at 3.14 and AT&T at 3.34.) Even so, says Abrams, “if a company appears to have a high amount of debt, it may be just fine servicing it. While Netflix may not have the hard assets [of Comcast and AT&T], the company can service its debt due to today’s low interest rates — and it will be fine as long as it continues to improve its operating margins.”

Daniel Saavedra, a professor at UCLA’s Anderson School of Management, echoes that point of view, citing AT&T. “AT&T has $170 billion of debt but assets of $546 billion, which they could potentially sell to reduce that debt,” he says. By contrast, “Netflix has debt of $12.6 billion, and assets of $30.2 billion” — though again, he says, its assets comfortably exceed its debt.

All this indicates a relatively healthy situation for most giant media conglomerates. The problem, analysts say, is what happens moving forward, if interest rates rise or a recession causes consumers to change behaviors.

While many analysts think these corporations are relatively recession-proof — they believe subscribers will continue to pay for their services while cutting other expenses — each is continuing to spend exorbitantly, driven by the race to develop premium content. Still in question is whether new streaming platforms that are being launched by these conglomerates — HBO Max, Peacock, Disney+ — will be embraced by consumers.

Netflix has said it will spend $15 billion on content in 2019 alone, while Amazon is on pace to spend $7 billion. The Financial Times reported in August that Apple has spent $6 billion for its new service, AppleTV+. And that’s not including the gargantuan amounts they might also need if any of them decides to buy a library or a legacy studio.

Rather than take on more debt, several of these corporations may be searching for other ways to pay for content. Now, more than ever, says a studio chief, conglomerates seem open to splitting the cost of production rather than footing the entire bill.

“These big companies are looking at the cash they have on hand to sustain the content wars in a world where they have to pay dramatic amounts of money to secure their competitive positions,” says the executive, “and they’re looking for other ways to do it than by borrowing.”

Borrowing also may be getting harder, insiders note, pointing to Vice Media’s Oct. 2 acquisition, via a mix of cash and stock, of lifestyle publisher Refinery29 in a deal valued at $400 million. A flurry of other media deals, including Vox Media’s acquisition of New York magazine Sept. 24 and Group Nine’s Oct. 7 buy of PopSugar, also were all stock.

Even when money is easy to borrow, shareholders are nervous. As a result, AT&T has worked to bring its debt down from a high of $180 billion earlier this year — a number analyst Craig Moffett called “terrifying” at the time — to $170 billion, as reported in its latest quarterly filing. The company’s CEO, Randall Stephenson, has said he wants to reduce that debt to $150 billion by the end of the year and appears on track to do so, according to a July 24 investor update.

To bring its debt down, AT&T has sold its stakes in Hulu and Hudson Yards, and reportedly has explored unloading DirectTV, though WarnerMedia chief John Stankey has denied plans for a sale. The company is “committed to driving our net debt-to-EBITDA ratio to around 2.5 times by year-end, and we are right on track for achieving that,” Stephenson said in April.

Carrying less debt means the company can continue to pay generous dividends to its shareholders, rather than use its earnings to make interest payments. “Their issue is basically sustaining their dividend,” says Vogel. “It’s very significant because AT&T is one of the most widely held stocks by individuals and large institutions. If they lowered their dividend, the stock wouldn’t just drop a dollar or two, it would crater.”

So far, none of these companies has come close to that — not even Endeavor, which is continuing to function as normal while it re-evaluates its options for an initial public offering.? Still, Endeavor’s about-turn, announced just a few hours before it was due to unveil its IPO, may be a harbinger of things to come, a sign that the entertainment business is feeling pressure to change its ways, aware it can no longer keep on borrowing ad infinitum without paying a heavy price.

This story appears in the Oct. 9 issue of The Hollywood Reporter magazine. To receive the magazine, click here to subscribe.