Alanis Morissette’s era-defining 1995 alt-rock album, Jagged Little Pill, became an international sensation not just for its galvanizing pop hooks and crunchy guitar riffs. It was the compelling combination of its raw, intensely personal female introspection alongside universal reflections on the debris of adolescence that made young women, in particular, hear their own roller coaster of emotional experience in the songs. Hats off to writer Diablo Cody and director Diane Paulus for their ambition in weaving that thematic core into a coherent narrative that speaks directly to the messy reality of American life almost a quarter-century later.

The aggressive bid for now-ness is both a blessing and a burden in this overwrought, overstuffed but ultimately affecting show. Wearing its woke sensibility on its sleeve with no hint of cynical calculation but instead with a sincerity that sometimes borders on cringey, the musical addresses a whole curriculum of hot-button bullet points — climate change, opiate addiction, gender and racial identity, white privilege, rape culture, social media-shaming and repressed sexual trauma, just for starters.

Jesse Williams on 'Take Me Out' Nudity Leak: "Theater Is a Sacred Space, and Everybody Doesn't Understand That"

In her first musical-theater undertaking, Oscar-winning screenwriter Cody’s book to a great extent succeeds with its acerbic humor and obvious affinity for characters that spring more or less organically from Morissette’s blistering self-exposure. But much of the show is also a heavy-handed downer, its glut of anxieties becoming suffocating. 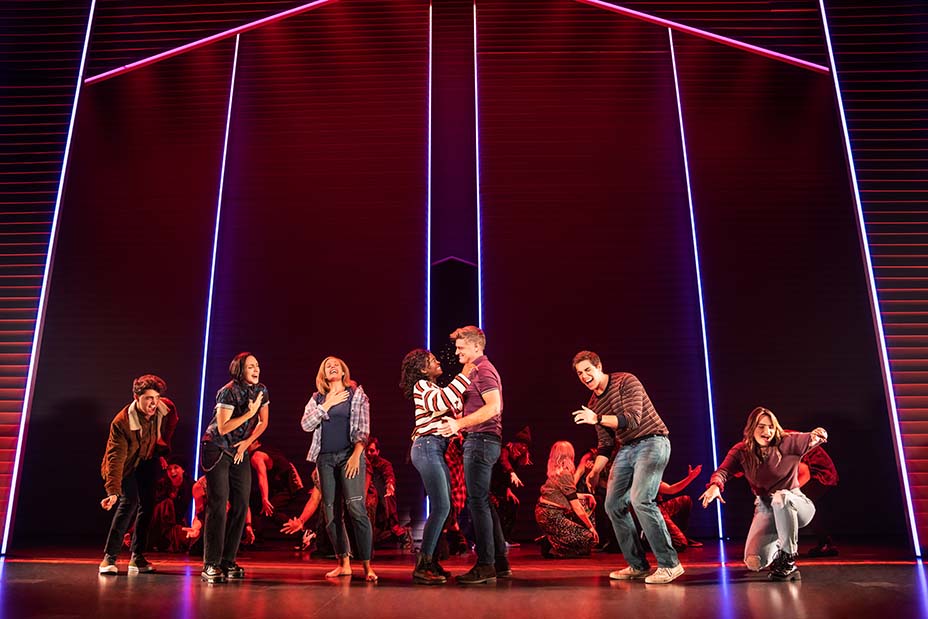 The singer-songwriter’s unfiltered honesty about uncomfortable subjects was startling for mainstream pop at the time — who else was spitting out reminders of giving head in a theater? This was not the posing wink-wink sexuality of Madonna or the defiantly in-your-face wreckage of Courtney Love in the Hole years, but a frank exploration of young female experience hatched out of what felt like real hurt and outrage.

That particular type of exposed-nerve candor has become more common in indie movies and TV series like Lena Dunham’s Girls, which may be why Cody’s attempts — within the broad strokes required of a musical — to shape flesh-and-blood people around Morissette’s emotionally cathartic songs make them seem like archetypes hauling the baggage of teachable moments. It’s also hard to separate these songs from Morissette’s own distinctive voice, a mezzo-soprano with a rocky serrated edge that can draw blood.

That’s not to say some of the skilled performers here don’t lay persuasive claim to the material. But with four principal women, and, to a lesser extent, three men sharing the show’s probe of the human condition — and competing with so many topical issues — our investment is stretched thin until midway through the second act, when the focus finally tightens around Mary Jane Healy (Elizabeth Stanley, wonderful).

That delay is due partly to the exhausting busyness of Paulus’ direction, ushering on the ensemble for almost every number as they fling themselves around like acrobatic whirling dervishes in choreography by Sidi Larbi Cherkaoui that swings between tortured and ecstatic, with too little in between. It’s a relief in the rare instances that a character or two are left alone to explore their feelings in song, without all the frantic distractions. 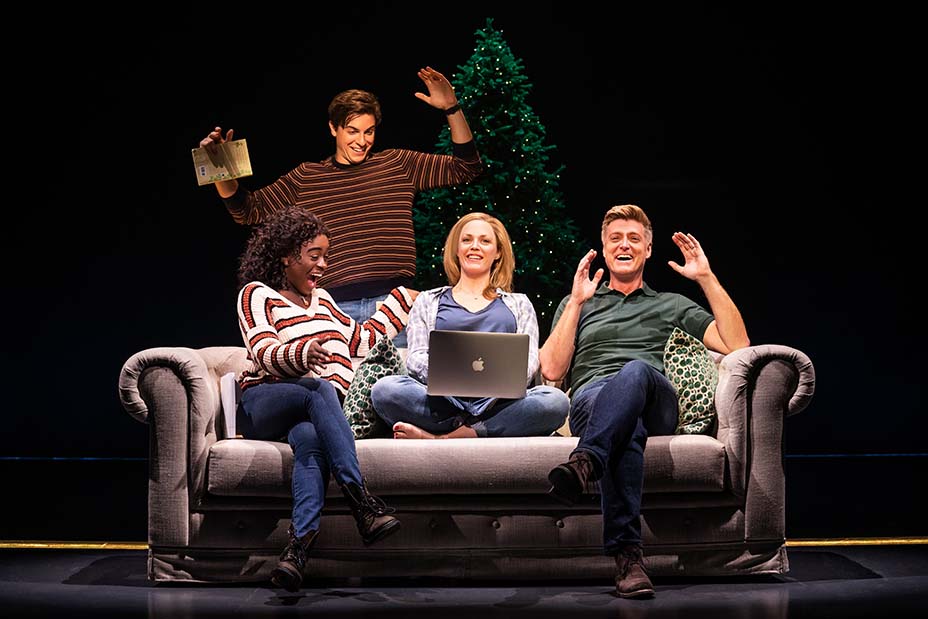 Mary Jane opens the show with her Connecticut family’s annual Christmas letter. The festive tree sparkles behind them and carolers sing outside their door, but MJ instantly acknowledges the cracks in their seemingly perfect suburban sitcom façade.

Her husband Steve (Sean Allan Krill) is a law firm partner billing 60 hours a week but able to find time for his hardcore porn habit. Adopted daughter Frankie (Celia Rose Gooding), 16, is exploring political engagement and sexual fluidity with girlfriend Jo (Lauren Patten), but struggling to reconcile being an African American in WASP Central. Golden-boy biological son Nick (Derek Klena) has been accepted early to Harvard, following the plan of controlling overachiever MJ, and yet in the most generic of this assortment of crises, he feels nothing. As for MJ herself, she has bounced back from a fender bender with the help of hot yoga, but her painkiller addiction has steered her from pharmacies to shady street dealers once she maxed out her prescriptions. It also has made her feel increasingly distant from Steve.

These main characters unpack their inner selves in “All I Really Want,” smartly repurposed to convey different shades of unrest. But it’s also the first sign that wrapping Morissette’s idiosyncratically personal lyrics around folks for whom they were not written is going to be an imperfect fit, thematically as well as vocally. And once the ensemble comes in — representing a full spectrum of shapes, ethnicities and gender expressions — the sound mix tends to favor volume over clarity.

Much as he did with Green Day’s music on American Idiot, Tom Kitt’s orchestrations and arrangements for the eight-piece onstage band scale up the 12 tracks from the title album — co-written by Morissette and producer Glen Ballard — plus another 11 from other recordings, including two new songs, to theatrical size for multiple voices. But it’s wearing in the first act especially that the prevailing tone is quite glum. The excess of melancholy makes the handful of upbeat songs welcome jolts of positive energy.

The first of those is Jo’s “Hand in My Pocket,” sung with flirty swagger by Patten in one of the show’s standout performances. The genderqueer character endures the disapproval of their churchy mother, but Patten sings as if on a cloud, elevated by Jo’s love for Frankie and refusal to deny their true self. Another is “Ironic,” which feels forcibly wedged in as Frankie’s poetry exercise in creative writing class, though it yields amusing meta-acknowledgments of Morissette’s famous misuse of the word. And “Head Over Feet” expresses the dizziness of romance between Frankie and sensitive new classmate Phoenix (Antonio Cipriano), which has bitter consequences for Jo. 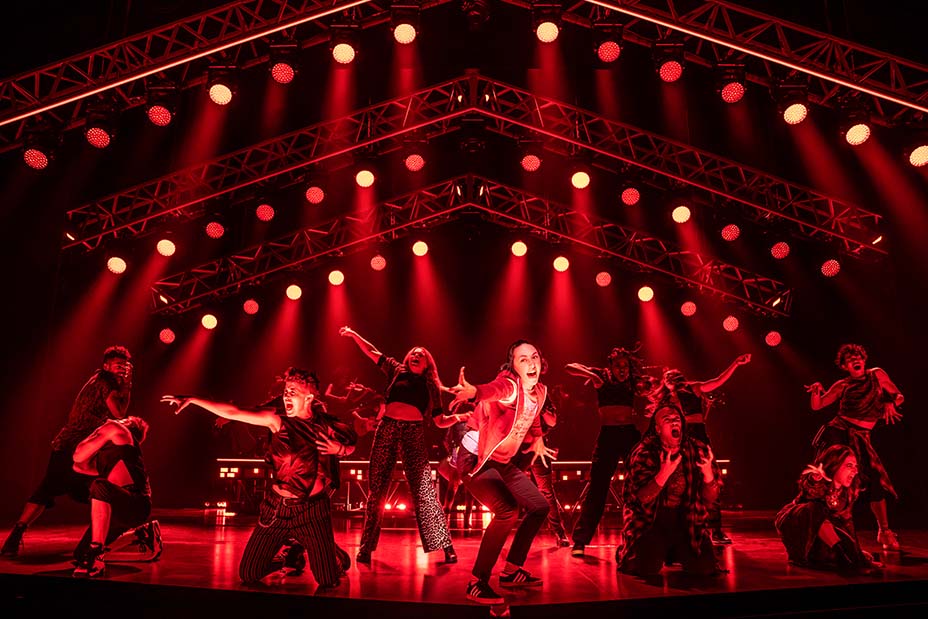 The darker material concerns MJ’s steady unraveling, which is first suggested as her day rewinds from an awkward pharmacist interaction back through Soul Cycle class with her vapid crew of fellow moms in matching puffer vests, finally leaving her facing herself in the mirror as Stanley performs one of the new numbers, “Smiling.” As an excavation of the unhappiness beneath this woman’s carefully polished surface, it’s arrestingly staged, but like so much of Paulus’ work here, there’s too much going on, initially keeping us at a distance from the character.

Stanley’s characterization packs the emotional heft to reel us in eventually, a process that begins to take hold in the powerful Act I closer, “Forgiven,” sung when she takes a rare step inside the local church, looking for spiritual help alongside a bank of votive candles. And when MJ hits rock bottom, Paulus is smart enough to leave Stanley almost alone onstage to sing “Uninvited,” her pain incarnated in the agonized physicality of Heather Lang’s convulsive dance moves.

Lang also serves as dance doppelganger in the wrenching arc of another principal character, Bella (Kathryn Gallagher), a high school senior date-raped while drunk at a party. Her Twitter humiliation is followed by the indignation of having her version of the facts dismissed by her peers; it also sparks corrosive remorse in Nick, who failed to intervene when he saw what was happening.

Cody confidently weaves these threads together, notably so when Bella’s experience dovetails with MJ’s past, forging empathy where there was an impasse and helping both these damaged women to access their feelings. Gallagher gets Morissette’s other new song, “Predator,” a howl of despair that packs a wallop. But when Frankie and Jo lead a #MeToo rally, the show’s earnest attempt to cram in so many pressing social issues of our age starts straining at the seams. It also makes the hopeful resolution feel like a too-tidy stretch. 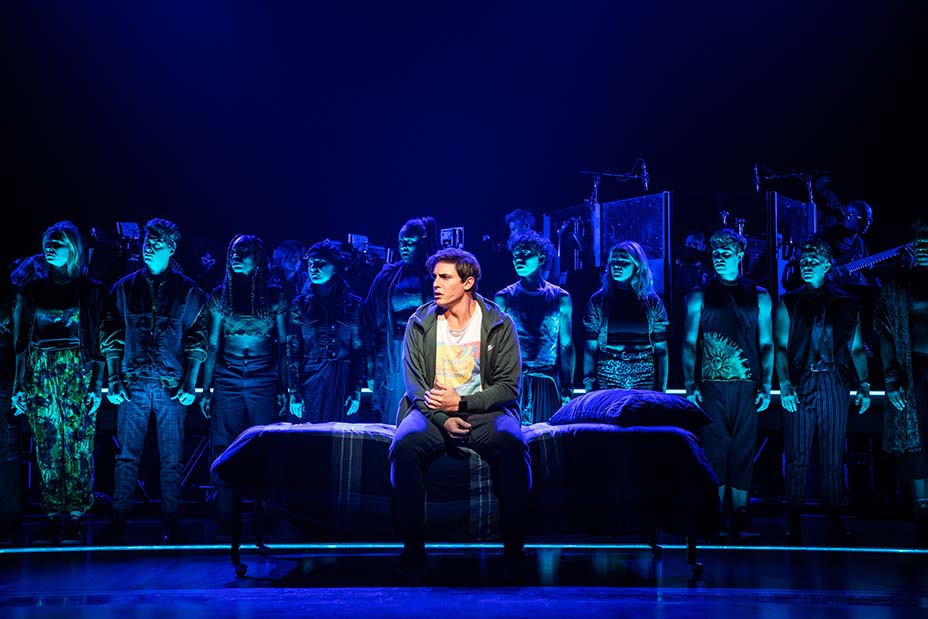 There’s a more visceral charge in the anger of the wronged Jo, and Patten turns the spurned-lover anthem, “You Oughta Know,” into an electrifying showstopper, starting out frozen in rage and then thrashing about in a violent release of stunning force. While it’s inevitable that with so many main characters jockeying for our interest some will be underserved, Jo in particular seems to demand more stage time, instead of being so often on the sidelines of the less satisfyingly developed Frankie’s drama.

While Justin Townsend’s lights provide a dynamic pulse, this is not the prettiest production. Riccardo Hernandez’s principal set elements are cumbersome moving panels splashed with video designer Lucy MacKinnon’s photos and projections; their near-constant motion does little to alleviate the show’s sense of ADHD onslaught. Paulus has made this stylistic tendency work for her in musicals like Hair, which is a hallucinatory hippie vaudeville, and Pippin, with its medieval fable as circus cavalcade. Here, it frequently becomes enervating, adding to the narrative overload.

Still, there are thrilling emotional peaks and urgently relatable contemporary issues that should generate a passionate audience for Jagged Little Pill among young theatergoers who responded to musicals like Next to Normal and Dear Evan Hansen. The messiness of the show’s craft is even somewhat justified by its focus on “perfectly imperfect people, just like you.” Whatever the weaknesses of the creative team’s work, they deserve credit for breaking the jukebox mold and building a story that wrestles with real feelings and takes a stand against complacency. 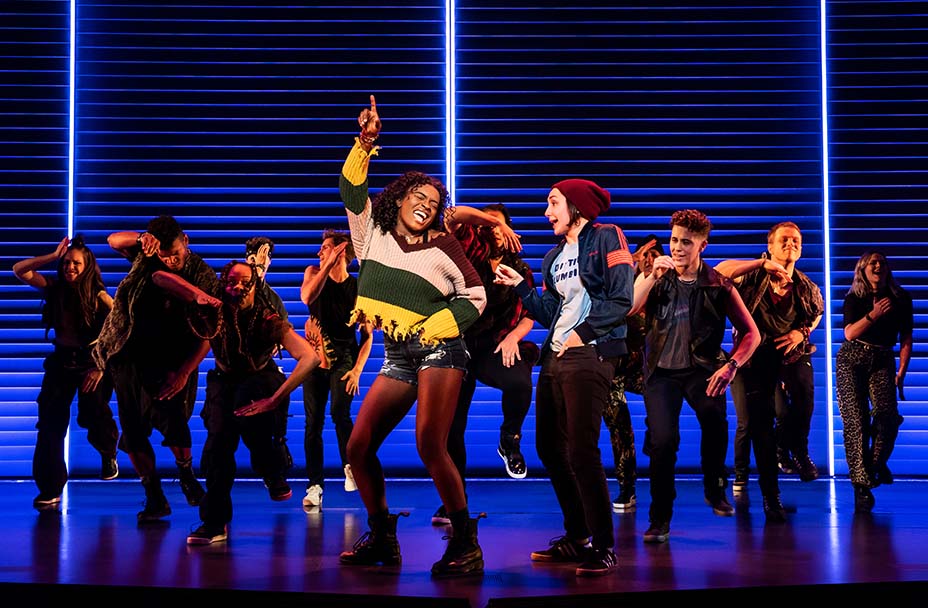