More than two weeks after John Skipper resigned Dec. 18 as president of ESPN, the massive shock waves that greeted the abrupt exit of one of the most powerful people in sports media have begun to die down, but widespread skepticism remains. Initially, the focus was, perhaps understandably, on what Skipper himself revealed in an email to employees: “I have struggled for many years with a substance addiction,” he wrote, and “I have decided that the most important thing I can do right now is to take care of my problem.”

No one saw Skipper’s departure coming, including those closest to him at the network; few, if any, knew he had a “substance addiction” issue; and most, once they learned of it, asked incredulously why he didn’t take a leave of absence to seek treatment, then return, conceivably stronger than ever. Skipper has never had problems being likable. Public opinion inside and out of ESPN and parent company Disney would have most likely been with him. America loves tales of falls and recovery. So surely, many thought, there must be something else going on; substance abuse must be filling the role of the MacGuffin in a Hitchcock thriller — perhaps the cover for a workplace scandal.

Yet since the bombshell announcement, not a single story has materialized that offers a more plausible explanation that goes beyond the original, mercurial Skipper statement (and that’s with just a few million investigative reporters trying to track one down). Now, some Skipper supporters are beginning to believe his departure was only about a drug problem. Maybe in this case, a cigar really is just a cigar.

Well, as much as I’d like to join them in believing that, I’m sorry, but I just can’t. What if instead of jumping, John Skipper was pushed — and not because of any sordid story desperately being kept secret? What if the critical word in his statement wasn’t “addiction,” but rather that his departure was “mutual”? What if this was, in a manner of speaking, a Mickey Mouse operation?

In the absence of a smoking gun, proceeding down such a path could easily be compared to suggesting the moon landing had been staged in a studio somewhere in the Valley. Nevertheless, we can all agree that if his resignation were fueled solely by his drug problem, that would be a conclusion Skipper would have come to after long and deliberate thought. So consider:

First, I simply don’t believe Skipper is a good enough actor to stand in front of hundreds of ESPN employees Dec. 13 and lay out an infectious and enthusiastic blueprint for the future of the company — and tell them, according to sources who were there, “We’re all in this together” — if he knew he’d be leaving in a mere five days. No. Freakin‘. Way. Skipper can be as crafty and cunning as the best of them, but lying like that has an amoral dimension to it that is certainly not Skipperesque. (If anything, he’s gotten himself into trouble by being too transparent).

Second, I don’t buy the idea that after being basically prevented from doing press interviews and major public speeches for more than a year by highly protective and cautious investor-relations gurus in Burbank, Skipper would suddenly raise his profile while knowing he was about to fold his tent. That makes no sense at all. In addition to the highly visible presentation before ESPN troops Dec. 13, Skipper did a “Keynote Conversation” at the Sports Video Group Summit in New York 24 hours earlier, again approaching the future not in a “This will be my legacy” manner, but rather a “We have great days ahead, just watch us” perspective.

Third, for more than a year, Skipper and I had been discussing a long, comprehensive and nothing-off-the-table interview he had agreed to do with me. I saw his public appearances and comments dwindling in 2016 and that situation became even more apparent throughout 2017 (complete with not a word, even on background, to reporters after ESPN’s annual upfronts, which had been a tradition).

Skipper did sit for an interview with me for about 40 minutes in late November and did a follow-up via phone in early December, but it was specifically for my podcast, Origins, dealing with social media at ESPN, and the documentary series 30 for 30, which he greenlighted. In the podcast, he said, “I must confess that there’s been a significant amount of stress” dealing with social media imbroglios like Jemele Hill’s tweets about President Trump, and Samatha Ponder’s posts about Barstool Sports, adding, “It’s frustrating, and I have let that get the better of me a few times.” I told him that kind of openness was one of the reasons I was so looking forward to our long-planned interview, and he said he was as well. We continued to talk about it, and in early December he told me he was going to be able to do the interview and we just needed to focus on more specific timing. When was our last communication about such timing for the interview to take place? Dec. 14 — the day after his speech in Bristol and the day before sources indicate the decision was made to announce his resignation 72 hours later.

Fourth, what about his contract extension? Before he agreed to a multiyear renewal in late spring 2017 to remain at ESPN, Skipper, 62, had given great thought to whether he was going to leave the job or stay. It wasn’t a no-brainer for him, yet he ultimately came to the conclusion he wasn’t ready to say goodbye. He wanted to change the course of the anxious narrative surrounding ESPN for the past several years, fueled by declining subscribers and layoffs, and felt that he was beginning to put together the pieces of a new and better era. Remember, in his resignation letter he used the phrase “many years” to characterize his addiction. Are we supposed to believe that after such a long time, it got so suddenly and significantly worse after he agreed to re-up to the point where he had to go through such a public bloodletting? Wouldn’t the prudent move have been to not re-up and take care of his problems privately?

Finally, it simply doesn’t make sense that Skipper created a new hierarchy for ESPN just months ago if he had any thought of leaving in the near term, because the new management structure was topped off by the trio of Justin Connelly, Burke Magnus (whose contract expires in just two months) and Connor Schell. Skipper obviously valued and trusted these three executives but also believed each had his own learning curve and was excited about mentoring them in the years to come. You never heard him saying that any one of them could step into his shoes at a moment’s notice if, God forbid, he was struck by a bus. 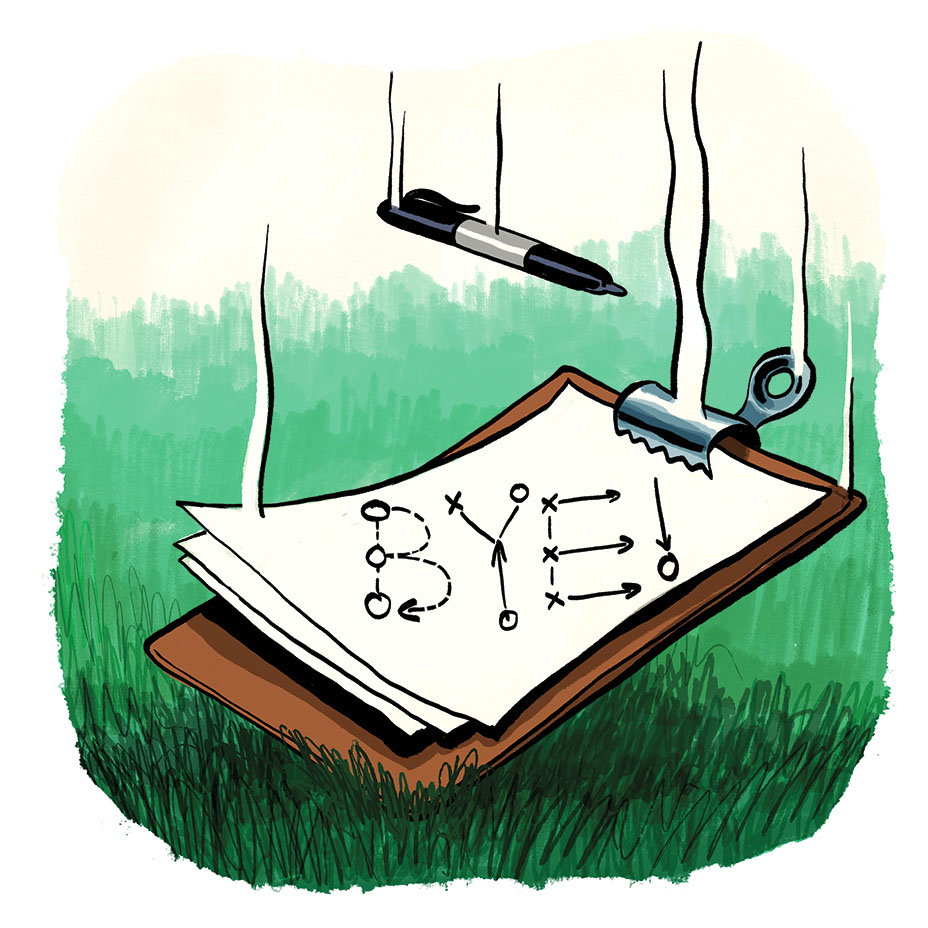 If Skipper was contemplating an exit, the smart and easy path was to have simply said yes to Disney CEO Bob Iger’s invitation/urging to bring over to ESPN one of Iger’s most trusted lieutenants, Jimmy Pitaro, currently chairman of Disney’s products division. Going back a couple of years, this reporter learned that Iger had offered up Pitaro’s services to Skipper on several occasions to shore up what some in Burbank considered a less-than-stellar senior management team in Bristol, or at least one that didn’t have Skipper’s successor in its ranks.

But Skipper, in his most audacious move as president of ESPN, gave a Southern, polite “No thanks” to his boss and to the prospect of a Pitaro transfer, explaining that he thought the move would disrupt the ESPN culture and that Pitaro’s services were not needed. A more cynical view was that he didn’t want to have a clear successor in place, thereby guaranteeing his own longevity. Or so he thought.

How can one further defend the idea that Skipper didn’t leave ESPN voluntarily? What if it’s as simple as he was no longer wanted? In late November, John Lasseter, co-founder of Pixar, was given a six-month “sabbatical” to deal with his issues, care of the very same corporate parent. Even if Skipper had done drugs in a Disney bathroom, if he was regarded as the right leader for ESPN, you get the guy immediate help and tell him not to worry about his job because it will be waiting for him. Even if he says he wants to quit, you try and talk him out of it. Alcohol and drug treatment facilities are veritable stomping grounds for corporate leaders on leave.

In the aftermath of Disney’s Dec. 14 announcement that it will acquire significant parts of 21st Century Fox, Iger revealed he will stay at Disney through 2021, not only apparently taking him out of the running for the Democratic nomination for president, but also giving him more time to deliver to the Disney board a designated successor for himself. And what better proving ground is there in the Disney constellation than ESPN? Skipper’s replacement will have to deal with many major elements involved in today’s and tomorrow’s media businesses, including acquisitions, television/digital rights, the creation of new, meaningful revenue streams, and battling competition from rivals old and new. Get the ESPN job, hit that pitch out of the park, and you’ve automatically earned a spot on the shortlist to follow Iger.

As one of the most impressive media titans in the last quarter century, Iger is obviously entitled to select whomever he wants as president of ESPN, and if he decided in the wake of the Fox acquisition — or at any other time — that person should no longer be John Skipper, so be it. Remember, Skipper’s departure was “mutual.” So if Iger further believed the best way to initiate a transition of leadership would be for Skipper to publicly acknowledge his addiction issue, thereby inoculating the company from any bad news that could surface in the future, one could see how that made sense even if it carried a price tag commensurate with the remainder of Skipper’s contract. This is not to suggest that Skipper’s silence could be bought, but there is no denying his love for and attachment to ESPN. If he was convinced that such a plan was the best path for his colleagues, then writing a goodbye statement and using addiction as the excuse makes perfect sense. Of course, there is also the possibility he had no other choice.

What about Skipper’s future? Last year, the name George Washington came up in a conversation we were having about American history. Skipper nonchalantly asked, “Did you read [David Hackett] Fischer’s book about the crossing? I thought it was better than most.”

Better than most?! Isn’t that the kind of remark one might expect from a college history professor, not from the president of ESPN? But it was, in typical Skippical contradiction, the kind of surprise you’d come to expect from him. Skipper got his master’s degree in literature from Columbia. He knows what acts are in the narrative structure, and it’s a good bet he will want another. The surprises will continue. John Skipper is not to be counted out — at least, not just yet.