Avatar, one of the most successful films of all time, shot back into the public consciousness a year prior to release of its sequel with a collaboration between Oscar winner James Cameron and Mercedes-Benz. The result, a unique concept vehicle shown at CES on Monday, debuted to a rapt audience at the Park Theater at Park MGM in Las Vegas. It’s called the Mercedes-Benz VISION AVTR, inspired by the film.

At the unveiling, Mercedes-Benz chairman Ola Källenius was joined onstage by Cameron and key members of the Lightstorm Entertainment team, including Academy Award-winning producer Jon Landau, production designer Ben Procter and supervising art director Aashrita Kamath, alongside numerous Mercedes-Benz creatives. During the wait for the press conference to begin, a slew of 10-foot-wide remote-controlled Avatar butterflies flew over the audience, with one twenty-something remarking, “I’m starting to get emotional.”

CES: What Mattered to Hollywood

The VISION AVTR, or ADVANCED VEHICLE TRANSFORMATION, concept embodies Mercedes-Benz vision for mobility in the distant future imagining completely new interaction designs between humans, machines and nature. It fits into Mercedes-Benz’s parent corporation Daimler AG’s refocused orientation on sustainable mobility, resource-saving preservation of the environment and the harmony between human, machine and nature, and is part of the brand’s “Ambition 2039” initiative. The brand’s focus is to be the most loved sustainable modern luxury automotive brand in the market. 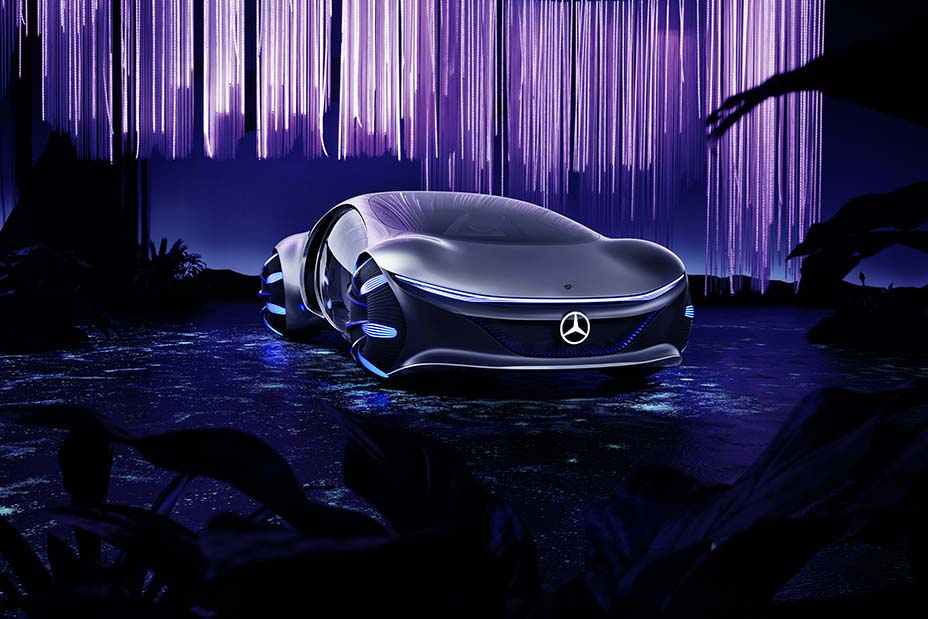 “We’re aiming at carbon-neutral vehicle production, growing the share of electric vehicles sold and, finally, having a carbon-neutral new passenger car fleet by 2039. We want to address this in a holistic way. That includes driving our suppliers and partners to comply with our objective of carbon neutrality,” remarked Källenius, chairman of the board of management Daimler AG and Mercedes-Benz AG.

The VISION AVTR is a swoony and futuristic four-seat electric concept car that features a host of design cues inspired by both the film’s production design — including the woodsprites — and storytelling and would not look out of place on Pandora in 2154.

“The production design inspired the mechanics and the bionics of the concept, for instance, the woodsprites gave us inspiration too for the wheels and the way they create light and movement,” said Steffen Köhl, director of advanced exterior design at Mercedes-Benz. “There is a universe of shapes and creatures from the film’s universe that provoked us when we thought about the vehicle’s design. The spiral repeating lines from the Navi reflect the illumination of the multifunctional control element in the center console that allows human and machine to merge. By placing the hand on the control unit, the interior comes to life and the vehicle recognizes the driver by his or her heartbeat and breathing. The 33 bionic flaps on the back of the vehicle are reminiscent of scales from the dinosaur-like creatures from the film and they move and breathe and live. The connection between the Na’vi people inspired us to have a connection between the concept and the driver. It was fun to go through the design process with the Lightstorm team. For all of us, it’s wasn’t just car design, it’s a living sculpture.” 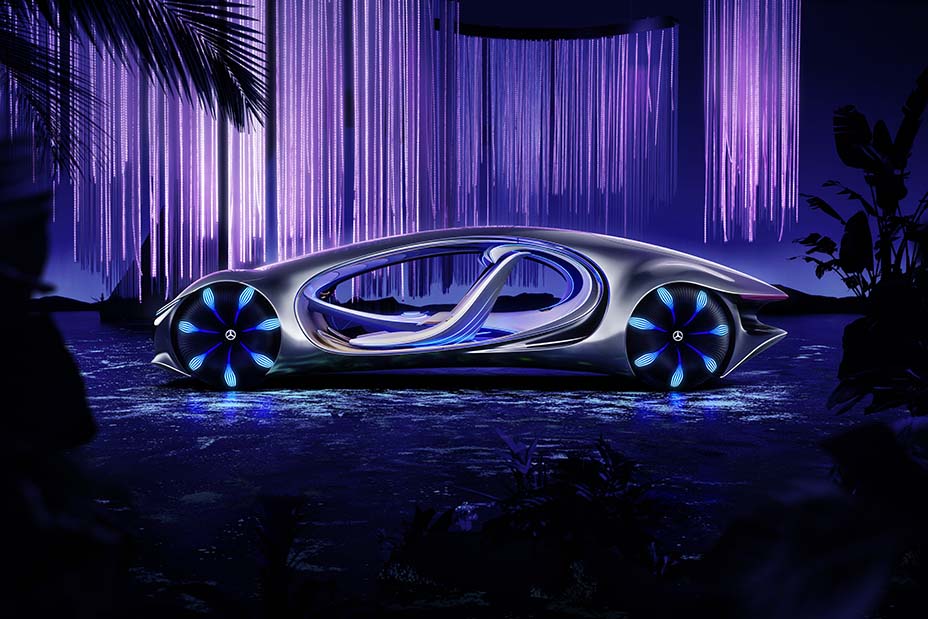 Added Mercedes-Benz chief design officer Gorden Wagener: “We placed a strong focus on organic materials and functions that are reminiscent of organisms. The interior acts like a nest or a cocoon that protects passengers and we only used organic or vegan materials. The center console of the concept symbolizes the Tree of Souls, the holiest place of the Na’vi. Everything is connected to everything.”

But how does it all fit in with Avatar and the next four sequels and how does James Cameron work on a collaboration with an automotive brand? When asked how he protected his most important IP, Avatar, which has sequels planned over the next decade with massive partnerships like these, Cameron responded with a laugh, “Well, looking forward, it is my life’s work, I mean — how long am I going to live?

“But seriously, we learned an important lesson from working with Disney when they purchased the license of our IP to do a themed land. We found out that the best way is to not have control or oversight but to have a real voice, to be a dynamically active partner. This was basically the precursor to our relationship with Mercedes, in a sense, because we said the same thing to Disney as to Mercedes — ‘You have great designers, we have great designers. Let’s work together on it.’ And so what emerged was the product of a joint collaboration. That’s exactly what happened with this concept vehicle. Our design team worked with all their design team, and the ideas flew back and forth and the car that emerged is the result of both of our work.” 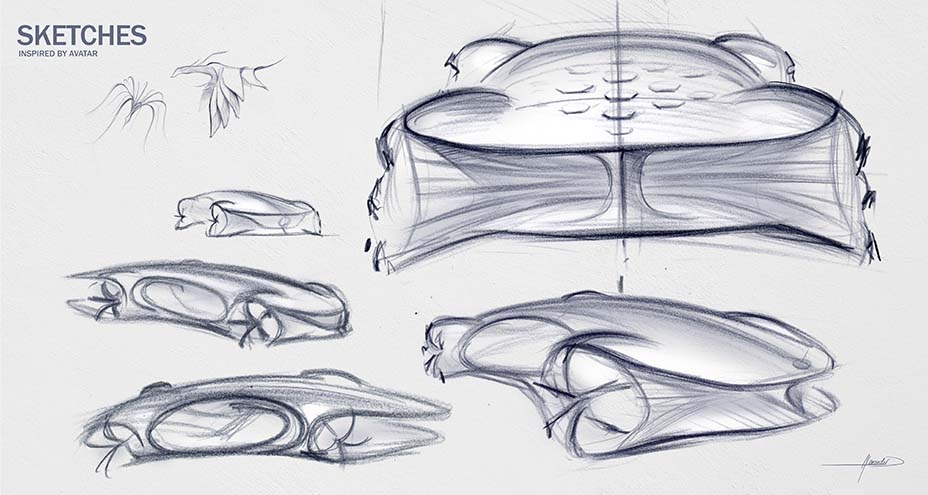 When asked if he played a key role in the design, the famously hands-on filmmaker laughed again: “I was too busy making the movie to design the car.” Striking a more serious tone, he continued: “I trust my team and I’ve got some of the best designers in the world, I’ve got a great franchise team that really has a good sense of our brand and what we represent and what we’re trying to say as well as what our boundaries are. We won’t, for commercial reasons, step over a line that we’re not philosophically aligned with.”

Landau echoed the sentiment: “We don’t want to have a hundred partners, we want to have what I call Olympic-class partners and find a select group of people that share our same ethos. We had a dinner four years ago with Ola and then he came down to Lightstorm and we showed him around and I told him where we were going with the project.”

When asked if these partnerships — like the one with Mercedes-Benz — need to fit with Cameron’s overall and deeply personal vision of environmentalism, Landau replied, “Absolutely. That’s exactly right. They’ll come on board as we get nearer to the release in 2021 and there is going to be an integration of the promotional campaign around their new EQ line, which are Mercedes-Benz’s electric vehicles, and that’s why it worked for us with Avatar on this type of partnership, because of the messaging they wanted to go out there with.”

“To be clear, it’s not a product placement,” Kathy Franklin, president of franchise development at Lightstorm, told The Hollywood Reporter. “The concept car is not going to be appearing in the sequel — it’s really a creative collaboration and inspired by, not just the first Avatar film, but the themes that are going to be explored in the sequels. We feel that Avatar is not only extremely well represented, but the partnership has an opportunity to broaden the reach and impact of Avatar to new audience.”

When asked how co-creating a concept car gelled with his environmentalism, Cameron added, “Collectively and across the board, Hollywood people tend to like causes and so they tend to be on the forefront of the things that need to be said that other people sometimes don’t want to hear. Whether it’s race, gender or whatever that may be, but when it comes to the environment and our human survival, that is the one place where I think Hollywood has a real voice.” 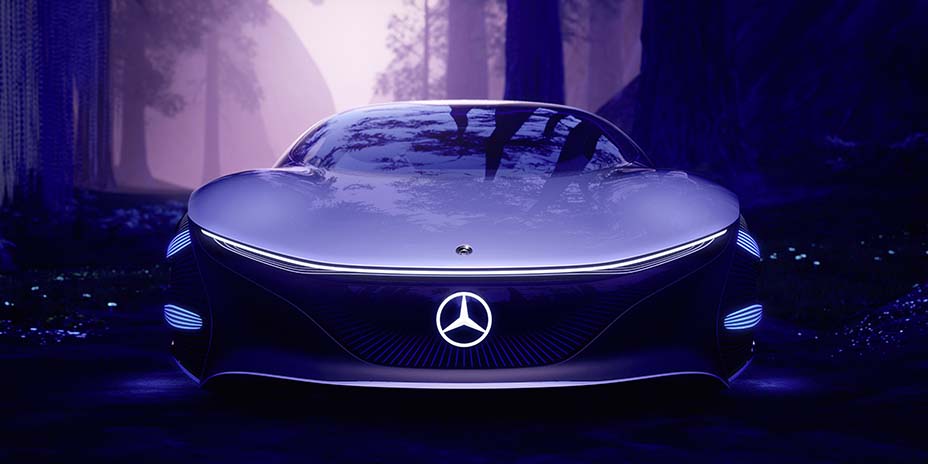