More than just an affable late-night talker or carbound crooner, James Corden has proved himself a nimble awards-show emcee. His latest hosting gig once again sees him presiding over the Tony Awards — broadcasting live June 9 on CBS from Radio City Music Hall — where shows like Hadestown and The Prom will vie for best musical and Annette Bening, Elaine May and Laurie Metcalf will duke it out for best actress in a play. THR caught up with Corden, 40, from his hotel in London, where he was filming bits for CBS’ The Late Late Show (the June 17-20 installments will originate in the U.K.), to talk about Broadway’s biggest night.

Your own theater track record — including a Tony for One Man, Two Guvnors — is quite impressive.

I would be very disappointed if I didn’t do a couple of plays or a musical again, in London or in New York. I would say, it burns brighter in me now than it probably did before I took on The Late Late Show. I would have to do it after I’ve finished this current glorious journey that I’m on.

This is your second time hosting the Tonys. The previous time, in 2016, coincided with a terrible tragedy.

The night before was a shooting in a gay nightclub in Orlando, Florida. As the day went on, it became clear that we were going to have to talk about it in some way. I thought we had to bring it back to the Tony Awards — to say that this is a community who historically opened their arms to everyone: race, sexuality, gender — everybody is welcome. We decided that was how we were going to open the show and that maybe we could shoot from the back of the stage to see the room. In the end, it totally felt like it was right.

Is it hard to do jokes for a national audience about such a localized product?

The trick is to make jokes that will play to the people at home and the people in the room. Last time, we did a bit where we found out that 50 percent of the performers in that room have been on Law & Order. Then we delved deeper, and we realized that Daveed Diggs and Leslie Odom Jr. [from Hamilton] were in the same scene in the same episode! That’s how we’re going to try to do it. It would be naive to make in-jokes about what happened at the matinee of Kiss Me, Kate two weeks ago. 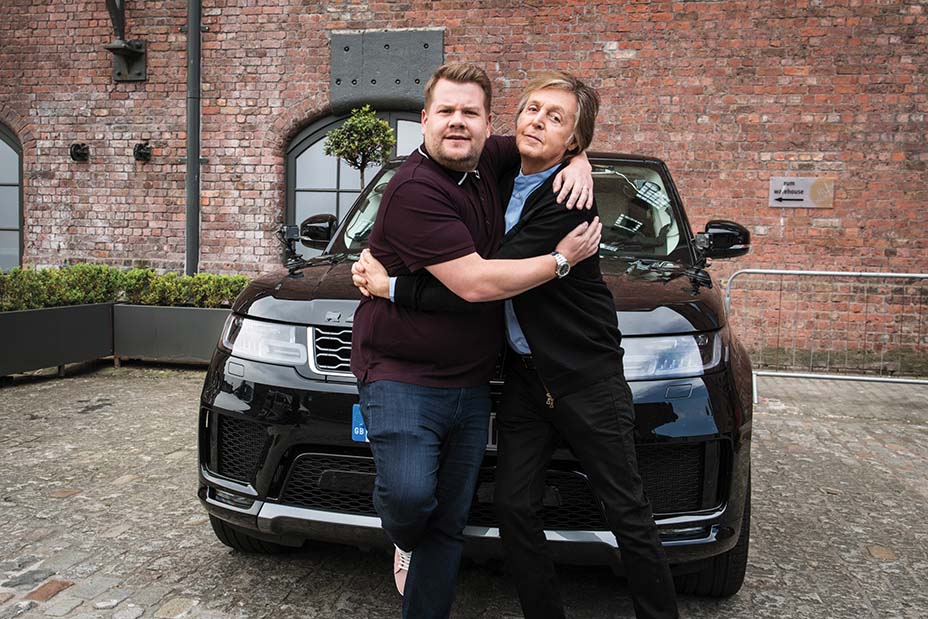 Do you have a wish list of who you want to book for “Carpool Karaoke”?

We don’t really get as many no’s as we used to. In fact, we never really get no’s, we just get “not right now.” That’s wonderful for a segment that was unbookable at the start. My wish list is the same as everybody else’s. You know, like, Beyoncé, Taylor Swift and Kanye West and Paul Simon and Bruce Springsteen. And Billie Eilish.

We’ve just been out shooting around London with the cast of X-Men: Dark Phoenix, which we did like a star tour. Regular people go on star tours all the time, but there’s no tour for stars. So this is The James Corden Star Star Tour: the tour that takes the stars on tour in London. We drove Jessica Chastain and Michael Fassbender and James McAvoy and the X-Men around on an open-top bus.

We were making up ridiculously stupid facts about London and singing songs. We’re going to Paris to film something [at the start of June], then we fly straight to New York and start rehearsing the Tonys proper. And then the Tonys. Then we go to L.A. for four shows, and then we come back to London.

And then hopefully a vacation.

Yeah — it’s a lot for a gig that most people seem to think is just sitting behind a desk and asking questions.