James Drury, who starred as the no-name, no-nonsense foreman of the Shiloh Ranch on The Virginian, one of the longest-running Westerns in the history of television, died Monday of natural causes. He was 85.

Drury died at his home in Houston, his assistant, Karen Lindsey, told The Hollywood Reporter.

Preparing for his most famous role, Drury appeared in several Westerns on the big screen, including Good Day for a Hanging (1959) with Fred MacMurray, Ten Who Dared (1960) at Disney and Sam Peckinpah’s Ride the High Country (1962), working opposite Randolph Scott and Joel McCrea (who starred in the 1946 film The Virginian).

Based on Owen Wister’s 1902 novel of the same name, The Virginian was launched by executive producers Roy Huggins (Maverick, 77 Sunset Strip, The Fugitive, The Rockford Files) and his son-in-law, future Columbia and Universal studio chief Frank Price.

It aired for 249 episodes on NBC over nine seasons, from 1962-71, and among Westerns, only CBS’ Gunsmoke (20 seasons) and NBC’s Bonanza (14) lasted longer. Drury and his co-star Doug McClure, who played the fun-loving Trampas, were the only castmembers to appear in every season.

Drury’s laconic character was always referred to as “The Virginian”; he had no name, unlike his horse, a white Appaloosa called Joe D. The Shiloh foreman may have sported a black hat, but he routinely did the right thing, rescuing folks and fighting rustlers and outlaws in the Wyoming Territory in the 1890s. 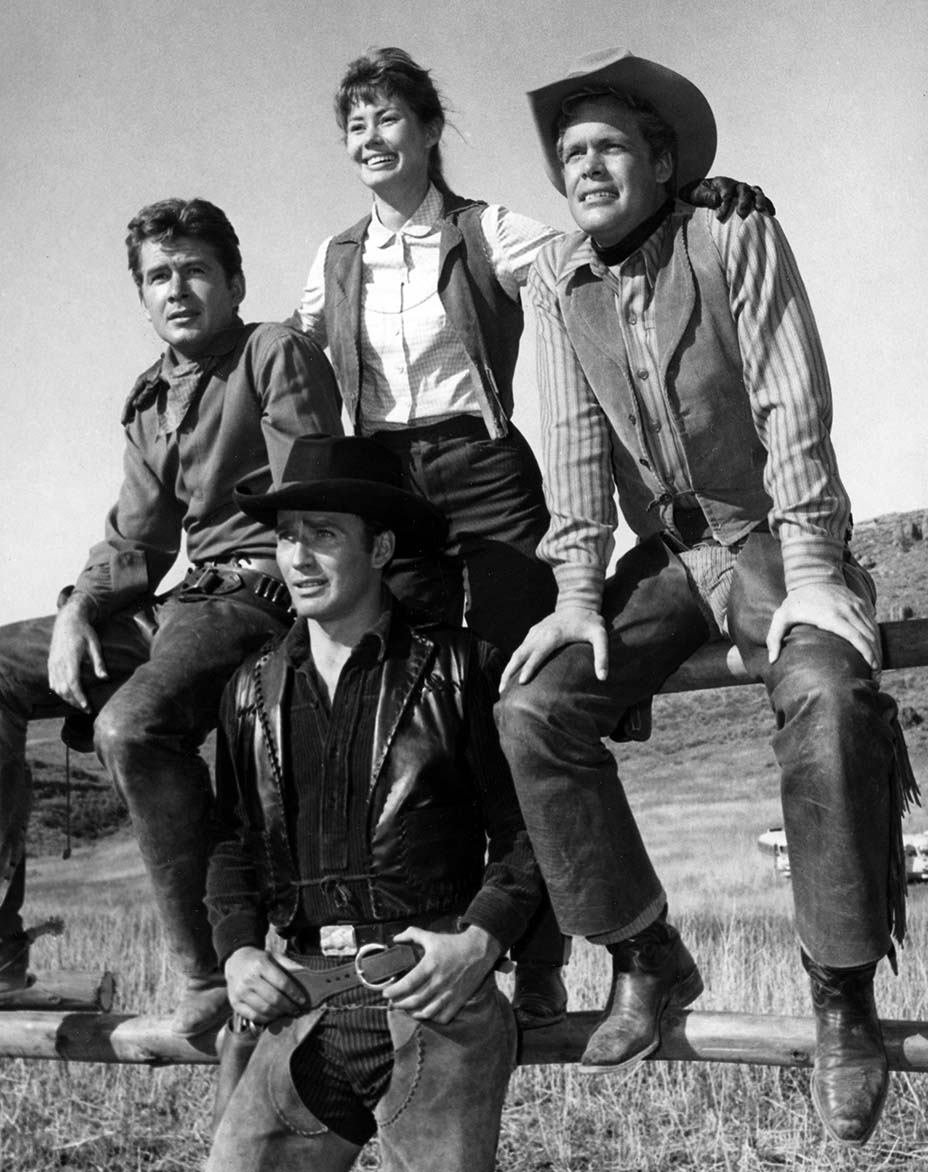 Each episode of The Virginian lasted 90 minutes, which made for a grueling production schedule.

“It was like doing a movie every week,” Drury said in a 2016 interview. “We had 79 minutes and 30 seconds worth of film, which was as long as a lot of feature films of the day. It was a very radical concept. I know Wagon Train went to a 90-minute format for one season, and there may have been other attempts. But no one has ever been successful with 90 minutes for a Western series except The Virginian.

Drury noted that producers had to turn in one episode every week. “But it took eight days to make one, so we had to make two or three at a time,” he said. “On one famous occasion, I was in five episodes of The Virginian in the same day.”

James Child Drury was born on April 18, 1934, in New York City, where his father was a longtime professor of marketing at NYU. His mother was from Oregon, and he spent most of his younger days on one of her family’s ranches outside Salem.

His maternal grandfather, John Crawford, who had come west with a wagon train from Missouri in 1875 or 1880, taught him woodsman skills and marksmanship and instilled in him the values that Drury said he brought to his Virginian character.

Drury overcame a bout with polio, and at age 12 appeared in a touring company of Life With Father. He attended high schools in Los Angeles and was expelled from University High on the day before graduation. However, because of his dad, he was able to get into NYU, and he majored in drama.

After his junior year, he was signed by MGM and had small parts in Blackboard Jungle (1955), Love Me or Leave Me (1955), The Tender Trap (1955) and Forbidden Planet (1956). He was dropped by the studio after a year but picked up by 20th Century Fox and then Universal.

He appeared on such small-screen Westerns as Cheyenne, Broken Arrow, Gunsmoke, Wagon Train and Rawhide and in an unsold 1958 pilot that made an earlier stab at The Virginian before he began his nine-season stay in fictional Wyoming.

In its last year, The Virginian was rebranded as The Men From Shiloh, but its ratings suffered. Asked in the 2006 book A History of Television’s The Virginian, 1962-1971 if he was relieved that the show had been canceled after such a long run, Drury responded: “I felt very sad. No relief. I had no need for relief. I would have gone on for another 10 years.”

Drury starred as Captain Spike Ryerson on the short-lived 1974 ABC series Firehouse and went on to guest star on Alias Smith and Jones, The Adventures of Brisco County, Jr., The Fall Guy and other shows. His big-screen résumé also includes the war film The Young Warriors (1967).

He played Texas Ranger captain Tom Price on the first three episodes of Walker, Texas Ranger in 1993 and had a cameo in TNT’s 2000 movie adaptation of The Virginian, starring Bill Pullman as the man with no name.

His third wife, Carl Ann, died in August; they were married for 40 years.

Survivors include his sons Timothy and James Jr. and their respective wives Kate and Kathy; stepchildren Frederick, Gary and Rhonda; four grandchildren; and several great-grandchildren. Timothy is a keyboardist who has played with Don Henley, Whitesnake, Stevie Nicks and Jon Anderson.