In typical fashion, a red-coated Fonda brought a number of famous friends with her, including Joaquin Phoenix with partner Rooney Mara and her sister Kate Mara, as well as Norman Lear, Brooklyn Decker, June Diane Raphael, Paul Scheer, Rainn Wilson, Bonnie Wright, Rosanna Arquette and Catherine Keener. The actors served as presenters for the number of climate change activists in attendance, many of whom have been affected by fossil fuel drilling in the Southern California area.

Phoenix’s presence, two days before he may walk away with a best actor statue at the Oscars, comes just three weeks after he was arrested for protesting with Fonda in D.C. and follows an awards season of anti-private jet and pro-vegan speeches.

“Every single bit matters — everyone who can raise their voice, and celebrities have a platform, and that use it like Joaquin, god bless,” Fonda told The Hollywood Reporter of his recent onstage activism, and also shouted him out during the rally for “walking the talk.”

As hundreds of supporters — many carrying homemade signs with messages like, “I’m with her” (alongside photos of Fonda), “Dear climate, you’ve changed,” “Diet change for climate change” and “Stop denying the earth is dying” — gathered downtown, Fonda said the rally will kick off a California (and later nationwide) tour with Greenpeace, and was unintentionally scheduled for Oscars weekend — a time when all eyes are on Hollywood.

“In the beginning, when I knew that I had to stop in D.C. because of starting [to film season seven of] Grace and Frankie I was depressed, but then I started to meet with the activists here in California and realized this is the place to be,” Fonda told THR. “California is the fifth-largest economy in the world and it’s a major oil-producing state, so what happens here can affect not just the rest of the country, but the rest of the world.”

With a push toward climate-protecting legislation as a part of the initiative, Fonda said she is not yet endorsing any of the Democratic presidential candidates, but that “Elizabeth Warren, Bernie Sanders and Tom Steyer have very good positions on climate.” 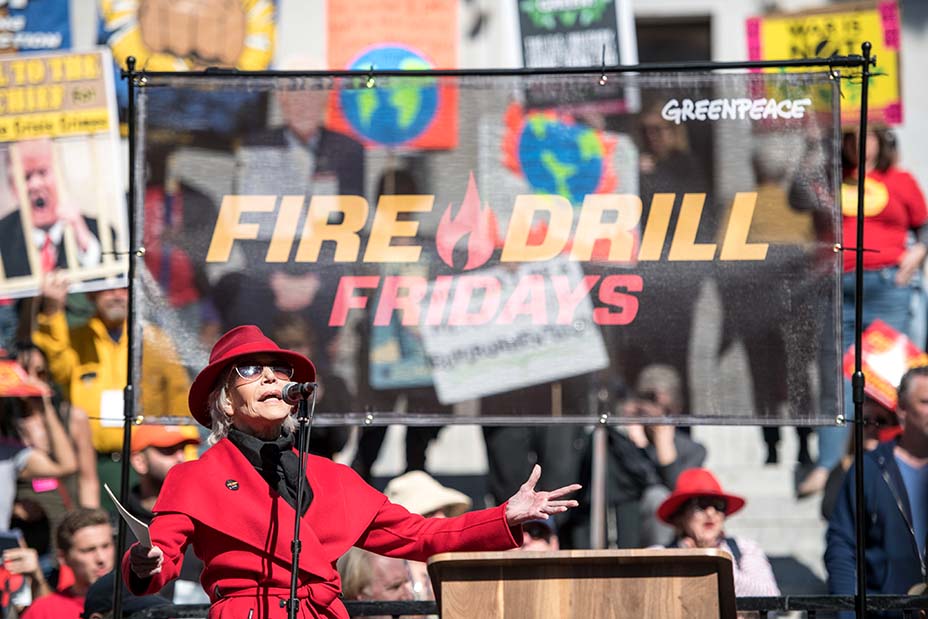 Following the crowd’s chants of “This is what democracy looks like,” “Hey hey, ho ho, Donald Trump has got to go” and “No hate, no fear, refugees are welcome here,” the star took the stage and said (via a solar-powered sound system) that through the Fire Drill Fridays, “we learned together and protested together and we chanted and sang together and we got arrested together. The purpose was to raise awareness of the urgency of the climate change crisis. As Greta Thunberg says, we have to act like our house is on fire because it is.”

Among Fonda’s calls to action are to reduce by half fossil fuel emissions in the next 10 years and get California Gov. Gavin Newsom to halt future fossil fuel projects and the creation of new oil and gas wells.

Bringing the starry ground of attendees onto the stage, she added, “this is so important when celebrities are willing to use their platform to bring attention to the climate crisis so let’s give them a big round of applause. Take your pictures quick because I’m going to wave a wand and they’re going to disappear. I’m so grateful to all of you, my friends, for being here, thank you so much.”

Phoenix later brought young environmental justice activist Nalleli Cobo to the stage, saying, “She’s also going to be our future president,” while Lear joked that “I have been enjoying living off of the planet longer than anyone else here,” adding, “I don’t have a hero bigger or more important than Jane Fonda.”

Following the rally, supporters marched through downtown L.A. in an act of civil disobedience, but unlike in Washington, D.C., no arrests were made.

How Joaquin Phoenix Vegan-ized Awards Season Behind the Scenes