Janie Bryant was tasked with a “costume designer’s dream” on CBS All Access’ Why Women Kill, whose story takes place in three decades simultaneously.

Premiering on Thursday, the dramedy follows a different husband and wife in 1963, 1984 and 2019 through the trials of their marriages while living in a Pasadena house. In the 1960s, Beth Ann (Ginnifer Goodwin) suspects husband Rob (Sam Jaeger) is having an affair. In the 1980s, Simone (Lucy Liu) discovers husband Karl (Jack Davenport) is gay. And in modern times, Taylor (Kirby Howell-Baptiste) and Eli (Reid Scott) reconcile with their open marriage.

Bryant was excited about telling the story through three eras of fashion.

For the 1963 period, Bryant drew on her experience as costume designer of Mad Men in creating a midcentury style with A-line dresses for doting housewife Beth Ann. At the beginning, her color palette is “very quiet, bland, dull and lifeless. Her character is quite modest; she is almost stuck in a time of the 1950s housewife. So she is quite meek and old-fashioned,” Bryant tells The Hollywood Reporter. She wears two strands of pearls (from Western Costume Company) in practically every scene, paired with a beige or light olive green dress with an apron — mostly designed by Bryant and made in a tailor shop on the CBS lot. “I love the idea of the two strand, because Jackie Kennedy used to wear the two stranded pearls, and I feel like it’s just so classic,” she says. 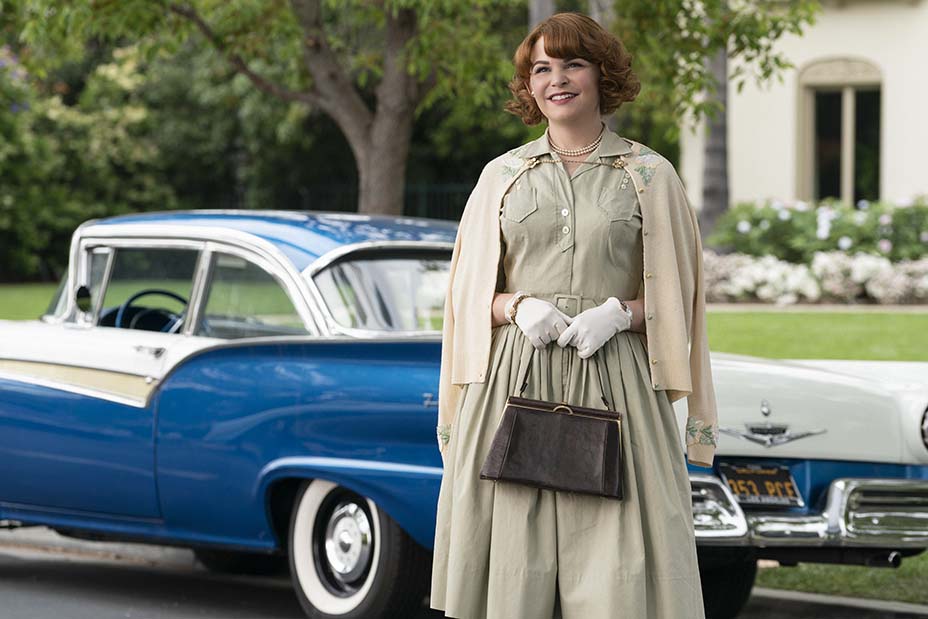 As the season progresses, Beth Ann gets more adventurous, experimenting with a pink dress and pumps for a “breakout moment” in which she’s trying something new to “seduce” Rob and gain confidence. The dress was vintage from Western Costume, though Bryant gave it a “facelift” and dyed some pumps hot pink to match the dress and added vintage shoe clips for a Roger Vivier effect.

The pearls are finally swapped out for a vintage jewelry set from Playclothes Vintage Fashions in Los Angeles — a two-tone purple and pink necklace with white flowers and beads and earrings to match. Bryant adds of Beth Ann’s progression in the season, “Her color palette does change with what’s going on in the story, and it’s kind of amazing.” 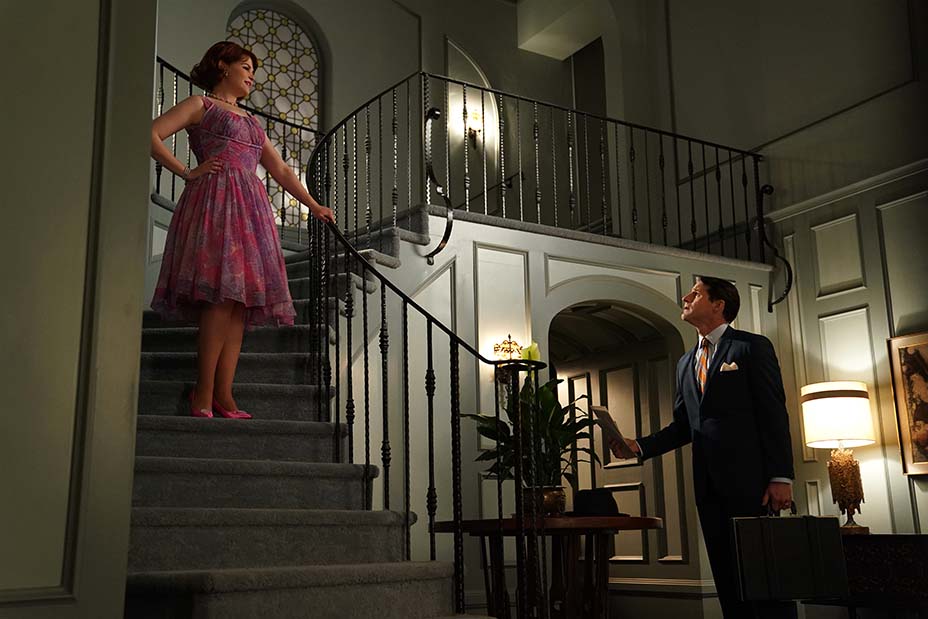 Bryant “relived” the ’60s again as she did for nearly a decade for Mad Men, though she says the styles differ in part because Why Women Kill takes place in Pasadena versus New York. “It’s more about knowing the period. In terms of Rob, of course he’s going to wear a skinny tie and he’s going to have a very classic 1960s suit. Gosh, for Mad Men, I did how many thousands and thousands of suits?” she said with a laugh.

For the 1980s era of Why Women Kill, Bryant got to have a bit of fun with wild colors, costume jewelry, over-the-top furs and even an iconic 1980s workout scene with real vintage neon aerobics clothes, which presented a particular challenge since “elastic doesn’t last forever.” 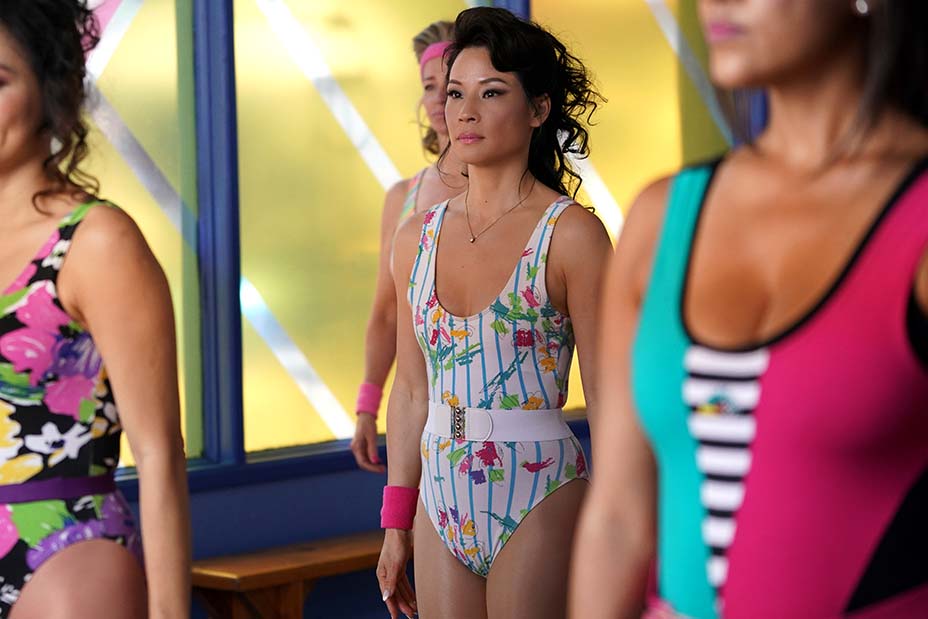 The character is “definitely into couture designers” of the period, such as Yves Saint Laurent, Christian Lacroix, Givenchy, Bill Blass and Geoffrey Beene. Elizabeth Taylor was another inspiration and, given the actress was known for her jewelry collection, Simone likewise has a mega-carat collection of diamonds, emeralds, sapphires, rubies, you name it (granted, they’re costume jewels). “It’s opulent — it’s diamonds, diamonds, diamonds,” Bryant says. 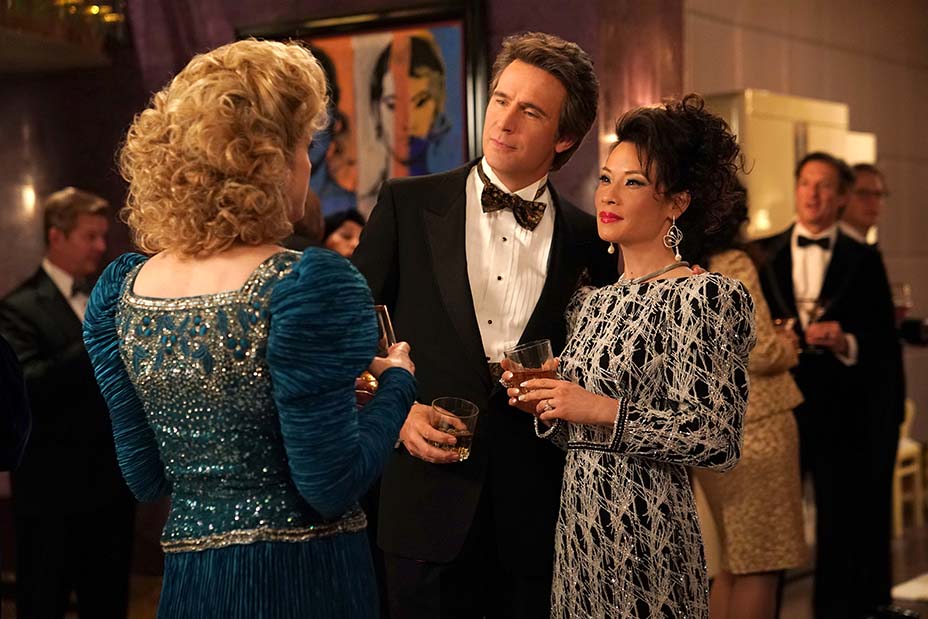 The gems are paired with big shoulders, beaded fabrics, lots of ruffles and printed silks. In the first episode, Simone throws a party at her mansion wearing a black embellished gown designed by Bryant: “I wanted her to be the brightest shining star in the room of her party.” Later, she wears a pink suit with white peplum detailing, which was vintage from the CBS costume shop.

Another stand out comes when Simone is lounging in her living room in a pink silky robe uncorking a wine bottle and surrounded by “a few of my favorite things,” meaning mounds of heels and furs, some of which were from Bryant’s own vintage collection, including a red fox purchased in the ’80s at Neiman Marcus.

And finally, in 2019, Taylor is a queer, feminist lawyer, so the character needed a professional office wardrobe with accessories to emphasize her personality, whether it’s tassled earrings or a headscarf.

“I really love the idea for her costume design to be about incorporating the masculine and the feminine,” Bryant says. “I really wanted to implement an edge that was more about her jewelry. [She] really possesses a lot of masculinity in her character.” That shines through in various colored metals, oversized earrings and stacked rings (from brands such as Lionette and Peggy Li) that pair with a black blouse or a certain yellow bodycon dress by Karen Millen for a contemporary look.

Why Women Kill premieres Thursday on CBS All Access. 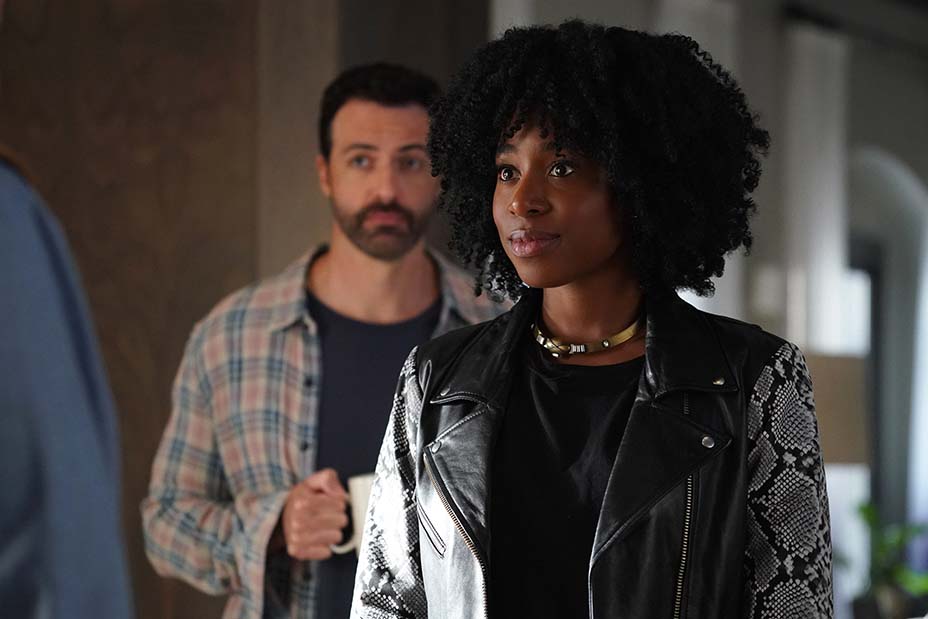