On Oct. 22 David Letterman will be honored with the Mark Twain Prize for American Humor at the Kennedy Center in Washington, D.C. The award, which has been handed out annually since 1998, celebrates the achievements of American comedic talents and has been awarded to such past honorees as Richard Pryor, Steve Martin, Whoopi Goldberg, Ellen DeGeneres, Eddie Murphy, Will Ferrell, Bill Murray and Jay Leno.

When we started out together in the early 1980s, Dave’s performance skill wasn’t quite there yet because he hadn’t done it enough. But he was a natural. When I first met him, I asked him, “How can you be so natural up there? I’m scared to death.” He said, “Ah, I just do it.”

The best days of my career were doing Late Night With David Letterman. My favorite thing to do before the show was when Dave was coming down the hall to makeup, I would hide around the corner and I would get a huge meatball sandwich. When I knew Dave was coming, I would start to eat it, and he’d be like, “What are you doing? How can you eat before you go on?” I would keep trying to get him to eat it and then I would start bringing the sandwich on the show. We were just two opposites, you know?

I remember I had this thing where I would go into the audience and shake hands when I came out. One day, I was watching Dave, and he steps in front of this big Plexiglas wall and puts his hands through with two rubber gloves on and he’s shaking hands with people. It was really funny. It was the exact opposite of what I do, and that was the joke. The one thing about Dave was, even when he was mean to me, it was funny, and that’s all that matters.

The idea that there was a huge rift between me and Dave — yeah, of course there was. I think Dave felt really sad he didn’t get The Tonight Show. And our shows were very competitive. Whether it’s two sports teams, or two boxers, you can trash talk each other, but it doesn’t mean you don’t respect each other. I think there was a mutual admiration. It’s not that we have a lot in common — we don’t — but I think that we have a mutual admiration for each other’s ability to make each other laugh.

Of course, some of [the rivalry] was serious, but you have to be reasonably thick-skinned if you want to do this for a living. But it’s all right. If it’s funny, all bets are off. When other people go, “Leno’s an asshole,” well, that’s not funny, I’m sorry. But Dave would always go about it in a funny way. There was no animosity there. Comics have a bond: You have more in common with your worst enemy if they’re a comic than you do with your best friend, because you share something that regular people just don’t get.

I haven’t spoken to Dave recently. He can be a quirky character. It’s just Dave being Dave. When I see him with the beard, I smile because other people go, “Why does Dave have that beard? He looks creepy.” That’s just his sense of humor. But I’m thrilled that Dave is getting the Mark Twain award. It’s a great award — it’s Mark Twain! And it gives my Mark Twain Prize [in 2015] credence. 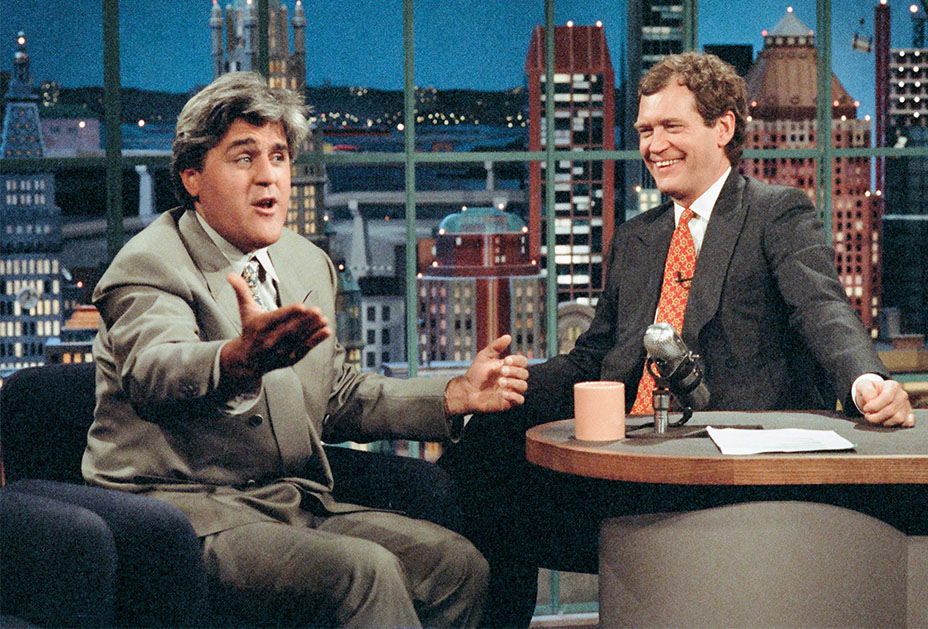 “EVERYBODY FELL IN LOVE WITH HIM”
More salutes to Dave, from his longtime sidekick and band leader as well as the competition across the dial.

“Dave came with his own style of comedy — a combination of old-fashioned talk show and a new type of improv — and everybody fell in love with him.” (Shaffer and his band will perform at the Kennedy Center event.)

“Mark Twain was a riverboat pilot, journalist, entrepreneur, inventor and the most important humorist of his generation. David Letterman is one of those things, too.” (Kimmel, along with Bill Murray and Martin Short, will attend Oct. 22.)