Jenna Lyons, former president and creative director of J. Crew group, and Sheila Nevins, president of HBO documentary films, are an unlikely pair of besties (“I don’t know anything about film,” Lyons admitted during Glamour‘s Women of the Year Summit).

But despite their differing ages and career backgrounds, the duo are a riot — and they proved as much during a panel titled “Band of Sisters” at Monday’s conference, where Lyons asked Nevins questions about the early days of her career in the ‘60s, when sexual harassment was the norm and the wage gap was even greater.

But before they dug into the meatier issues, the women described just how their unlikely friendship was forged. Turns out, it all started when Lyons took a trip to the gynecologist.

“Four years ago, I was at my doctor’s and I was on the 50th round of medicine for a urinary tract infection — not fun,” said Lyons. After she had become immune to nearly all antibiotics, her doctor recommended an experimental treatment and offered to put her in touch with another patient who had found success with it.

“He gave me a name — just a first name. Sheila, that’s all I knew,” said Lyons, who only found out who the other patient was after Nevins‘ secretary picked up the phone. “Can you fucking imagine?” she continued. “I knew who she was, I’d read about her, and she picks up the phone and the first words out of her mouth — no joke — are, ‘Tell me about your vagina.’ And that’s where we started.” 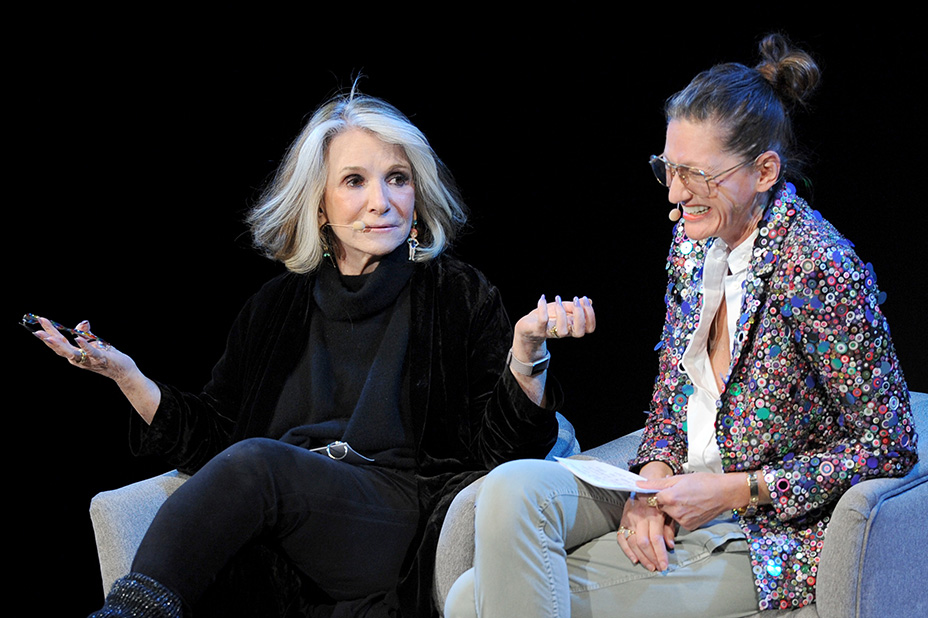 As part of the pair’s playful banter, Nevins interjected, “Can I talk? It’s my vagina.” She went on, “Well, I mean, I’m old, and my vagina had kinda dried out … Someone told me about a woman who had this excessive vitamin D treatment, and I did it because I was pretty desperate, and my vagina recovered.”

Of the fateful doctor who put Nevins and Lyons in touch, she recalled, “He said, ‘Would it be all right if someone calls you about your vagina,’ and I said, ‘That’s fine.’ And so that’s how we fell in love.”

Nevins‘ use of the word “love” incited a bashful Lyons to reply, “Don’t get any ideas. My son is watching this somewhere . ..I don’t want him to think I mean, you know …”

To which Nevins replied, point blank, “Well, I’m straight and you’re not.” The audience roared with laughter.

Throughout their 15 minute chat, the pair heaped the love on each other (“I love Jenna because she’s so fucking real,” said Nevins. “And also, look at how we’re dressed. She’s fashionable and I’m like in the dirge outfit”) with hilarity in tact. When an audience member asked a question that began with, “You’re both extremely successful,” Lyons retorted, “I don’t have a job!” while Nevins followed up, “And I’m old! Sit down and ask your question again!”

Consider this my formal plea for the Jenna Lyons and Sheila Nevins talk show.