Continue to The Hollywood Reporter SKIP AD
You will be redirected back to your article in seconds
Skip to main content
September 24, 2019 10:52am

Maria Grazia Chiuri was feeling green. The Dior artistic director created a magical forest on the outskirts of Paris, transforming the city’s racetrack for the spring-summer 2020 collection.

That meant 164 trees were trucked in from all over Europe and will be planted around Paris. Last year, Chanel cut down 30 old-growth trees from local woods for its runway and was criticized by French environmental groups. During Milan Fashion Week, Gucci made a similar gesture by planting a tree for every guest at its spring-summer 2020 show on Sunday.

Grazia Chiuri said that the move by the house of Dior was a “symbol signifying that everyone can contribute to the cultivation and preservation of nature’s beauty — and our future.”

Guests wandered through the trees with earth underfoot in full-length gowns, tagging themselves and the QR codes that showed where the trees will be planted.

The set charmed Monica Bellucci. “We need to connect with, communicate with something real. The show feels like a moment of femininity and the sensibility of Maria Grazia is marvelous,” said the actress, praising the light dappling through the faux forest.

She sat front row and was game to take dozens of photos with fans. Bellucci just chopped her trademark long locks into a chic bob. “I like to change, and I’m enjoying something new now,” she said.

Jennifer Lawrence, who took her seat early before retreating backstage after being besieged by throngs of photo takers and flashbulbs, and her Hunger Games co-star Julianne Moore, who emerged just as the lights went down, were also among the guests at the show that was the de-facto opener of Paris Fashion Week.

Models walked among the maze of maples, oaks and elms in gauzy gowns embroidered with flowers that were reminiscent of Grazia Chiuri’s first couture collection three years ago, but here the layers of tulle were in more subdued colors and grounded with laser-cut combat boots. 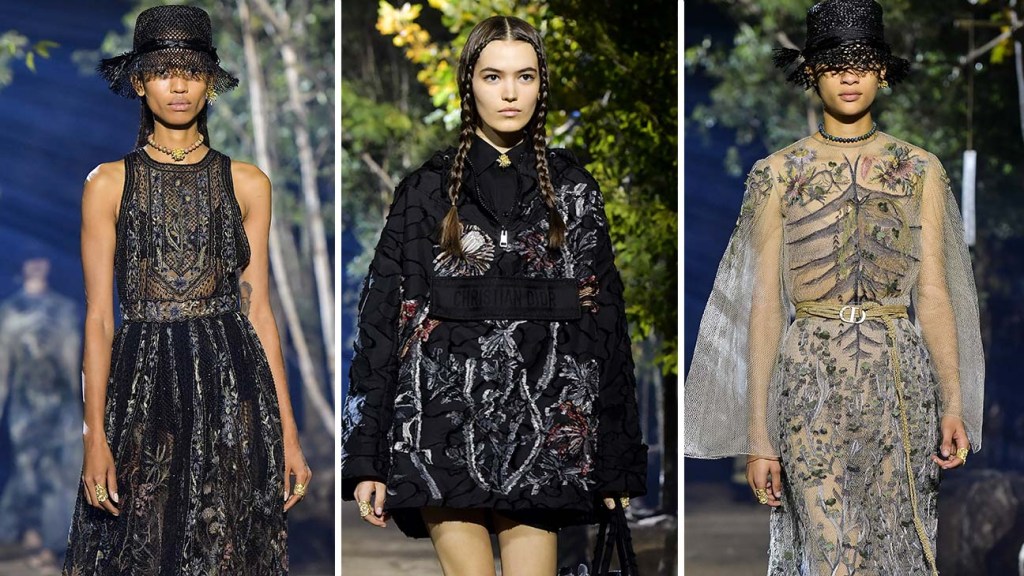 Dior’s signature long ballerina skirts and bar jackets were given a nod in camel houndstooth, while tie-dye made a play on loose denim suits and skirts in in earth tones and light pastels and sweaters were deconstructed with strategically hanging threads. Everything was topped with raffia bucket hats from longtime collaborator Stephen Jones.

Paris has been preparing itself for Fashion Week protests following Extinction Rebellion’s march during London Fashion Week, though similar calls for demonstrations from yellow vest activists didn’t amount to much last season as brands covertly changed their venues — though it did result in a big fashion moment for Louis Vuitton.

Grazia Chiuri said the collection was meant to raise questions about how we are treating the planet: “We are living in the Anthropocene era, in which man rules the planet; is it still possible to reestablish the balance of this relationship?” She said she hopes the world can become a place of co-existence and diversity.

The collection seemed to be Grazia Chiuri’s answer to the growing call for fashion to become more sustainable, so perhaps it was no coincidence that models’ long hair was styled in center-parted Greta Thunberg-style braids.