Hours before one last dress rehearsal on Thursday, stylist Rob Zangardi and his longtime client Jennifer Lopez were still mulling over the final lineup of costumes for the pop diva’s It’s My Party tour. “Things could change last minute,” Zangardi told The Hollywood Reporter by phone on that hectic day. “In fact, I know they will. This is such a special show for Jennifer, so the looks have to be perfect.”

Lopez’s anticipated set of concerts — which kicked off over the weekend at The Forum in Los Angeles — will span more than 30 dates across multiple continents, marking her first world tour in seven years. The tour also serves as an extended celebration of the singer’s upcoming 50th birthday on July 24. With the help of Zangardi, Lopez is ringing in another year in style and with major sparkle.

For the It’s My Party tour, Zangardi pieced together 195 costumes in total, including 19 for Lopez herself and 176 more for the dancers and band that are covered in hundreds of thousands of Swarovski crystals. (The Swarovski crystal count tops one million, as the tour’s set — including a dazzling piano and giant chandelier — is also blanketed in bling.)

“Sparkle is incredibly effective for a big show like Jennifer’s. On stage, things translate so differently. When you have an intimate setting or a smaller venue, it’s important to see the artist’s face, what they’re doing and not distract too much with the costumes,” said Zangardi. “But when you’re performing for 20,000 people in an arena, the people way in the back need to see you and nothing’s more exciting than seeing J.Lo shining like a diamond onstage.”

He added, “And that’s a J.Lo staple. Jennifer has always loved the sparkle, the jewelry and the more-is-more mentality — for everything that she does.” 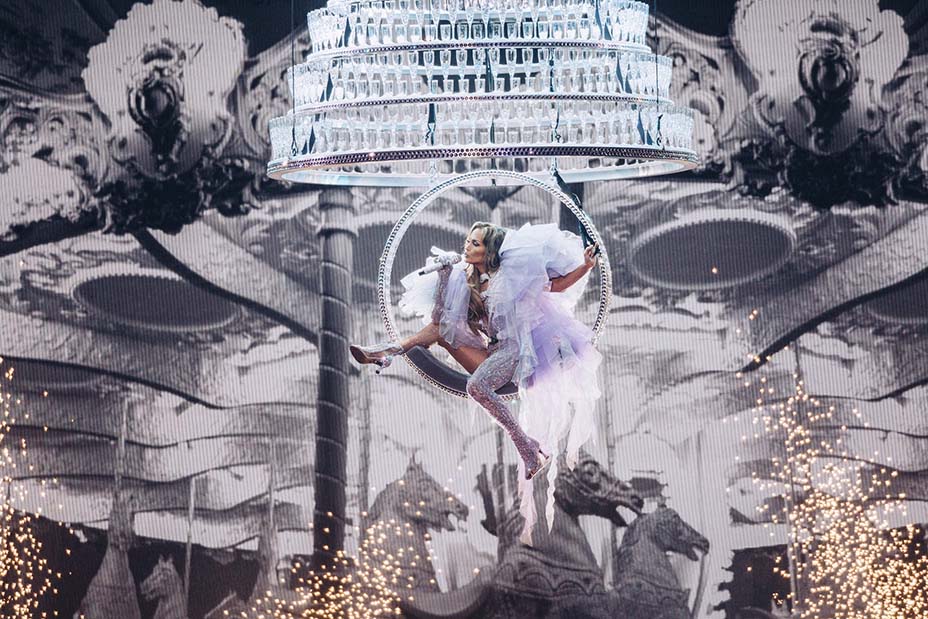 Another J.Lo staple? Versace. Nearly two decades after donning that impossibly low-cut green dress at the 2000 MTV Video Music Awards — which ultimately inspired the advent of Google Images and cemented Lopez’s status as a style icon — the superstar routinely turns to the Italian fashion house before hitting the red carpet and, of course, the stage. It’s no surprise then that the It’s My Party show begins with Lopez garmented in a silk lavender jumpsuit paired with ruffled tulle wings by Atelier Versace, descending from the ceiling seated in a glittering ring before launching into an energetic performance of her latest hit, “Medicine.”

“We put together mood boards, based on Jennifer’s idea for each section with color palettes and an overall vibe. She’s super involved,” Zangardi said of his creative collaboration with Lopez. “And then what we do next is reach out to the designers who make sense for each one of those sections, ones who we have relationships with or who Jennifer wants to make sure are in the show. One of them always is Versace, so we’ll reach out to their team and give them the concept.”

The stylist — who works with more A-listers, including Gwen Stefani and Jessica Biel, among others — continued, “Then we go back and forth with the design process. There’s a couple of sketches. I will make tweaks before we get it to a place where we can then pitch it to Jennifer again. And then she has the final say.”

Along with Versace, Zangardi and Lopez eventually settled on an eclectic assortment of custom creations from the likes of Namila, The Blonds, Michael Costello, Guess, Zuhair Murad, Nicolas Jebran, Giambattista Valli, Balenciaga and Marchesa. The latter designed matching red gowns for both Lopez and her 11-year-old daughter, Emme, who performed a touching duet of mom’s 2018 power ballad “Limitless” at Friday night’s sold-out concert in L.A. 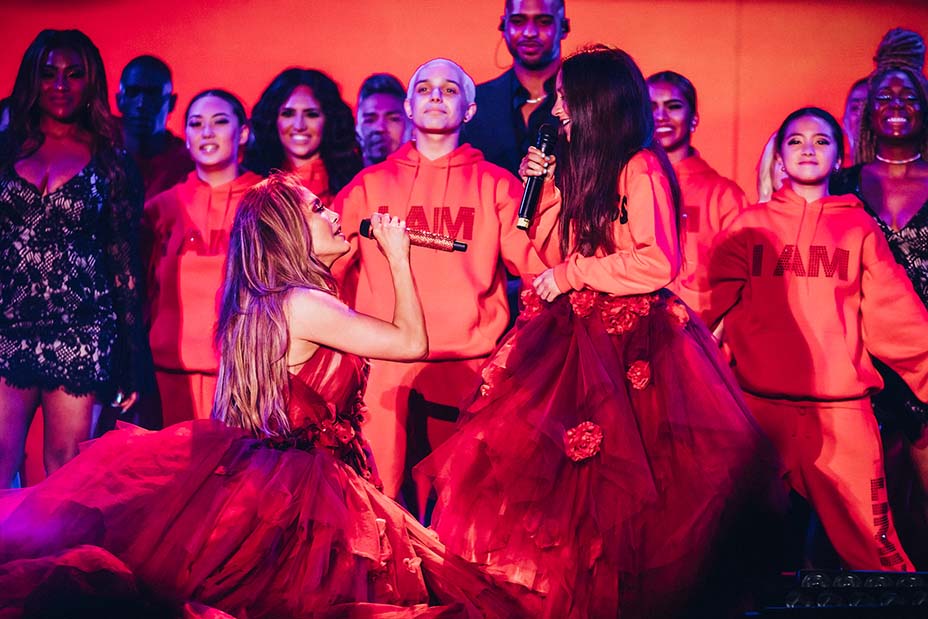 The summer tour contains many of the same elements from Lopez’s All I Have Las Vegas residency, which wrapped at Planet Hollywood’s Zappos Theater in September following 120 performances. But Zangardi — who also styled the Sin City project — told THR that Lopez made a concerted effort to remix her stage show, not only with a new setlist but with unexpected sartorial choices for her on-the-road party.

“In Vegas, for her hip-hop section, it was sweatpants, jerseys and graffiti print. And for this round, we decided to go with a more sleek bank robber vibe. So we’re taking twists like that throughout. J.Lo really understands the impact of fashion in a show like this,” Zangardi said of the recent CFDA Fashion Icon Award winner. “In what she does as an artist, she is always telling a story — with every film, with every music video, with every performance, with every red carpet. She always wants to deliver on the fashion front, and with this tour, she is doing just that.”

Lopez’s It’s My Party tour will next make its way to San Diego tonight at Pechanga Arena. The North American leg will conclude at Miami’s American Airlines Arena on July 27. Its international run begins on Aug. 1 in Tel Aviv and ends on Aug. 11 in St. Petersburg, Russia. See more looks from the show below. 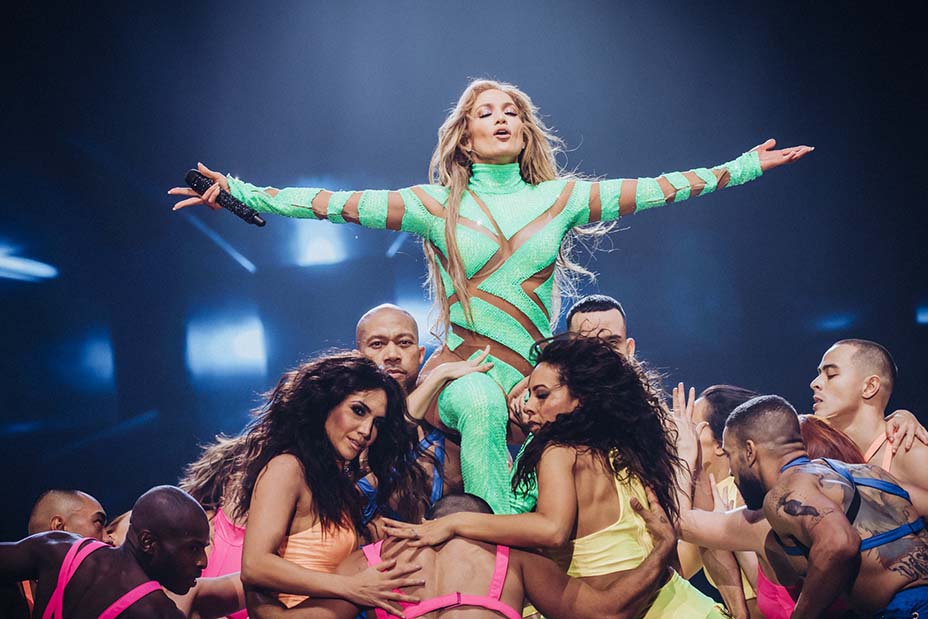 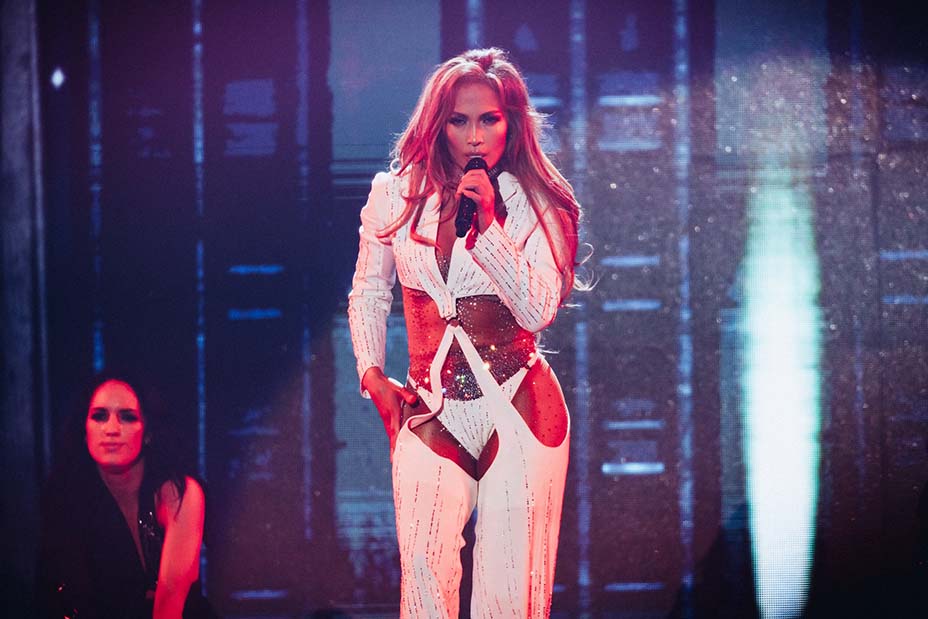 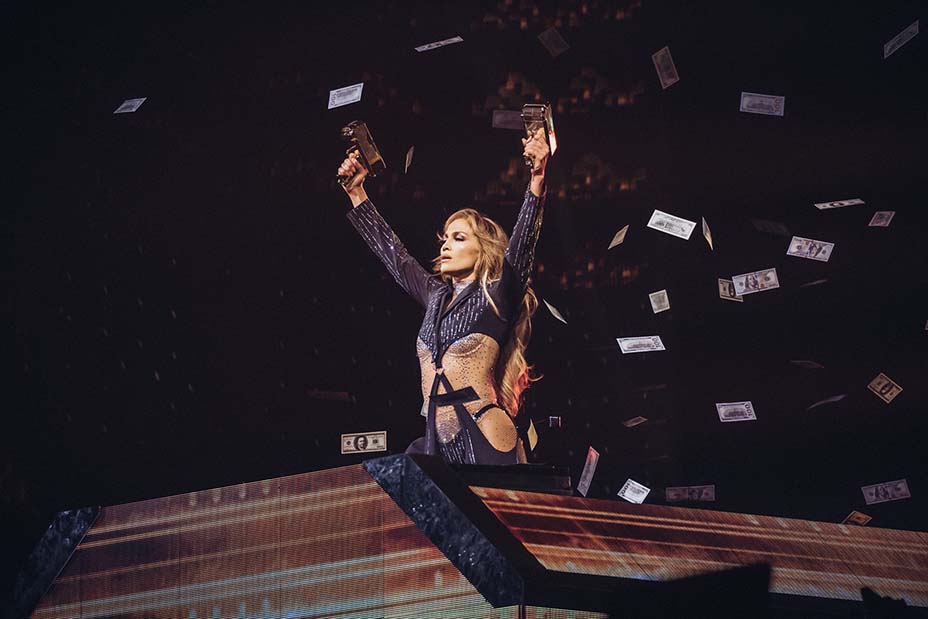 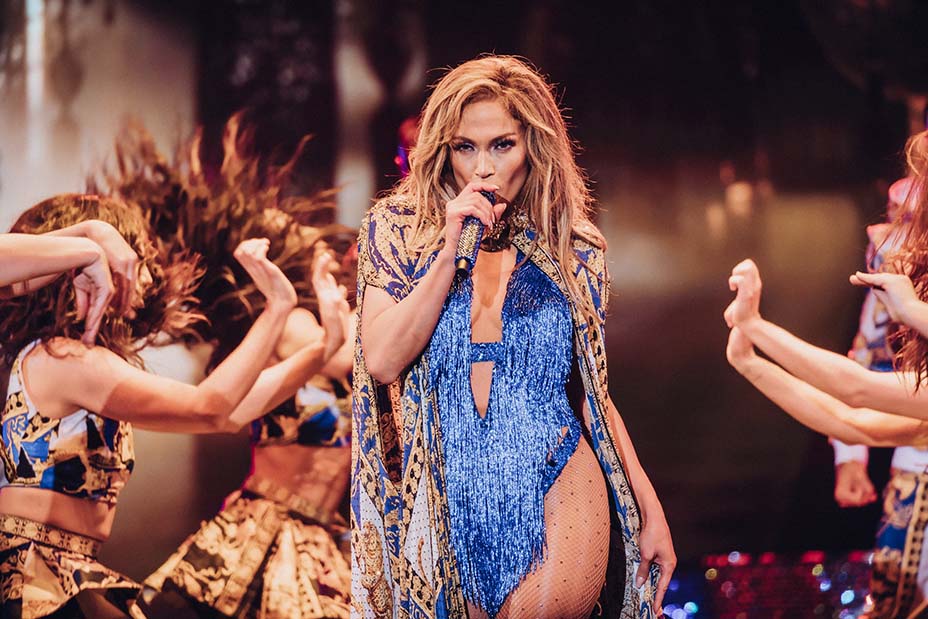 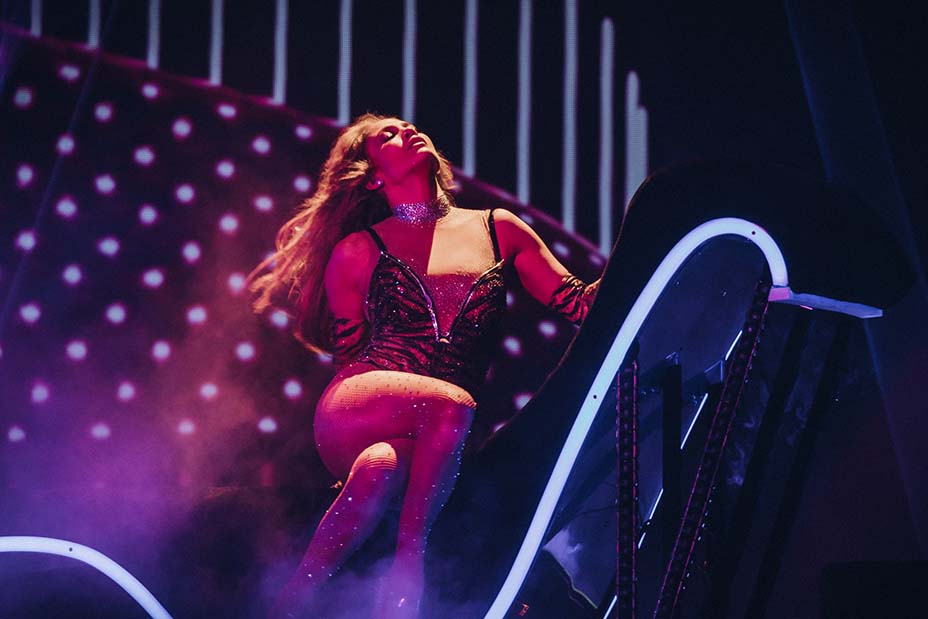 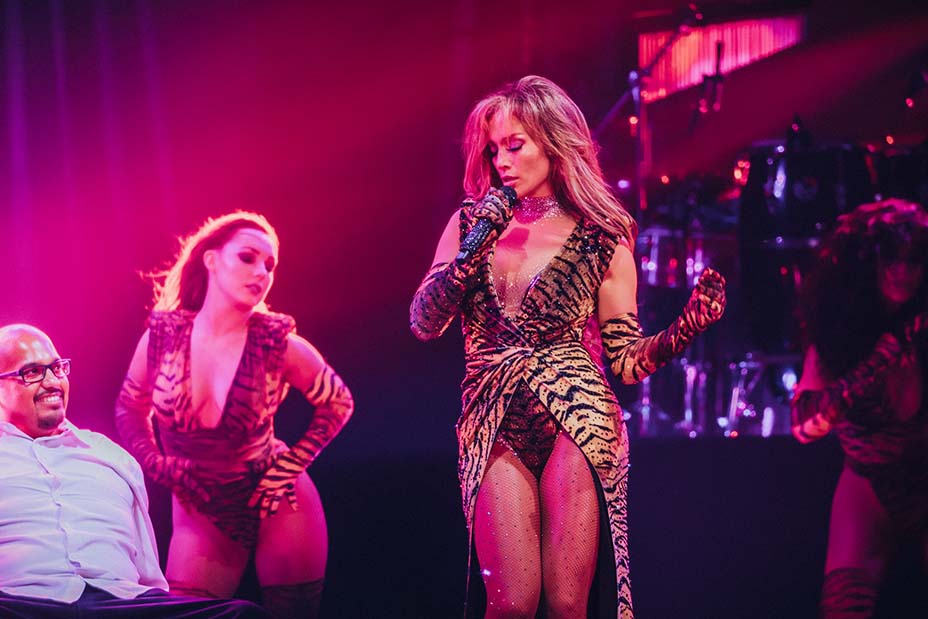 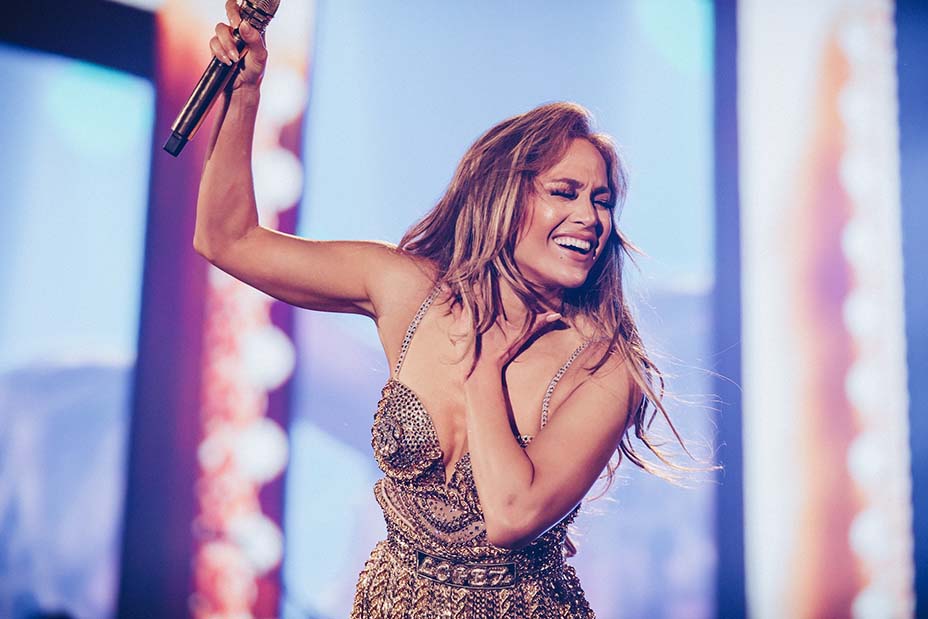