Jennifer Lopez stunned in multi-layered Versace costumes during her Super Bowl LIV halftime performance at Hard Rock Stadium in Miami on Sunday. While wearing a tulle “flag” dress with the American flag on one side and the Puerto Rican flag on the other, she sang “Let’s Get Loud,” including the lyrics, “Ain’t nobody gonna tell you what to do,” and “Born in the U.S.A.”

Lopez’s daughter, Emme, also sang alongside her mother, “as the symbol of the American dream,” Lopez told Page Six prior to the show. 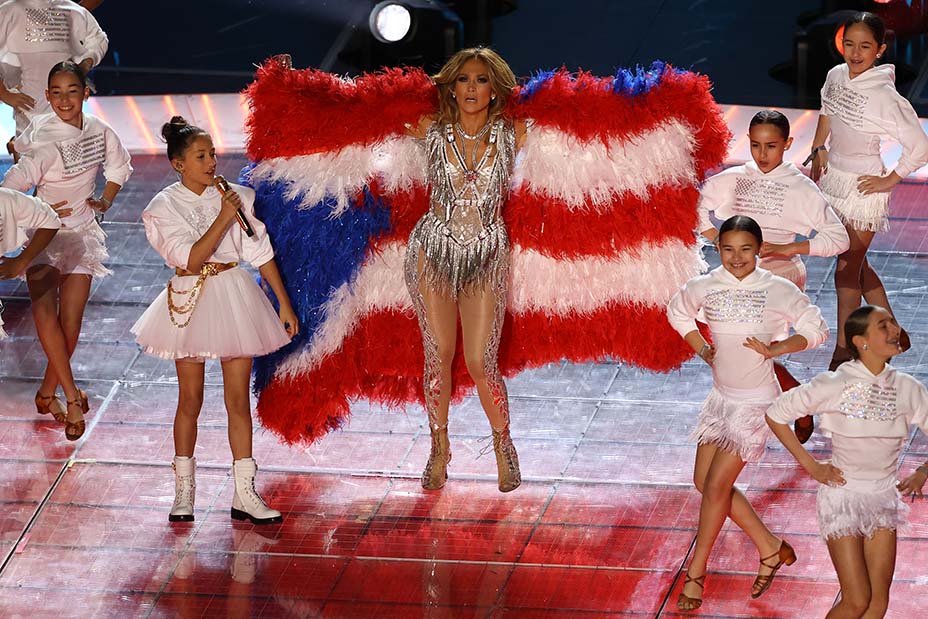 Rob Zangardi and Mariel Haenn, the styling team behind Lopez, talked exclusively to The Hollywood Reporter about the mammoth undertaking of dressing the Latin superstar and her 130 dancers.

“We designed 213 costumes and 143 pairs of shoes for this six-minute show, while for her tour we did 140 costumes for a two-hour show,” says Zangardi. 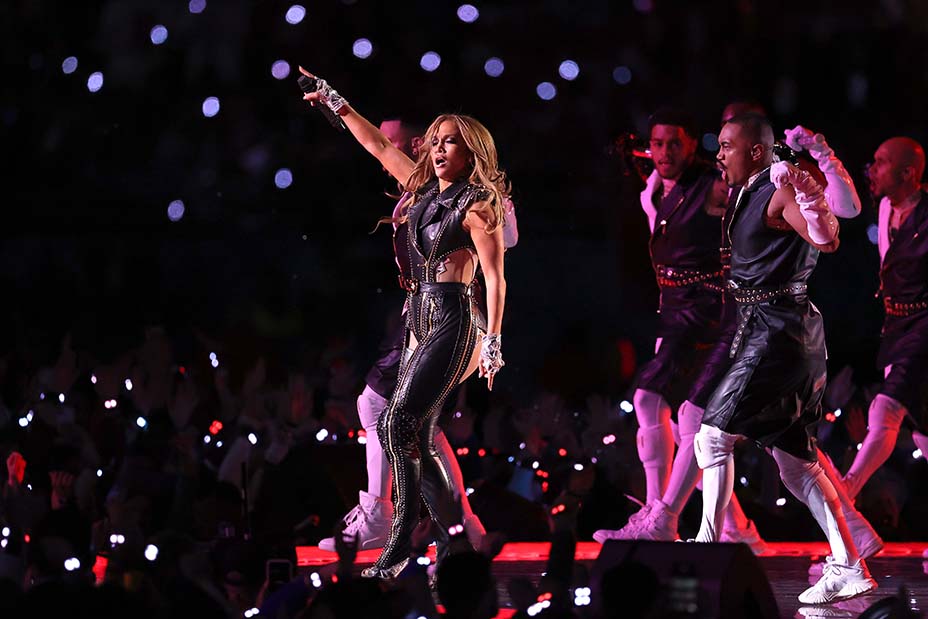 Zangardi and Haenn have worked with Lopez since 2011, designing her looks for red carpet appearances and tours, her three-year-long Las Vegas residency and gigs including hosting the American Music Awards and performing at the World Cup. The Super Bowl halftime show, however, presented an entirely new challenge with its big-budget, bombastic spectacles.

Prep started in September, with the first meeting taking place in Lopez’s trailer on the set of Kat Coiro’s upcoming film Marry Me. “We knew we wanted Versace to do the costumes immediately,” says Zangardi. “Nobody does stage costumes like them when it comes to a Jennifer Lopez performance, especially at this level.” 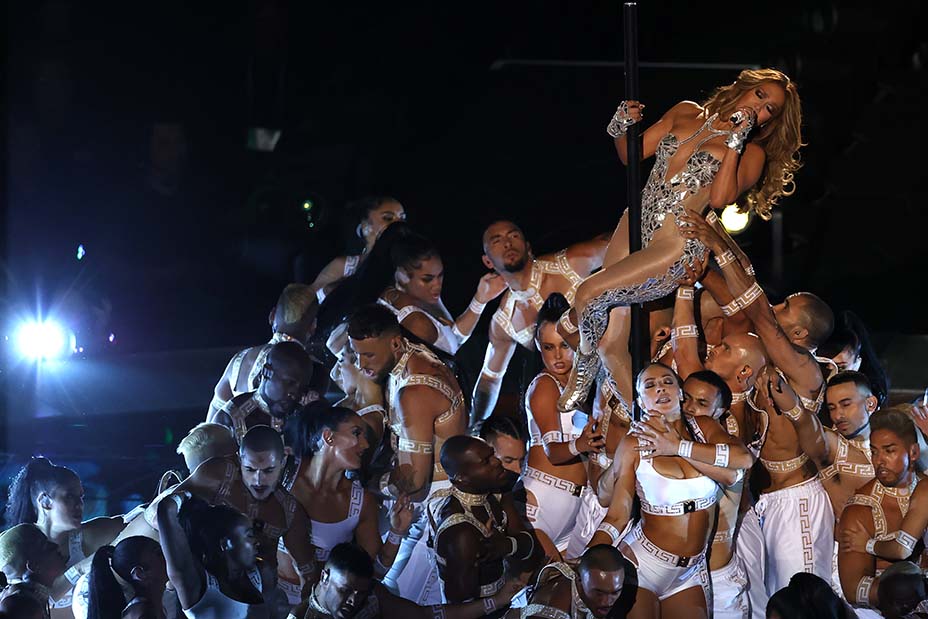 Versace and Lopez have a relationship that goes back years, most recently with her fronting the Italian fashion house’s spring 2020 campaign. “Versace was really excited to work with us and Donatella was involved from the very beginning,” adds Zangardi. “We all sat down while we were shooting the campaign last year, went through our ideas and the set list, and she has been signing off on everything along the way.” 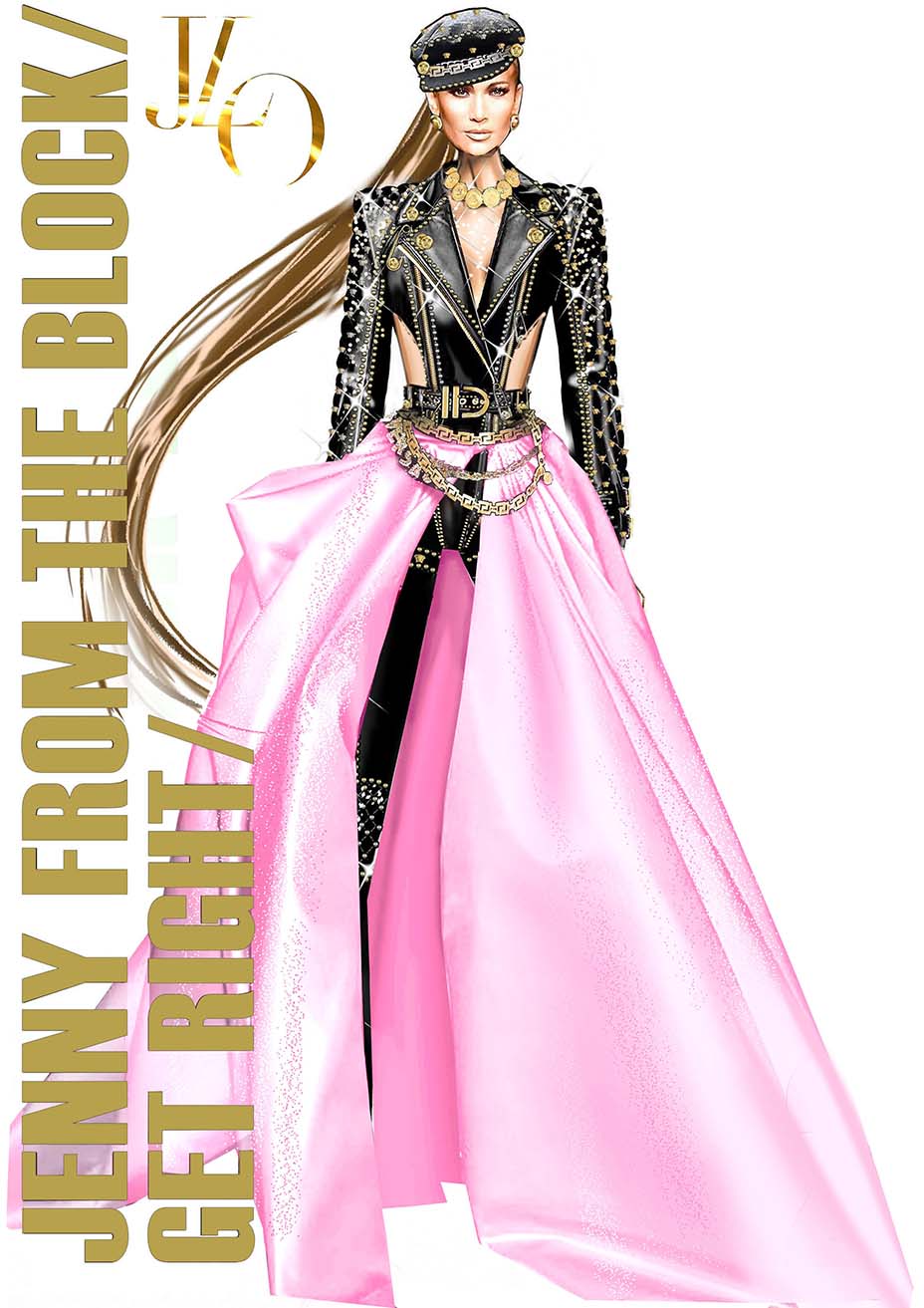 The process began with an original concept and an overall vision that transformed into sketches, taking into account the set list and the real-life challenges of pulling off that vision in just six minutes. “Because Jennifer never leaves the stage, we knew when designing the costumes that everything needed to be layered or added on,” says Haenn of the particular challenge of this show. “While we do a lot of quick changes on tour, for this performance the longest change is just seven seconds. Simply getting stuff on and off is something we’ve had to rehearse and refine over and over again to make it look seamless.” 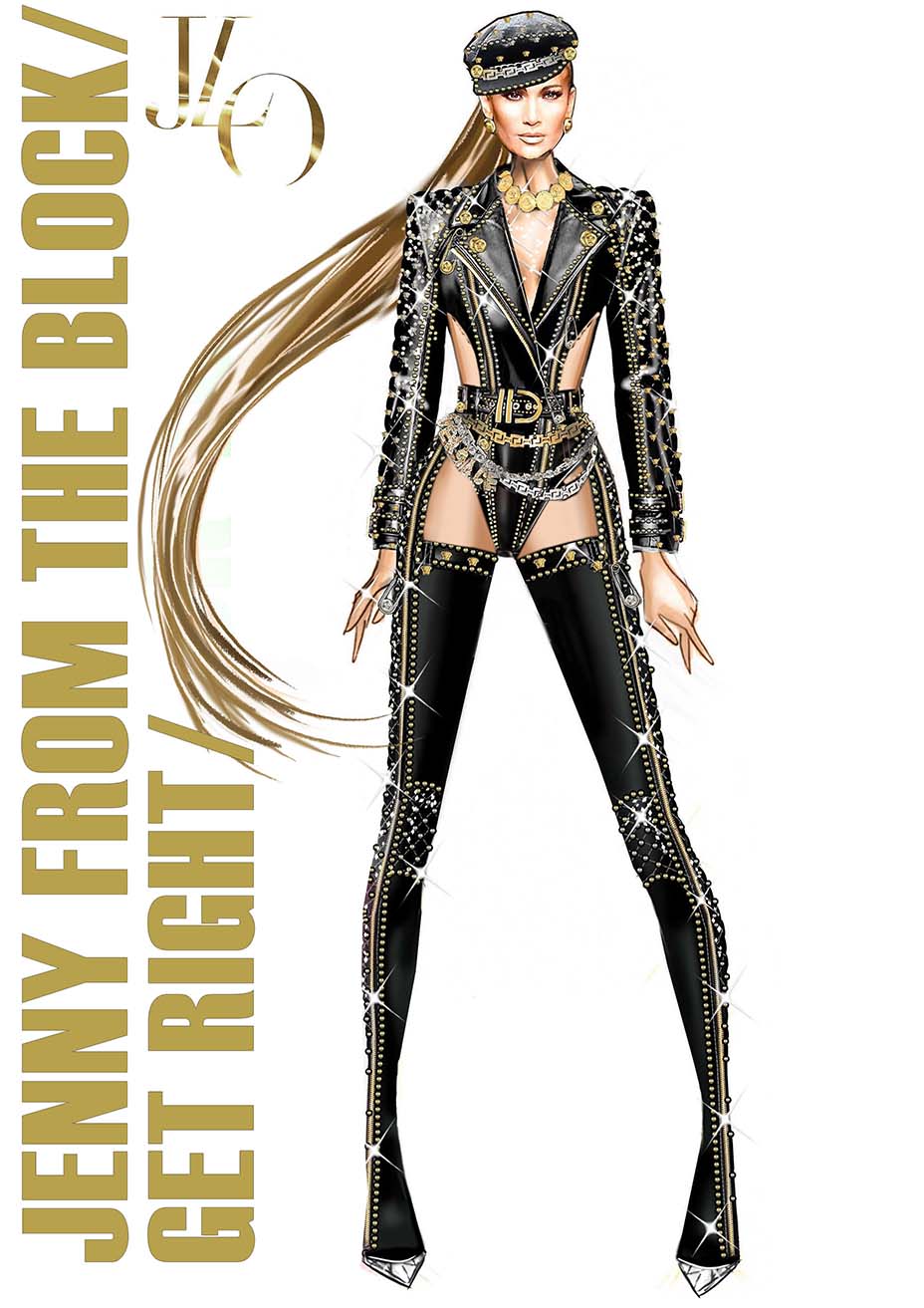 When it came to the drawing board, for her first look Lopez gave Haenn and Zangardi a photo from a Marlon Brando-inspired 1991 Vogue shoot by photographer Peter Lindbergh called “Wild at Heart.” “That was the jumping-off point,” says Zangardi.

Versace came back with a black leather sleeveless biker bodysuit embellished with gold studs, medusas and crystals (which took over 400 hours to attach) and matching leather skintight chaps studded with black crystals. The toughness of the look was then offset with a light pink silk satin ball gown crafted from seven meters of duchess silk. 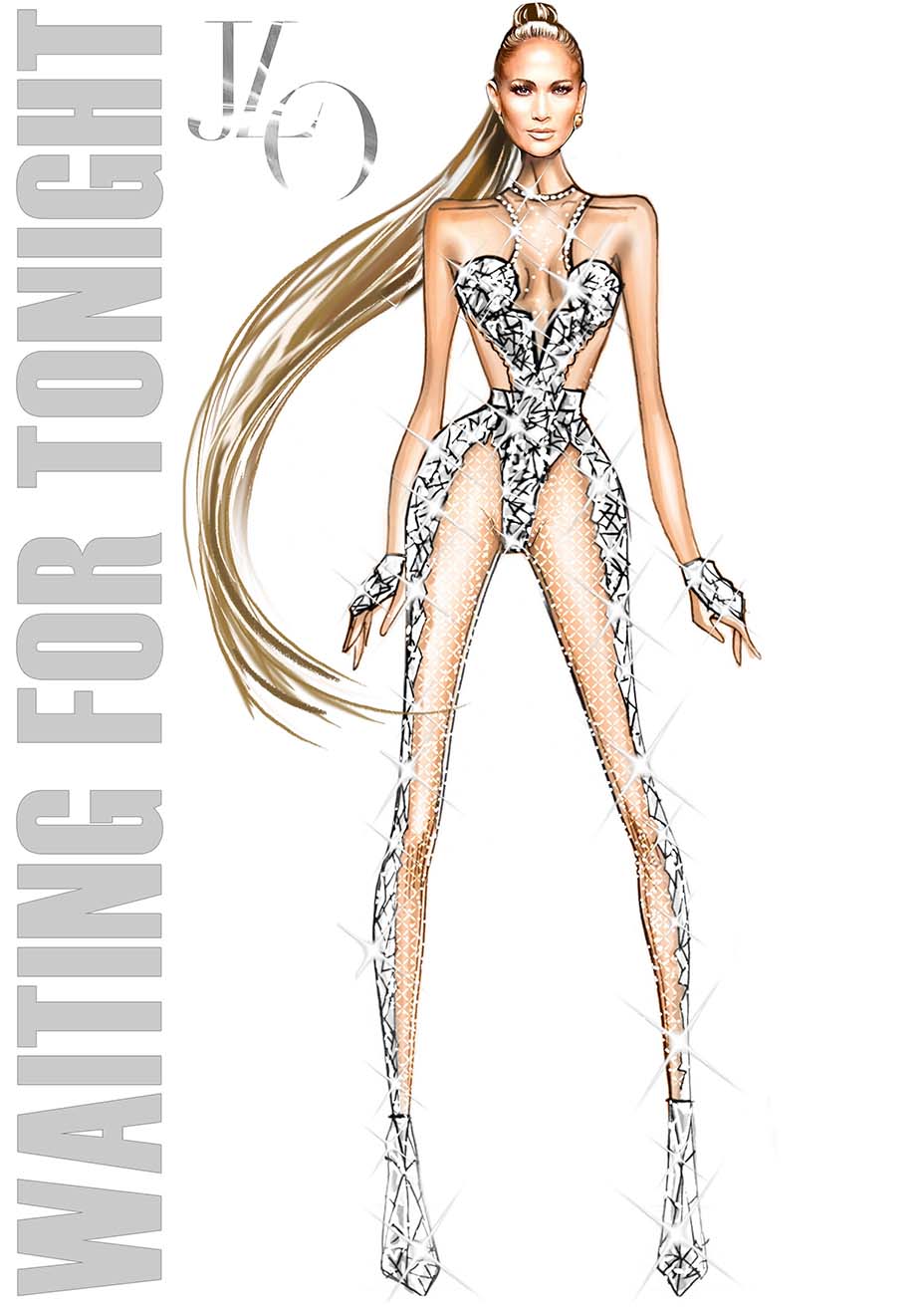 For the second look, the team wanted to go for a classically sexy bodysuit. “That’s something everyone wants to see her wearing,” says Zangardi of the silver leather catsuit made of 800 pieces of silver leather individually cut to mold to the body.

The suit was embellished with 12,000 pieces of silver sequins and surrounded with 15,000 Swarovski crystals all hand sewn onto a skin-tone tulle. “Versace took over an entire leather factory in Italy to create the leather pieces,” says Haenn. “In total, over 30 tailors and seamstresses were involved in the process and it took thousands of hours of handwork.” 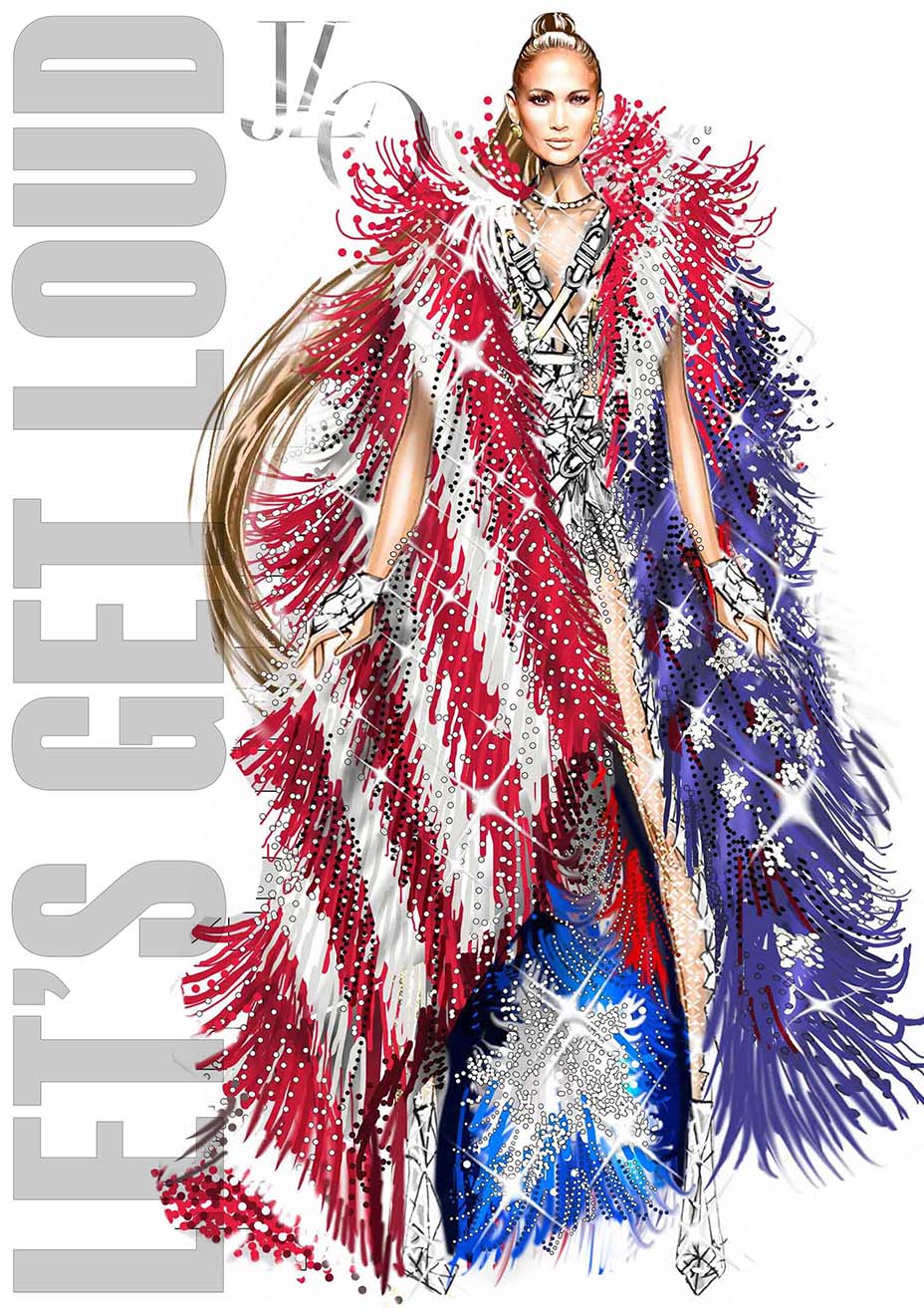 For the final look, Lopez turned to salsa and a celebration of both North and South America as the source of inspiration. “As a Puerto Rican-American, she very much wanted both countries and flags represented,” says Zangardi of the bejeweled, feathered cape in the style of the American flag on the exterior, with the inside modeled after the Puerto Rican flag, worn over a salsa bodysuit with metal mesh fringing threaded with crystals. 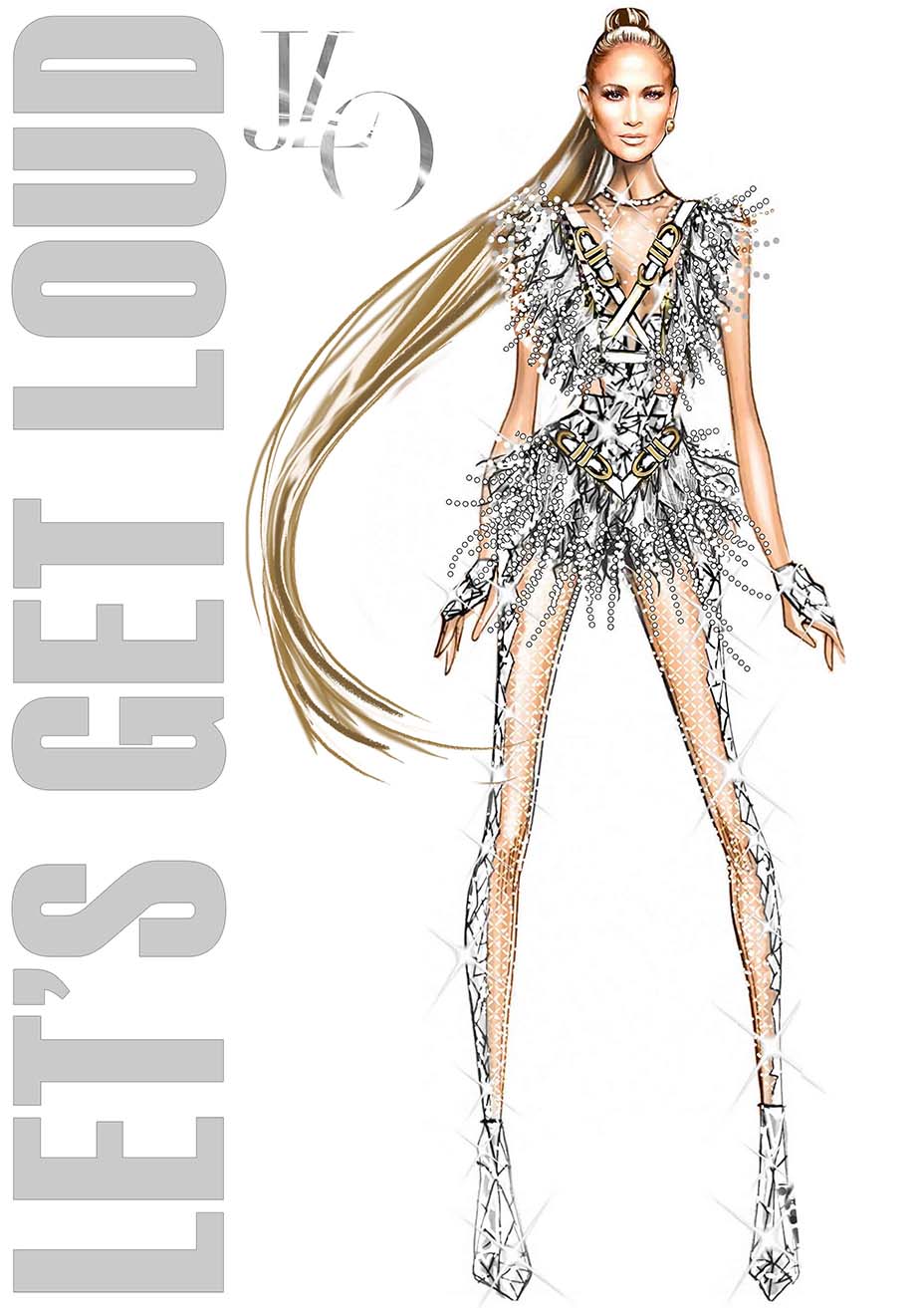 “The final segment is with Swing Latino, a salsa dance school from Colombia, whom she met and fell in love with on World of Dance and then brought on tour with her,” says Zangardi. “We added a fringed [tulle] dress on top of the bodysuit to really accentuate the moves of the choreography.” 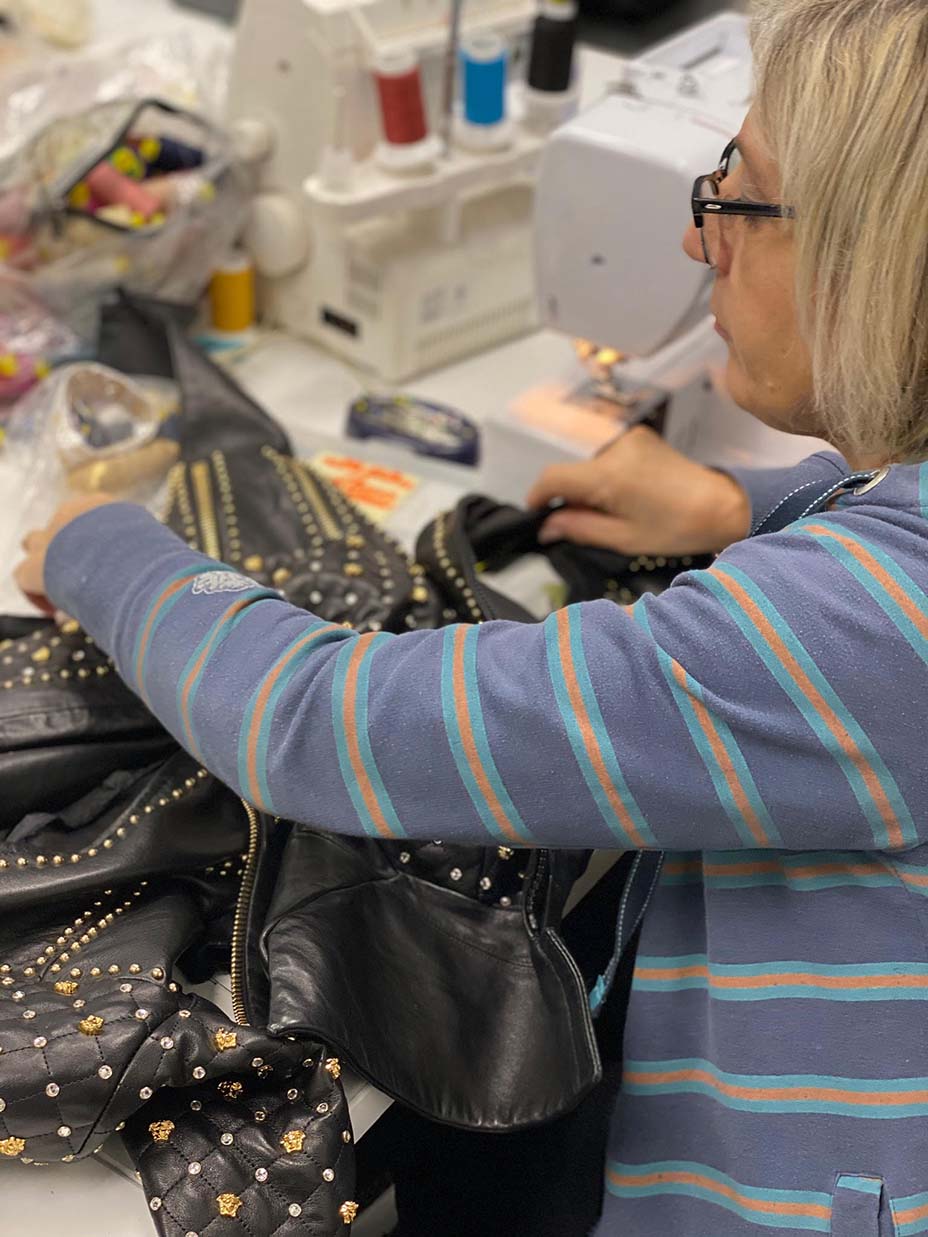 Because of the scale of the performance, the pair say logistics of the preparations have been staggering in their complexity. “It took 25 people over 50 hours to prepare the looks after the fittings and we’ve had 16 tailors speaking three different languages (Spanish, Italian and English) in the costume room,” says Zangardi. 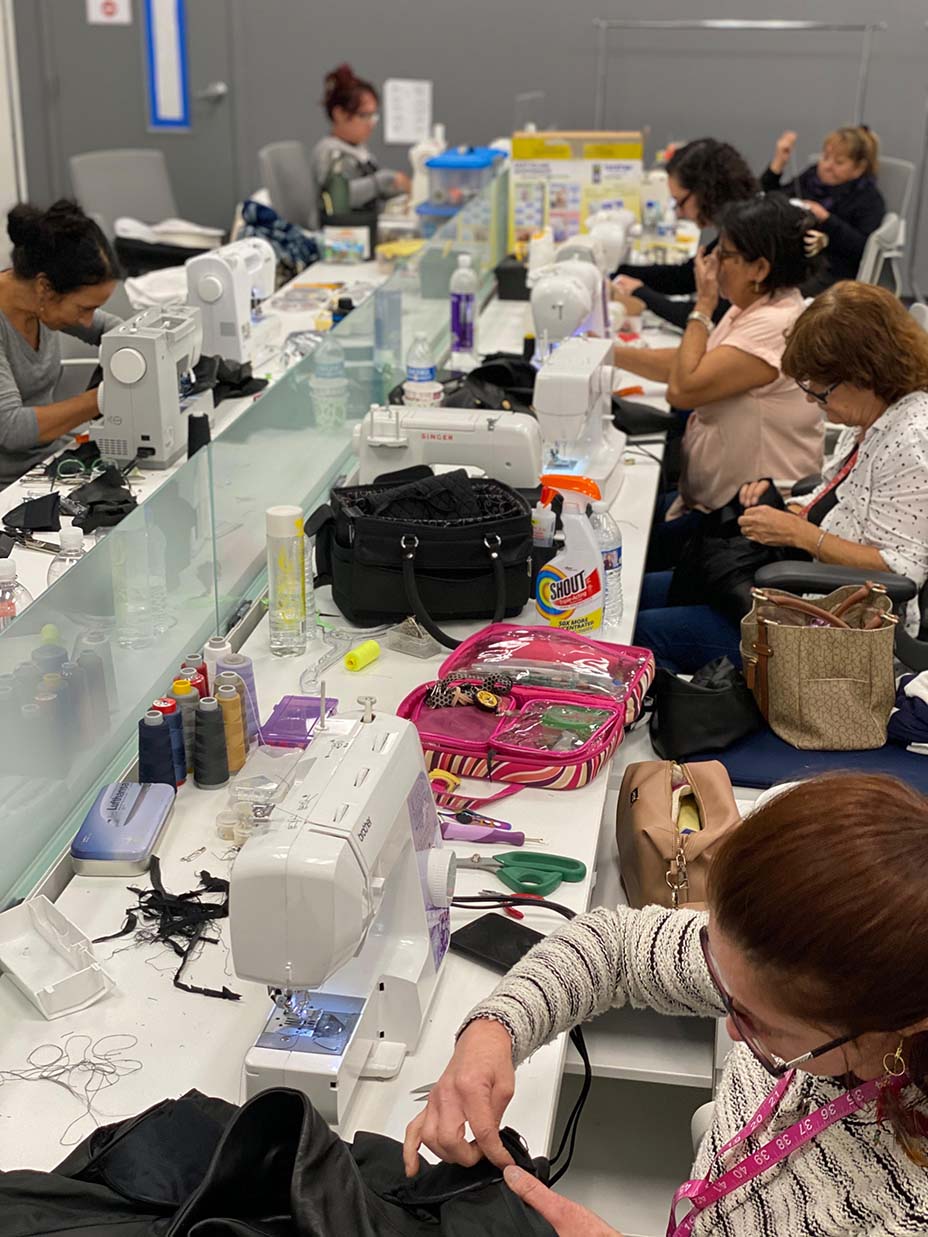 Changes, tweaks and alterations also had to be made to the costumes throughout the dress rehearsals on an ongoing basis. “We decided to cut the sleeves off of the motorcycle jacket on Thursday, because it made the quick changes faster and [we] replaced the panels on the side of the hips to allow for more movement,” he explains. “The performance is so energetic, with her sliding on the floor and being flipped around, that after every rehearsal, we’ve had to repair and remake costumes for both her and the dancers, wash them, and replace crystals every night.” 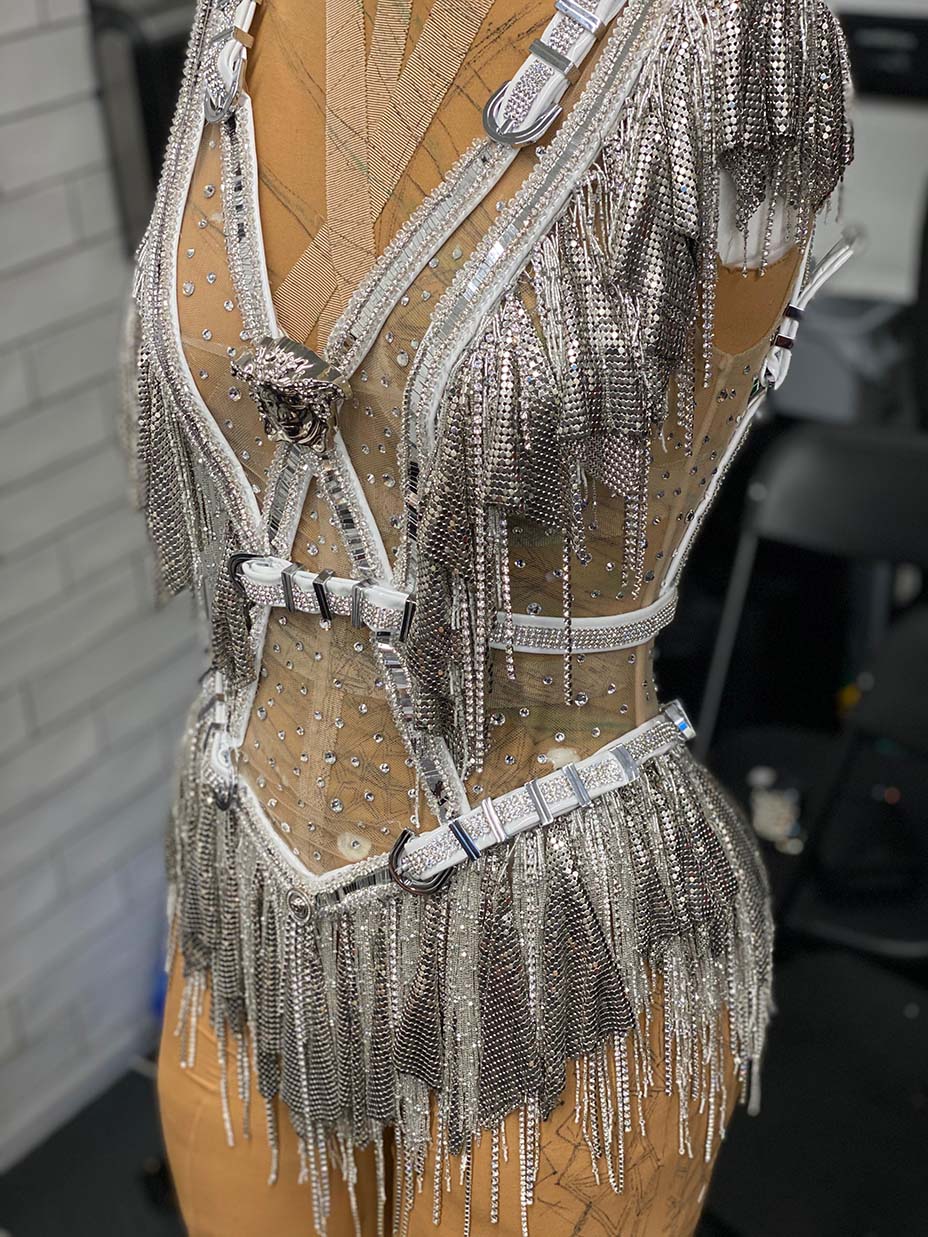 “Career-wise, this is one of the last things we wanted to check off our list,” says Haenn. Adds Zangardi: “It’s a major highlight for us. It’s been so awesome to be on that field, the energy is amazing; and having two Latin women on stage together also feels really iconic. It’s been so much work, but it’s been so fun.” 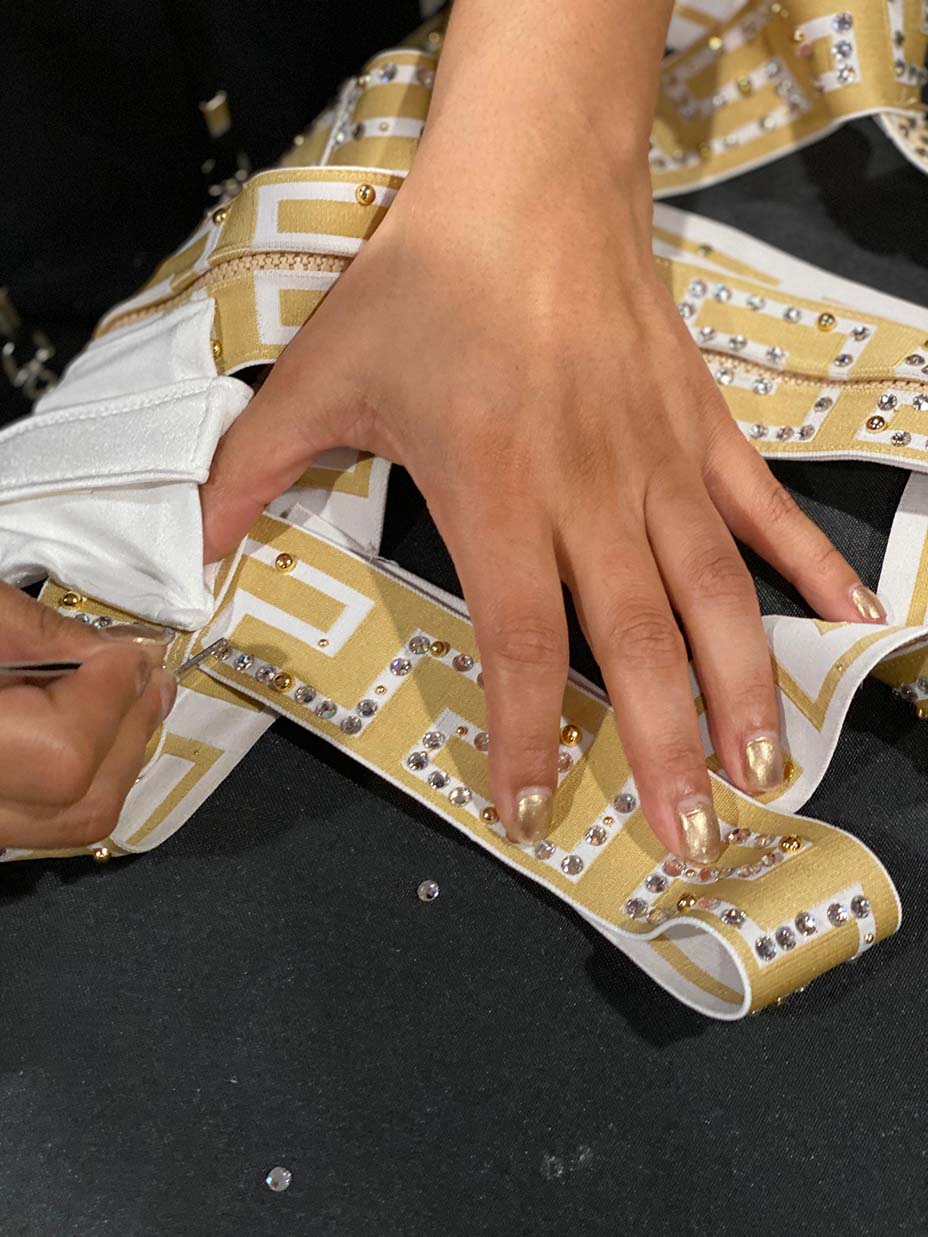