When designer Jeremy Scott moved his fledgling fashion label from Paris to L.A. in 2002, bidding au revoir to pal Karl Lagerfeld, who even then was saying he had the chops to one day take over Chanel, “people thought I was throwing away my career,” he recalls, adding that Vogue editor Anna Wintour’s reaction was particularly steely.

Fast forward 15 years, and Scott, 43, is having the last laugh. On Sept. 8, at New York Fashion Week, he’ll mark two decades of his namesake label (he’s also been creative director of Moschino since 2013) with a spring 2018 collection that pays homage to his journey from bullied farm kid in Kansas City, Missouri, to pop provocateur in Hollywood. (Along the way, he’s dressed Katy Perry, Rihanna, Miley Cyrus, Madonna and many more.) “He doesn’t take everything so seriously,” says Perry of Scott, whose designs play with cartoons, cowboys and other kitsch themes. 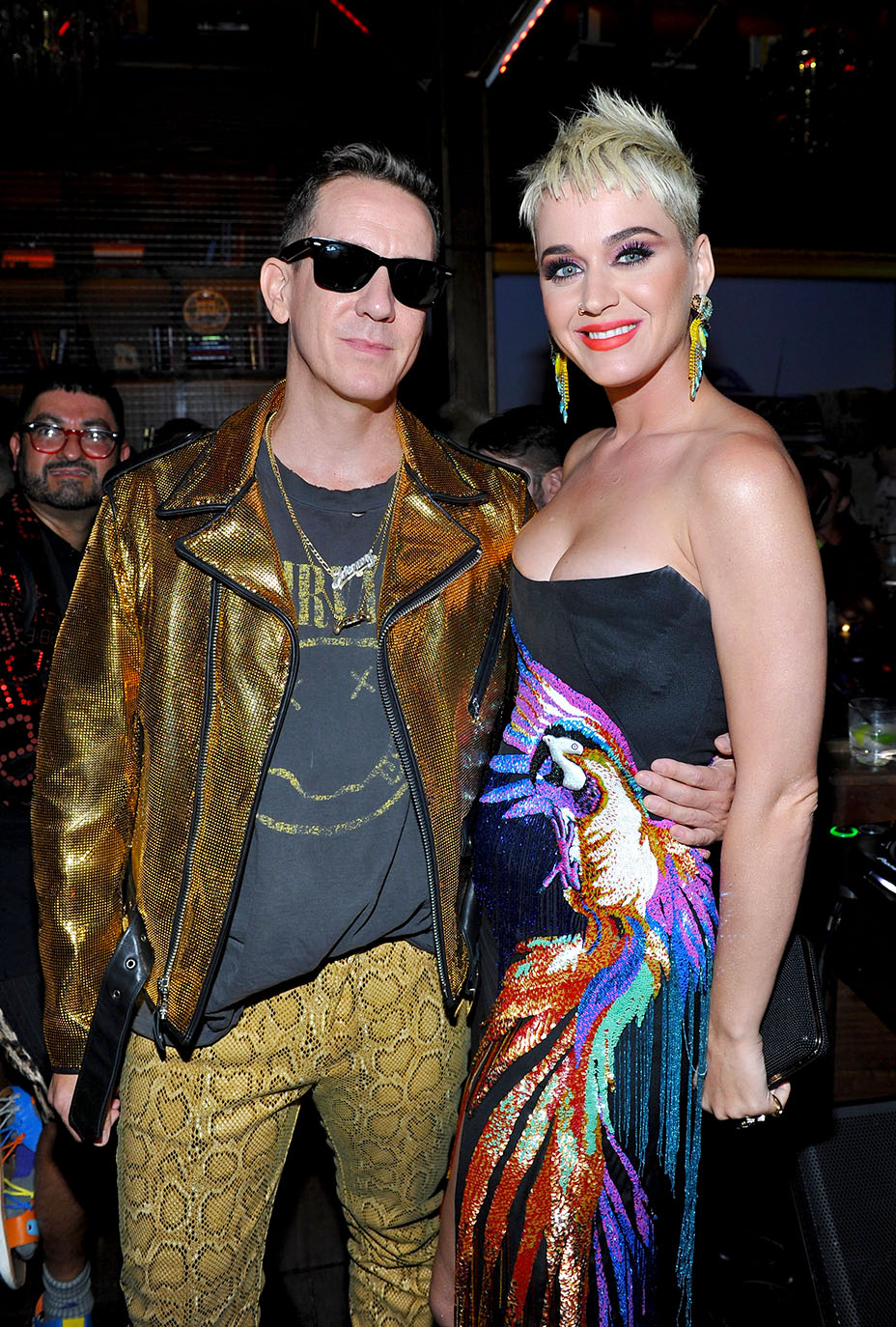 The new show will be a retrospective touching on his streetwear influences and includes a capsule of tees and other pieces with signature Jeremy Scott logos and sayings like “Keep Fashion Weird.”

“There’s been a huge shift culturally,” notes Scott, who has collaborated with numerous brands, including Adidas, Longchamp, UGG, Swatch and Magnum ice cream over the years. “But fashion has always been dominated in a global sense by Hollywood,” says Scott of his industry’s growing L.A. presence. (Tom Ford, who shows Sept. 6, recently moved his atelier from London to West Hollywood). “Even in the ‘80s, there was Montana and Mugler on the Paris runways, but there was Nolan Miller showing big shoulder pads on everyone’s TV every week on Dynasty.” 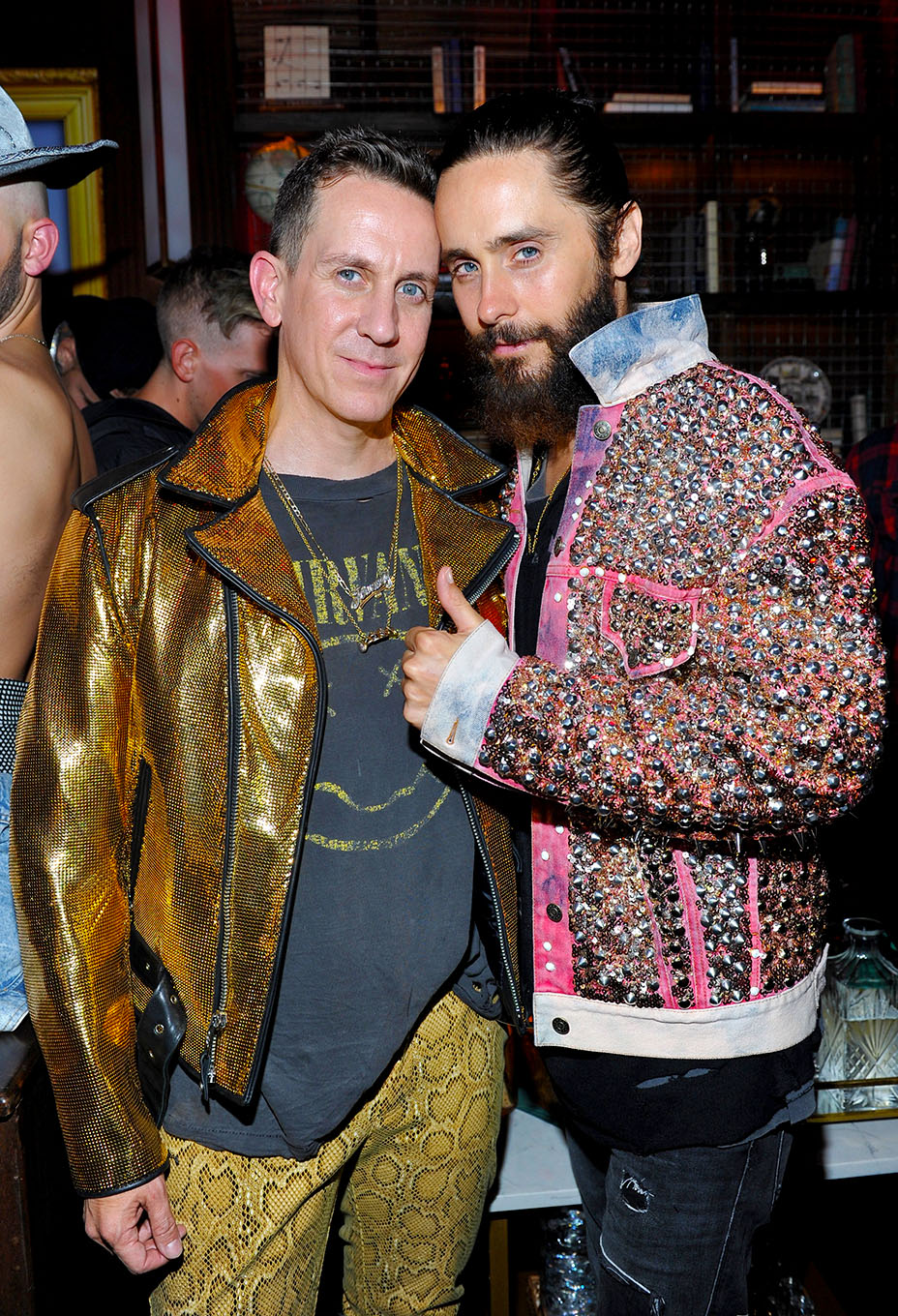 Scott, repped by WME-IMG, has ambitions to design costumes or direct a film. In addition to having a deep bench of Hollywood fans, Scott has long produced collections that revel in Hollywood themes, starting with a short film he directed to show his clothing collection in 2000, a spoof on Dynasty titled Starring, featuring China Chow, Lisa Marie, Amber Valetta and more.

“Bjork was the very first star I dressed and the very first concert I went to as a kid,” Scott says. “After my third fashion show, she called me and said, ‘I would love you to make something for my tour,’ and I ended up doing the costume she wore for her Homogenic tour. She was a great artist for me to start working with because she was so gentle; she was concerned with other creative people’s feelings,” Scott says, adding, “I learned that there’s a difference between a fashion show with a model and a performer who has to wear something and do a physically demanding job.”

At Jeremy Scott, Kylie Jenner Causes a Ruckus and Jesus Gets a Makeover

Perry has also been a longtime collaborator who started out as a fan. “I remember meeting her at the Paper Magazine 24-hour Store in L.A. in 2007, she introduced herself and said, ‘I’m a singer, you’re my favorite designer, I hope one day you’ll dress me.’”

Scott ended up dressing her for her “One of the Boys” CD release at the Capitol Records building in 2008. “She is that person who made that dream come true,” he says. “I reminded her of that at the 2015 Super Bowl halftime show when we were doing costumes for the biggest stage in the world.“ 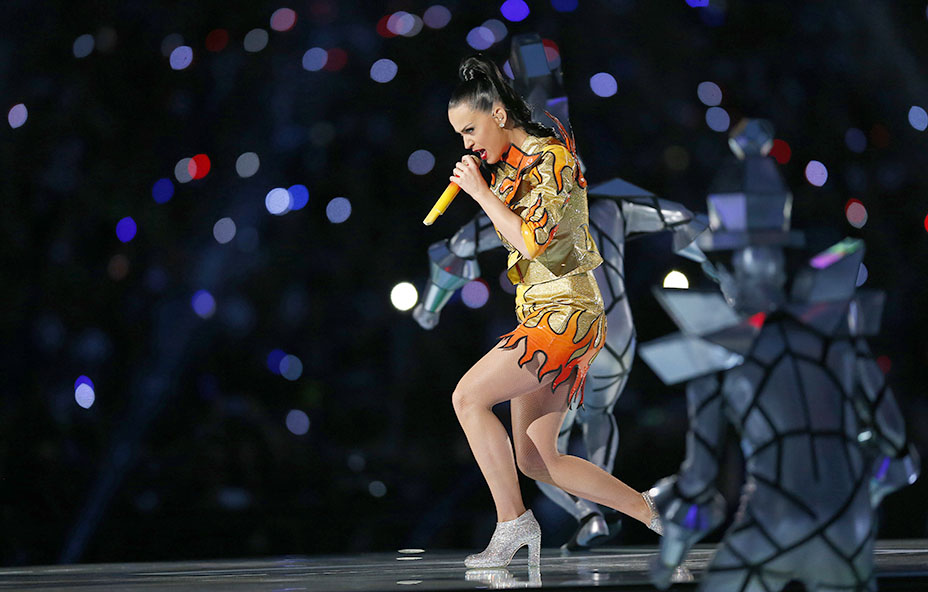 Still one of the most watched halftime shows of all time, Perry’s had four wardrobe changes, including a dress resembling a beach ball and a suit of hotrod flames. “It was a very pure expression of what she was doing, but also very me, especially the flame look,” Scott remembers. The experience was also the most nerve-wracking of his fashion life.

“I remember watching from the field, every time a costume change happened and nothing tore or was exposed and she kept moving, the pressure decreased. Finally after the finale, I was able to do my own dance on the football field.”

Scott met Miley Cyrus online. “She hit me up on Twitter and said, ‘Hey, this is my number, call me,’ and we became friends,” he says of their meet-cute more than five years ago. “She’s a rib out of my own chest, I adore her, I believe in her.” 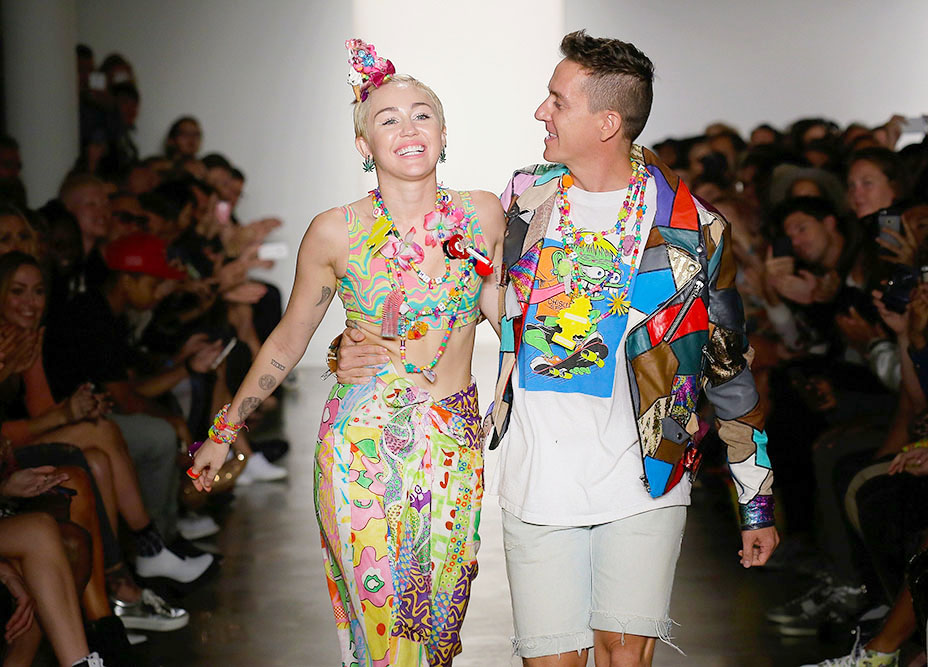 Cyrus made the colorful, craftsy jewelry for his Spring 2015 runway show, and sat front row. “I was at her house for 4th of July and she showed me things she was making for fun. It reminded me of what I was making for my show. So it was really organic,” he says.

Scott has also been a longtime pal of Madonna, taking her as his date twice to the Metropolitan Museum of Art Costume Institute Gala. “Madonna is someone who inspired me when I felt rejected, out of place, and not understood for being gay in high school,” he says. “I would think, ‘One day I’m going to be Madonna’s friend.’ She gave me that hope. I saw how she interacted with gay people and with creativity and fashion and it resonated with me and made me feel like I wasn’t wrong. Truth or Dare was oxygen to me because where I was, people weren’t giving me love. There wasn’t Glee on TV…I was physically or verbally accosted daily. It was not gleeful, I can promise you that.” 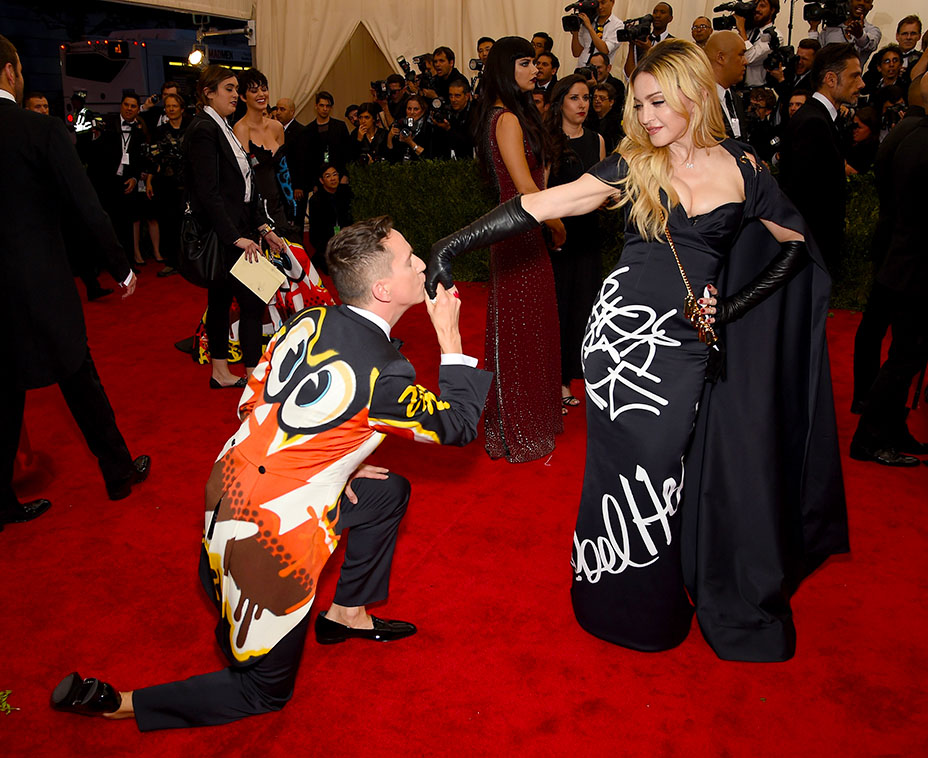 Today, Scott owns his business outright, and runs it without any outside investment. “It’s my name, I built it on my own back. No one else owns me or can tell me what to do,” he says. He recently moved into a new studio in Hollywood, taking over the beautiful art deco Film Exchange Building, which was once home to a film manufacturer. The secret to his financial survival, in part, has been working on dozens of collaborations with everything from car to condom brands, that have brought his name to new and different audiences. It all started with Adidas in 2002, right after he moved to Los Angeles. 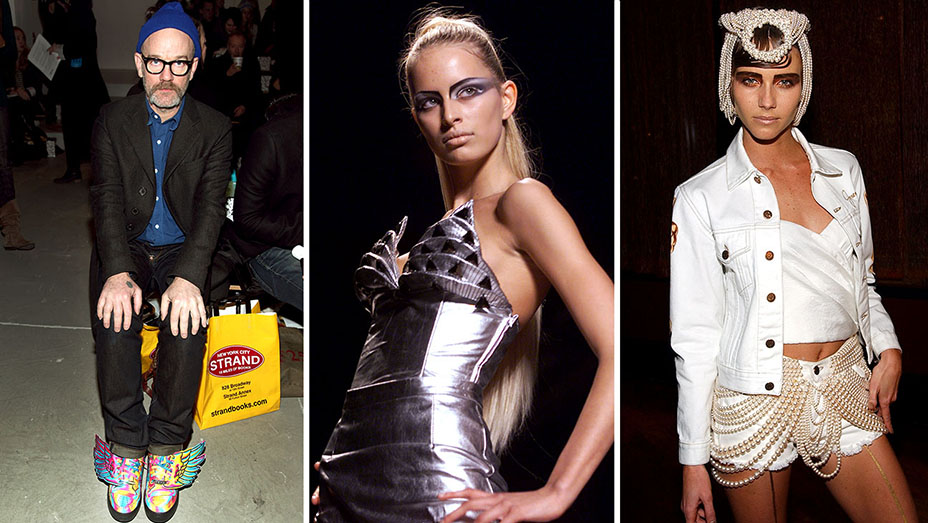 “When Adidas asked me to collaborate, I said I would do it if it was something ongoing, and I wanted to know they would go there and take my ideas to full effect,” he says, referring to the out-of-the-box designs he’s done for the brand, including shoes with wings and teddy bear heads. “It was great to offer my vision at a price point that was accessible and with global distribution,” he says. “And it proved a point I had always believed in; people aren’t afraid of fashion, they just need it to not cost three months’ rent, and not be so precious.”

When it comes to his own clothing collection, his low-brow vision—past designs have featured Spongebob Square Pants, Ren & Stimpy and Shrek—hasn’t always been lauded by critics, many of whom dismiss him as a cultural appropriator—or worse, a copycat. At the premiere for his documentary, Jeremy Scott: The People’s Designer, he was served with a copyright infringement lawsuit on his designs. He’s also been sued by two artists, one the graphic designer Jimbo Phillips, and the other the street artist Rime, for allegedly copying their work, and settled both suits out of court.

But the controversy hasn’t stopped Scott from being his Warholian self.

“I have been loved and touted, and I have been thrown away. And I’ve felt it all. I realize what I do isn’t everyone’s cup of tea, nor should it be. It’s a point of view, which is an old school fashion thing. People knew who the Saint Laurent girls were because they looked a certain way. It wasn’t murky which a lot of fashion has become. That’s why I always loved Rudi Gernreich and Peggy Moffatt. They were always so uniquely themselves,” he says of the 1960s era L.A. designer and his model muse. “I love individuality, I respect it in a designer. That’s the goal of a designer, to create a world that’s very identifiable.”

With his Adidas deal, Scott laid the groundwork for a lot of what’s going on in fashion today, with designers such as Raf Simons, Demna Gvasalia and Gosha Rubchinskiy referencing athletic and streetwear, and many more collaborating with athletic brands including Adidas, Nike and Puma. “What’s selling is casual—high-end luxury ideas in sportswear fabrics, and making things that were worn on the street and red carpet and stage by iconic performers. It’s a trickle-up effect,” Scott explains of his design philosophy. 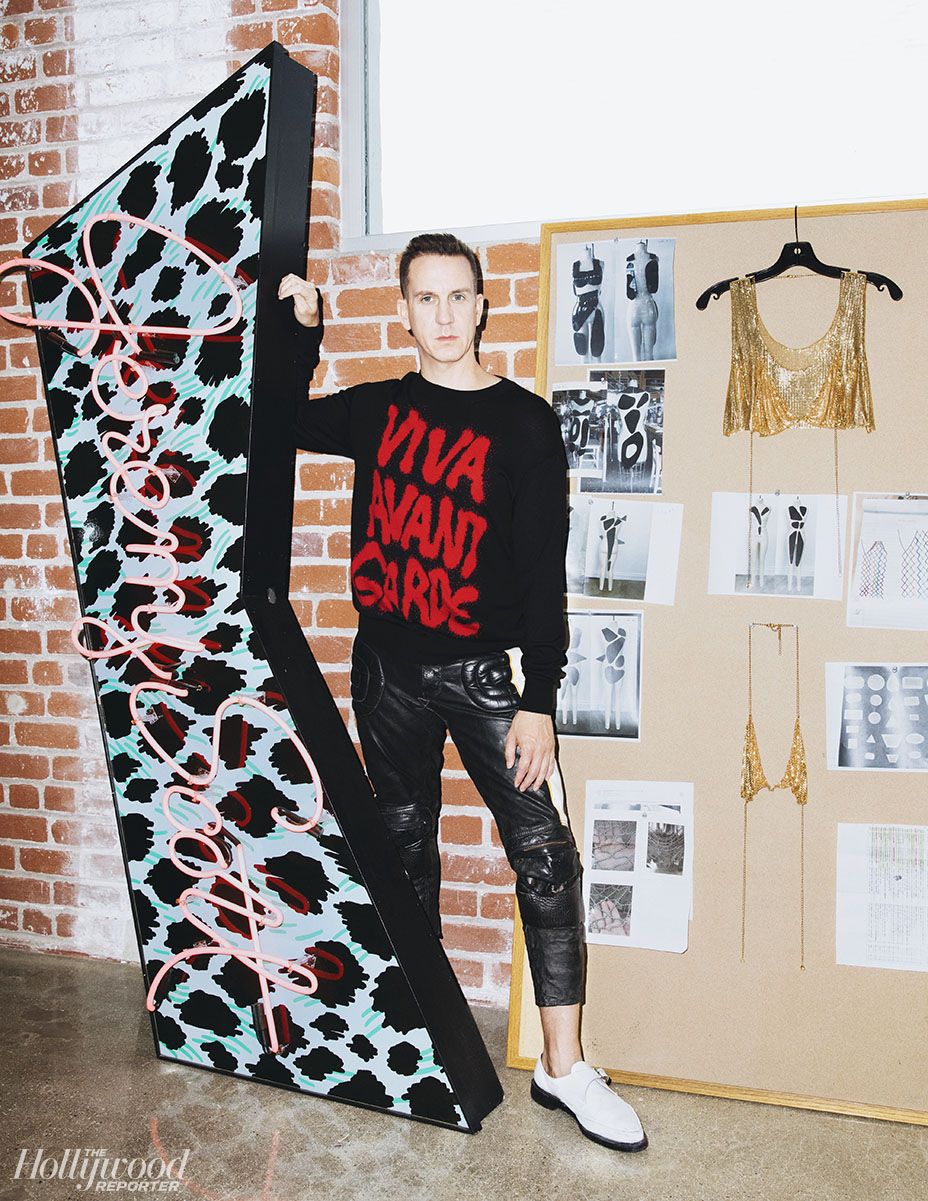 Over the years, he’s realized “how much of high fashion isn’t real,” in the sense that it is made for the runway or red carpet only. Instead, he says, “I try to continually make a range of things at varying accessibility points with potent, strong design, so it’s not just a dream.”

“We don’t need anything more, that’s part of why I try to make things that are unique, that you didn’t know you need until you see them. And I try to make packaging worth keeping,” he says.

His latest collaboration is with UGG, the marshmallowy surf booties of early aughts lore, which he has redesigned to be licked with flames and encrusted with crystals. “I secretly had an undercover UGG love,” he explains. “Somehow my assistant met the people who do their PR, and they said we’d love to do something.” The post-VMAs launch party for the collaboration drew all of Scott’s famous pals, including Perry, Paris Jackson, Jared Leto and Lil Yachty, making the association marketing gold for UGG. 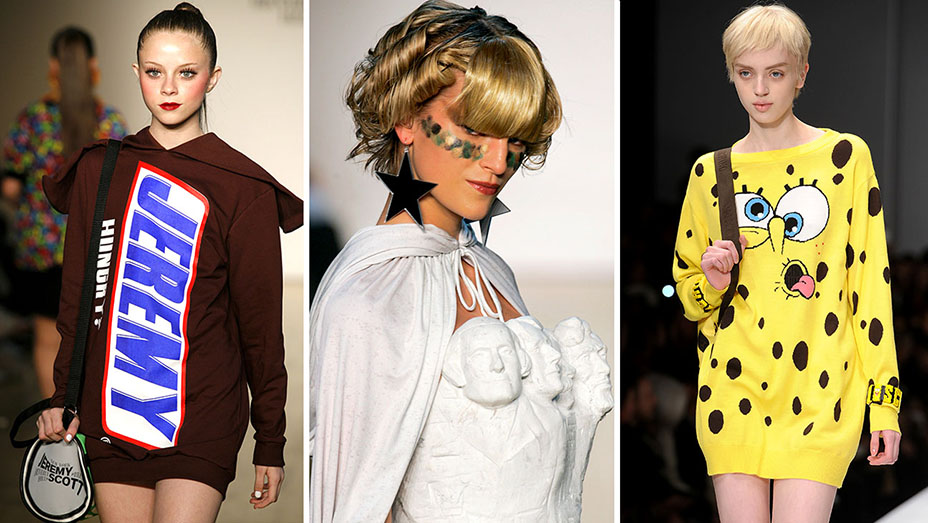 As creative director of Moschino since 2013, Scott splits his time between L.A. and Milan, and he’s enjoying the role, which he says has helped “reaffirm his original fashion cred, and given him a larger platform through ad campaigns to show the theatrical aspect of my designs.” But he can usually be found anywhere there’s a Hollywood spotlight. In April, he hosted his 10th annual Coachella party in Palm Springs, and made an appearance at the Cannes Film Festival to launch a short film for Magnum ice cream with Cara Delevingne. In June, he showed his Moschino Resort 2018 collection in L.A. to a star-studded crowd, and in August he launched his first beauty collaboration with Sephora.

As to whether or not he’d like to return to Paris one day, perhaps even as the designer for Chanel, Scott is matter of fact: “Any designer who tells you they don’t want to design Chanel is a liar…I look forward to Karl having a long career, and every last moment of fun on the runway. And then they can call me.”

“I don’t count anything out except L.A. is my home. No matter how many plane rides I have to take,” says Scott, who owns two historic John Lautner-designed homes—one in Hollywood and the other in Palm Springs. “Those are the houses I saw pictures of and wanted to move to L.A. and be part of when I was a farm boy in Kansas City!”

In 2016, he paid $7.7 million for the John Lautner-designed Elrod house in Palm Springs that was featured in 1971’s Diamonds Are Forever. “I remember seeing the Bond film as a kid,” he says. “Bambi and Thumper were these exotic, powerful, sexual women who were beating this man to a pulp — and now that’s my living room!”