Continue to The Hollywood Reporter SKIP AD
You will be redirected back to your article in seconds
Skip to main content
October 27, 2018 9:17am

Modern Family stars Jesse Tyler Ferguson and Sarah Hyland opened up about the big reveal of the character that dies on their show — and hinted that bigger news is on the way.

After co-creator Christopher Lloyd told Entertainment Weekly in September that a “significant character” would die in the 10th season, fans online were quick to speculate who, with many guessing Stella the dog.

“I heard it very early on and I didn’t think it was going to be such a big deal,” Ferguson told The Hollywood Reporter at the No Kid Hungry gala in Brentwood that he emceed on Friday. “I thought we would just handle it as it was another storyline. But it leaked … and then it became this media thing.”

Jesse Williams and Jesse Tyler Ferguson in 'Take Me Out': Theater Review

Ferguson said it would have been a simple storyline had not so many people been aware of it. “But I’m kind of glad that it had some commotion around it. It’s exciting for us.”

Ferguson was surprised to read online comments with people thinking the character was not significant enough. “We have very bloodthirsty fans. Also, I feel like the mother of two of the characters that we’ve grown to love is a pretty significant character. So really, the only drawback is I won’t get to work with Shelley Long in the near future.”

He added that he loved how the writers were able to “ride that fine edge of tragedy and comedy.”

Also a gala guest, Hyland agreed and called it a “beautiful episode” with a “tasteful” combination of funny and moving.

“There’s so many things I loved about that storyline,” she told THR. “I think especially the idea of a brother and sister having a very different relationship to the family member that has passed and being able to come to solid ground on how they feel.”

An upcoming episode focuses on “divvying up” things that DeDe has left the family and “how a person can still be in your life even after they’ve passed,” Hyland added.

However, Ferguson hinted that an even bigger storyline is on the horizon. “There’s a major thing happening this season. It’s beyond,” he told THR, only adding that “it’s big” and “I think you’ll be surprised.” Hyland confirmed this “bigger thing than the death” is coming, only saying that “it was a shock, that’s for sure” and “there’s a lot happening with Haley, but I can’t say.”

Since ABC will take ownership of the 20th Century Fox-produced show, it’s undecided whether Modern Family will end after season 10 or continue for a reduced or full 11th season, co-creator Steve Levitan told THR on Wednesday. He said it’s related to some hurdles with cast contracts and “making sure we have the right stories.”

Amid the discussions, Ferguson said, “We’ll never have jobs as good as this job. We love these characters so much. We love doing the show … If we can stick around and make this last a little longer, I think we’d all like that.”

Hyland said it seems that nobody wants Modern Family to end, and “it’s going to be hard to say goodbye.” She hopes by the finale, Haley grows up and learns responsibility. “I think it’s about five years past her time.” For Ferguson, he’d just like to see it end on “a strong note.” 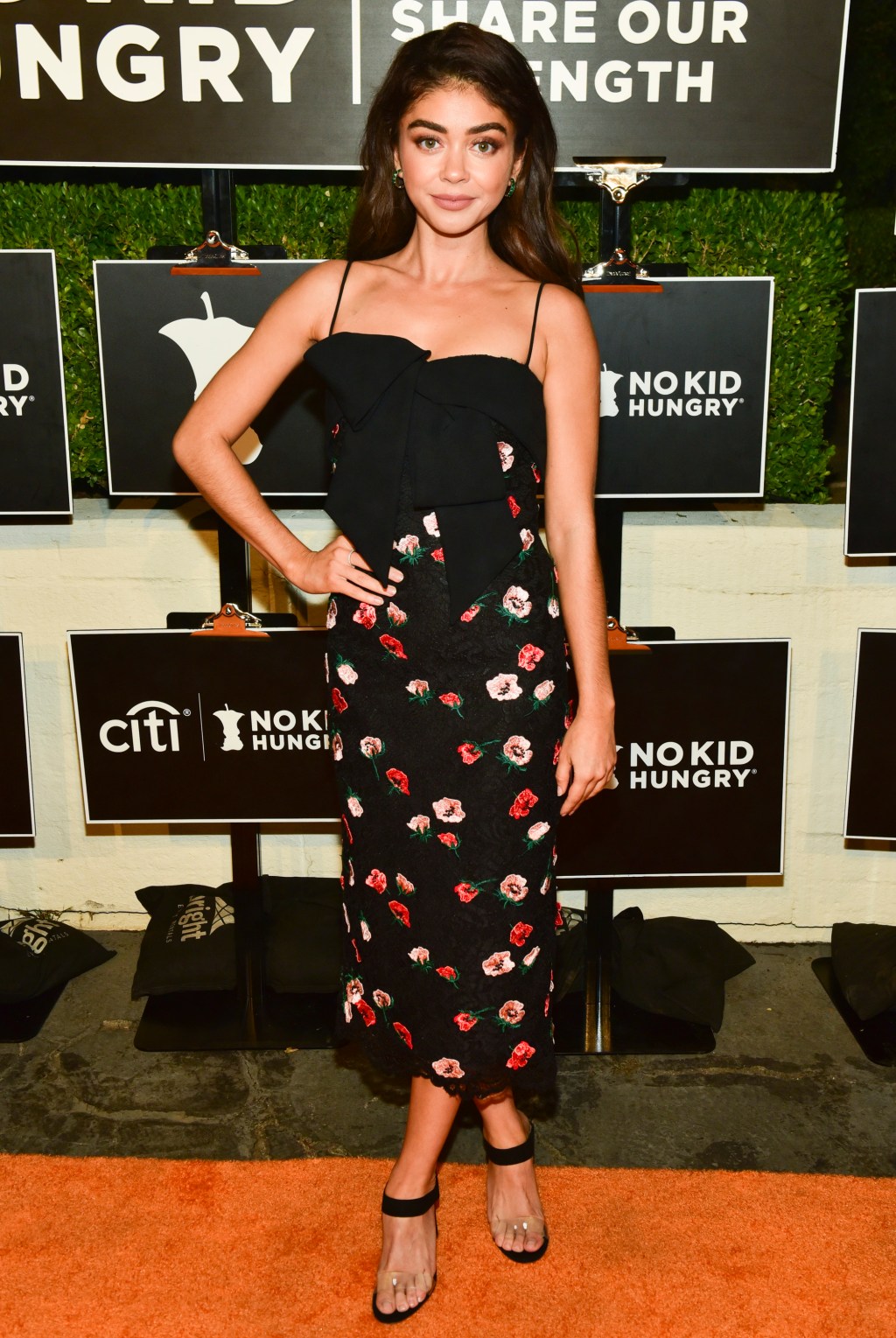 The two Modern Family actors joined Diane Keaton at the home of White House interior designer Michael Smith and his partner, U.S. Ambassador to Spain James Costos, at the No Kid Hungry fundraiser to honor art and culinary icons Kim and Michael McCarty.

Aiming to reduce the current 1 in 6 kids in America that don’t get enough to eat, No Kid Hungry treated 370 attendees to dinner and a live auction, raising $715,000. Sang Yoon of Father’s Office prepared a Vietnamese salad with quinoa, Brooke Williamson of Playa Provisions offered a crispy shrimp and carrot rice dish with octopus and Miles Thompson of Michael’s Santa Monica served a roasted pork collar with burnt cabbage. MasterChef’s Christina Tosi dished out her signature cereal milk ice cream in a dessert truck after opening her Milk Bar West Coast flagship on Melrose last month.

The event was co-chaired by Mary Sue Milliken, owner of Border Grill Restaurants, and Jeanne Newman, entertainment attorney to Lee Daniels, Amy Sherman-Palladino and Tracee Ellis Ross (and her husband is 20th Century Fox Television co-chairman Gary Newman). J.J. Abrams and Bette Midler were on the host committee as well.

Hyland became involved with No Kid Hungry “since its conception,” starting with the first intimate dinner party alongside Hailee Steinfeld, Katharine McPhee and Amanda Bynes.

“I’m so proud to have been a part of this organization for so long, and I’m really proud to be here tonight thinking back at that crazy little dinner that we had,” Hyland told THR. “Here we are eight years later.”