On a morning in late May in the basement of APL, Adam Perry Lang’s newly opened Hollywood chophouse, Jimmy Kimmel is about to get an informal cooking lesson.

The ABC late-night host and chef have created meals together many times, including television segments, holidays and charity events over the past decade. But Kimmel has never before helped Perry Lang saw through a 60-pound, dry-aged bone-in ribeye cut in the “environmental chamber.” That’s what the restaurateur calls the meat cave (the prototype was used by Ford Motor Co. to subject test cars to extreme temperatures), which holds 18,000 pounds of beef.

“This is all cow, there are no muskrats or anything like that here?” queries Kimmel, before Perry Lang, 48, whom the comic refers to as “meat maestro,” fires up the saw to carve 3-inch slices off the formidable slab. “This is either the most beautiful thing you’ve ever seen or the most horrific,” jokes the 50-year-old host. Get ready, warns Perry Lang, “you’ll do some butchering.” Kimmel fires back, “Good, good. It’ll be good for me to butcher something other than my own show.”

The two are at ease prepping and talking meat as they marinate the 2-pound, platter-sized ribeyes (“It might be for a family of Smiths,” says the comic, but “it’s one [serving] for Jimmy Kimmel”) and the host toggles between his trademark dry banter (on the herb brush applying rosemary and thyme: “We got Elon Musk coming up with a better way”) and foodie questions. Jimmy Kimmel Live! comic Guillermo Rodriguez even shows up with a napkin tucked under his chin.

Kimmel is an apt pupil, according to the chef — who is also the author of several barbecue cookbooks, including the best-selling Serious Barbecue. Kimmel says his copy is used so much, it’s covered in marinade. His favorite Perry Lang takeaway is something called board dressing. “You get a cutting board, and you put olive oil on it and salt, and herbs, and then you dredge the meat in the board dressing, as Adam calls it,” says Kimmel, adding that it’s great for finishing grilled steaks. 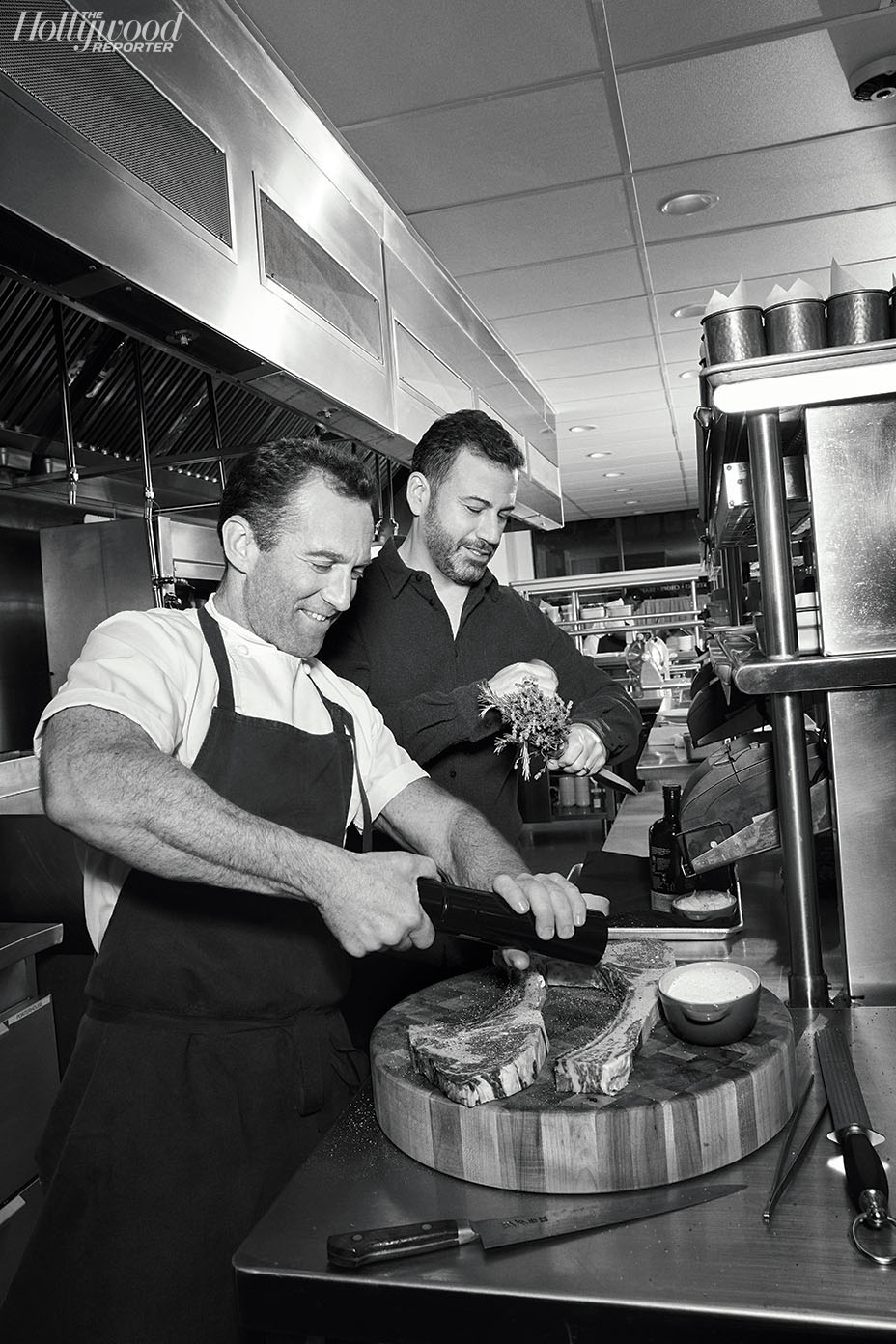 Perry Lang observes that cooking with Kimmel is serious business: “He really takes the details down, so we’re writing down what we’re doing and cooking — he’s really into menu planning, organizing it and documenting it.” When asked, conversely, what Perry Lang might have picked up from Kimmel, the latter deadpans: “chlamydia,” but then, more earnestly, launches into his favorite way to consume carnivorously. “What I like to do is to take some of this beef rib, which is unbelievable, and mix it. I like to mix beefs. Is it beefs, or beeves?” Perry Lang replies that he’s never done that before. Says Kimmel: “See, he teaches me how to cook, I teach him how to eat.”

Kimmel and the grilling guru — who attended Culinary Institute of America and worked his way through such New York kitchens as Le Cirque and Daniel before turning to barbecue — first appeared in a cooking segment on Jimmy Kimmel Live! in 2007, when he roasted a whole pig and fed the show’s staff in the parking lot behind their Hollywood Boulevard studio. “No grill, just charcoal on the blacktop. It was crazy good. The skin was crisp and delicious,” recalls Kimmel. “I mean, how can you not fall in love with that?”

It has been one long meat-loving bromance ever since, with both simply enjoying cooking, eating and feeding people, whether on the show or off. Their grandparents even grew up less than a mile apart in Brooklyn.

Several years after the roasted pig, Perry Lang smoked a massive 80-pound “steamship round” on the show, slathered it with mustard and spices and fed beef sliders to Hollywood High School teachers next door to the studio. Kimmel “wants to support the neighborhood,” says Perry Lang. “It’s what I’m trying to do with APL, too.” In 2013 and 2015, Perry Lang also hosted a series of barbecue pop-ups that were open to the public in the show’s backlot, where the smoked brisket, pickles and Texas toast sold out daily during lunch. Proceeds were donated to local charities like L.A. Kitchen. 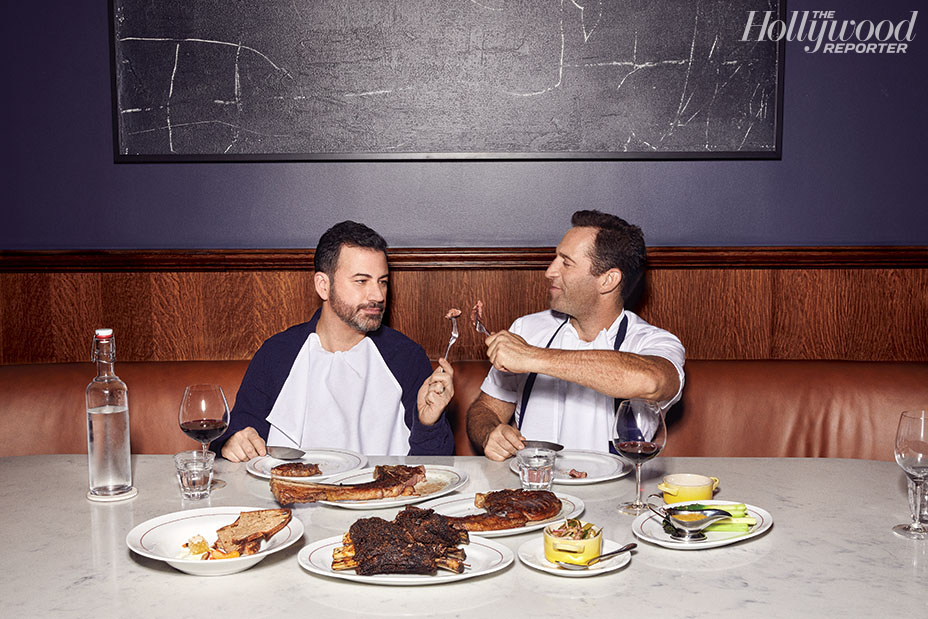 Now, the two cook an annual Thanksgiving dinner for the Live! staff, and for the past eight years, they have prepared an entire Christmas Eve meal for friends and family. About the latter, Perry Lang, who lives in Manhattan Beach, says, “We started with a traditional Italian seafood feast of seven fishes, but now it’s 21 fishes.” He explains: “I typically get a ceremonial fish flown in from Italy, or France, or something local — something really special. So at the end of the meal, we have something truly grand and special.” (The duo also travel together, from Spain to Paris, to fly fishing trips in Idaho and Montana with “the boys,” a posse that includes fellow chefs like Chris Bianco, who will open an offshoot of his famed Phoenix-based Pizzeria Bianco in downtown Los Angeles this year.)

Off-camera, when they cook for their families in one of their homes (Kimmel lives in L.A. with wife and co-head writer Molly McNearney and their two young children), the duties are equally split. If Perry Lang does the cooking, Kimmel helps with prep. He makes one of the best burgers, Perry Lang offers. According to Kimmel, his backyard kitchen includes everything: a Viking gas grill, a Kalamazoo hybrid grill, a huge Ole Hickory Pit Smoker, a Caja China roasting box, a tandoor oven and a gas grill from American Cooking Equipment, a South Bay company that makes rust-resistant grills from marine-grade steel. “I also have a Renato wood-fired oven,” adds Kimmel. “I am a lunatic, I know.”

These days, you’re likely to see Perry Lang at APL, which anchors a corner of Hollywood and Vine less than a mile from the Jimmy Kimmel Live! studio. With its high ceilings and art deco-inspired mirrored columns, deep leather booths, swank bar, high-end art collection and custom-made knives — forged by Perry Lang himself in a friend’s studio in Murrieta, California; you’ll be charged $950 if you steal one — the steakhouse, a temple to throwback chophouses of the chef’s youth, debuted in May. Dry-aged steaks, that short rib and chops meet their complements in iceberg wedge salads, French onion soup and steamed asparagus with hollandaise sauce; plans are underway for a takeout window on Vine Street to serve up more casual things like brisket sandwiches daily.

For the opening fete that felt more like a premiere afterparty than a restaurant launch, the late-night host worked the room like he owned the place (he wouldn’t confirm if he actually does invest), greeting such fellow food fans as Jake Gyllenhaal, Los Angeles Mayor Eric Garcetti, Billy Crystal and Adam Carolla. Says Kimmel with a satisfied laugh, “I like to think of myself as the maitre d’.” 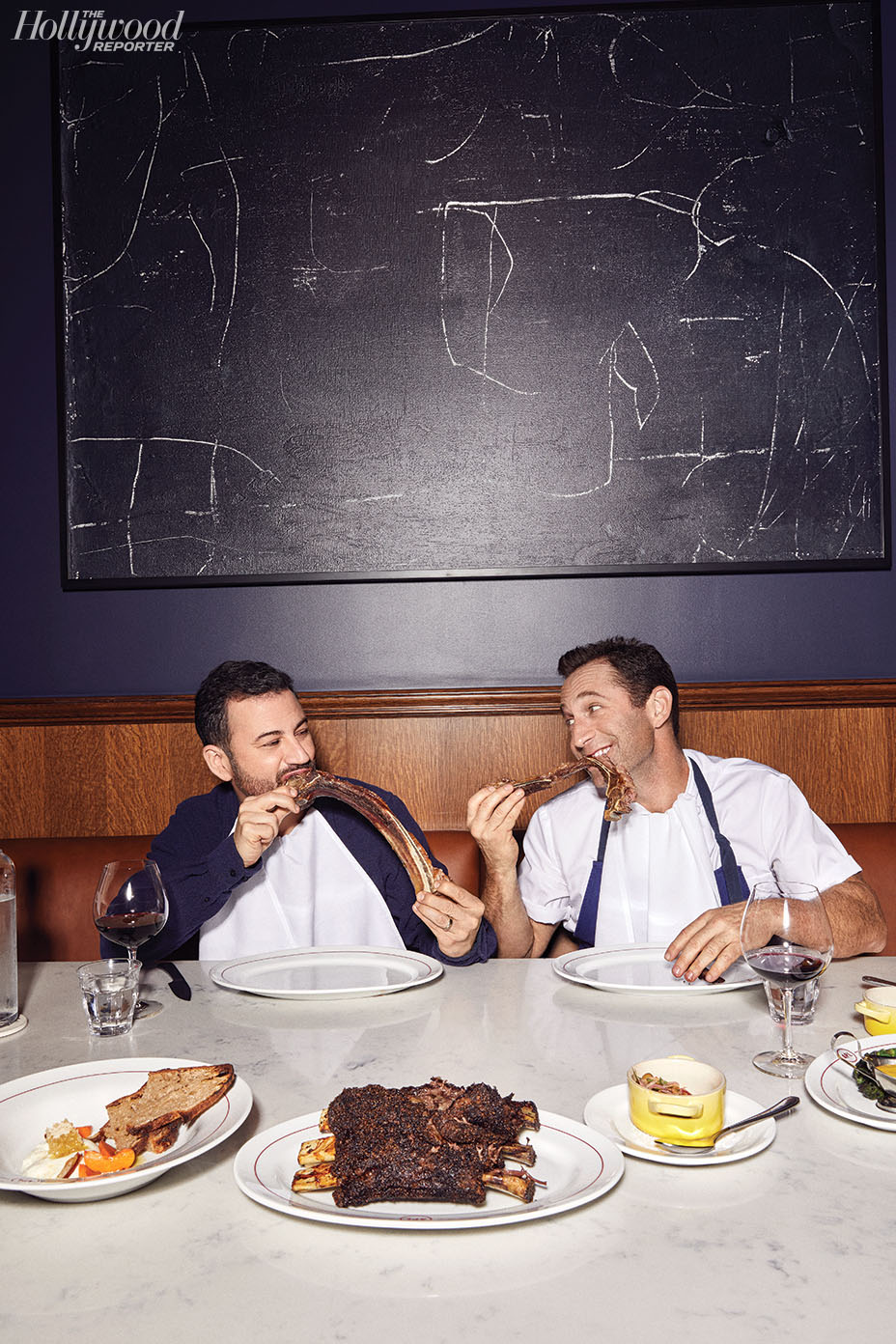 1. Work ahead of time: “I smoke chicken wings in advance, then finish and crisp them on a very hot grill just before serving.”

2. Remember that grill starters are battery-operated: “When it stops sparking, twist it off and replace the battery.”

3. Leave grill on high for 30 minutes after cooking: “Once the debris turns to ash, clean it easily with a wire brush.”

1. Trust your favorite local butcher: “Instead of demanding something trendy, ask them what they recommend.”

2. Check out overlooked cuts: Flap meat “is the same muscle structure as short rib but one-fifth the price.”

3. Season the meats well with salt and pepper, a spice rub or a marinade like sesame oil, soy sauce and chili paste.