Is there a more accomplished living interpreter of the plays of August Wilson than Ruben Santiago-Hudson? As both actor and director, his deep connection to the dramatist’s work has gone from strength to strength in recent years, consolidated further in this gorgeous production for Manhattan Theatre Club of Jitney, the last of Wilson’s 10-part chronicle of African-American experience in the 20th century to be staged on Broadway. With the broader exposure to the late playwright’s unique voice currently being garnered by Denzel Washington’s film of Fences, the timing feels ideal to revisit his inimitably pulsating world — simultaneously mythic and grounded in everyday grit, sorrow and joy — with a peerless company of actors.

Set in 1977 and first produced in its earliest version in 1982, Jitney was the work that launched Wilson’s landmark Century Cycle, a project of unparalleled ambition, covering 10 plays, each unfolding in a different decade in Pittsburgh’s Hill District. That epic combined work is distinguished by the depth and individualization of its characters, by the balance of heightened lyricism and earthbound naturalism in its musical language and by its stirring sense of history, each of the plays anchored in a specific present while glancing back at a painful past and ahead toward an uneasy future. The relative underexposure of the works outside the U.S. is perhaps the chief reason that Wilson, who died in 2005, was overlooked in his lifetime for the Nobel Prize in Literature.

In terms of dramatic incident, not a lot happens in Jitney, and yet, as mirrored in David Gallo’s meticulously aged set, with its wealth of scuffed details, there’s a sense of quiet enormity to the lives being explored onstage, both in their individual situations and their shared experiences.

That set is the run-down office of a Pittsburgh gypsy-cab company. Its motley crew of drivers, management and other habitués drift in and out with expertly choreographed naturalness in a play that shuffles seemingly inconsequential banter with arias both weighty and wistful, and interludes of tender feeling and searing pathos — all of it shaped with imperceptible skill into a hypnotic blues symphony.

The company is run by Becker (John Douglas Thompson), a hard-working, thoroughly decent man who serves as a deacon at his church and insists on reminding his drivers that the service they provide requires standards. Becker also is dealing with the city’s approaching date to board up the condemned premises as part of its urban renewal project.

On the low-maintenance end of the employee spectrum is Doub (Keith Randolph Smith), a bachelor who stays out of trouble by avoiding the volatile topics of money or women (“If you see me talking to a woman, you can bet it’s my sister or my aunt”). His veteran colleague Fielding (Anthony Chisholm) is more of a handful, regularly looking for a loan of a few dollars and habitually breaking Becker’s no-drinking rule, with quarter-bottles of whiskey stuffed down the back of the office’s ratty sofa. Also among the older drivers is Turnbo (Michael Potts), who repeatedly maintains, “I just try to live and let live,” and yet is forever meddling in everyone else’s business. 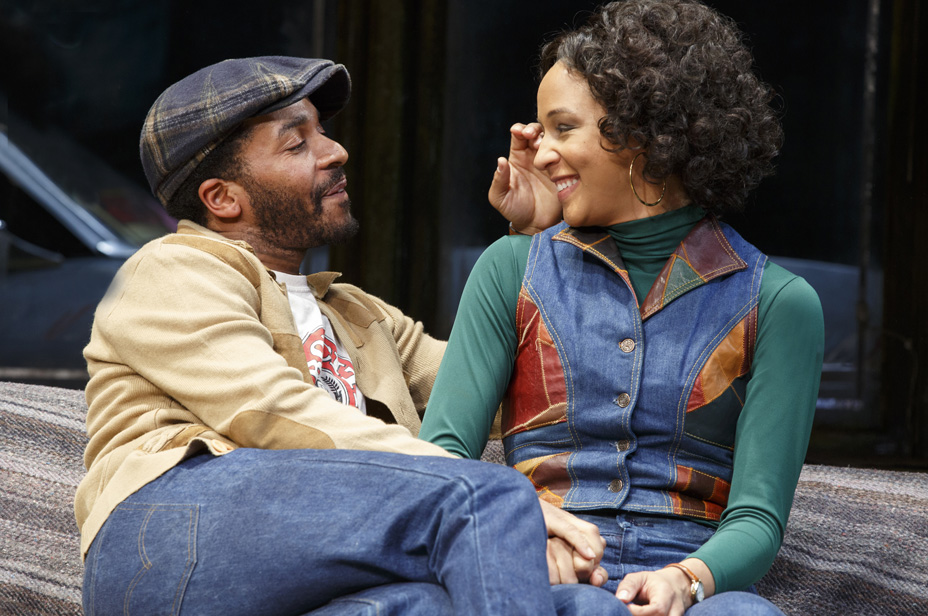 One of the themes of this and other Wilson plays like Fences is the older generation’s preaching of responsibility to younger men whom they perceive as being without values, while the young express impatience with their elders’ failure to challenge white entitlement. Turnbo’s relentless needling of Youngblood (Andre Holland), in particular, creates friction between the two that explodes at times into heated clashes. A Vietnam vet, Youngblood is taking advantage of the G.I. Bill to buy a home in which to build a future with his high-school sweetheart Rena (Carra Patterson) and their 2-year-old son. But his determination to keep that plan a secret creates complications.

The other semi-regular presences are occasional customer Philmore (Ray Anthony Thomas), whose carousing gets him kicked out by his wife, forcing him to move back in with his mother; and Shealy (Harvy Blanks), a super-fly, flamboyantly talkative bookie, who swings by to take numbers, wearing an array of fabulous pimp suits. (Costumer Toni-Leslie James takes her cue from Wilson’s fine-grained character portraits, with wardrobe choices that reflect who they are without overdoing the ‘70s kitsch factor.)

Santiago-Hudson punctuates the scenes with phat, funky grooves (by Bill Sims Jr.) that turn more somber as the dramatic stakes are raised. It takes considerable skill to conduct the musical movements of Wilson’s dialogue with the fluidity achieved here. Whether it’s a dispute over the comparative attractiveness of Lena Horne vs. Sarah Vaughan, or the contrasting takeaways from their time in the Armed Forces of Youngblood and Korean War vet Doub, the language itself represents its own form of fully fleshed-out drama. Even vignettes, like Fielding recounting a dream in which he ascended a golden ladder to heaven where only his estranged wife extended a hand to prevent him from tumbling back down, have an essential place in this exquisitely modulated tapestry.

Among the play’s more poignant scenes is the reckoning between Youngblood and Rena, the latter convinced his frequent absences from home mean he’s straying outside the relationship. With a handful of exceptions, like Aunt Ester in Gem of the Ocean, with her powerful spiritual connection to ancestors on slave boats from Africa; or Rose in Fences, who demands that her sacrifices be recognized alongside those of her husband, Wilson’s women are generally less developed than his men. But Rena’s unexpected response to Youngblood’s big surprise here is both hilarious and touching, their efforts to understand one another played with real heart by Patterson and Holland, the latter fresh off his soulful work in Moonlight.

The dramatic foundation that gives Jitney its swelling sense of gravity, however, is the troubled reunion of Becker with his son Booster (Brandon J. Dirden), newly released from a 20-year prison stint for the murder of a white girl who falsely accused him of rape. The confrontation between these two strong-willed men — one convinced his son threw away his life, killing his mother with grief; the other believing he seized the pride that the father he idolized had surrendered — provides a resonant conclusion to Act 1. And Wilson echoes those notes with the shattering developments of Act 2, during which the bitter chasm between father and son dissolves in Booster’s acknowledgment: “He ain’t got out of life what he put in.”

There’s not an actor on the stage who doesn’t thoroughly inhabit his or her flavorful character, from their singular speech patterns to their own particular walk or physicality. All of them deserve the highest praise. To mention just a few, Blanks is a riot as flashy Shealy; Potts makes Turnbo as funny as he is maddening; and the wonderful Chisholm, with his squeaky croak of a voice, signals that sly old geezer Fielding is by no means blind to his failings. But it’s Thompson and Dirden who occupy the play’s tremendously moving center. Both of them grasp the clashing forces of love and anger to devastating effect as they hit a wall of intransigence and incomprehension.

Since the passing of Wilson’s longtime directing collaborator Lloyd Richards in 2006, Santiago-Hudson has taken impressive steps to continue the legacy. It was hard to imagine him equaling the achievement of his thrilling 2012 production of The Piano Lesson. But perhaps partly because Jitney is a less mighty entry in the playwright’s canon, the result here feels just as revelatory. It seems both momentous and fitting that this fine production opens on the final day in office of the nation’s first African-American president, its eloquent portrayal of black struggle reaffirming Wilson’s place among the towering greats of American drama.