The entertainment industry’s push for a more sustainable awards season has made its way to the Oscars red carpet.

After several events switched to all-vegan meals — including the Golden Globes, Critics’ Choice and SAG Awards — the BAFTAs actually requested that stars re-wear old red carpet gowns or rent outfits to be more eco-friendly. Not everyone got the memo, but Kate Middleton did, re-wearing an Alexander McQueen from 2012.

This weekend at the Oscars, Joaquin Phoenix continued to show his environmentalism by once again re-wearing the Stella McCartney suit he’s been wearing all season long. The custom one-button black tux includes a grosgrain shawl lapel and black bow tie for the Oscars.

After the Globes, McCartney praised the Joker best actor Oscar nominee on Twitter. “This man is a winner…wearing custom Stella because he chooses to make choices for the future of the planet. He has also chosen to wear this same Tux for the entire award season to reduce waste. I am proud to join forces with you,” she wrote. 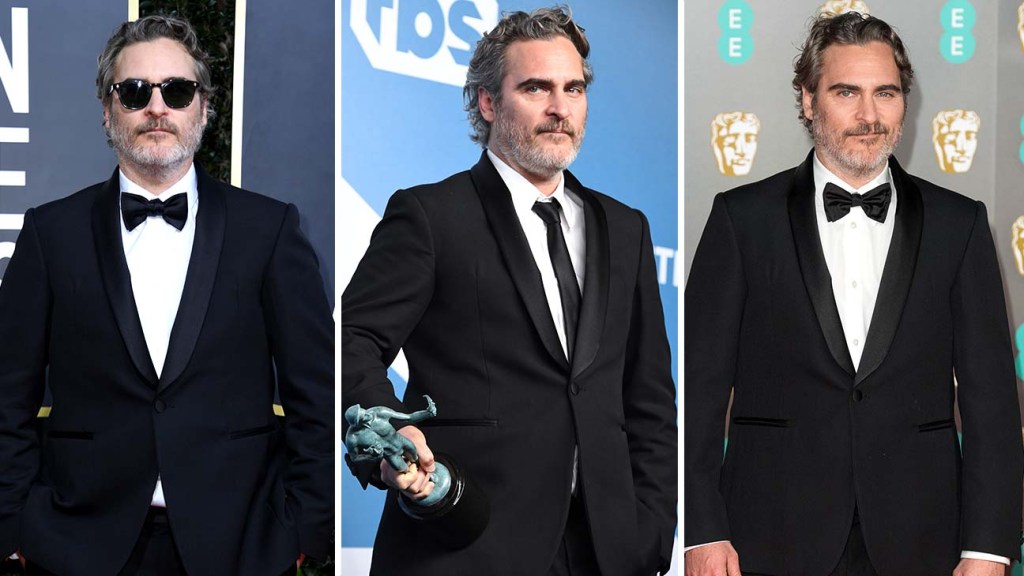 Bombshell actress Margot Robbie followed his lead by wearing 1994 vintage Chanel Haute Couture instead of having a new dress designed. And the Oscars’ best picture presenter, Jane Fonda, made good on her promise to not buy any new clothing. She recycled an Elie Saab gown that she wore in Cannes in 2014 and opted for sustainable gemstones, too. The Grace and Frankie star wrote on Twitter, “At Oscars wearing Pomellato jewelry because it only uses responsible, ethically harvested gold and sustainable diamonds.” 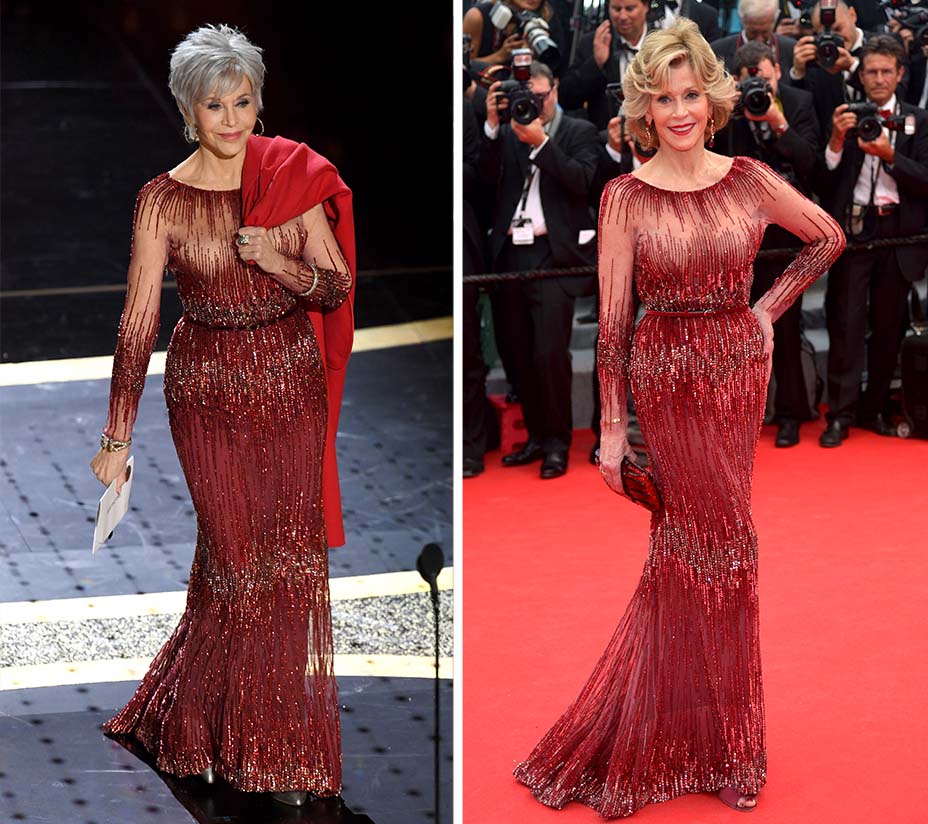 Three attendees were dressed through the Red Carpet Green Dress initiative in collaboration with Tencel Luxe. The campaign was created by Suzy Amis Cameron during the press tour for husband James Cameron’s Avatar in 2009. First up was Booksmart star Kaitlyn Dever, making a sustainable fashion statement at the Oscars in a custom-made ethical gown by Louis Vuitton, featuring eco-responsible silk satin that was embroidered with Swarovski crystals and beads.

No Time to Die actress Léa Seydoux likewise was in an eco-friendly custom black-and-white Louis Vuitton gown and organic satin sandals. The dress included organic silk faille and a type of filament yarn made from Tencel Luxe, which calls itself “the new player of eco-couture fabrics.” Seydoux added bling courtesy of Chopard: 12.82 carats of pear-shaped diamond earrings and a Haute Joaillerie Collection ring starring a round, 5.65 carat sparkler.

Elena Andreicheva, who won the Oscar for the documentary short Learning to Skateboard in a Warzone (If You’re a Girl), donned a gray eco-conscious, bespoke gown by Swiss designer Laura Basci, who often meshes sustainability and luxury. The dress — made of Tencel Luxe filament yard and cashmere — was hand-beaded with Swarovski crystals in L.A.

Sophie Turner and Zoey Deutch have worn Red Carpet Green Dress designs in the past, while for the 2019 Oscars, Laura Harrier and Danielle Macdonald wore ethical pieces by Louis Vuitton and Christian Siriano, respectively. 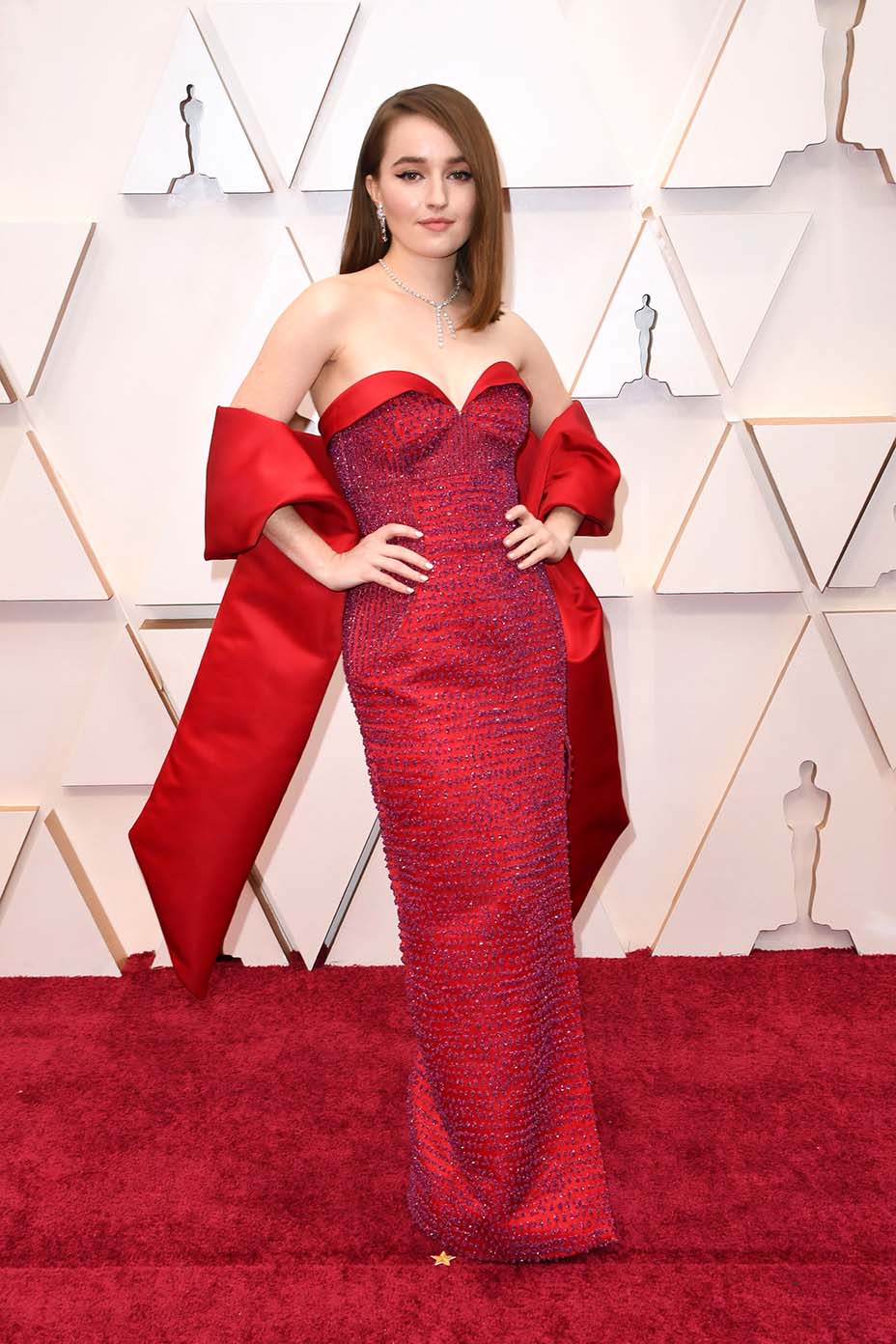 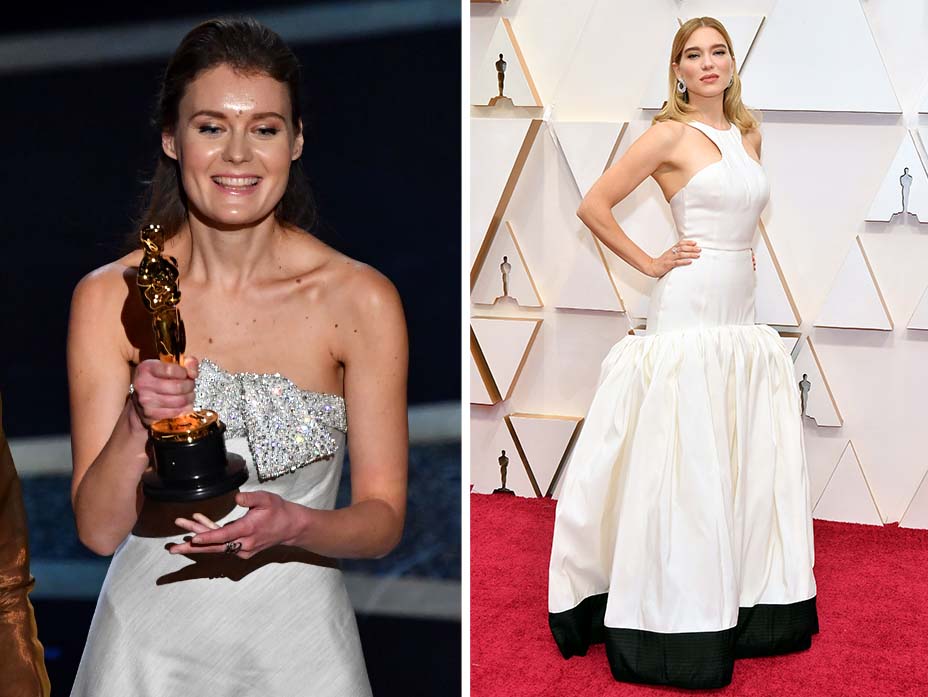 This year, secondhand fashion site ThredUp further encouraged Oscars attendees to be greener on the red carpet, explaining that single-use fashion is “one of our greatest climate polluters.” ThredUp wrote in an open letter that 26 billion pounds of clothes ends up in the trash each year and, by 2030, the waste is expected to increase by 60 percent.

Charlie’s Angels helmer Elizabeth Banks also seemed to answer their call, repeating a red, strappy Badgley Mischka dress that she wore to the Vanity Fair Oscars afterparty in 2004 and to her friend Susan’s wedding party. She tells THR that she recently moved and rediscovered this dress hanging in the back of her closet and decided to put it on again for the 2020 Vanity Fair party. “Usually we give back borrowed dresses from red carpets but I was gifted this one,” she says. “I wanted to up-cycle it not only to honor the gift but also to honor this moment, 16 years on, when we know so much more about sustainability and the impact fashion is having globally. Why waste this beautiful dress when we can simply modify it anew?”

Banks adds, “I also want to call out the silly culture that shames women for wearing these gorgeous creations more than once. If wearing a dress more than once is going to get attention, then let me help shine a light with that attention on NSI. I was inspired by Kate Middleton and proud it still fit!”

Also at the Vanity Fair bash, Oscar winner Laura Dern swapped out her Armani Prive gown to recycle one of her own: a black Armani dress custom-made for Dern in 1990 that she previously wore in 1995 and 2013. 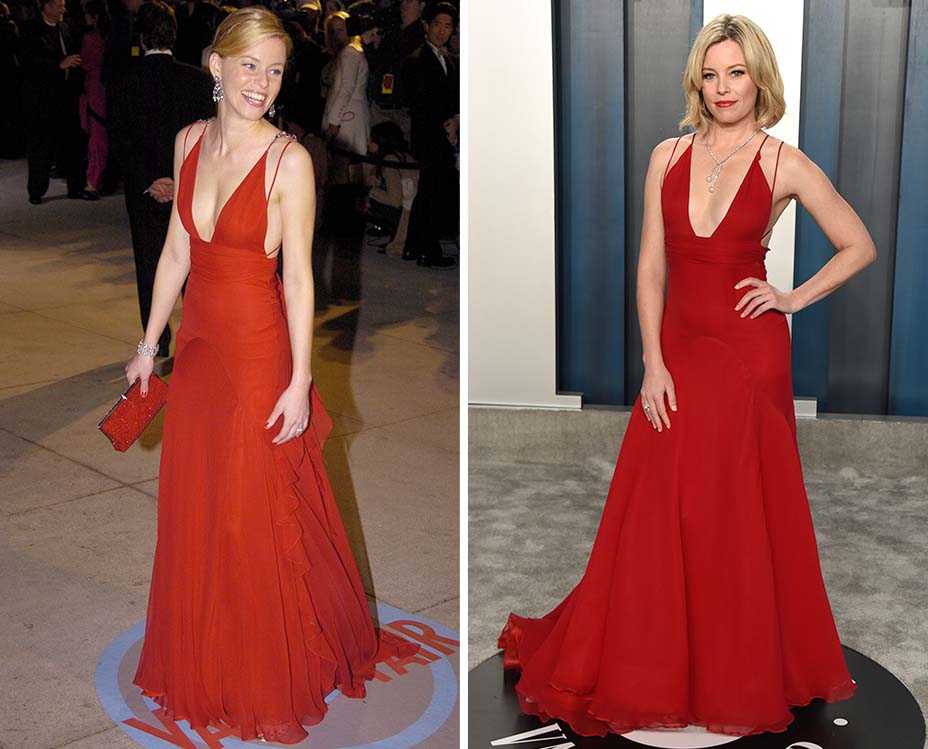 Off the red carpet, Phoenix is going beyond just recycling his tux — he left the SAG Awards to attend a pig vigil, stopped by a vegan protest before the Toronto International Film Festival and was behind some of the plant-based meal changes this awards season.

It seems the Oscars are finally starting to go green.