How much will Joe Biden move the needle with Hollywood’s donor class? We’re about to find out.

On May 8, Biden — who’s slated to announce his presidential run April 25 — will be the guest of honor at a star-studded Beverly Hills fundraiser. According to sources, the event will be held at the home of designer Michael Smith and his husband, James Costos, who was U.S. ambassador to Spain during the Obama administration (a spokesman for the couple declined to comment). This will be the first L.A. campaign fundraiser for Amtrak Joe — though he swept through town in October for a $5,000-per-plate dinner that raised more than $100,000 for his PAC, and which was attended by Paramount’s Jim Gianopulos, Sony Pictures’ Tom Rothman, Entertainment Studios’ Byron Allen, ICM Partners’ Chris Silbermann, venture capitalist Chris Sacca, entrepreneur Jon Vein and Quibi’s Meg Whitman. Co-hosts for the May 8 event — tickets will be $2,800, the maximum any individual can give to a candidate — are still being finalized, according to two sources, but Jeffrey Katzenberg has committed his name.

Biden’s entry into the race comes in the wake of first-quarter fundraising filings for more than a dozen campaigns, which revealed a lackluster pull for the candidates — at least so far — compared to previous election cycles. Combined, the Dem hopefuls raised about $75 million during the quarter, with Vermont Sen. Bernie Sanders leading the way ($18 million) and California Sen. Kamala Harris second ($12 million). But overall, the $75 million haul was about the same amount that just three candidates raised in the first quarter of 2007 ahead of the 2008 election. The crowded field seems to have big-ticket donors wary to go all in on one candidate.

“A lot of the bundlers aren’t getting involved yet in the same way they did in 2007. They’re saying, ‘There are so many good candidates, so I’m not ready to open the floodgates yet. But I’ll write you a check,’ ” says a California-based staffer for one of the major candidates. “They haven’t gone to their entire Rolodex yet — so it’s frustrating. People aren’t getting into bed early in the same way that they did for Hillary, [John] Edwards or Obama.” 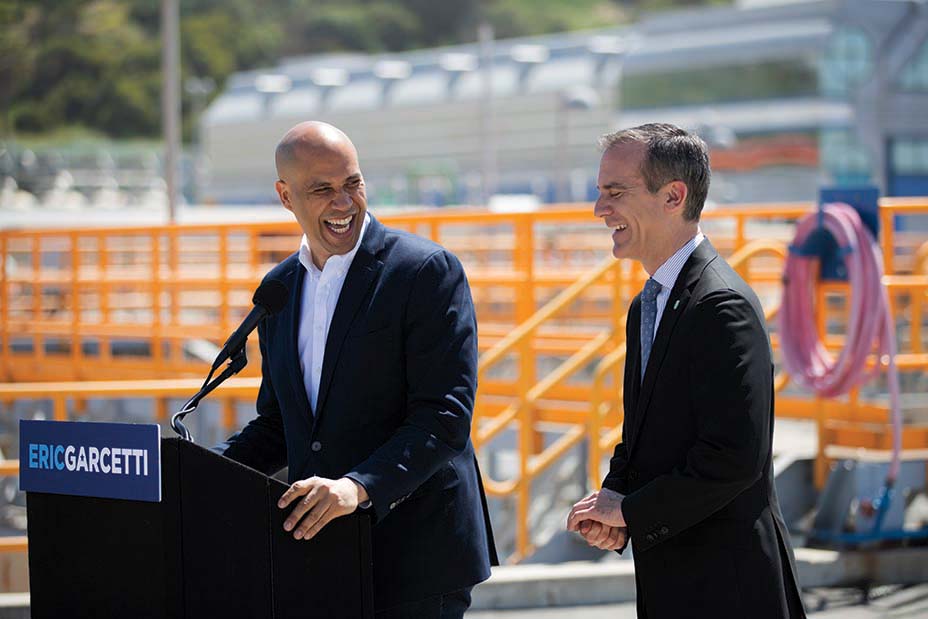 But that won’t stop candidates from trying. Harris has held almost a dozen L.A. fundraisers, including a March 20 event at the home of J.J. Abrams. And while she remains the favorite to win California’s primary, South Bend Mayor Pete Buttigieg has stolen some of her thunder in recent weeks. The 37-year-old was in L.A. on March 29 for a taping of Bill Maher’s HBO show and used that trip to make the rounds. He is expected to be back for three L.A. events on May 9 — and Ryan Murphy will co-host a major Buttigieg fundraiser at his home June 19. New Jersey Sen. Cory Booker, also a Hollywood favorite, toured a water reclamation plant in Playa Del Rey with L.A. Mayor Eric Garcetti in honor of Earth Day on April 22. Into this fray enters Biden, whose high name recognition is, in the current climate, both an asset and a potential liability.

“People here know Joe and love him and they’ve been waiting for him because he’s their guy. But he still needs to make the argument — just as much as any other candidate — how he plans to beat Donald Trump,” says one consultant. “Which lane is he going to pick? Is he campaigning as the elder statesman? Or the guy who can win in the Midwest? Hopefully it will be a combo of those things.”

Others, however, are saying that Biden’s entry into the race isn’t causing alarm bells.

“I don’t think he jumps in and blows away the field,” says the California-based staffer for one of Biden’s rivals. “The online money won’t be there for him in the way it is for Beto [O’Rourke], Bernie and Pete. The bundlers will try really hard to convince people to write him a check out of respect, but you probably won’t see the groundswell that you saw for Hillary or Obama.”

This story also appears in the April 24 issue of The Hollywood Reporter magazine. To receive the magazine, click here to subscribe.