In 2001, comics superstar Joe Madureira abruptly walked away from Battle Chasers, his creator-owned fantasy series that was selling as well as any top book that Marvel or DC were putting out.

Now, 20 years later, Madureira, no longer a comic artist but an established video game developer and creative director, is finally ready to finish what he started, restarting Battle Chasers by beginning exactly where he left off.

The two-decade time span between the last published issue, no. 9, and the new installment, no. 10, may be the longest ever between issues in comic book history and the industry has undergone plenty of turns around the sun in that time. Still, Madureira is ready, really ready, he says, to do it.

“I can’t decide if this is the absolute worst time to be doing this or the best time,” Madureira says, talking to The Hollywood Reporter from his home in Austin, Texas.

The new comic is due to hit by year’s end, once again from publisher Image Comics, and will be followed monthly by no. 11 and no. 12, with a goal to tell a complete story arc. Madureira is writing the comic but, as opposed to the previous issues, not drawing. Instead, he handed those duties to Ludo Lullabi, whom he discovered while making 2017’s Battle Chasers: Nightwar role playing game. He does plan on drawing variant covers, however. And to whet appetites, the return issue will be 32 pages, no ads.

“I just want to make a cool comic that people talk about,” Madureira says. “It may be a little more edgier, a bit more mature than before. I’m curious to see how it will be received.”

Only nine issues of Battle Chasers were published, between 1998 and 2001, a handful by Jim Lee’s Wildstorm imprint, and then the rest by Image Comics. The comic was a showcase for Madureira’s art, a style that was inspired by 1980s comic artist Arthur Adams and manga. The story had cast that included a nine-year old girl named Gully, searching for her father with some magical gloves; Garrison, a swordsman with a magical blade; and Red Monika, a bounty hunter. A golem named Calibretto and the wizard Knolan were also part of the crew taking on armies of villains.

But to the consternation of fans, the comic quickly began experiencing delays between issues and Battle Chasers became known for being consistently late. Instead of being monthly, only three issues a year were being published.

Madureira says the tardiness was due to personal and professional reasons. Plus, he admits being undisciplined and just being too young. “Not having the pressure and editor of big company breathing down my neck was a factor. It was a slippery slope, having all that creative freedom. It wasn’t a good thing. I’m sure people were not happy about that.”

And after a certain point, Madureira simply stopped working on it, turning to his other passion, video games. He was 26 and ready for a break – “I didn’t know how long that would be but I assumed I would come back in a year or two,” he says of his thinking at the time of his departure. He was, in many ways, done.

Being done by your mid-20s isn’t a stretch if it’s in an industry that you’ve already been in for 10 years. Madureira got his start as an intern at Marvel at age 16. His rise was meteoric; by 19, he was drawing one of Marvel Comics’ flagship titles, Uncanny X-Men, which was selling hundreds of thousands of copies a month, and he was now one of the industry’s biggest talents. He left three years later to begin Battle Chasers. It was an instant success, selling between 150,000 and 250,000 per issue, and even Hollywood came calling; the title was set up in the early 2000s at Twentieth Century Fox.

“I remember framing that page in Diamond (the distributor’s catalogue that listed a given month’s top sellers),” Madureira recalls. “I never thought some fantasy comic would compete with Marvel and DC titles.”

But video games were now his interest. And while he sporadically returned to draw short arcs for Marvel – three issues on a Wolverine title here, three issues on a Spider-Man book there – he was now designing video games for startups and established developers, full time. In 2015, he co-founded studio Airship Syndicate and the company is currently working on two games, one called Ruined King: A League of Legends Story, and one unannounced.

Gaming is still his main focus but part of the Chasers’ return was spurred by a Kickstarter campaign for a Chasers’ video game. One of the rewards promised was new issues. The game came out in 2017, the comic…well, Maduereira knows he has scheduling issues.

“I know I can’t commit to a monthly book,” Madureira says, which is why he enlisted Lullabi, and why he wants most of the arc done before he puts the book out. “I don’t want to screw this launch up.”

And he is well aware how genre and expectations may have shifted — as he says, for example, “We’re in the post-Game of Thrones era and fantasy is viewed differently now,” — and so has his creative approach.

“I definitely cringe at some of the choices I made 20 years ago,” he says. “I feel like I’ve become a better writer and creator and I’m excited to do more. Hopefully we can keep it going.”

Check out some unlettered pages from no. 10 below. 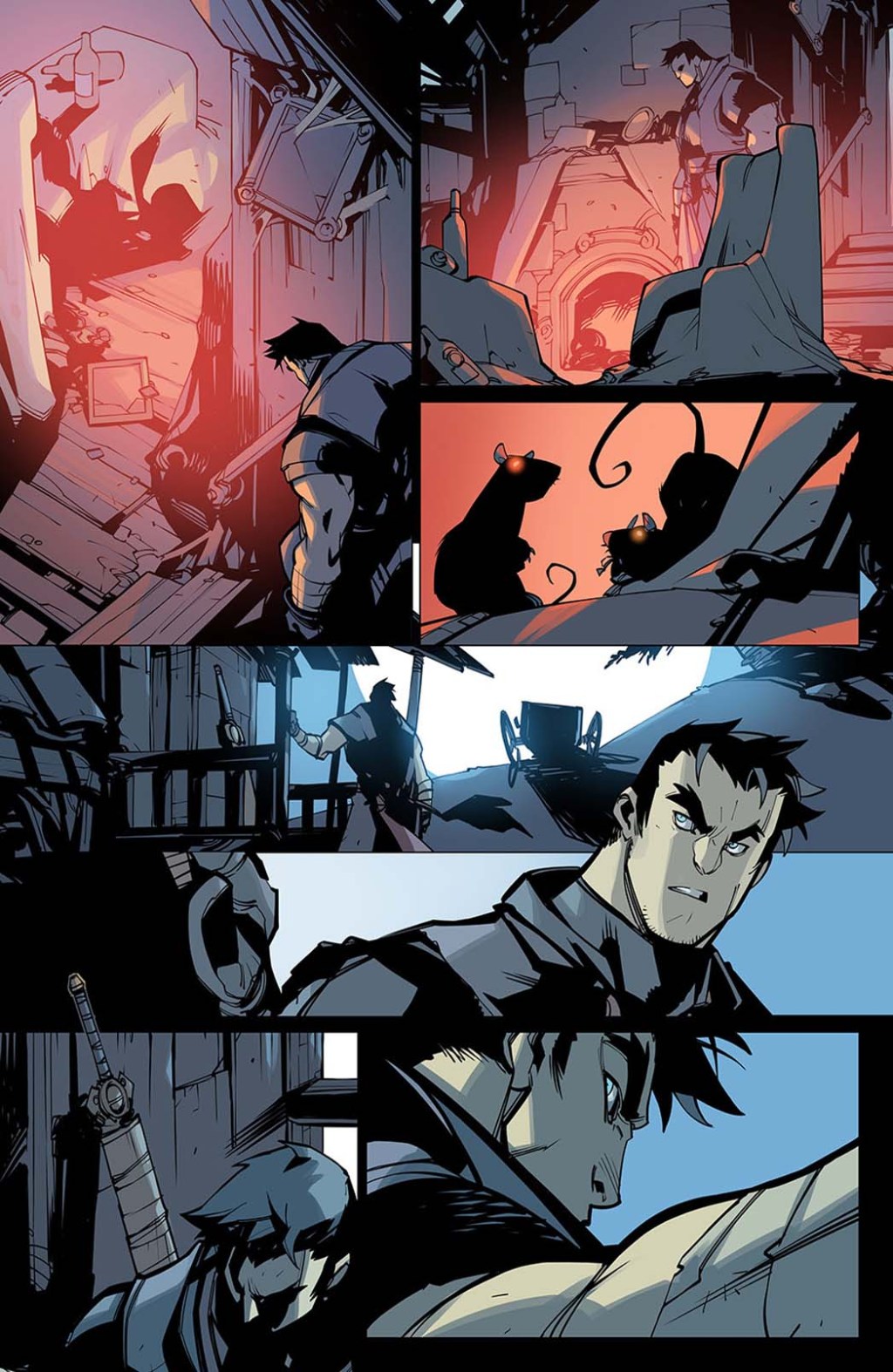 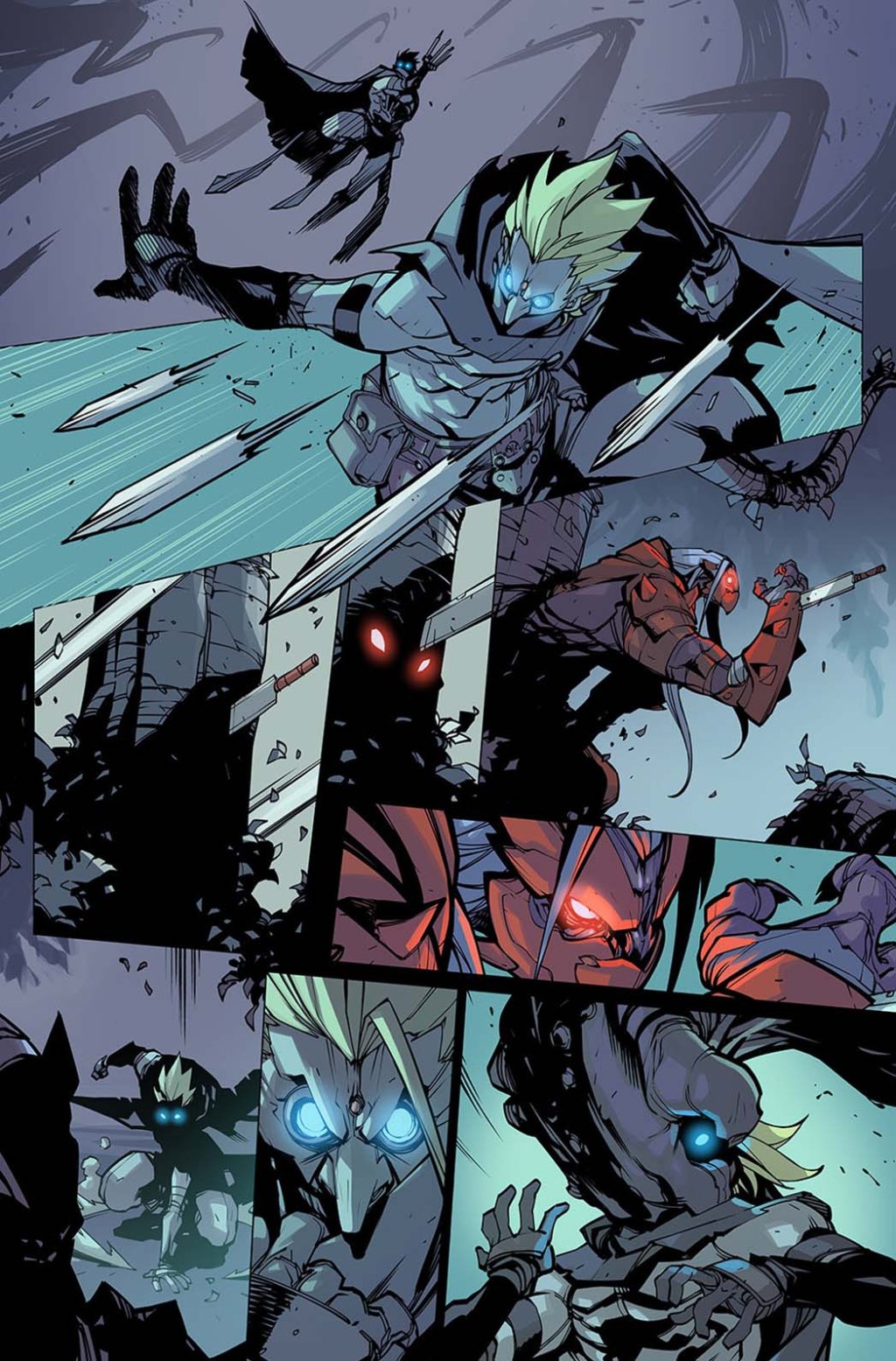