Sunday evening started out magically for Joey King at the 77th annual Golden Globes — her Globes debut — where she was nominated for best actress in a TV movie or limited series for her role in The Act.

After leaving the Beverly Hilton just before midnight, King headed to the Warner Bros./InStyle afterparty to celebrate with co-star Patricia Arquette, who took home a best supporting actress Globe for her role as King’s onscreen mother, Dee Dee Blanchard, in The Act.

But at 9 a.m. on Monday, King tweeted, “Patricia Arquette accidentally hit me in the head with her Golden Globe. That sentence will give me bragging rights for the rest of my life.” The post was accompanied by two images of the 20-year-old star with a significant round bruise on her forehead, marking the imprint of the bottom of Arquette’s statuette.

Patricia Arquette accidentally hit me in the head with her Golden Globe. That sentence will give me bragging rights for the rest of my life. @PattyArquette pic.twitter.com/lQDewQpa1C

Describing the incident to The Hollywood Reporter, King said, “Patricia and I were in the video photo booth elevator at the InStyle afterparty and we were trying to do a funny little skit, where we were singing opera. And as I was taking a bow, she raised her Golden Globe statue up and whacked me in the forehead. Those statues aren’t light at all!”

Joey’s mom, Jamie King, who was also on the scene, weighed in with THR. “Joey and Patricia were doing one of the skits in the elevator photo booth at the InStyle party and Patricia was pretending to be an opera singer, wearing a horned hat,” she said. “Patricia threw her arms up in the air, as Joey was taking her top hat off to take a bow, and Patricia smacked her in the head accidentally!”

Laughing, she continued, “Joey is a little Lucille Ball and does physical comedy, so I didn’t know if it was real or not, at first. But when I realized it was real, I thought it was the funniest thing that could ever happen. Joey and Patricia adore each other, so it was absolutely iconic that she would bonk Joey with her Golden Globe.” 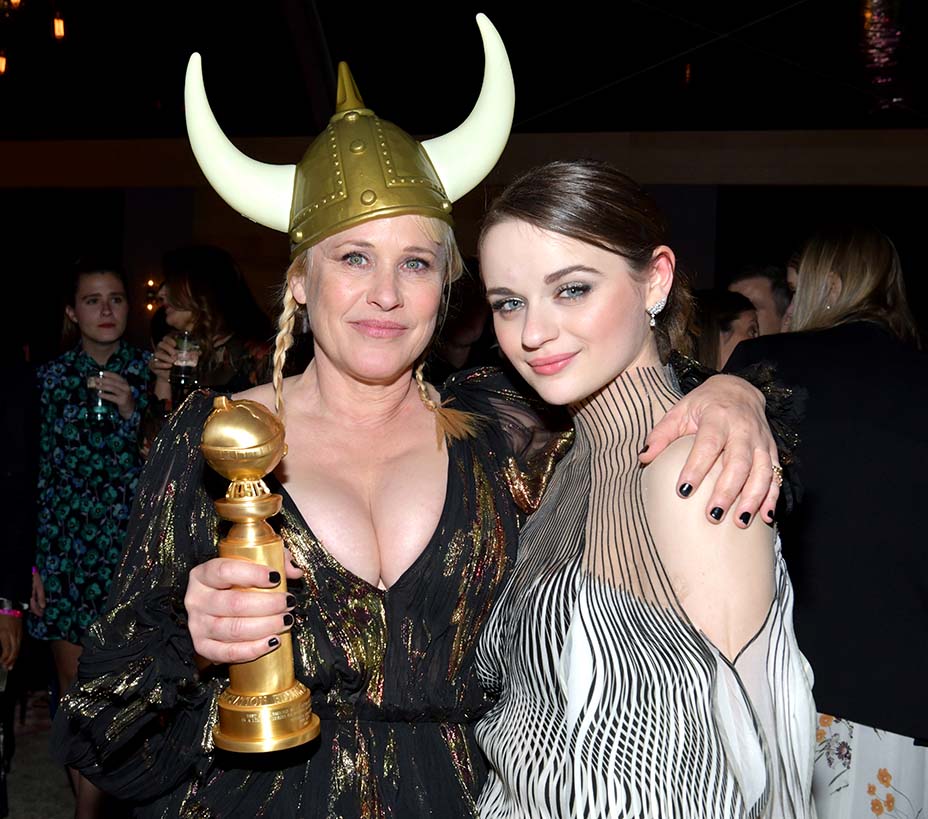 Asked how it felt to have the statuette hit cap off her first Golden Globes, King said, “You know, it felt pretty great. If I’m gonna get hit in the head with anything, it might as well be my friend’s Golden Globe.”

As for the evening’s other adventures, King added that “Patricia, [actor] Calum Worthy, Patricia’s boyfriend Eric White and I danced the night away together, and it was an absolute blast.”

Her other memorable run-in of the night was with Martha Stewart. “One of my greatest highlights of the evening was meeting Martha Stewart and hearing that she loved my performance in The Act,” King told THR. “I’ve used her recipe to make her famous pecan pie three times during the holiday break. It was such a surreal moment!”