John Oliver on Sunday’s Last Week Tonight took a deep dive into President Trump’s issues with the World Health Organization or, as Oliver called it, “one of the president’s favorite punching bags.”

“Over the last six months, Trump has consistently tried to deflect blame for his handling of the coronavirus onto the WHO, China and the close relationship he claims the two have,” Oliver said.

Oliver showed a news clip noting that in the beginning of July, Trump said that the U.S. would be “terminating” its relationship with the WHO and “redirecting those funds to other worldwide and deserving urgent global public health needs.”

Oliver added that Trump had formally submitted a notice to the United Nations to withdraw from the WHO that will take effect July 6, 2021. Oliver then laid out his case about the importance of the WHO and why he believes the U.S.’ withdrawal would be detrimental. He pointed out the WHO’s contributions over the years, including eradicating smallpox — which killed 300 million people in the 20th century alone — in 1979.

Oscars Host Jimmy Kimmel Reacts to Noms, Betting on Awards Show: "They're Encouraging Someone With a Gambling Problem to Slap Me"

The WHO also develops the flu vaccine every year, Oliver noted, and tracks dozens of other infectious diseases worldwide, from monkeypox to yellow fever to ebola. Oliver said the WHO’s annual budget is $2.4 billion a year, which equals the budget of a large U.S. hospital. “At its best, the WHO does vitally important work for shockingly little money,” Oliver said.

He added that there have been criticisms of the organization, however, including being “too slow” to respond to the Ebola outbreak in 2015, but Oliver said its past performance isn’t what irks Trump. Instead, one of Trump’s biggest complaints is how much the U.S. pays to the WHO ($446 million a year versus the $43 million paid by China). However, the way the WHO is set up, 80 percent of its donations are through voluntary contributions, and most of what the U.S. pays is a voluntary contribution, whereas China “chooses to pay almost nothing,” Oliver argued.

It’s set up that way because of a policy pushed through by the Reagan administration that froze states’ dues to the WHO at 1990s levels, which means the U.S. has paid more and more every year to make up the difference, Oliver said. “That’s why we pay so much relative to China,” Oliver said. “It’s mostly because we choose to because the WHO is underfunded because of something we did.”

He also argued that the U.S. is incapable of handling the WHO’s work itself, given that some countries are not likely to welcome U.S. health workers inside their borders. He added that deciding to pull away from the WHO in the middle of a pandemic is like “taking the fire engines away in the middle of fighting the fire or getting rid of the life boats while the boat is sinking or choosing to edit Kevin Spacey into a movie just weeks before a release date. It’s the worst possible decision at the worst possible time.”

Oliver also noted that the WHO is on the verge of eradicating polio, and the U.S. is the second-largest funder of the global polio eradication initiative; the U.S.’ decision to pull its funding could be a major setback to that.

“And look, it is fine if the U.S. has problems with the WHO. It has problems,” Oliver said. “But the solution clearly isn’t to walk away. It is to try and fix them. But the only way for the U.S. to have a say in how that happens is to have a seat at the table, and we’re about to just give that up.”

Oliver wrapped his show on a completely unrelated note: with an update to his tongue-in-cheek “feud” with the residents of Danbury, Connecticut. The city council voted last week to rename its sewage plant after him on the condition that he physically attend the ribbon-cutting ceremony. So last week, Oliver made the 90-minute trip from New York City to the town.

Oliver gave a little speech, saying: “There is a reason this sewer plant means so much to me and that’s that it represents everything that we need the most right now, because think about it: This place takes the worst that humanity can produce and transforms it into something that we can live with. And now more than ever, there’s something inspirational in that. Because at the end of this awful, awful year, what could be more important than evidence that if we want to, we can come together, overcome our differences and sort our shit out? Mr. Mayor, I could not be more proud to have my name on your shit sorter.” 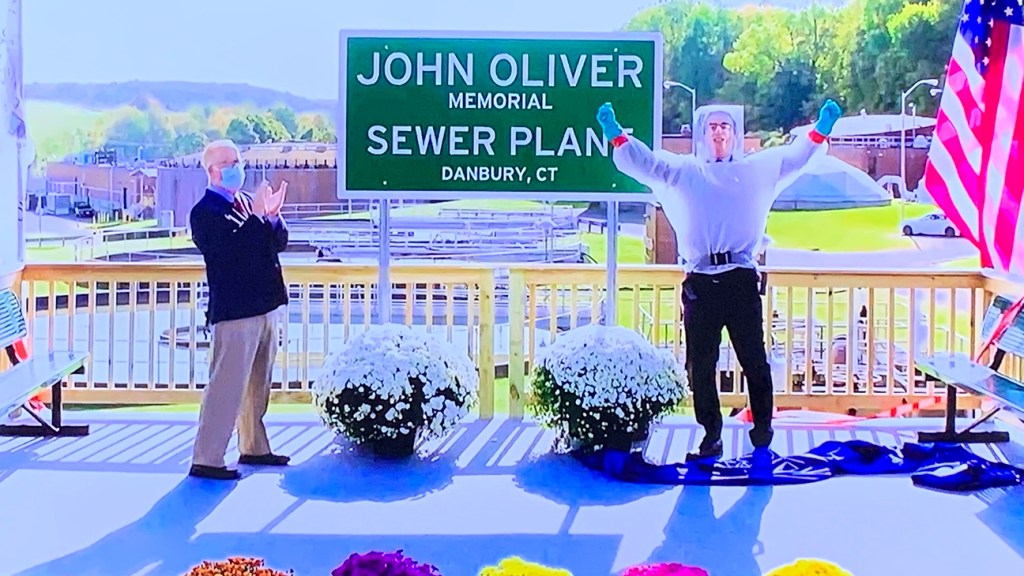