Since working together on The Hangover Part III, director Todd Phillips, editor Jeff Groth and director of photography Lawrence Sher have become something of a creative dream team. The three honed their collaboration skills on the last film in the blockbuster comedy trilogy, followed by the dark comedy War Dogs. But Warner Bros.’ Joker, an intense character study of the comic book villain (and their third collaboration), is by far the most complex endeavor they have made together. It is a film that both Groth and Sher believe is very much a sum of its collaborative parts.

“One of the things that makes Todd the director that he is, is his ability to understand that the movie is constantly being rewritten,” says Sher. “That’s a really good quality in any director, because it uses all the creative partners to make the movie what it is, as opposed to just having a really fixed plan and not really understanding that there might be another great idea just around the corner if you just open that field of view up.”

For their work on Joker, Groth and Sher earned their first Oscar nominations, for editing and cinematography, respectively. Groth, 45, and Sher, 49, talked to THR about their creative collaboration with Phillips, the unique challenges that Joker presented and why the ’70s-inspired film is actually quite timeless.

Was there something in one another’s professional skills that you admired before working together?

Lawrence Sher Jeff [has] the ability to weave all the elements together. Whenever I see the finished cut of a scene that Jeff has put together, it’s amazing how they’re able to seamlessly show all the pieces of coverage without it feeling disjointed and yet always track the story and the performance first and foremost. That’s not that easy to do, frankly.

What’s different about the way the three of you work together?

SHER The uniqueness of the relationship between the three of us comes from watching other directors work when I’m a cameraman on other people’s movies. We’ve always felt like there’s a point of discovery in every scene that we’re looking for. For Joker, we might know every shot, from [Joaquin Phoenix] with the sign to him getting beat up in the alley to that final shot pulling away from him. But even within that, shooting top to bottom, which can sometimes be really hard on actors, allows us to discover parts of a shot that maybe we wouldn’t have planned for. We went even further … sometimes we’d just start rolling the cameras the minute Joaquin would walk on set. You’re finding little moments of discovery as you make it. There’s both this beautiful combination of a plan — in which we think very clearly about the intent of every scene long before we shoot it — and also being really open to the actor’s whims and flexibility and changing that plan if we start to realize it’s not working.

GROTH There are many times a second?camera captures things that the A-camera wouldn’t capture. While that then takes twice as long to look at, you’re finding things within the scenes that capture a specific emotion or a specific beat or movement that’s going on — particularly because Joaquin was doing so much?that you wouldn’t have seen?otherwise. 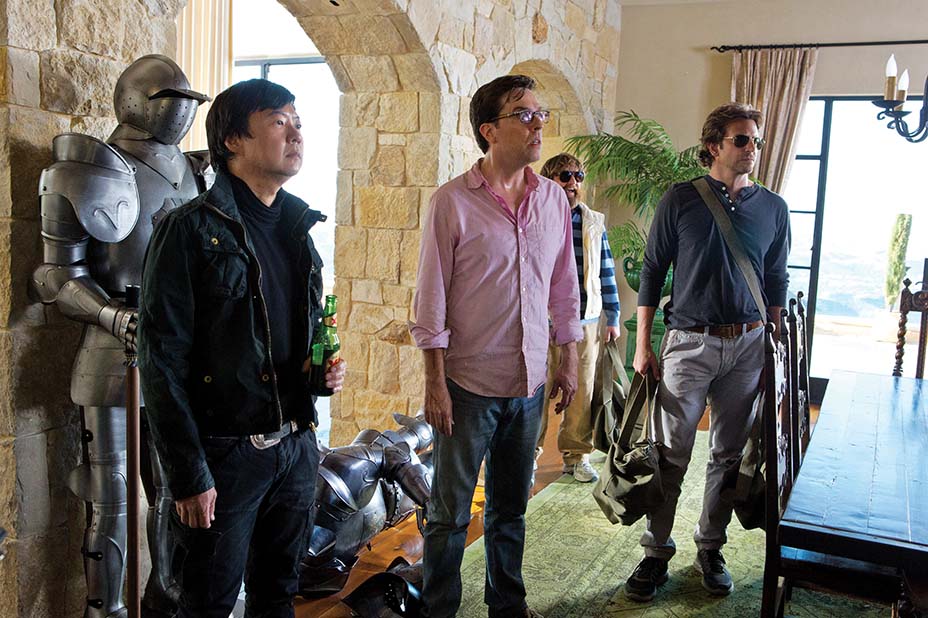 Was Joker a unique professional experience for you?

SHER From a filmmaking standpoint, it felt very similar to the other films I’ve made with Todd. The way in which we approach the movie didn’t really change. I think the main thing that made it unique was it was such a deep dive into a character and it was so singularly about a character for so much of the movie. It gave us the opportunity to lean more into the artistic side of our filmmaking skills. groth For me, it felt like the sort of thing that my entire career’s been building toward, which is an amazing script, an amazing actor, a crew that is passionate about making it and a director that I absolutely love working with. I think it was ?genius.

I heard that you guys edit at Todd’s house. Is that unusual?

GROTH I was cutting during production, so I was in New York. Once the dailies were processed, [we would] beam them to Los Angeles and have somebody there processing them. That happened during the first three months of production, and then, once we got back, we worked at Todd’s house. Obviously, Todd has made a lot of movies and gets to cut in the environment in which he wants to cut. I think it’s just a matter of being comfortable and?being allowed to have the space to work creatively and look at things over?and over without a lot of distraction.

You both got the script more than a year in advance. What does that allow for, and how much do the two of you communicate throughout that time?

GROTH When I’ve read a script, I’ll send Todd my thoughts about it and just generally internalize it. But with this one in particular, I told Todd immediately, “I’ve never seen a script so clear as far as the movie that you want to make.”

SHER My experience is that we don’t talk as much as one would think. It’s little conversations here and there, little bullet-point ideas of the direction. Sometimes it’s just one idea that Todd has that is meant to stick in my head and to dream about. But mostly, I’ll take the script early and do an entire creative pass. Then we’ll come together closer to production. That way, I have some ideas that are unfettered by him, because it might give a new perspective on a scene. Then together, we’ll go through it, scene by scene, and join all the ideas to come to a consensus on which direction to take it.

There’s also the amazing score by Hildur Gudnadóttir. Did it affect your work, or does it come in so late that it’s added to what’s already there?

SHER For me, it came on day six or so. When we shot that bathroom scene, in which [Arthur] dances and makes this metamorphosis after killing the Wall Street guys, we played [Gudnadóttir’s theme]. From that point forward, we would often play that music. If we didn’t play it out loud, we would play it in our headphones so that the operators could hear it. It did affect the movie, because music has such a powerful effect on pace and energy. It affected the camera movement. It really became part of the filmmaking process in a way that I certainly hadn’t [experienced] ?before. 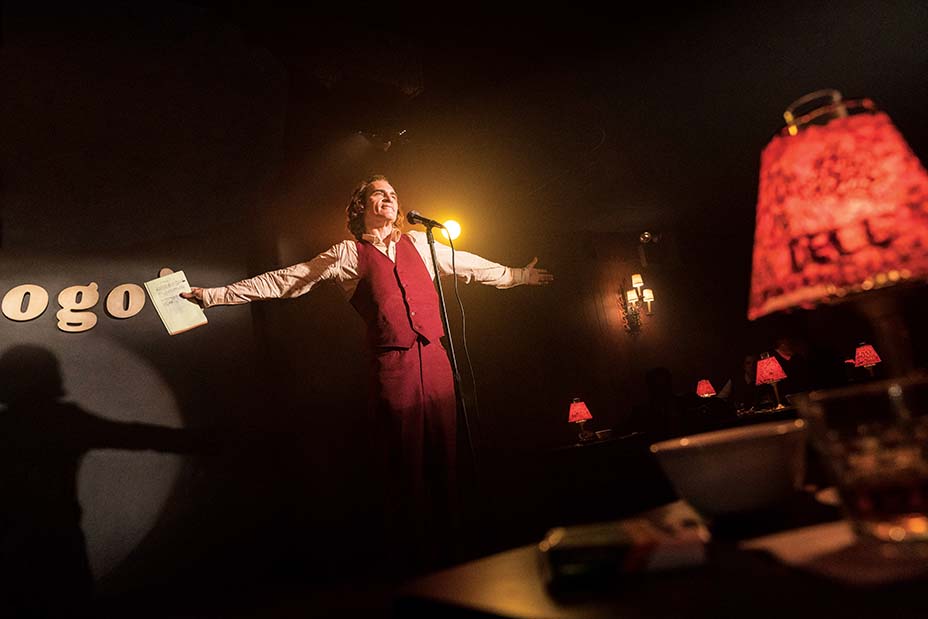 You have talked a lot about the movies that influenced you and the ’70s vibe of Joker. What do you think makes this movie extremely contemporary?

SHER Some of the issues that the movie deals with are still present today. I think setting it 20, 30, 40 years ago and seeing that those issues are still the same makes it resonate even further because we recognize that we haven’t really made the adjustments in our society to solve these?ills.

GROTH Having it be about one character, and being more of a character study, does give it more of a timelessness. It’s about certain ideas about being an outsider. Ultimately he’s a romantic and he has hopes and wishes for his life that I think everybody can identify with — at least at the beginning of the movie.

Is there a sequence or a scene that was particularly tough or one that you’re really proud that you pulled off?

SHER There are always a couple scenes in every movie that become the thorn in the side of preproduction. That subway sequence, we just knew we couldn’t simply be driving down a subway track in reality, even though we try to drive everything from reality first. The problem to solve was, how do we do it on a stage in a way that hopefully nobody ever thinks for a second that we’re doing it artificially but can give us all this control to make something that is surreal and elevates it past reality? The way we solved it was with these big LED screens that could project backgrounds onto the outside of the train car so it looked like we were driving up and down subway tracks but would allow us the flexibility of lighting and being able?to, on the push of a button, travel a subway platform outside those windows or travel another subway car or lights or any of those things that would allow us to get that fever dream of flickering light as the scene builds and builds to violence. I was super happy with the way it turned out.

What do you enjoy about a long-term relationship between an editor and a DP?

GROTH Trust. That’s the number one for me. The same thing with the director. If you’re back on the job with them, you know that there’s a level of trust. One thing I endeavor to do while we’re in production is serve whatever Larry and his crew need. It’s not about my schedule at that point. I know we have these looming deadlines every day and money being spent every day. Whatever they need, I try to be there for them.

SHER I think trust is really the best way to describe it, simply because on the second time and the third time, you’ve cleared away all of that foundation to build a relationship, and now you can simply work purely on the creative side. It just makes the process a lot easier, frankly. You can throw out ideas and not have to think, “How’s Jeff going to react? I’m not trying to step in his rice bowl.” If he sees a problem, or if he feels like he needs something, you don’t go into your little camps of defensiveness that sometimes we can do as human beings.

Do you guys ever hang out socially? Beers and poker?

SHER No. But we will after this.

This story first appeared in a February stand-alone issue of The Hollywood Reporter magazine. Click here to subscribe.