Jonathan Groff decides we should take advantage of what might be New York’s last suitable night for al fresco dining in 2019. He sits down at one of a dozen empty tables outside the otherwise packed Hell’s Kitchen bistro and announces, in a tone suggesting more mischief than regret, that he must first make a call.

Groff is starring in a limited revival of Little Shop of Horrors, and it is a very hot ticket. The Broadway legend on the other end of the line has apparently thrown a Hail Mary in hopes of scoring seats to the night’s sold-out performance. Hamming up this exchange for my amusement, Groff is game to play broker for the Tony and Oscar winner who originated the role of Cabaret’s tuxedoed emcee — and, maybe, anybody else who has his number.

“This is basically my part-time job,” says Groff of fielding requests, jotting down credit card information and negotiating pickup times and locations for friends both famous and civilian. “It was the same thing when I was doing Hamilton,” he adds of his year playing King George III in Lin-Manuel Miranda’s hip-hop history lesson. “But I was really only onstage for nine minutes during that show, so the tickets were probably full-time.”

The 34-year-old actor seems eager to please, not unlike current alter ego Seymour. Little Shop’s nebbish, sweet and ultimately doomed florist nurtures a manipulative plant even as the pet’s homicidal tendencies grow more and more apparent. Those familiar with the campy musical comedy know that it suffers no shortage of blood, but it’s a nursery rhyme compared with Groff’s recent work on truecrime thriller Mindhunter. Playing a curious FBI agent in David Fincher’s Netflix series has perhaps done more for his ascendant profile than anything yet. But two seasons on the drama have meant two nine-month stints in Pittsburgh, filming interrogation scenes with character actors who bear uncanny resemblances to famous serial killers.

So even on a two-show day like this late- October Saturday, the rigors of theater are easy work for Groff. Over a couple of hot toddies, in between humoring three smitten waiters at the restaurant at which he’s been a regular since Little Shop went into previews down the block, the actor appears to be in his element. “Theater is such a communal, familial medium and interactive experience,” notes Groff, who says he recognizes faces in the crowd during most performances. “Mindhunter, for me at least, is a very private experience.”

Groff plays against type on Mindhunter. Wide-eyed with an almost perpetual grin, his is a mug you wouldn’t be surprised to find in an illustrated Merriam-Webster — cozied up to the entry for “baby face.” Much of his previous acting career leaned into this, starting with his breakout. The Pennsylvania native came to New York at 19 and landed the lead in the musical Spring Awakening by the time he was 21. “I was just auditioning for the ensemble of Broadway shows,” says Groff. “I hadn’t really developed the taste to appreciate something like Spring Awakening until I was in it.”

New York’s “It” Broadway show of the aughts, the rock opera about sexual discovery among 19th century German teenagers earned Groff his first Tony nomination. He spent two years in the production before leaving in 2008, at the same time as friend and co-star Lea Michele, to pursue film and television. The work that immediately followed — Ang Lee’s Taking Woodstock, a recurring spin on Michele’s Fox hit Glee, a supporting role in the second season of Kelsey Grammer’s cult drama Boss, voicework in Disney $1.3 billion smash Frozen (he’ll reprise his role as Kristoff in Frozen 2, out Nov. 22) — got him on the radar for vehicles of his own. When HBO began casting Looking, its 2014 dramedy about a group of gay friends navigating an evolving San Francisco, Groff was soon tapped to front the series.

“He will search for the best version of every scene and will work until everyone drops,” says Looking executive producer Andrew Haigh, who cast him as Patrick — boy-nextdoor- ish, like the actor, but privileged and problematically fickle. “He is also wholly unafraid to be vulnerable onscreen.”

Looking lasted for only two seasons and a wrap-up movie, and its premature demise allowed Groff to do Hamilton, which he joined while the show was off-Broadway in early 2015, and then made the jump to Broadway. His supporting part as the aforementioned royal — with interstitial lamentations for the seceding Colonies, sung like a lovelorn (and supremely pissed) Davy Jones — earned Groff his second Tony nomination. But Groff wasn’t long for Hamilton, either. He was circling his next TV project, a moody prestige procedural about the early days of the FBI’s Behavioral Science Unit, based on the 1995 memoir Mindhunter by criminal profiler John E. Douglas.

Mindhunter, the book and the series, delves into the morbid minutiae of notorious murder cases with an emphasis on interviews between law enforcement and criminals in the late 1970s and early 1980s. Groff was in contention for the role of FBI agent Holden Ford, based loosely on Douglas. First, he had to prove to director and executive producer Fincher — a filmmaker long admired by Groff, who says he has “a boner for his brain” — that a jovial Broadway star most widely known for singing with a reindeer in a Disney cartoon could have the upper hand with serial killers.

It was not Groff’s first audition for Fincher. Seven years earlier, he was in the running to play Napster co-founder Sean Parker in The Social Network. “My agents said, ‘You have an audition in L.A. with David and Aaron Sorkin,’ ” Groff recalls. “If you get it, you start rehearsal the next day, so pack your suitcase for two months. They really like your tape, but they’re also considering Justin Timberlake.” The part went to Timberlake.

“I did not feel then — and still don’t — that he had the inherent venality for that role,” Fincher says of Groff. “He is as decent and sensitive as anyone I’ve ever met.” 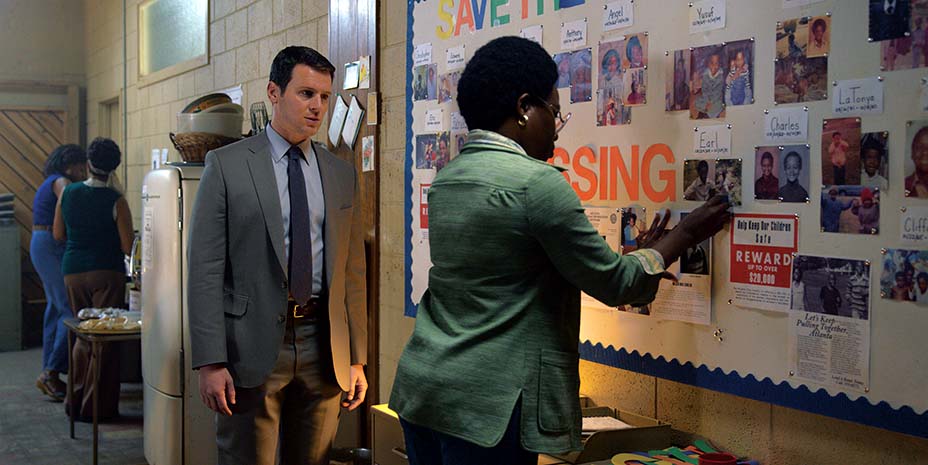 If venality is off the table for Groff, darkness is not. And though casting the song-anddance man was a source of curiosity for some in Hollywood before Mindhunter’s 2017 debut, the finished product didn’t elicit any skepticism from critics. Over the first season, Groff’s character goes from eager, milkdrinking company boy to a shell of the man introduced in the first episode. He alarms colleagues with the way he mirrors serial killers, until he has a panic attack after getting a bear hug from a necrophile. The second run, equally well reviewed after its August debut, saw a somewhat recovered Holden sit down with Charles Manson and, for the dramatic fulcrum of the season, investigate the Atlanta child murders of 1979-81.

“It is so impossibly bleak that I don’t think about it while I’m doing it,” says Groff, who confesses he finds watching the show more affecting than making it. “All due respect to people who feel like the character is inside of them or whatever, but I don’t have that. I would leave set, listen to Beyoncé, and that was it.”

After an hour and a half in his company, Groff reveals himself as a Lucille Ball historian, an avid bike rider, a devout New Yorker and someone who doesn’t seem easily bummed out — except when the conversation turns to success. His excitement over landing Mindhunter, he says, was immediately diluted by a pang of sadness. “Whenever something really great happens, it makes me feel a little bit depressed,” he says. “It’s like, this is never going to get better than this moment right now. I’m sitting in David Fincher’s office and he’s giving me this role.”

Talk of a third season of Mindhunter is on hold while Fincher focuses on his next feature. But the director did take a recent break from Mank, a biopic on Citizen Kane screenwriter Herman Mankiewicz, to attend Groff’s first Little Shop matinee with wife and fellow Mindhunter executive producer Céan Chaffin. It was a surprise appearance, but only because Groff hadn’t been checking his text messages. “I’m not good at my phone,” he admits.

Groff has not looked at his phone since that one call — which, while polite, now has him in danger of running late for curtain. He breaks the bad news of his immediate departure to one particularly adoring waiter, and we walk to the stand where his bike is locked. There, he pulls from his bag a cobalt helmet that could double as Tron cosplay. Bars of blinding LED lights on both its front and back, his headgear tells cabs to get the hell out of the way and signals to everybody else that this is a man who values safety over subtlety.

“Yeah, I do really love riding my bike in the city … I’m just not that hard-core,” Groff says of the helmet before encasing his tousle of sandy chestnut hair for the one-block ride to the theater and an expectant Joel Grey. “My mom bought this for me.”