On March 30, Jordan Peele will receive the director of the year award at CinemaCon, the annual con­vention of theater owners where Hollywood studios tout their wares. The honor represents a new career track for the New York City native, who always wanted to direct, he says, but got swept up in sketch comedy (he was half of Comedy Central’s wildly popular Key & Peele). He finally realized his original goal when he made the box-office sensation Get Out, a microbudgeted horror film that uses genre conventions to expose contemporary racism, much as 1975 film The Stepford Wives tackled male chauvinism back in its day. Peele, 38, spent years writing the script, about a young black man who travels to the posh estate belonging to his white girlfriend’s family only to discover a menacing plot against black people. Get Out, starring relative newcomer Daniel Kaluuya and produced by Blumhouse, QC Entertainment and Universal for a scant $4.5 million, has drawn a diverse audience and collected more than $140 million globally, making it one of the most profitable films of recent years. Peele spoke with THR about why he’s giving up sketch comedy for good to focus on directing and writing more social thrillers and why seeing Get Out in an actual theater is a must.

On opening weekend, nearly as many white people (35 percent) turned out to watch your movie as African-Americans (38 percent). Are you hoping Get Out offers people a different perspective about racism?

I can’t presume to say what everybody is getting from the film. It definitely, for lack of a better word, is a more fun way to engage in a discussion about race.

Black films have long been stigmatized as not being commercial. What lesson should Hollywood learn from films like Get Out, Hidden Figures and even Oscar winner Moonlight?

There was also Straight Outta Compton. I think the lesson is that when you give black voices a platform and the opportunity to tell our story, we will tell good stories just like anybody else. The power of story and the power of a well-crafted film or television show is really all you need to speak to people. I think Hollywood is sort of catching up to that. We’re at the beginning of a renaissance where people are realizing black films can not only work at the box office, but they can work because there’s been a void. Get Out is fresh and novel and new because at the base level it has a black, male protagonist in a horror movie. It is no mistake that the iconic image from this movie is Daniel’s face with tears streaming down his cheeks. We haven’t seen that before. Usually in horror movies — as in Blair Witch — it is the white girl’s crying face. 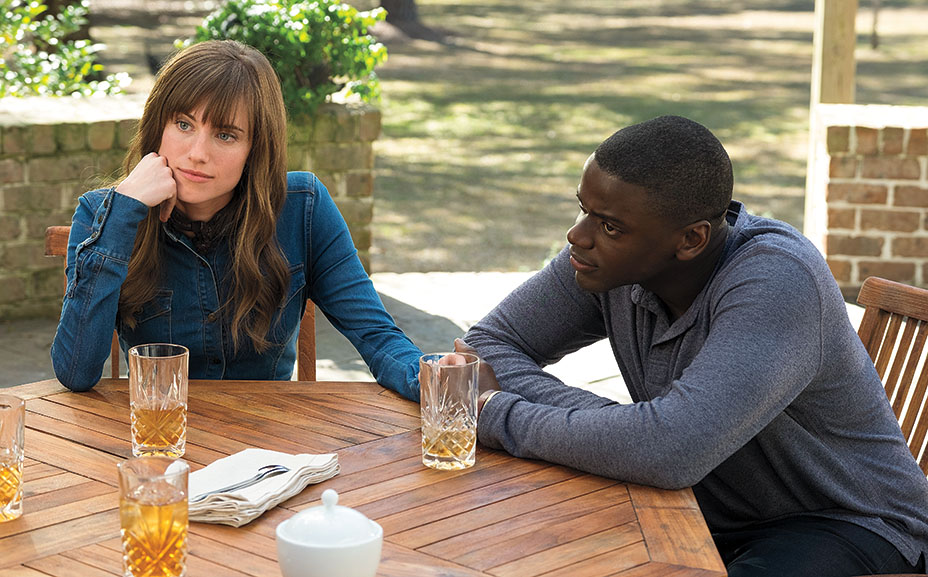 So what message do you have for theater owners at CinemaCon?

I don’t have as much of a message as a thank you for the support. I’m just very honored to be considered for this award. They are the real experts on what an audience is appreciating.

How important is the communal, theatrical experience for a movie like Get Out?

Oh, so important. I think one of the reasons Get Out spoke to the CinemaCon judges is because that experience is the point of the movie in many ways. Let’s say the audience is half black and half white. During the first half of the film, you can tell the two are having slightly different experiences watching it. By the second half, everybody is cheering for the same character, for the black character. It creates a common ground for a discussion about racism.

Would that be lost watching it at home?

There is something transformative if you’re a black person cheering in a theater and turn to see a white person cheering for the same thing you are. We haven’t allowed the black perspective to be the protagonist of a movie like this in a modern sense.

That does happen with movies about slavery, doesn’t it?

Slave movies can be amazing, but it is interesting to me that the industry and this country have found a certain safety in the American slave narrative — I think because these films take place a long time ago, there is a certain protection and we don’t have to face current issues of racism.

Saturday Night Live once courted you because of your killer impersonation of then-President Barack Obama. What happened?

I had to turn it down because of contractual reasons [with MADtv]. That was brutal. But it was also a great lesson for me: During the lowest times, the best things can be born. That’s when I started asking myself questions that led to writing Get Out.

Have you practiced impersonating Donald Trump?

No. I’m sure I’d have a fun time doing it if I did, but I’m happy to not be in sketch comedy right now.

Is your sketch comedy career over?

Yes. I want to focus on writing, directing and producing.

Very few first-time directors enjoy this sort of success at the box office. Elizabeth Banks, who helmed Pitch Perfect 2, was an exception, much like yourself.

She sent me a really nice email congratulating me on Get Out, and she said she loved it.

So are you getting offers to direct?

There is a feeling of opportunity that is truly amazing. I’ve been in Hollywood for 14 years — 14 years of closed doors and the grind. So to feel the energy coming from inside the industry, let alone from the country, is just one of the best feelings. Luckily I have reps who can help me sift through all of the opportunities. But I really want to continue to nurture my own voice. I love writing, so I’m not in any rush. I am a huge fan of Quentin Tarantino, who takes time to figure out what his next movie is.

Oscars: 'Beauty and the Beast' and 'Get Out' Meet the Voters