Scandalous dresses on the Grammys red carpet aren’t what they used to be. It wasn’t deep cleavage or a thigh-high leg slit that had tongues wagging about singer Joy Villa on Sunday night. It was her red, white and blue gown emblazoned with “Make America Great Again” in front, and “Trump” across the train.

It’s a controversial statement coming from an artist in an industry that’s largely in opposition to the new president’s social policies, not to mention from a woman who identifies as bi-racial. 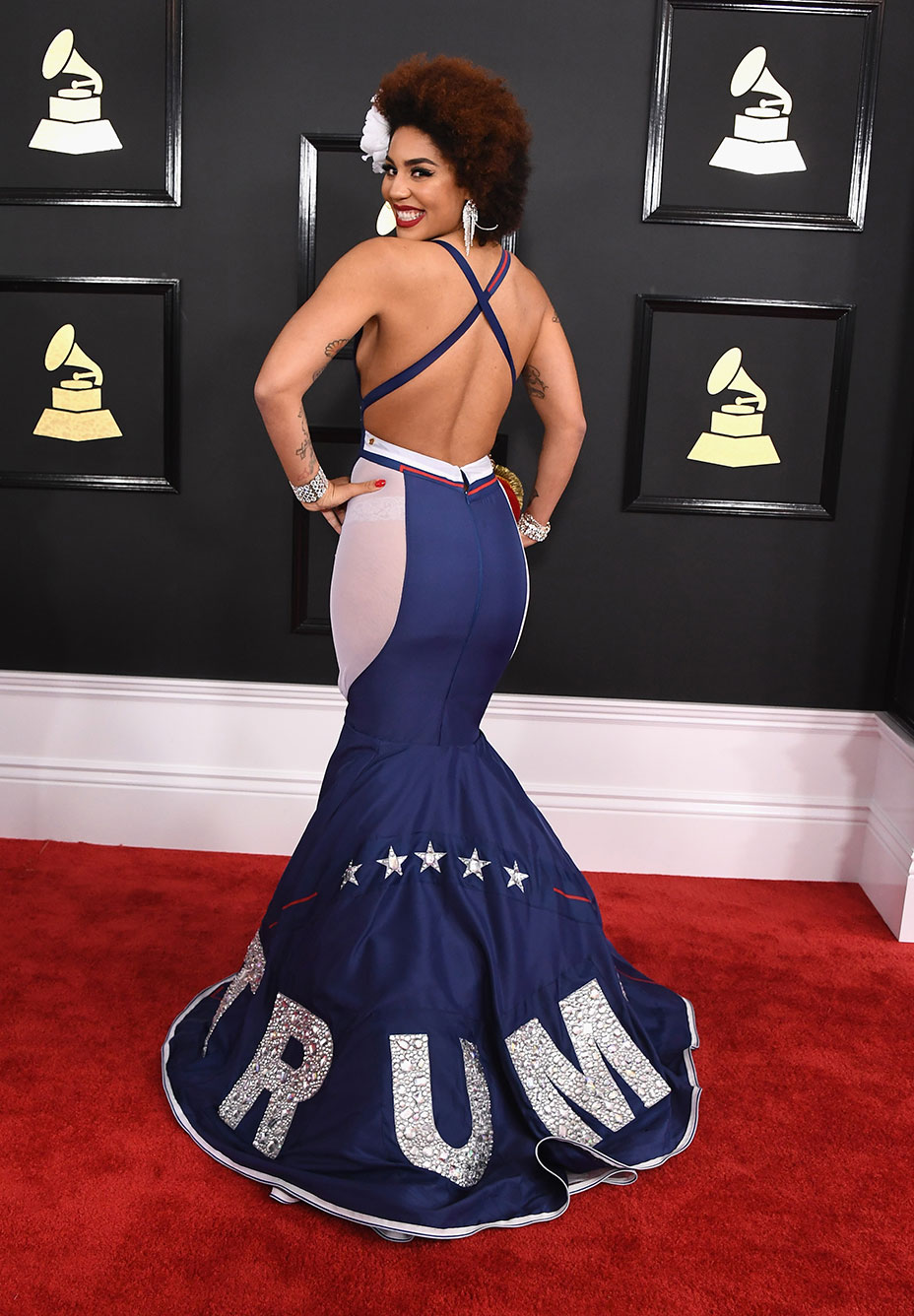 The singer-songwriter, who goes by the name Princess Joy Villa, teased the ensemble on Instagram with a photo of a heart-shaped clutch and a caption stating, “My whole artistic platform is about LOVE. I couldn’t be where I am today without the love and tenderness of those beautiful supporters and friends around me.”

Villa went on to say, ”I hope you enjoy tonight’s #grammyawards2017 and remember to forget your problems and focus on the future! You are infinite and beautiful and no one can stop you but you. So go out and celebrate yourself as a winner no matter what, together with those you adore.” Villa wore a white cape to cover her gown, before making the big reveal on the red carpet.

Villa has a history of wearing polarizing outfits to the Grammys, including last year, when she wore a cage-like ensemble. In 2015, her revealing look consisted of orange construction fencing, designed by Andre Soriano (who also designed the Trump dress).

The designer of the gown, Filipino immigrant Andre Soriano, told The Hollywood Reporter that he is supportive of the new president despite his controversial immigration ban, and that the message of the dress was one of positivity.

“It’s more so about love,” he said of the red, white and blue gown. “We all live on this planet. I’ve never been in the political area. However, it’s just so crazy that people are getting beat up because they voted for Trump, or this and that, someone wants to bomb the White House….I am an American, I moved here from the Philippines and I highly believed in the trueness of what this country can bring. It’s about bringing people together, that’s the message.”

Soriano skirted questions regarding the meat of his political beliefs, but said he is proud American and believes that he is an example of the American Dream. He was first discovered on Rihanna’s Bravo reality show, Styled to Rock, and launched his label in San Diego in 2013. He is naturalized citizen.

As for the inspiration behind the pro-Trump dress, Soriano says, “I heard that somebody wanted to bomb the White House. And then I saw the Women’s March… Joy Villa is all about love with her music. I’m like Joy, We have to make a statement on what is right for our country, of what we believe in, for the constitution.”

Shortly after the show started, Joy Villa took to Twitter to thank her supporters, saying, “Sometimes you just gotta be free to express yourself.”

Sometimes you just gotta be free to express yourself. thank you to all of my supporter… https://t.co/08AGXxG5zy pic.twitter.com/S286YuONhE