Known for making political style statements on the red carpet, singer-songwriter Joy Villa turned up at the 62nd Grammy Awards in Los Angeles wearing a gown in support of President Trump’s 2020 re-election campaign. This is her third showing of support for Trump on the red carpet. 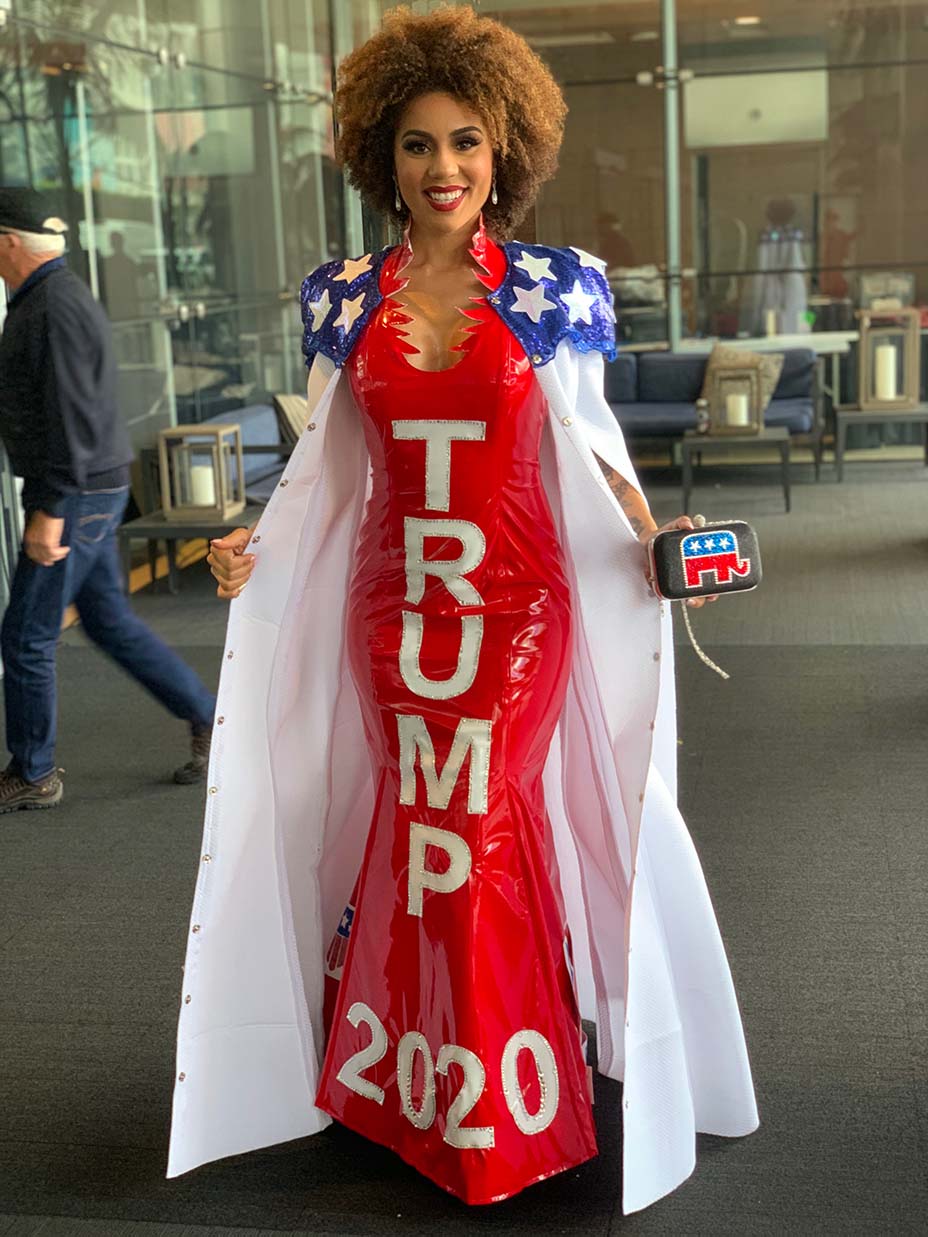 The gown has the phrase “Trump 2020” in white crystal lettering running down the front of the bodice and the words “Impeached and Re-Elected” on the back. Both the gown and Villa’s white coat with cape sleeves, crafted of surplus white mesh sports fabric that a company donated to designers in Portland, according to the musician, were custom-made by Desi Allinger of Desi Designs, as was her red ostrich feather hair accessory.

Allinger tells The Hollywood Reporter: “The collar of Joy’s latex dress was inspired by a neckline on a dress by Alexander McQueen, and the coat is inspired by our first lady [Melania Trump] — I just picture her in this. So yeah, USA!” 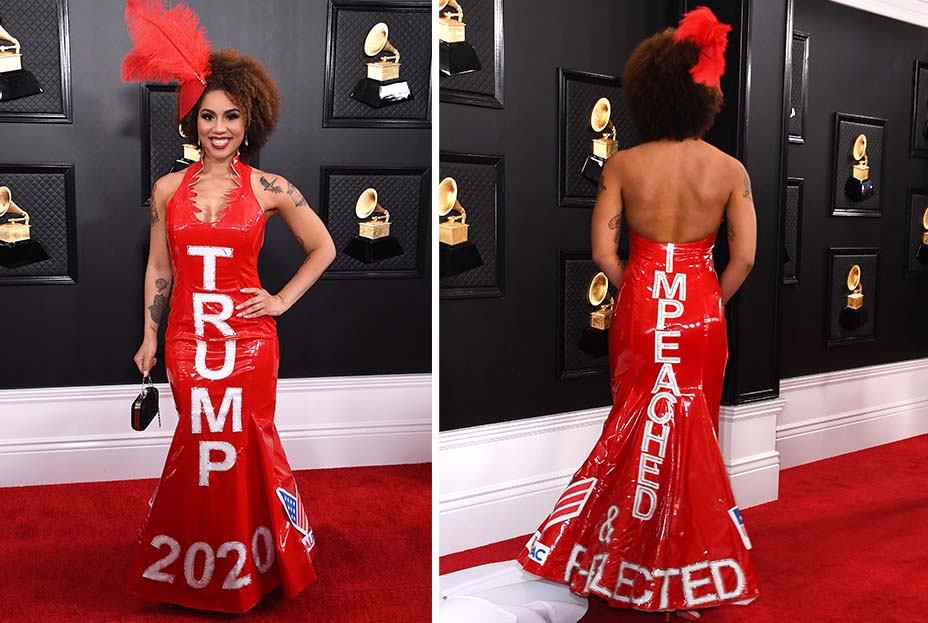 “I feel like Miss America in this; it’s all couture,” Villa told THR before the awards show, adding, “He’s going to be the first president in history to be impeached and re-elected.” She described impeachment as “a total sham,” explaining that the process was “confusing most Americans.”

Asked whether she had shared her fashion plans with Trump in advance of the show, she said, “He’ll be surprised. I just told Ivanka and the White House that I’m going to wear something to be supportive. I don’t let anyone know the message beforehan.”

Created and sent to her by a fan, Villa’s glittery black handbag is embellished with a beaded red, white and blue Republican elephant motif, while her Uplift by Lily pumps are decorated with a patriotic stars and stripes flag pattern.

Villa told THR that the look is a partnership with ViralPAC (as stated on the side of her dress), an organization funding conservative artists to support the re-election of President Trump and conservative candidates in 2020. 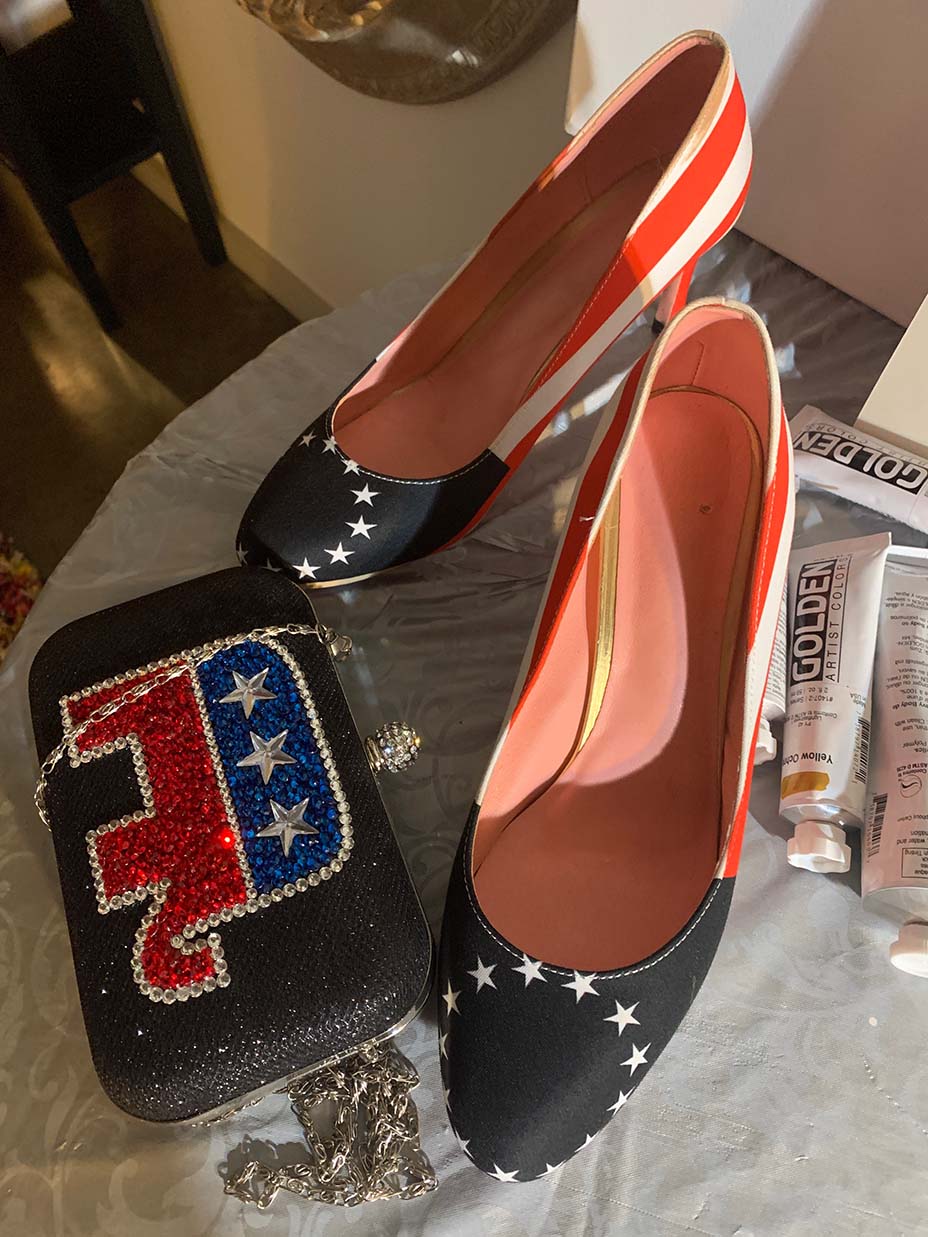 The 33-year-old L.A.-based musician is a member of the Recording Academy. In 2018, she released the album Home Sweet Home, with a single entitled “Make America Great Again!”; last fall, she dropped her latest single, “Freedom (Fight for It),” with Flint Bedrock that is “all about stopping censorship of conservatives,” says Villa.

“I’m working on new music, because I’ve got a movie, The Contrast [directed by Presley Paras] coming out later this year,” said Villa, adding that the film will be shopped to streaming services. “We have a mixed cast of different ethnicities, multiethnic, who are also multi-political. And I am also executive producer. We had multiple people turn down a co-starring role, with paid money, because they did not want to work with me.”

Villa says that she is planning to move back into acting after landing some bit parts before turning to her music career; she has another role in Thomas R. Bond II’s Brigantia. Her father, Joseph Villa, was an actor as a child and later became a Christian minister.

Sunday marks Villa’s sixth appearance at the Grammys. In 2015, she wore a dress created from recycled orange construction fencing, followed by a black skeletal-inspired look in 2016 to reflect the feeling of a single she had released entitled “Empty.” 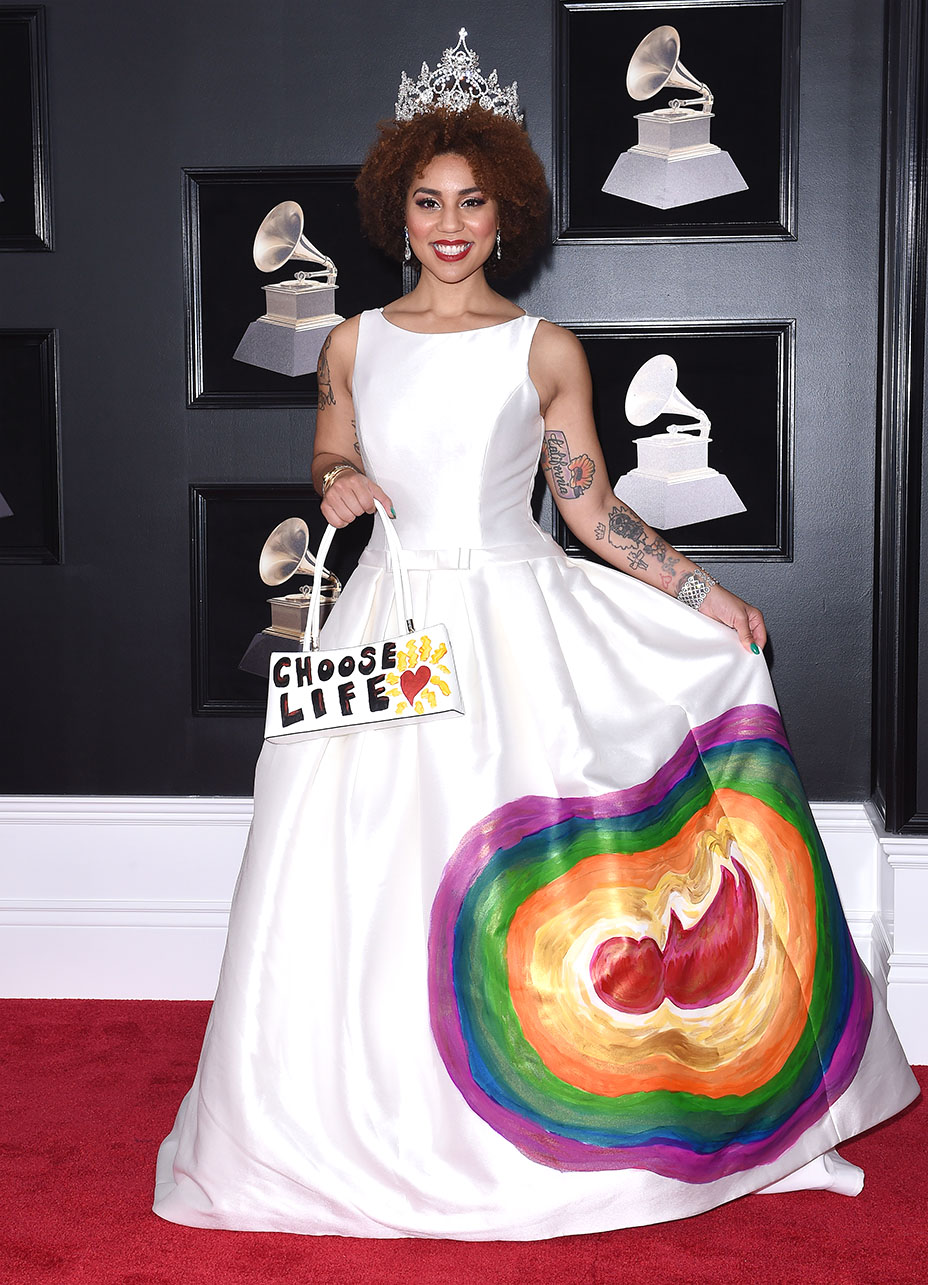 Villa’s 2017 Grammys gown (designed by immigrant Andre Soriano) featured Trump’s presidential campaign slogan, “Make America Great Again,” on the front and “Trump” on the train; then she went for a pro-life theme in 2018 in a white Pronovias bridal gown that she hand-painted with an image of a baby in a uterus and the phrase, “Choose Life.” 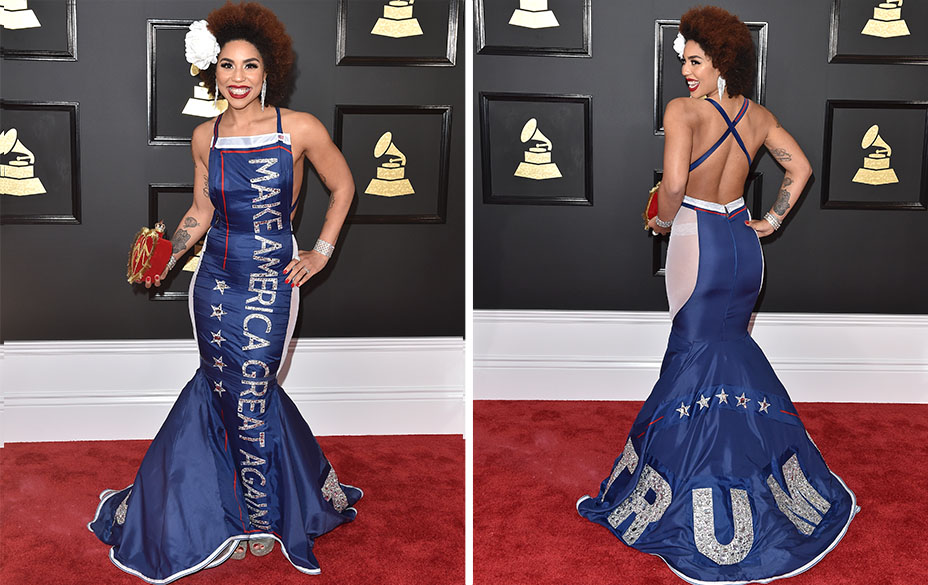 At the 61st Grammy Awards last year, Villa wore a silver dress (also by Desi Designs) embellished with a brick pattern and “Build the Wall” spelled out in red lettering inspired by Pink Floyd’s 1979 album The Wall as well as barbed wire on the shoulders; she accessorized with a spiky headpiece and a red handbag that read, “Make America Great Again.” 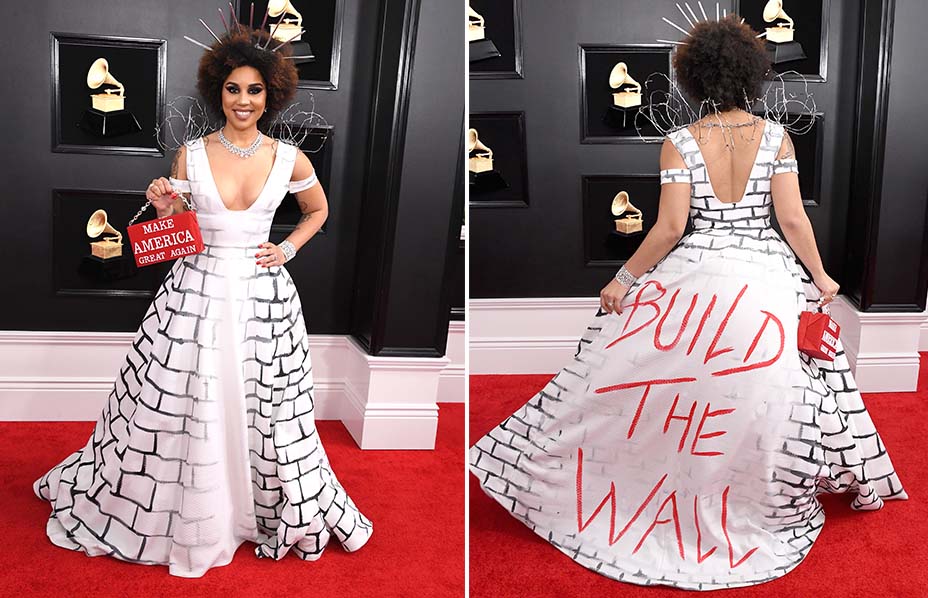 On two other red carpets, she also wore her pro-life messaging on her sleeve. In April 2019, at the L.A. premiere for the film Unplanned, the musician donned a hot pink latex gown that read “F*ck Planned Parenthood” on the bodice and “Unplanned” across the ruffled train. And at the 2019 Daytime Emmy Awards in Pasadena, Villa stepped out in another Desi Designs gown that read “Pro-Life Is Pro-Woman” on the back.