Singer Joy Villa arrived at the 2018 Grammy Awards in a provocative pro-life ensemble featuring a graphic image of a fetus.

The white Pronovias bridal gown, which Villa paired with an oversize tiara, was emblazoned with a red fetus encircled by rainbow hues that Villa hand-painted herself. Her handbag was inscribed with the words, “Choose Life.” 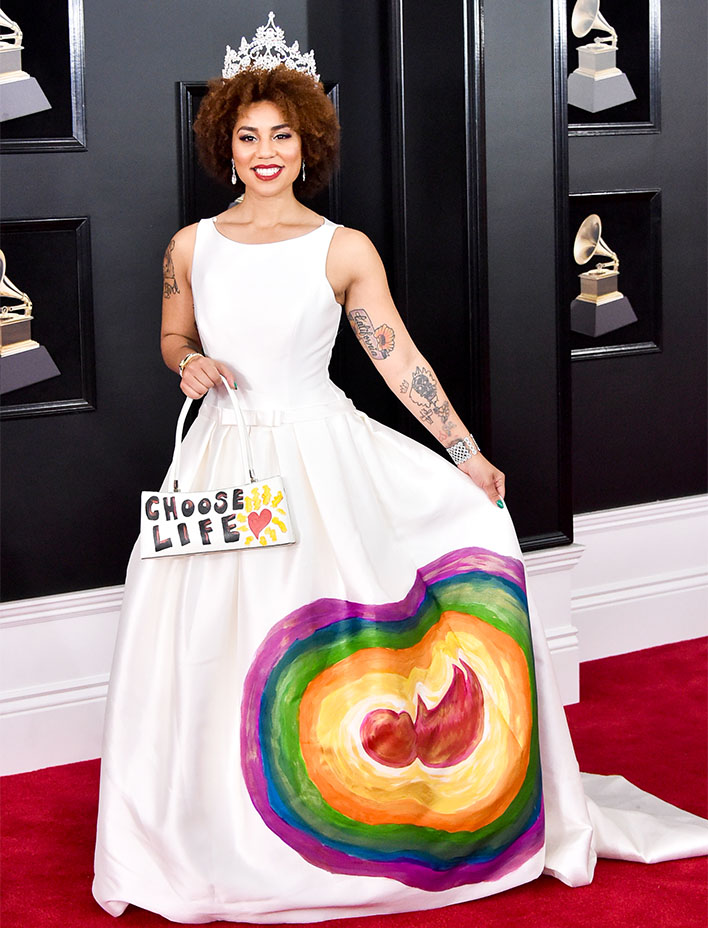 According to her tweet, Villa’s gown was purchased from Bridal Garden, a nonprofit bridal shop that donates proceeds to underprivileged children in Brooklyn’s Bedford-Stuyvesant neighborhood.

https://t.co/c0FzKmXH66 #grammys #chooselife @Joy_Villa hand-painted by #JoyVilla, on a @pronovias dress from @thebridalgarden, a non-profit with all proceeds going to @BrooklynCharter in Bedford-Stuyvesant for talented, under-privileged mostly minority children

Designer of Pro-Trump Grammys Dress Is an Immigrant

“I’m a pro-life woman,” she told Fox News. “This year I chose to make a statement on the red carpet like I always do.”

As for how she feels about the president’s first year in office, she said, “I love what he is doing; unemployment is down … I am totally for President Trump, and it’s only been one year. I can’t wait for the next seven years!”

While making a political statement on the Grammys red carpet isn’t unheard of, the explicit image felt particularly insensitive.

Villa did not acknowledge if her white gown was a nod to the Time’s Up movement, which supports women in the fight against sexual harassment. In late December, Villa filed a sexual assault complaint against Trump’s former campaign manager Corey Lewandowski.