In the futuristic America of Judge Dredd, it’s the end of the world as we know it once again — but “End of Days,” the new serial beginning in this week’s issue of the long-running 2000 AD anthology, probably isn’t what fans are expecting from acclaimed writer Rob Williams and artists Colin McNeil and Henry Flint.

Williams is no stranger to writing big Dredd stories; in recent years, he’s written about rogue factions inside the fascistic Justice Department that Dredd belongs to in the “The Small House” storyline, as well as an uprising from imprisoned former police angry about the conditions of their incarceration, and the consequences that follow (2014’s “Titan” and 2015’s “Enceladus storylines, respectively).

“End of Days,” however, is something different — an intentional throwback to the earlier days of the Judge Dredd strip, with an external threat requiring an epic response teaming Dredd with some surprising allies for the first time. More than an exercise in nostalgia, it’s also the perfect jumping-on point for those curious about the iconic British comic book character.

The Hollywood Reporter talked to Williams about “End of Days,” and also the unexpected co-star of the storyline.

It feels like you’ve been working out particular threads towards their conclusions, with stories like “Enceladus” and “The Small House” wrapping up long-standing plots — and killing off characters — in recent years. “End of Days” seems, on first blush, like something different… a new beginning of sorts. Are you doing something like that here, in your eyes?

Yes. “The Small House” sort of tied up a lot of dangling plot threads from my work on Dredd and [earlier Dredd spin-off series] Low Life. “End of Days” is, mainly — there’s a big caveat, however — an entry-level high concept Judge Dredd epic: The world’s under serious threat and Dredd has to put a team together to head off and try and catch and kill the culprits to save the world. It’s kind of [classic 1980s storyline] “Judge Child”-inspired.

I wanted to write the type of fun “mission” Dredd epic that I loved as a kid. The big caveat is the appearance of a character from one of my other 2000 AD stories who comes along for the ride, a character who doesn’t really exist in the Dreddverse. But I like to think we explain that pretty economically. You don’t need to have read a lot of past stories to enjoy this one. 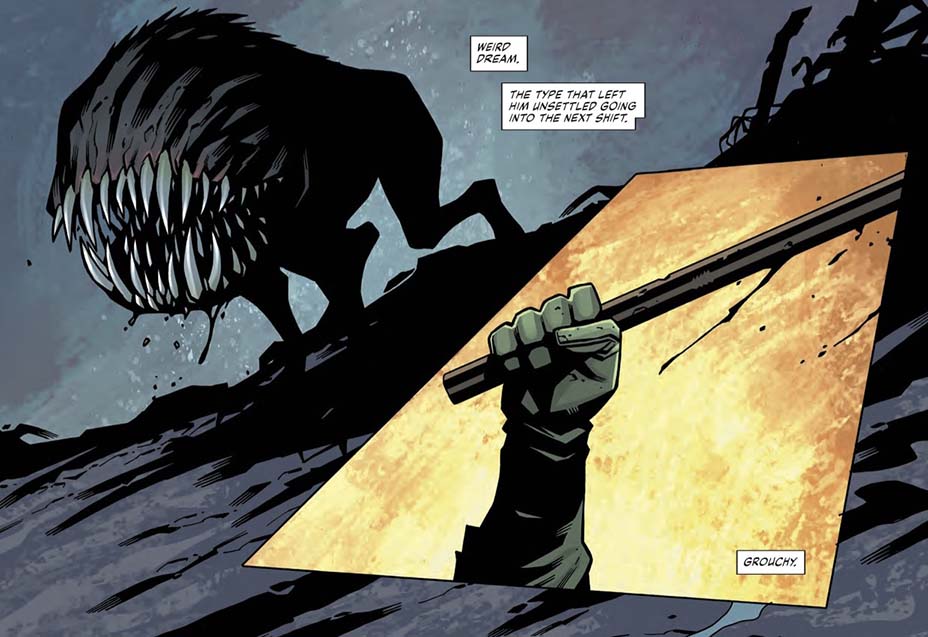 You mentioned the character from another of your 2000 AD series — what was the thinking behind bringing in Ichabod Azrael into this storyline? Sure, there’s a tradition of bringing in characters from other 2000 AD strips to team with Dredd that makes things feel more epic, but this one was very unexpected — and all the more exciting for that, even as logical as it seems in retrospect.

It appealed to me because it makes no logical sense whatsoever. It’s a complete wild card “end of world” entry into Dredd’s world. And just the fact that a lone rider comes to the city one night, carrying the severed head of an angel in a sack, and the decapitated head of the angel then warns Dredd and Anderson that their world is about to end. That struck me as a real WTF story setup.

Ichabod was the most notorious killer of the Old West, so he’s over 300 years old in Dredd’s world. Plus, in his own story, he was killed, decided he wasn’t willing to die, and so murdered his way across Purgatory so he could return to the living world — that’s all apocalyptic prime material. Ichabod ended up besting the Devil in a gunfight and he achieved a form of peace with his family when last we saw him. His story was done. But the idea of him riding on Dredd’s city with a terrible warning while the moon turns red in the sky — that was imagery that this whole story sort of rolled out of.

There’s something wonderfully old-school mega-epic about this set-up: Dredd against the Four Horsemen of the Apocalypse is the kind of immediately understandable concept that feels like something Dredd co-creator and head writer John Wagner would’ve come up with in the early days of the character. Was this the intent?

Totally. I sort of felt I’d done Dredd as a contemporary political commentary with “The Small House.” When I started reading 2000 AD, I’d hunt down the Titan and Eagle reprints of the old Dredd epics like “The Cursed Earth” and “The Judge Child.” “City of the Damned” ran in 2000 AD just when I started getting the comic on a weekly basis, and that was the most awesome thing to 12-year-old me, with the best Steve Dillon art. These stories were Dredd heading out “on the road,” and going through hell on a mission to save the city. This is very much a Dreddworld road trip in that vein.

In past big stories, you’ve mixed the action beats, or external conflict, at least, with something approaching an internal exploration of Dredd, as much as the character allows, at least. Is that something you’re going to continue here? There’s a spiritual element to the Four Horsemen that I can imagine Dredd would have trouble with…

Dredd doesn’t really do the spiritual. There’s a line in one of my past Dredds where he considers the supernatural and reasons it with “He’s put his fist through the supernatural,” so, that’s fine — this is just another couple of creeps need stopping.

He’s faced the supernatural in stories like “City of the Damned,” “The Dark Judges,” “The Haunting Of Sector House 13.” That’s all an established part of Dredd’s world. Plus you have [Judge] Anderson, who’s a big part of this story. Psi-Division deals with this stuff all the time. Dredd doesn’t ponder such things — these are criminals. They need to be taken down.

But yes, there’s always a granular exploration of Dredd in big stories like this. For me, with “End of Days,” it was his age, his mortality. He’s pretty much kept a dead world alive via strength of will alone. But he’s still human. Just how much can he take? 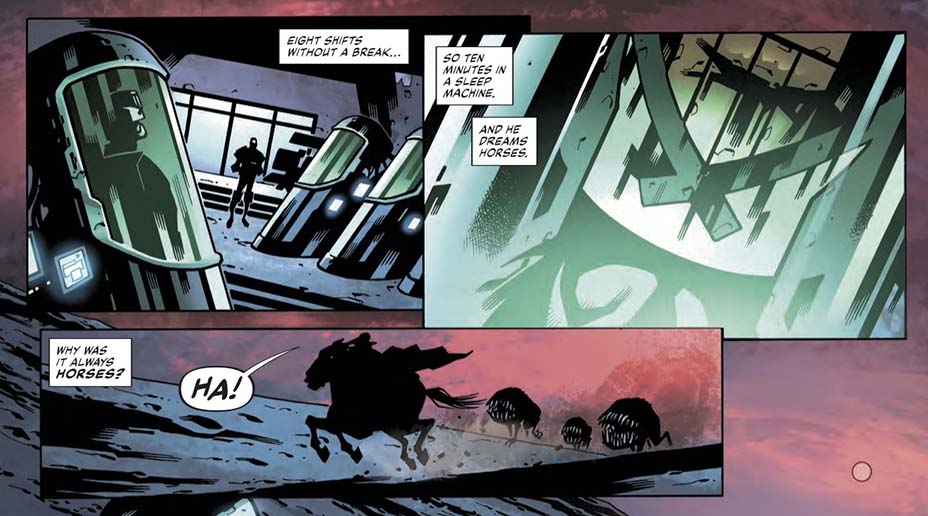 ”End of Days,” at 15 continuous episodes, is the longest Dredd serial you’ve written, and it’s also the first that’s split between two artists, Colin McNeil and Henry Flint. Is this a practical, “it’s a long story,” thing, or is there a thematic reason for working with two artists?

Well, both of them are up there in the Dredd pantheon, so splitting the story between the two of them sort of gives “End of Days” some gravitas, I guess.

Henry, I’ve worked with a bunch, and he’s a genius. Henry can draw anything I write and make it sing, whether it’s outre visuals or emotional character performances. Colin, I’ve never worked with before, but he’s done a beautiful job here. And Colin’s drawn some of the best Dredds of all time. “America” [a 1990 serial centering around the pro-democracy movement in the fascistic Mega-City One setting of Dredd] springs immediately to mind.

This is a long, 15-part story. Dredd stories when I was a kid usually used multiple artists, especially the mega-epics. And that’s what we’re reaching for here. 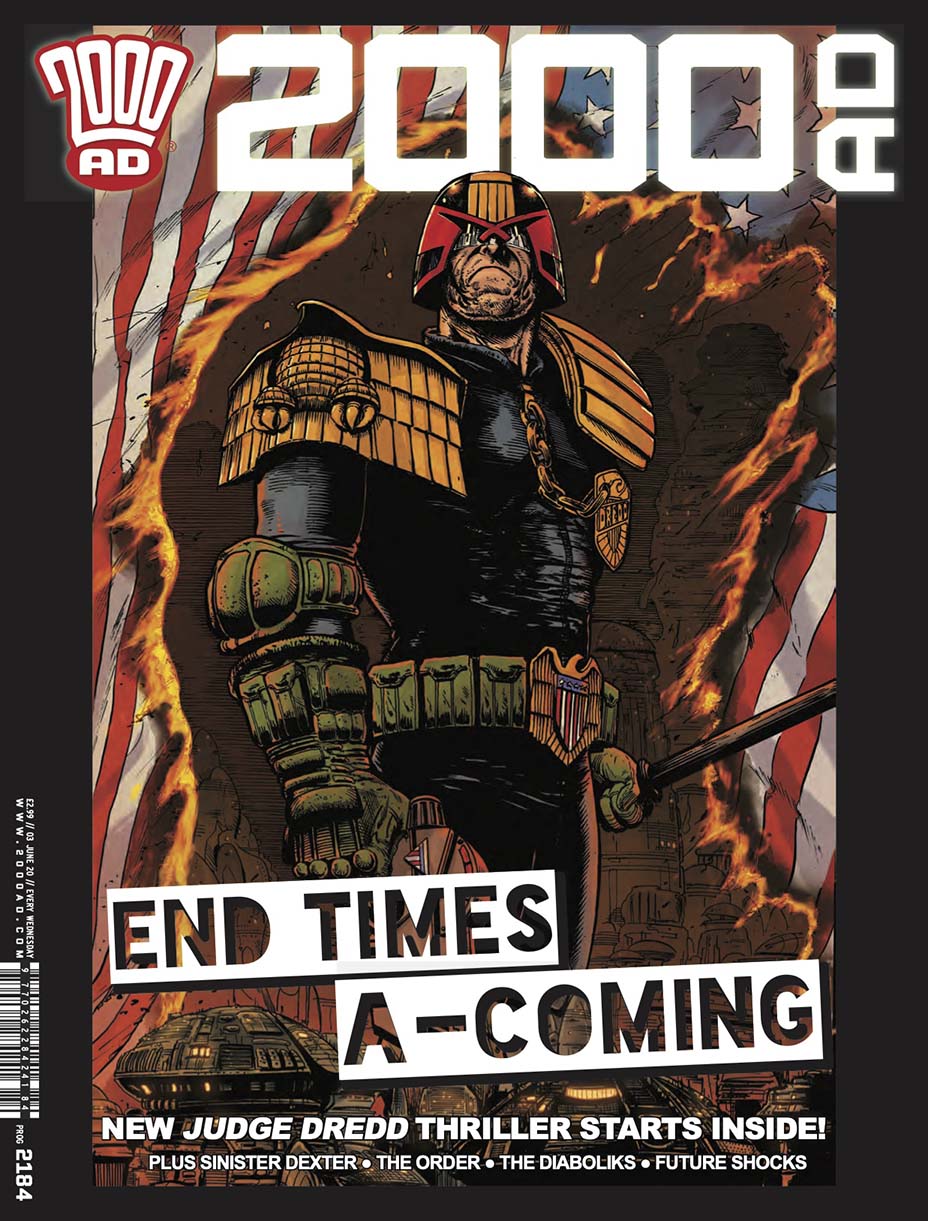