I confess that what little I know about corporate raiders I learned mostly from Pretty Woman. In that 1990 film, Richard Gere played a finance vulture, swooping in on a vulnerable family-owned shipbuilding company with the intention of buying it, stripping it down and breaking it up to sell off the parts for a massive profit. As we all recall, he’s humanized when a Hollywood Boulevard prostitute with a moral compass and a radiant smile, played by Julia Roberts, shows him the beauty of compassionate intervention, magically transforming his impeccably tailored suits into shining armor.

Ayad Akhtar tells a more detailed version of that story and its long-range reverberations, minus the ethical hooker and the fairy-tale ending, in his modern-day Shakespearean history play, Junk. To stick with the movie references, the drama evokes Wall Street and Other People’s Money (the latter based on a play) while surveying the climate that paved the way for Margin Call and The Big Short. Which is to say it’s not terribly new, even if it remains relevant. We’re back in “greed is good” territory, though the central character played by Steven Pasquale, a fictionalized, disclaimer-protected version of Michael Milken named Robert Merkin, has more complex shadings than Gordon Gekko.

Directed by Doug Hughes with a solid cast of 23 and a tireless foot on the accelerator, this is the kind of large-canvas, intelligent drama that Lincoln Center Theater does impeccably, notably so last season with Oslo. The difference, however, is that J.T. Rogers’ Tony-winning play had richly individualized characters with incisively drawn cultural distinctions to flesh out the dense detail of its political history lesson. Junk, by contrast, is populated with aggressive arbitrageurs, inside traders and number-crunching sharks, all swimming more or less in the same pool.

Akhtar, who won a Pulitzer in 2013 for his combustible reflection on faith and racial identity, Disgraced, is a perceptive writer with an ear for pithy dialogue, so he keeps it engrossing, which in itself is quite remarkable. As Merkin points out near the end of the play, the language of the financial system is designed to make the average layperson’s eyes glaze over as soon as anyone starts trying to explain it. The playwright does an efficient job of outlining how a junk bond trader like Merkin can make more money in a year than any American since Al Capone. What he can’t do is make us care about these characters, which somewhat limits Junk to the sphere of glossy infotainment, a dramatized origin-story lecture pinpointing the transitional moment when money became the most powerful religion in America. 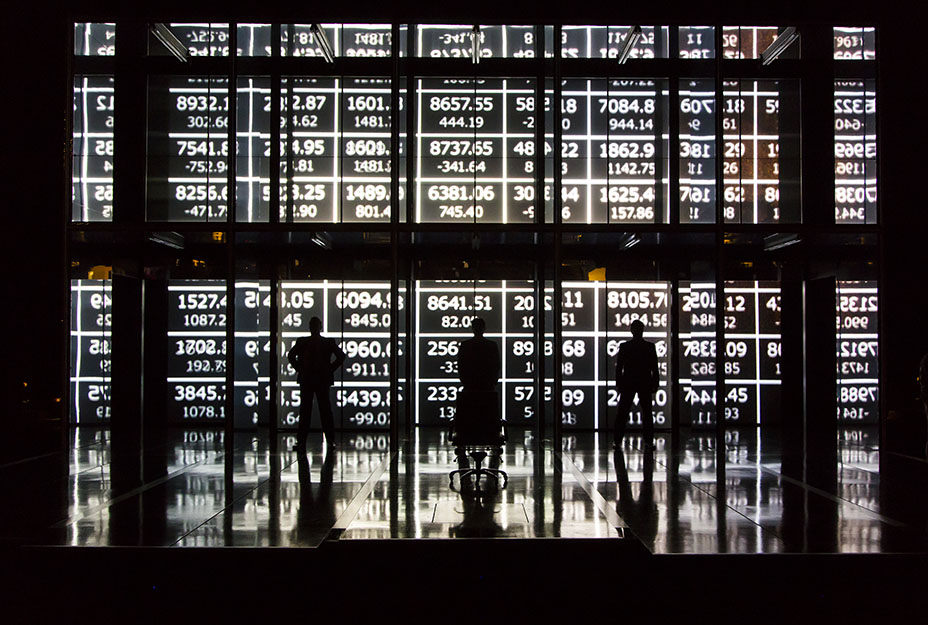 The staging is a marvel of fluidity. John Lee Beatty’s minimalist set is a high-gloss black floor, giving the illusion of marble, with a two-level rear-wall playing space compartmentalized by bars of Ben Stanton’s lighting. Hughes punctuates the short scenes with dynamic shifts in that lighting and bursts of Mark Bennett’s pensive music, taking us from conference rooms to bedrooms to secret meeting points in a flash.

Despite being press-shy, Beverly Hills investment banker Merkin is hot off a recent Time cover feature. He and his lawyer Raul Rivera (Matthew Saldivar) and their voracious corporate-raider client Izzy Peterman (Matthew Rauch) like to toss around words like “vision,” “choice,” “courage” and “reform” to ennoble what they’re doing. But their game really is to scour the markets like birds of prey looking for weak targets on which to feed. Izzy has zero knowledge of what the diverse companies he acquires actually make, and even less interest. They simply represent value. In what is described as “the deal that changes all the rules,” Merkin is going after Everson Steel and United by taking out a loan against the troubled manufacturing giant’s debts and then using that cash to buy up a stock majority.

Chief executive Thomas Everson Jr. (Rick Holmes) didn’t even know how at-risk his Pennsylvania steel company was until the barbarians were at the gates. Flanked by his legal and finance advisors (Henry Stram and Ito Aghayere), Tom reaches out for a lifeline from private equity player Leo Tressler (Michael Siberry), a crusty veteran of white-shoe firms who has nothing but contempt for “junk” traders, a word he believes says plenty. Leo’s billions help him talk his way into bed with savvy finance reporter Judy Chen (Teresa Avia Lim), who is researching a book on the new economic titans. Her direct-address reflections frame the action.

Akhtar weaves in plenty of behind-the-scenes intrigue — a strategically placed mole at Everson is passing information to Merkin’s crew; Tom is cooking the books to make Everson appear more financially robust; Merkin is exchanging mutually profitable information with scuzzy arbitrageur Boris Pronsky (Joey Slotnick); a U.S. Attorney with New York mayoral ambitions (Charlie Semine) is closing in on an insider-trading network with codenames lifted from Moby Dick; and Judy is onto Robert’s undeclared stakes in the companies he’s helping his clients acquire. 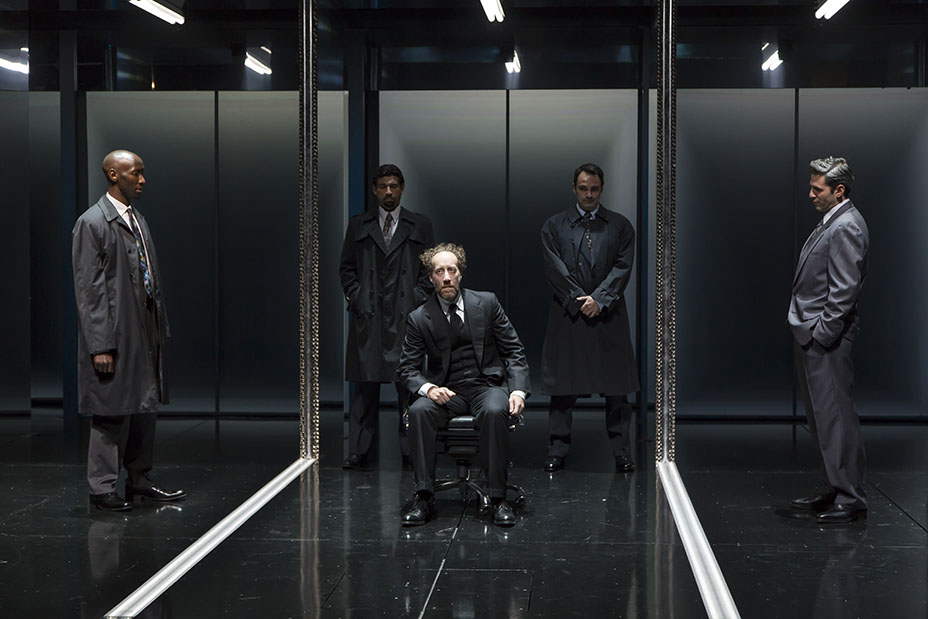 Then there’s Robert’s wife Amy (Miriam Silverman), another finance wizard. She initially comes off like a vanilla Lady Macbeth, egging her husband on with phrases like “survival of the fittest” or “creative destruction” while he frets about being branded a “job killer.” But Amy gets increasingly nervous about his dealings with Boris, particularly once Robert lands in the legal crosshairs.

The playwright is too gifted a writer to reduce his characters to simplistic good guys and bad guys, particularly since there are none of the former — everyone here is morally compromised one way or another, all of them infected by greed. Casting the wholesomely handsome Pasquale as Merkin allows for some ambiguity in a pragmatic opportunist with no time for “Norman Rockwell sentimentality” in finance and a disregard for laws and regulations in securities. Akhtar’s interest in race as a theme is present in Merkin’s belief that anti-Semitism has kept doors closed to men like him and Izzy. He also claims that the lament for the decline in American manufacturing is partly driven by xenophobic panic about foreign inroads into the crumbling cornerstones of domestic industry. Few will miss the contemporary relevance of that latter thread, given its prominence in Donald Trump’s presidential campaign.

Junk isn’t lacking in food for thought, but as drama it’s a little dry and unrelentingly talky to sustain a 140-minute running time. Akhtar’s terrific 2014 play, The Invisible Hand, also revolved around an American investment banker, in that case being held hostage by Islamic militants. More intimate in scale than Junk, it deftly deepened the central figure while slyly folding a crash course in global trading into an edge-of-the-seat thriller.

There’s less of that suspense or human interest here, but rather a sour inevitability as the action hurtles forward, presaging the deregulated climate that yielded the subprime mortgage crisis and the economic crash of 2007 — and beyond that, a barely chastened finance sector and a White House administration transparently driven by wealth. The writing is brutal, clever, often witty, and the production sharp as a tack. But many will be left wondering if they really needed this dispiriting recap of the shift toward making money off money while building nothing but debt.