The development comes a day after the actor was charged with federal disorderly conduct by the Cook County State’s Attorney’s Office following news that he was considered a suspect for filing a false police report about an alleged attack against him on Jan. 29.

“Jussie Smollett is under arrest and in custody of detectives,” Chicago Police spokesman Anthony Guglielmi tweeted early on Thursday. “At 9am at #ChicagoPolice Headquarters, Supt Eddie Johnson, Commander of Area Central Detectives Edward Wodnicki will brief reporters on the investigation prior to the defendants appearance in court.”

During the press briefing, Chicago Police Superintendent Eddie Johnson called the attack a “hoax” and a “shameful… publicity stunt.” He said the stunt was orchestrated because the Empire star was “dissatisfied with his salary.”

Johnson said Smollett first attempted to gain attention by sending a false racist letter to his place of work. “When that didn’t work, he paid $3,500 to stage this attack and drag Chicago’s reputation through the mud in the process,” he said. Police officials said they now have the check, which was made out to brothers Olabinjo and Abimbola Osundairo, who are now witnesses after confessing to the entirety of the plot while in custody.

Since the brothers had on gloves during the incident, Johnson said the scratches and bruising seen on Smollett’s face were likely self-inflicted.

“I just wish the families of gun violence got this much attention,” said Johnson of the media circus created by Smollett. He chided the actor for “choreographing” a story that received national attention for weeks, with even presidential candidates weighing in. “This announcement today recognizes that Empire actor Jussie Smollett took advantage of the pain and anger of racism to promote his career.”

Johnson, who is black, said with despair, “I’m left hanging my head and asking why? Why would anyone, especially an African-American man, use the symbolism of a noose to make false accusations? How could someone look at the hatred associated with that symbol and see an opportunity to manipulate that symbol to further his profile?”

Jussie Smollett Hits Back at Doubters as He Details Brutal Attack

Wodnicki recounted the timeline of events during the briefing, thanking the FBI and the Chicago Police for their detective work, which included going through hours of video evidence. “The way that they carried this out, there was never a thought in their mind that we would be able to track them down,” said Johnson, reiterating that the stunt was financially motivated.

Johnson also called out the media for its nonstop coverage and expressed concern over the impact Smollett’s stunt would have on hate crimes in the future. “We will investigate with the same amount of vigor, [but] my concern is now hate crimes will be met with a level of skepticism that previously didn’t happen,” he said. “I only hope the truth about what happened receives the same amount of attention the hoax did.”

When asked what he would like to see from Smollett, Johnson said “absolute justice would be an apology to this city that he smeared, admitting what he did and then be man enough to offer what he should offer up in terms of resources put into this.”

Smollett has yet to give a statement since the arrest. When reached by The Hollywood Reporter on Thursday, a rep for the actor declined to comment.

At Smollett’s first court appearance later in the day at Chicago’s Cook County Criminal Court, a judge set his bail for $100,000. The 36-year-old actor, who also must surrender his passport, posted bail and later returned to the Empire set. 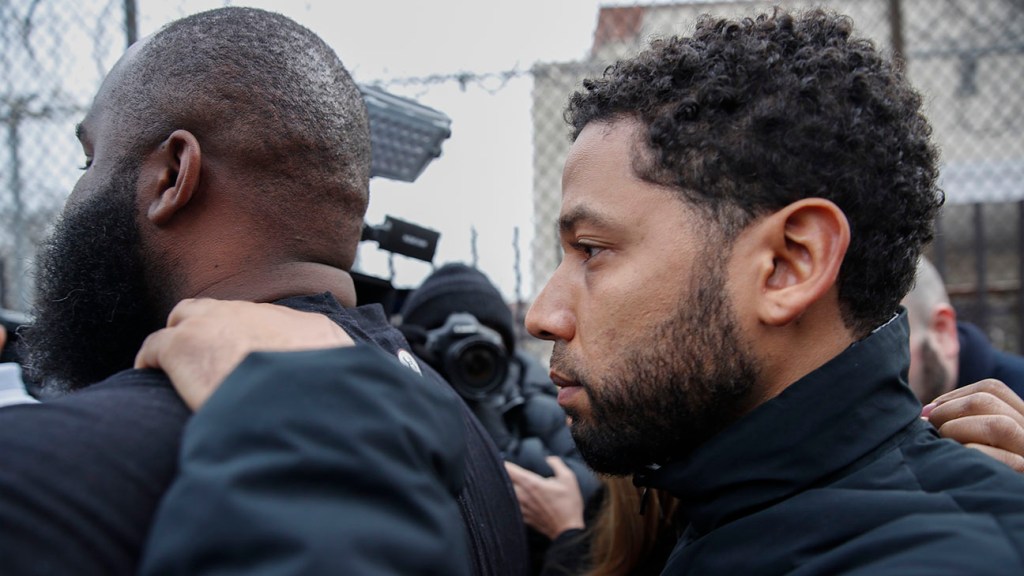 The actor said little other than giving his name at the hearing, according to the Associated Press. When his attorney requested Smollett be released on his own recognizance, Cook County Judge John Fitzgerald Lyke Jr., who is black, said that would be inappropriate and that he was bothered by the allegations in Smollett’s story of a rope being placed around his neck.

The Class 4 felony charge carries a potential sentence of one to three years in prison and up to $25,000 in fines. According to the relevant section of the Illinois statute, such a charge occurs when a person makes a report of a crime to a police officer while knowing that the information isn’t true, doesn’t have the “reasonable grounds necessary” to believe that it will contribute to the public’s safety or calls 911 with a “false alarm or complaint.”

On Wednesday, Fox Entertainment and 20th Century Fox Television had declined to comment on the new classification. After the briefing on Thursday, the network and studio said they were “evaluating” and “considering” their options about Smollett’s future on Empire. “We understand the seriousness of this matter, and we respect the legal process. We are evaluating the situation, and we are considering our options,” read the joint statement.

Smollett’s lawyers had said in a statement: “Like any other citizen, Mr. Smollett enjoys the presumption of innocence, particularly when there has been an investigation like this one, where information, both true and false, has been repeatedly leaked. Given these circumstances, we intend to conduct a thorough investigation and to mount an aggressive defense.”

Shortly after the briefing, President Trump tweeted directly at the actor, focusing on the part of Smollett’s story where he said his alleged attackers shouted the pro-Trump phrase “MAGA country” during the attack.

“.@JussieSmollett – what about MAGA and the tens of millions of people you insulted with your racist and dangerous comments!? #MAGA,” wrote the president.

Smollett told police when he first reported the incident that his attackers yelled pro-“Make America Great Again” (MAGA) comments, such as declaring Chicago “MAGA country,” along with racist and homophobic language before and during the beating. According to the police report, a chemical substance was poured on Smollett’s face and a rope was placed around his neck.

Smollett, who is black and gay and who plays the gay musician Jamal Lyon on the Fox drama, said during his Good Morning America interview with Robin Roberts that he believed he was the victim of a homophobic and racially motivated assault.

In a statement released late Thursday, GLAAD and online racial justice organization Color of Change, which strongly supported Smollett after the reports he’d been attacked in a possible hate crime, said that they hoped to keep the focus on those who are victims of such violence.

“As we learn more details about Jussie’s arrest, we remain focused on the urgent fight against the very real issues of racism, homophobia, and hate violence,” the groups said in their statement. “FBI data shows that hate crimes are on the rise nationwide and that fact cannot get lost in the discussion around Jussie’s arrest. While Jussie’s situation is troubling and concerning, anyone who is a victim of hate violence should never be hesitant to speak out and share their stories.”

4:15 p.m. Updated to include GLAAD and Color of Change’s statement.