DC Entertainment’s Justice League comic book series continues with its sixth issue, which hit stores Wednesday, and the stakes certainly seem high: Superman and Martian Manhunter — controlled by Lex Luthor and the Joker, respectively — come into contact with an alien artifact of unknown power, while Umbrax threatens to turn Earth into a living planet of evil, with humanity beholden to their worst impulses.

But, as writer Scott Snyder told Heat Vision, there’s something even larger hidden underneath the science fiction concepts: a story about the struggle between the desire to build a better, more diverse world and the temptation to be tribal and surrender to our fears and bigotry. (Plus, of course, the chance to revisit the Hall of Justice and Legion of Doom.)

Justice League is an ambitious comic. It feels like you’re doing a lot just in the issues that have already appeared.

It honestly might be my favorite thing I’ve done, DC-wise. I say that a lot, but genuinely, for me, this book is the golden ring. When I was a kid, Justice League was the book — “If I one day get to do this, I can one day wander off and become a Force Ghost” or whatever. I mean, Batman is my favorite character, but this book, for me, represented the center, the heart and soul, the driving force — the place where the DCU is reflected and built.

I was planning on it since the beginning of [last year’s miniseries] Metal; I knew [the Justice League book] was opening up, and I spoke to [former Justice League writer] Christopher Priest about his plans and how it would fit in. It’s not something I take lightly; it’s not like, “I’ll do that. What can I write?” It was very much, when the Source Wall breaks [at the end of] Metal, that’s the beginning of Justice League, because Justice League is about that moment in time when there’s nothing to stop the death of the multiverse.

Pretty soon, this winter, they’ll discover that there’s no way to repair that crack in the Source Wall — I totally spoiled this thing in winter, but whatever — and they find a design, this hidden design, through the Totality that they believe is a map, a way to evolve the multiverse through these quests to make it what it was supposed to grow into, to change it into this kind of divine design. And if it becomes that, maybe it’ll stop flying toward this incredible void that’s going to recycle it.

But Lex Luthor, he’s like, “Why should we want to do that? I want to turn it into a weapon. That’s what it was meant to be! When you go back and look at the history of the multiverse, this whole thing about evolving into something aspirational, that’s not in our DNA! Let’s turn this into a weapon and crash it into this Valhalla and destroy everything and everybody.”

It’s total comic book lunacy, and it’s packed with ideas and mysteries and mythological expansions, but it’s actually a very intimate story. The first arc, I wanted to be explosively robust so you can see everything we’re dealing with and see the scope, but as it goes forward, you’ll see, it’s a very streamlined story: the Justice League starts to lose, the Legion of Doom starts to win, unlocking these different forces, and should Luthor unlock this thing, he will turn us into a machine of doom rocketing through the sky. It’s absolutely bombastic — Batman and Lex Luthor fighting in Superman’s brain! — but also about a moment in time when we tend to turn inward, go down into our own foxholes in the face of tremendous challenges.

Luthor would look at that and say, “Good, be selfish. Obey that nature.” Human nature, he believes, is small and predatory and tribal. He saw the future — you saw in issue five, he did see the future, and he came back and decided: “We are meant to be these villains. Embrace your inner villain. Be your best self!”

So, on the one hand, it’s a book that has this crazy nonstop insanity, but on the other, it’s about the heroes saying, “Look, he might be right. The world might be that dark. It may be unforgiving, but justice is about imposing a system of ideals on those things and saying, “When you’re evil, you get punished. We need to be better than our own nature.”

These stories just keep getting bigger. Metal was bigger in scale than your Batman work, and then Justice League: No Justice was bigger than that, intergalactic in scope, and now this is just “all of optimism versus all of nihilism.”

It is! That’s what it is! [Laughs.] I wanted to go into this one aware that this is my tenth year coming up at DC Comics. I’ve written so many of the characters I’ve dreamed of writing. I want to go back and focus on creator-owned work at Vertigo — American Vampire is coming back — so I want this to be my opus.

We have a two year plan for Justice League. I began in June, and then next June, things really start to ramp up — [the upcoming miniseries] The Batman Who Laughs; what we’re doing in Justice League Odyssey; Justice League Dark — the architecture of that stuff really comes together in ways that will really explode. Right now, all these stories look very autonomous, but by winter, by spring, you’ll begin to see what we’re building.

You could feel that already in No Justice; it was clear that this was building something.

How much planning went into this uber-storyline that connects all the books together?

A lot. We had a summit, and they asked me, Tom [King], [Brian Michael] Bendis, Geoff Johns, to pitch our two-year plan. Tom went up and pitched something great for Batman, Bendis pitched Superman, and I went up and this is what I pitched for Justice League. But the difference is, for me, Justice League should be reflective of everything that’s going on in the rest of the DCU. Celebratory, even. But I want it to drive story as well. It’s the center of the whole thing.

That’s why I wanted to use the Hall of Justice, the Legion of Doom — I feel like the book is meant to reflect the times. For this moment, I want people to pick up the book and think, “Wow, we’re in it together with these characters.” You could walk into the Hall of Justice and see the trophies; they’re real, they’re human, they’re not gods, you know? I mean, sure, some of them are not human…

But Superman and Martian Manhunter are two of the most human of all the superheroes despite being aliens.

And on the other hand, you have Lex Luthor being all, “Come in here, come into the Hall of Doom.”

Which speaks to what’s happening in the world — people who want to advance the idea that we should be tribal, that that’s how you win.

Luthor says, “Run your car. Waste your water. Who gives a shit? You get this much time, and you know why? Because whoever’s up there and made this multiverse, they made us pathetic and small. They made us live this long and only get so much.” What he’s learned indicates that there’s another form humans could have, and it’s bigger and scarier. So he’s like, “Use everything up, be your best self, then let’s storm those gates and kill them. We’ll live forever together.”

Are you thinking about the politics of today, writing this? Because it’s hard to avoid seeing some parallels.

When you look at my Batman run with Greg [Capullo], the things that I really enjoy isn’t really the politics of the moment but the spirit of it and what these characters can represent beyond a political faction. I’m very open with my politics — I’m a total lefty liberal — but Batman should never be telling you who to vote for in that way. But what the heroes represent, to me, is the idea that we need to do this together. We can’t be tribal. And if we are tribal in that way, not only do we bring out the worst in each other, but this whole thing is going to fall apart.

And Lex Luthor is the opposite end of this aspirational idea, that being your best self means being selfish.

Exactly! We can be this spear and just throw everyone else off the life raft. There is something political in this; we’re all in camps now — there isn’t a lot of bridges or communication. Justice League is saying the way to save everything is to work together and evolve things into something better. And Lex Luthor is saying, “You’ve been trying this for thousands of years, and it always falls apart. Let it fall apart and take the pieces to make a weapon to kill the things that made us this way.”

It’s relevant to me emotionally, and what I want for my kids. I hope that people will read it and think it feels made of the stuff that’s in the air in this moment. The book is important to me in that regard. 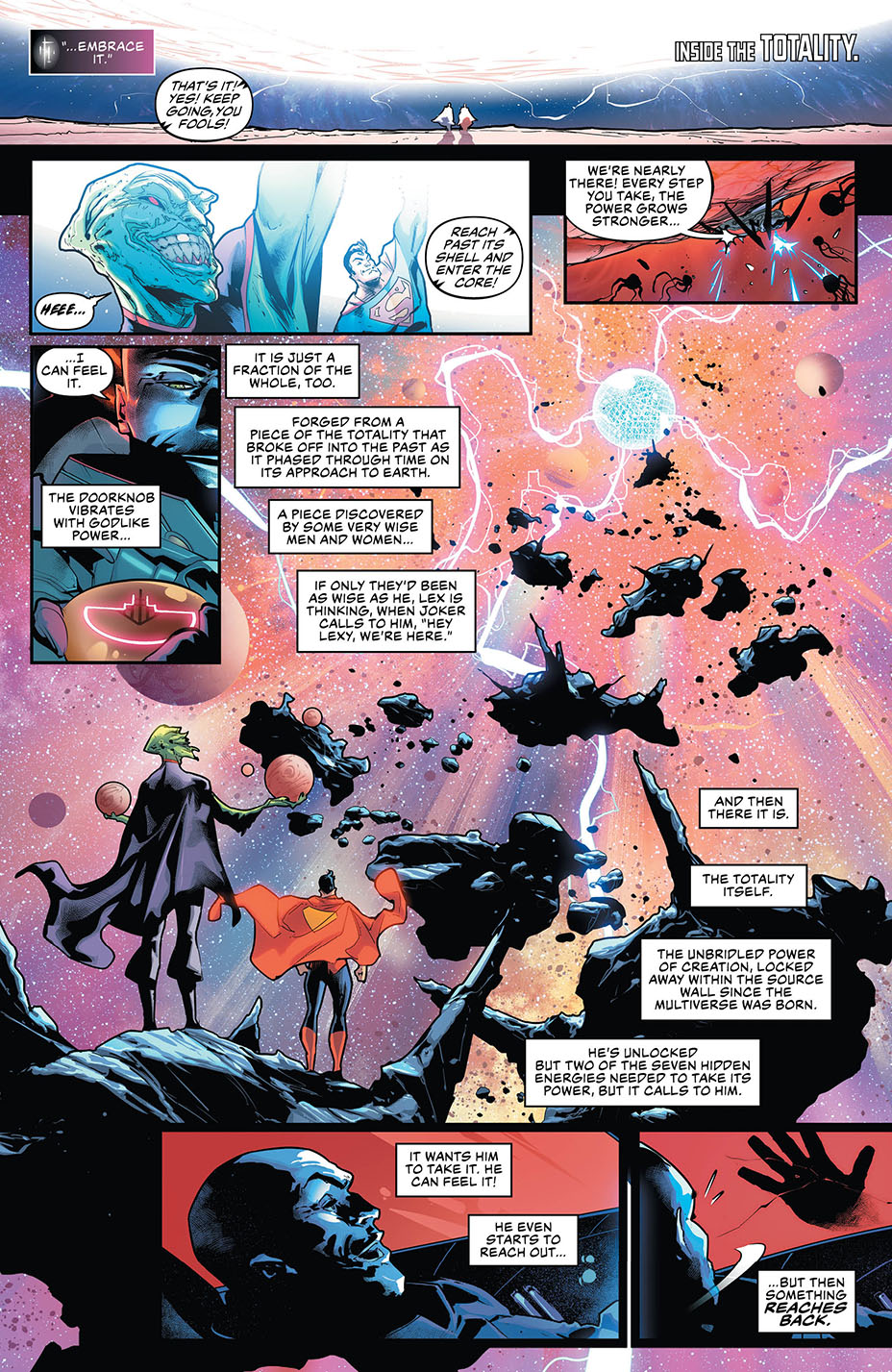 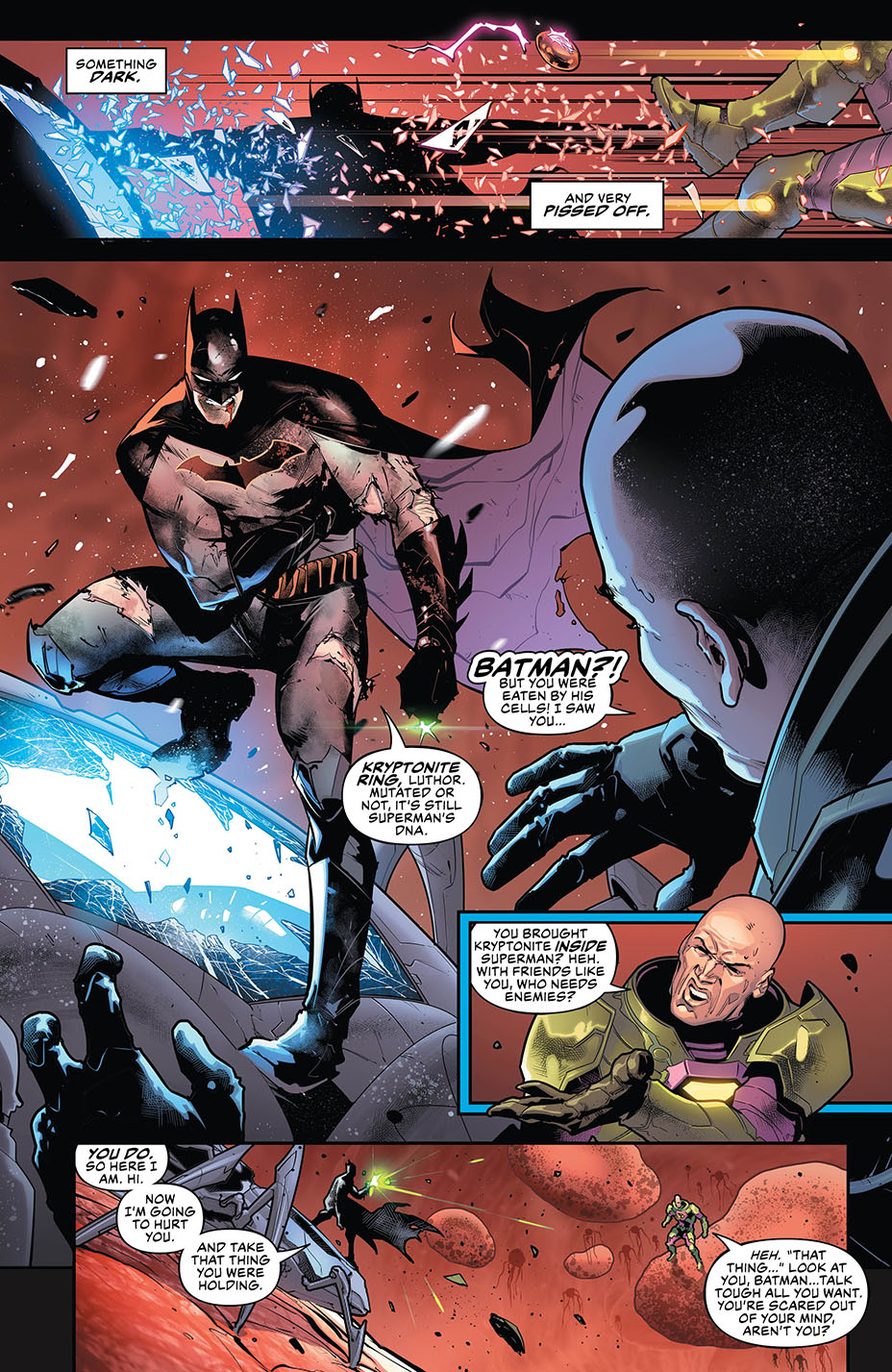 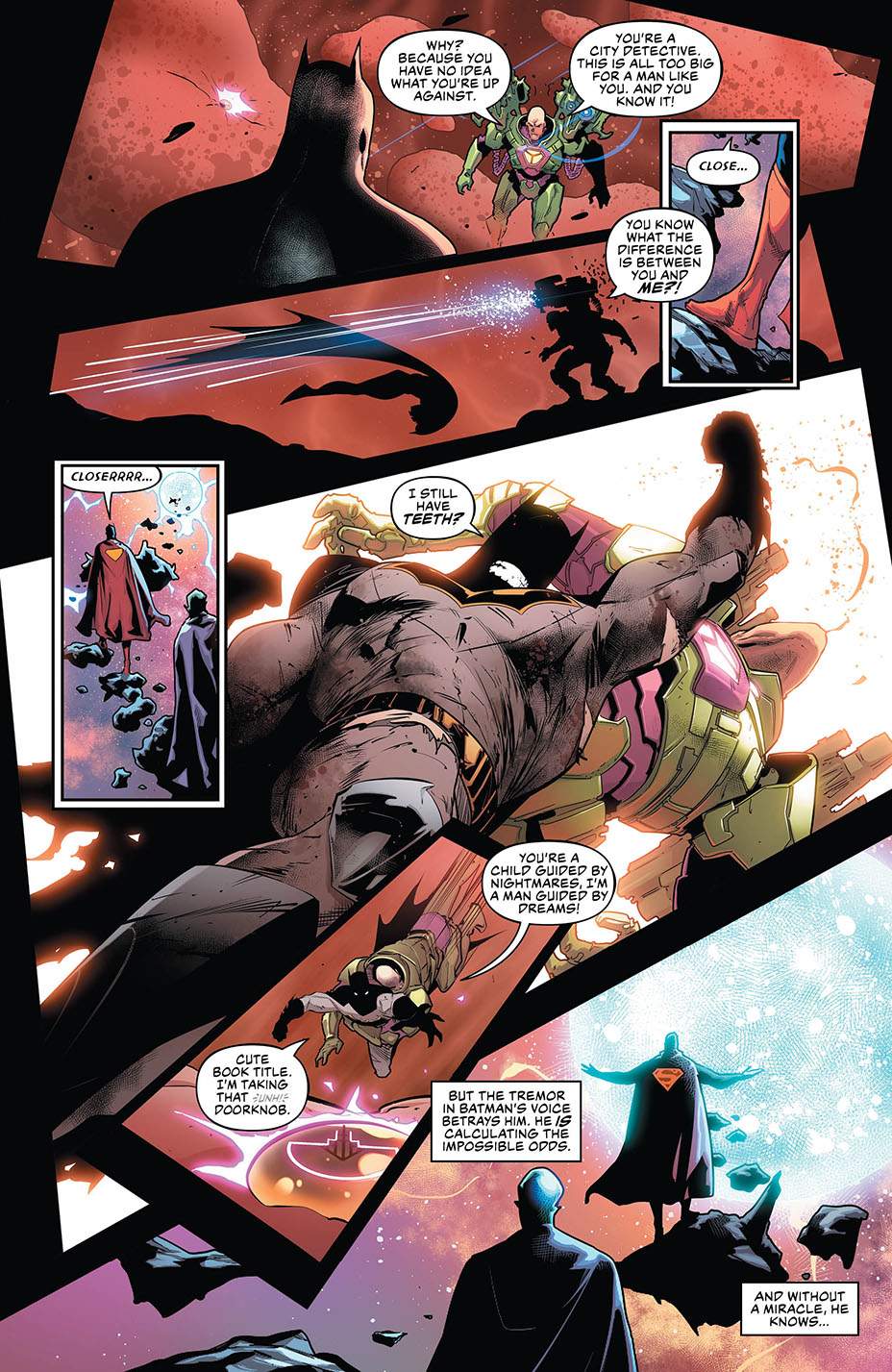 Justice League No. 6 is available digitally and in comic book stores now.