Runway looks aren’t always practical — one only needs to look as far as Rei Kawakubo’s Comme des Garcons runway for proof of that — but sometimes, an aesthetic flourish can have an unexpected upside.

The plastic pieces seen on Raf Simons’ debut Calvin Klein Collection runway are the perfect example. Turns out, the clear plastic cocktail dress — a reference to America’s diner culture — is actually the perfect ensemble for a warm but damp night on the town. 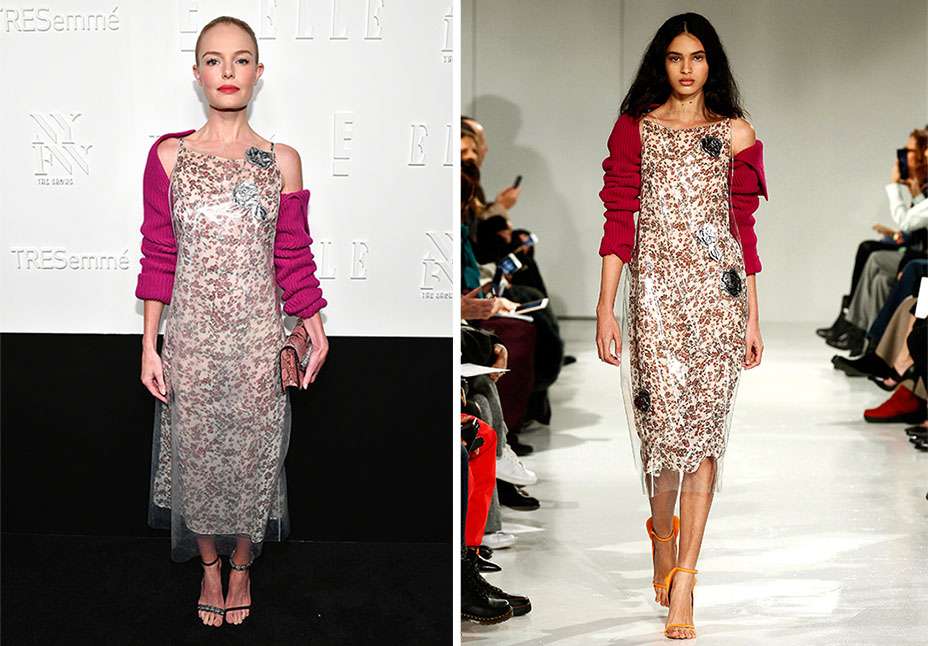 “How functional to wear a plastic dress on a rainy evening!” exclaimed the plastic-clad Kate Bosworth at Wednesday evening’s celebration of personal style hosted by Elle, E! and IMG as a pre-party for New York Fashion Week. At only 34, the L.A. native has become a fashion heroine who could wear a burlap sack and still be awarded the title of best-dressed. (After the plastic gown, though, a burlap look really doesn’t sound all that far-fetched.)

The actress went on to sing Simons’ praises, noting her excitement for the upcoming Calvin Klein show on Sept. 7. His designs are “thought-provoking and interesting,” she said. “I remember when the yellow coat came down the runway — which has obviously been on every cover — I had an immediate response to it. I just adored it. But as I looked at the collection, I had a tremendous consideration for the detail. The inside of a coat was something I hadn’t noticed, it was a quilt, and I thought, ‘Oh, of course, because he’s referencing Americana.’ “

Will New York Fashion Week's Runways Be as Politically Charged as Last Season?

Another style standout, who has been rising through the fashion ranks with the help of superstylist Karla Welch, was Tracee Ellis Ross, who paired her Ronald van der Kemp couture floral gown with the coveted belted leather Rihanna x Manolo Blahnik 9 to 5 boots.

“They were a natural booty pop,” joked Ross. “They certainly pushed my butt up in a way that I was not expecting!”

Gabrielle Union, one half of the fan-favorite fashion hashtag #TheWadeWorldTour, also stepped out on the rainy evening, arriving in a black two-piece look by Prabal Gurung that was embellished with tiny pearls.

The Being Mary Jane star, who works with stylist Thomas Christos to put together her lit looks, also reflected back on her fashion-filled trip to Paris Fashion Week with her hubby, Dwyane Wade. The NBA star caused a frenzy on a few sports outlets when he was spotted carrying Thom Browne’s dachshund bag, which was modeled after the designer’s Instagram-sensation pup, Hector Browne.

“We had a battle for who would get the dog bag; he wouldn’t give it up,” noted Union. “I thought, because it was a purse, it was for me, and he was like, ‘No, why would you think that?’ He was very serious about the dog bag.”

Speaking of serious issues, Union also weighed in on what’s likely to be another politically charged NYFW. “If you consider yourself a decent human being that is reasonably woke, it’s our duty to our fellow man to give a shit. And if you can give a shit through fashion, awesome; if you can use social media to not only live-tweet Being Mary Jane but to support our Dreamers, awesome,” she said. “Especially in fashion, if you’re selling things, it’s important to let your consumer know that you give a shit.”

Ross agreed: “I think everyone has a responsibility to stand up — fashion, Hollywood, everybody. This is not a time to be asleep.”