Continue to The Hollywood Reporter SKIP AD
You will be redirected back to your article in seconds
Skip to main content
July 30, 2019 9:00am

After Steven Spielberg visited the offices of video streaming startup Quibi this year, he emailed his friend and founder Jeffrey Katzenberg with an idea. “To say I was surprised is an understatement,” Katzenberg recalls. “He had, himself, written four chapters of a super scary, pretty creepy story.”

But Spielberg had a stipulation. He wanted the project to be viewed only after sundown. So Katzenberg asked Quibi CEO Meg Whitman to convene the product and engineering teams, which went on to develop a feature that will unlock new episodes of the Spielberg show, dubbed After Dark, only once night has fallen. “Arguably the greatest storyteller of our time, when he hears about something new and different, he turns his imagination loose, and there you go,” Katzenberg says. “I would never have thought of that.”

While After Dark is perhaps the most ambitious show that Katzenberg has lined up for Quibi ahead of its planned April 6 launch, it’s now one of several from top Hollywood talent. With $1 billion in the bank and a goal of releasing some 7,000 pieces of content during Quibi’s first year, Katzenberg has been on a buying spree for the mobile-only platform. In June and July alone, Quibi has revealed no fewer than 20 new projects from partners that include Tyra Banks, Darren Criss, Rashida Jones and Veena Sud. They join previously announced efforts from Guillermo del Toro, Antoine Fuqua, Jason Blum, Jennifer Lopez and Anna Kendrick. He says there are several dozen more that Quibi has still to announce, including Action Scene, in which Kevin Hart will star as a fictionalized version of himself.

Hollywood is jumping into business with the startup despite pervasive questions about how consumers will respond to an app devoted to shortform episodic programming that’s meant to be viewed during day breaks. “Everyone’s sipping the Quibi Kool-Aid,” says one producer who, in the same breath, adds, “on its face, it seems like a thing that’s never going to work.”

Katzenberg, 68, has had a long career in Hollywood, orchestrating a turnaround at Disney and growing DreamWorks Animation into a $3.8 billion business that sold to NBCUniversal in 2016. But Quibi might be his riskiest move yet. Amid the war for streaming dominance raging among Netflix, Disney, Amazon, WarnerMedia, NBCUniversal and Apple, in which treasured franchises like The Office and Friends are the battle spoils, Katzenberg is taking a decidedly different approach. He and Whitman are betting that young people (specifically, those 25 to 35) are thirsting for premium, highly produced programming delivered to their phones in 10-minute bursts. 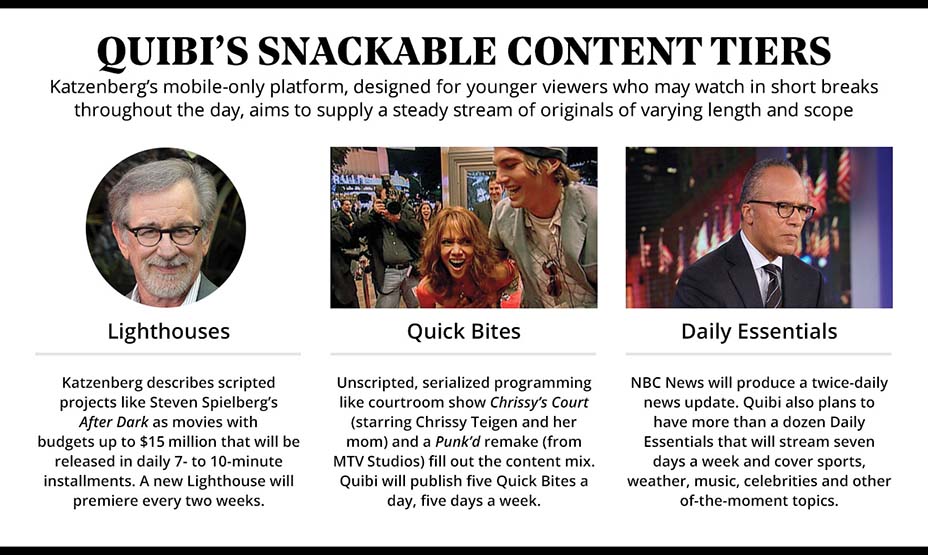 There’s data to back them up, including investor Mary Meeker’s Internet Trends Report, which revealed that in 2019, people will spend about 226 minutes per day on average on their mobile devices, 10 minutes more than they will spend in front of a television set.

But the past five years have seen the rise and fall of several shortform video startups, including Verizon’s go90, Comcast’s Watchable, Fullscreen and Awesomeness’ Made for Mobile, which never got off the ground. There also are questions about whether consumers will open their wallets for a service that doesn’t have the brand recognition of a Disney or the deep catalog of a WarnerMedia. (Quibi will cost $5 a month with ads — typically 6 to 15 seconds in length, depending on the video — and $8 for an ad-free version.) This, coupled with the fact that there are already platforms like YouTube and Twitch where young viewers are being served up programming tied to their tastes — for free, no less — has made media observers skeptical about whether Quibi will work ever since Katzenberg first unveiled his plans in August 2018. “There’s a lot of uncertainty,” says a creative executive who has taken meetings with Quibi.

So why are some of those same skeptics waiting in line for a Quibi paycheck? Always eager for another buyer, Hollywood has begun to recognize Quibi as a deep-pocketed new home for a certain kind of project. “I love the idea of creating chapter breaks [that end] with a scare and a cliffhanger,” explains Van Toffler, the CEO of independent studio Gunpowder & Sky who is producing horror anthology 50 States of Terror for Quibi with Sam Raimi and Tony DiSanto. “Now, traditional filmmakers may be freaked out by the fact that their movie is going to be cut up narratively into 10 chapters. I just think it’s a wonderful challenge that’s in tune with how consumers are consuming content.”

Quibi’s biggest draw is Katzenberg himself. It’s his long tenure in the business that has helped him land investments from NBCUniversal, Disney, Sony Pictures Entertainment, WarnerMedia and Viacom. And the strength of his relationships also has led to deals with Spielberg, del Toro, Fuqua and others of their ilk. Sud says her project for Quibi, the thriller The Stranger, came out of a conversation with Katzenberg. “I went in really interested but also wondering what 10-minute episodes of television might mean,” she recalls, adding that she left the meeting feeling like Quibi “was a completely different way of delivering content that, in and of itself, would necessitate a different type of storytelling.”

Others who have visited Quibi’s Hollywood headquarters describe Katzenberg as hands-on with the programming, regularly dropping into meetings for all types of projects. “Jeffrey being front and center and talking directly to high-end talent makes people feel very comfortable about taking a project to Quibi,” says Frank Jung, co-head of the digital talent and packaging department at CAA.

Quibi’s deals also are talent-friendly. The company is licensing content for seven years, meaning the studio or production company behind the project retains ownership rights. And after two years, the rights holder can repackage those 10-minute chapters into a TV show or film and take it back into the market. But while talent likes that, especially in an age when Netflix and other distributors are moving to a model of owning everything they release, several people acknowledge that those terms are not the primary selling point. After all, it’s unclear what kind of market there will be for, say, a movie assembled from a two-year-old Quibi show.

Quibi also is able to lure the kind of high-profile talent that has long ignored the shortform space because of its up-front investment in programming. The company is offering cost plus 20 percent on all projects, meaning immediate profit for the rights holders. Per knowledgeable dealmakers, Quibi is paying anywhere from $6 million to $15 million for scripted, film-like “Lighthouses.” Unscripted “Quick Bites” and current-events-focused “Daily Essentials” from patrons including NBC News cost significantly less.

The biggest challenge that Quibi faces when it comes to attracting talent is one that even Netflix dealt with early on: It’s rarely a creator’s first choice. Fuqua, for example, tried to make veteran drama #FreeRayShawn as a film before taking it to Quibi. Of the dozen creatives and representatives that THR polled, nearly all agreed that Quibi has quickly joined the list of outlets they will visit when they’re pitching a new project. But several sources acknowledged that it’s seen as a backup if another, better offer doesn’t come through. “We’ll put them in the mix, but not necessarily as a first resort,” says one rep, while another calls it “low-hanging fruit” for someone who wants to make sure a project gets made. Both sources acknowledge that they’ve yet to have a scenario where Quibi beat out a more established platform like Netflix for a project.

Katzenberg says he doesn’t mind buying up passed-over projects, pointing to E.T. as a box office hit that it took Spielberg years to get made. “Great stories are great stories,” he says. “There are things that were developed for broadcast as pilots that could actually be reconceived pretty quickly and easily as something that would work well for us.” Katzenberg notes that Quibi picked up Scorpion creator Nick Santora’s thriller pilot, for instance, after it had failed to find a broadcast home. Liam Hemsworth is now set to star.

It’s not lost on Katzenberg that he’s asking talent to take a leap of faith with Quibi. Although he and Whitman have hired 160 employees, booked $100 million in advertising commitments — including those from blue-chip brands like Walmart, Pepsi, Anheuser-Busch and Google — and plan to spend $470 million to market Quibi in its first year, even they don’t know how viewers will respond when the service goes live in eight months. “We’re going up on a high wire and there’s no safety net underneath it,” he acknowledges. “We understand what we’re doing fits somewhere between improbable and impossible.” 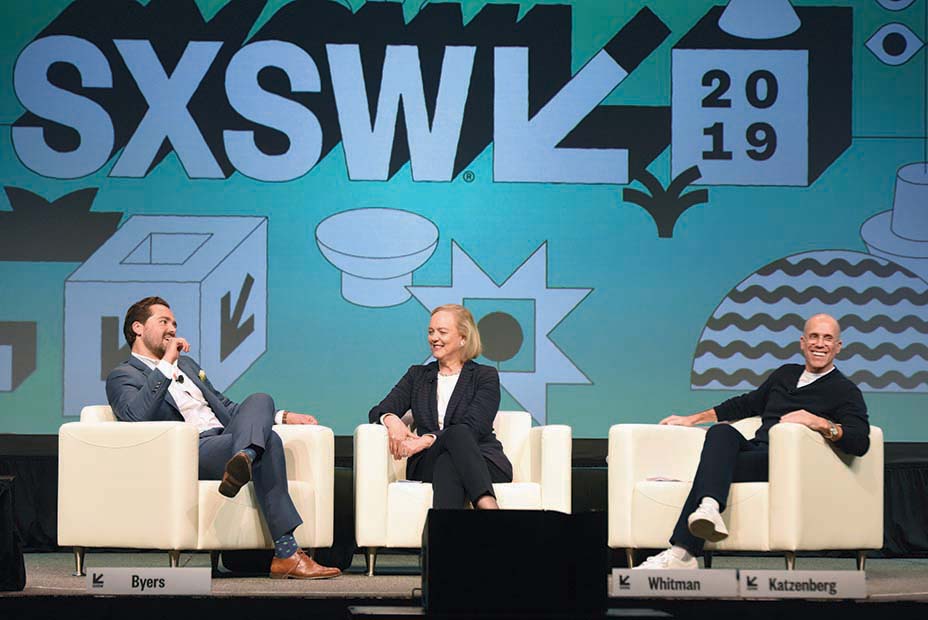 Quibi: All the Programming (So Far) Set for Jeffrey Katzenberg's Shortform Streaming Platform

A version of this story first appears in the July 31 issue of The Hollywood Reporter magazine. To receive the magazine, click here to subscribe.