Keith Olbermann rose to fame at ESPN before entering the cable news fray at MSNBC, where he was a forceful critic of George W. Bush. Ah, the good old days. Today, the 58-year-old, like many liberals, often feels like he’s in an alternate universe — or wishes he were. “It’s exactly that feeling you get in a dream where there’s a nuclear war or you’re back in the fourth grade,” he says. He exorcises his anxiety via his GQ video series The Resistance, which is in its second season. Since the September 2016 premiere, he’s taped 170 commentaries, culled for his new book, Trump Is F*cking Crazy ($27, Blue Rider Press).

Olbermann has authored previous books based on his TV commentaries on MSNBC’s Countdown, but the Trump book “actually manages to produce a narrative of the whole campaign and more importantly, the warnings that were not heeded,” he says. “So it became more than the sum of its parts. I’m very pleased with it, actually. It reads like the Titanic is in the water, and you get that sense that, well, maybe they won’t hit the iceberg this time. And then on the next page, no, they hit the iceberg all right.”

Have you read some of the other Trump books?

I have to engage in the things that are the furthest possible from Trump in order to decompress every day, like arcane sports research projects. I’ve been trying to get a photograph of every player who performed in the World Hockey Association from 1973 to 1974. 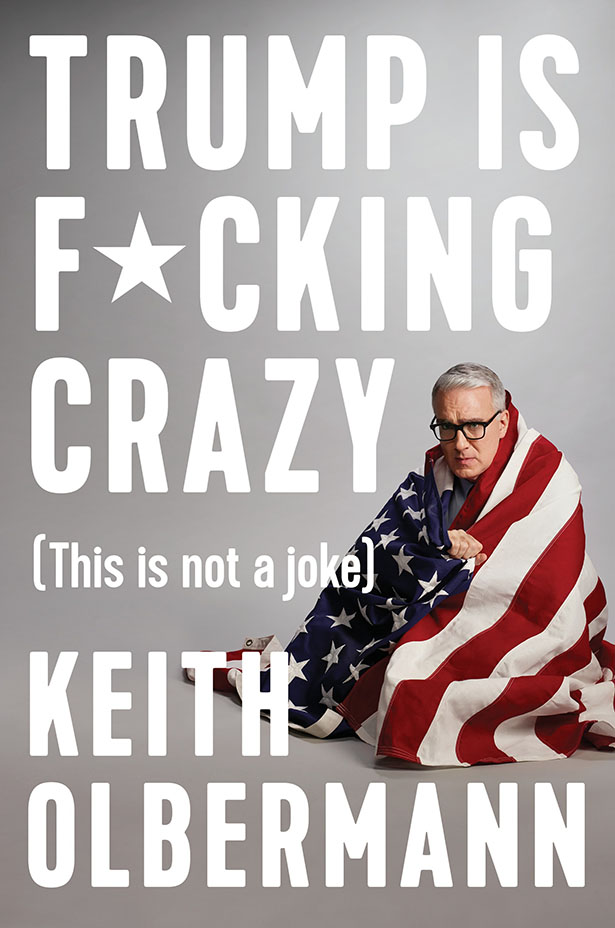 Is your job at GQ cathartic for you?

To me personally it’s always been easier if I’m commenting in some way. That is how I process it. I did not think that it would become a 24-hour-a-day, 7-day-a-week job. There are some therapeutic values, there are some cathartic values, there’s a lot of technical satisfaction. We just crossed 300 million views for the [episodes] just since the election and 350 million views for the whole thing going back before the election. Technically, it’s probably got as broad a reach as anything I’ve ever done. But that shouldn’t be confused with any of it being enjoyable. It’s not like if [Trump] resigned at 3:30, I would go, “Oh, this ruined the book!” If this book turned out like Current TV, it would be really great. I mean totally forgotten and erased. No record of it whatsoever.

Do you still watch cable news?

Turning on CNN and MSNBC is of no value to me. Number one, I know all the tricks. Number two, I know all the conflicts. Number three, I know all the self-interest. The structures of cable news and other networks are still: “How do we leverage this? How do we position ourselves correctly?” Rather than: “The country is on fire — what do we do?”

Who do you think is doing good work on the beat?

The people who are doing the Hall of Fame work are the people in the field: [CNN’s] Jim Acosta, Natasha Bertrand [from Business Insider], [NBC News reporter] Carol Lee, [The Washington Post’s] Abby Phillip, Daniel Dale from the Toronto Star. Paul Wood at the BBC has only broadcast maybe eight pieces about the Trump campaign and Russia and each one has been a barrel full of poison darts. His work has been outstanding. Major Garrett, who is a friend of mine, is doing great work for CBS News on this story. The number of times that they managed to essentially sneak the truth past mechanisms that say the truth might be dangerous to our bottom line, they are all to be commended. The anchors used to drive and motivate the tone of the coverage. That’s gone. The power shift is [toward] the people doing the hard work, the risky stuff, the field people.

What do you think of Megyn Kelly’s shift to morning TV?

In the sense of trying to reposition yourself, she gets a round of applause. But not every talent fits every format. But now, of course, everything that doesn’t work in television is because of politics.

Never mind that the NFL ratings have been declining at a steady rate for 10 years. It is all because of Colin Kaepernick. Nobody has time to think anymore, therefore the logical fallacy applies to everything; if B follows A, A caused B. And every A and every B is politics. You can’t get away from it. Megyn Kelly isn’t succeeding because: politics. The NFL ratings are down because: politics.

The right has been pushing this narrative that ESPN is losing subscribers because the network is too liberal and PC.

I believe they have actually taken steps in the last couple of years that have slowed down the loss. ESPN has been doing better than it was, and its handling of these controversies has been exceptional. You can’t get it all right, but I think they’ve been doing a good job in getting most of it right.

What do you think of ESPN’s suspension of Jemele Hill for violating its social media policy?