Less than two weeks before opening night of his 17th season on NBC’s Saturday Night Live, Kenan Thompson — the longest-tenured castmember in the show’s history — made an appearance Tuesday in Washington to help promote Everfi, a tech company that combines education and social action to expose students to information and experiences beyond traditional boundaries.

Everfi CEO Tom Davidson says that one of the company’s missions is to bring creative storytelling to subjects that might otherwise seem dry, difficult or hard to deal with — including financial literacy, bullying prevention and a deeper look at African-American history that shows how African-American innovators and influencers have shaped our nation through demonstrations of grit and determination that often go unrecognized.

'SNL': Eminem Puts Pete Davidson in His Place During 'Forgot About Dre' Parody

The latter is a particular passion for Thompson, who became acquainted with Everfi through Davidson’s sister, a friend. “When she was telling me about what her brother does — expanding the opportunity for great education, especially for all those [underserved] communities … I was trying to find a way to work with them from day one,” says the comic actor. In his remarks during a celebratory lunch at Everfi’s Georgetown offices — with more than 100 civic and industry leaders in attendance, including D.C. Mayor Muriel Bowser — Thompson said, “I’m a big fan of the big picture. I grew up in Atlanta and came from very humble beginnings. … The opportunity to get involved and effect change like that is rare, so I jumped at it.” Everfi also has the backing of big-name investors including Bono, Richard Branson, Jeff Bezos and Laurene Powell Jobs.

After lunch, Thompson spoke openly with The Hollywood Reporter about SNL’s upcoming 45th season, even touching on the upheaval around the recent dismissal of newly announced castmember Shane Gillis after he came under fire for using racial and homophobic slurs on a podcast. Discussing casting changes this year, Thompson — true to his reputation for being the show’s grounding force — stays even-keeled. He’s looking forward to working with new addition Chloe Fineman, whom he has yet to meet but says she “seems like she’s going to be a great addition.” He’s also excited to see other new castmember Bowen Yang’s turn in front of the camera (Yang is one of the few SNL writers who have made the leap from desk to screen, and he’s also the first Chinese-American castmember in the show’s 45-year history), adding, “I’m just sorry it had to be splashed in drama.”

Asked about the opportunity for SNL to turn this awkward moment into social commentary, Thompson says, “I think they already made it. They put their stamp on there — which everyone would have assumed about SNL anyway — that we don’t tolerate abuse or disrespect of anyone, racial or otherwise. It’s just not conducive to a comedy show.”

As for how he imagines filling a Leslie Jones-sized hole in the SNL landscape, Thompson says, “I don’t know if you can. She’s one of a kind. I’m going to miss seeing my dear friend [on a daily basis].”

Part of what makes Thompson such a perennial favorite with seemingly no expiration date is his ability to not only read a room but also lift those around him. “I never throw the wall up just because someone rubs me the wrong way. Who knows, maybe I came off the wrong way? That just comes from years of working in a service job like that,” he says. “A lot of people misconstrue [the show] as an opportunity to become a star, but it’s really a service job. It’s [the host’s] week. They’ve done so much in their careers to get them to that moment — I can’t make it about me. Once you get into that ideology, you have a much better time.”

Asked about drawing the line between funny and offensive, Thomson has a simple rule: “Listen to the audience — they’ll tell you. The laughs will tell you. ‘Did that hit home?’ ‘Was that leaning too far to one side or the other?’ If the joke is smart enough — regardless of which side you’re on — and if it’s true, it will probably land well.”

Thompson is ready to explore that line this season: “We’re all pretty anxious to get back to it because it’s going to be a pivotal election cycle. I’m looking forward to seeing what we’re going to do with [Donald] Trump. I don’t know if Alec [Baldwin] is tired of it yet; it would be nice to get a castmember up there, see a new impression and change it up. I enjoyed the Baldwin times, but he has, like, 19 jobs — and he’s about to have another kid, which is why he has all those jobs.”

Even after 16 seasons, Thompson has plenty of energy for a fresh one. “I’m excited about Chloe and Bowen and excited to get the old crew back together. All my ‘babies’ are now, like, in their fifth and sixth years. And Kate [McKinnon] has won more Emmys than I can count — she’s like a tornado. It’s just going to be a pleasure to be able to get back there and see them work. It’s a pleasure every single time. That’s why I’m in no rush to leave. Because number one, it sucks to audition — but number two, I have a front-row seat to all this brilliance.”

When the day comes that Thompson is finally ready to say goodbye to SNL, what would that walk-off sketch look like? “I’ve always had ‘What’s Up With That?’ at the back of my mind,” he says with a smile of his recurring sketch as the host of a BET talk show. “Bringing everybody back for it — it’s got to have all its people. And then have it just be 20 minutes long. [That skit is] just the funnest thing ever because there’s just no reason to it. Every time there’s some kind of reason to it, we need to cut it off and get back to the singing, get back to the circus.” Thompson’s face lights up. “It’s just a parade of crazy. As soon as that music starts … hey, it’s not my fault, I’m not the one playing the music! The music starts and I gotta go with it.” 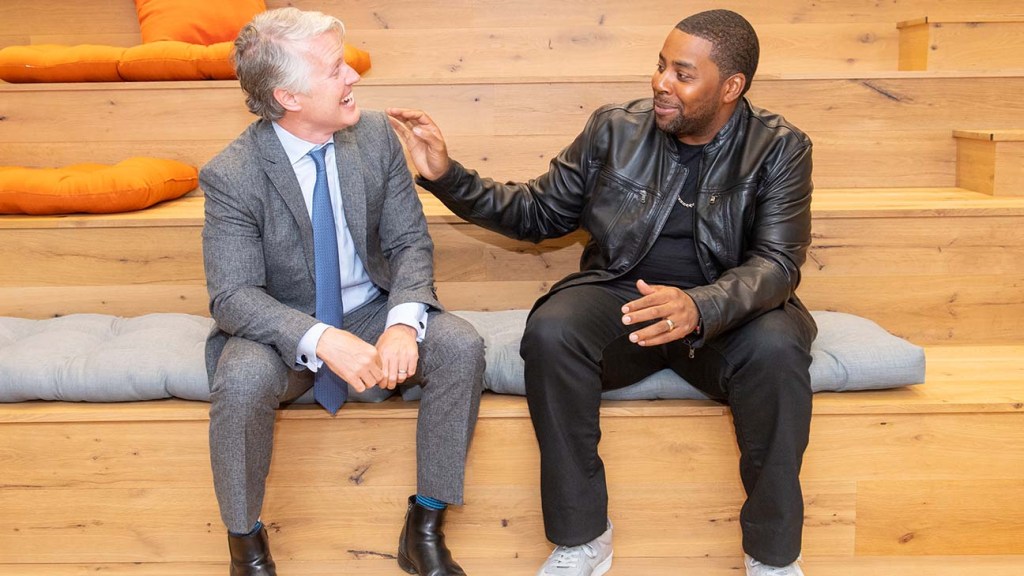