After the film adaptation of her Broadway play American Son dropped on Netflix in late 2019, producer, star and, now, Emmy nominee Kerry Washington urged fans to engage with her in a dialogue about what they’d just witnessed: a heart-wrenching tale of a biracial couple whose son, Jamal, is killed by the police. What followed was a series of powerful exchanges with Black viewers, who were grateful to see their stories reflected, and non-Black viewers, who were grateful for the opportunity to try to understand a different perspective. When Little Fires Everywhere debuted on Hulu in March, the feedback was similarly powerful. “To be able to hold a mirror up to society where some get to see themselves and some get to experience the other is really a tremendous gift,” says Washington, who opens up about the power, responsibility and heartache of playing American Son‘s Kendra and Little Fires‘ Mia.

Script to Scene: How 'What We Do in the Shadows' Riffs on Vampire's "Rough Rules"

You have two projects that, in very different ways, explore themes of unconscious biases, racial justice and raising children in privileged worlds. In what ways did you influence these two characters, and in what ways did they influence you?

And yet very different versions.

Yes. With American Son, a lot of the pull was that she really felt like the un-Olivia Pope [Washington’s Scandal character] to me. I had spent seven years living in some ways this romantic fantasy of what interracial love could look like between two really powerful people with a great deal of agency, cultural understanding and mutual respect. He literally invents a war to rescue this Black woman — talk about Black Lives Matter. So there was that version, and I think that version was really important, but it felt like American Son was an opportunity to explore what the challenges to an interracial relationship could be in this day and age, with two people who love each other very much but don’t have the same kind of cultural respect and understanding, and with a Black woman who doesn’t have the same kind of agency. And when there’s a child involved, because inherent in parenting a Black child is a level of fear and vulnerability that Olivia Pope never had to grapple with because she made the choice to not parent a Black child. So the pull was to explore the other side of the coin of what Scandal wasn’t — it was attractive to me as an actor but also to my unconscious to explore the shadow part of the fairy tale that I’d been living. 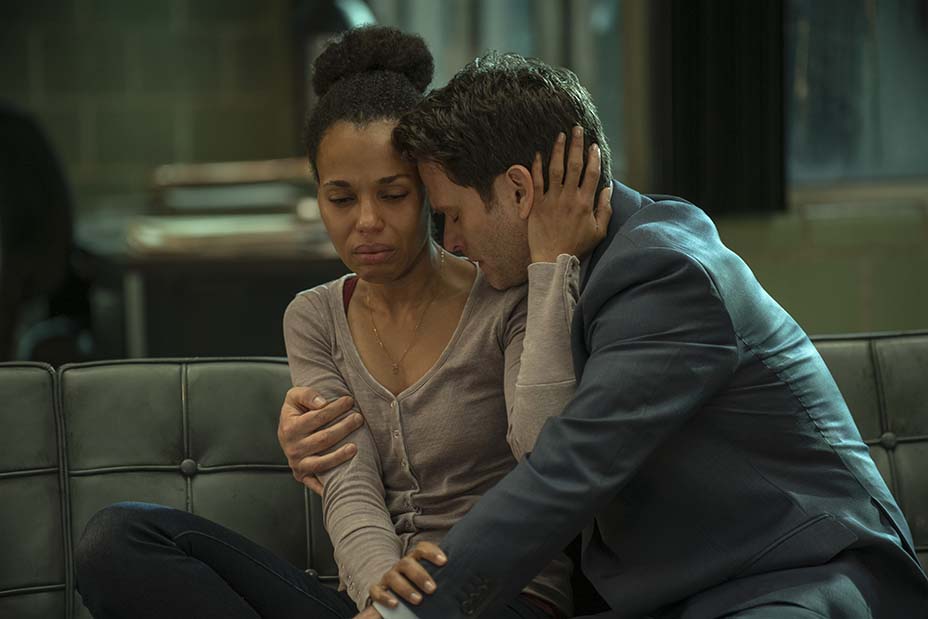 And what did Mia teach you?

Some of it, quite honestly, is deeply personal. But there was a point in preproduction where Reese [Witherspoon] and I were looking at the different [teenager] costumes and reminiscing, like, “Oh, I had those shoes.” And, “Oh my God, I used to wear my hair that way.” We were those teenagers in the ’90s, and therefore we had both taken on the task of exploring who our mothers were in this show about motherhood. We were choosing to step into our mothers’ shoes. And for me, it was really both my parents’ shoes, and to consider their hearts and their journeys and their secrets and their sacrifices and what their sacrifices cost them — so, it was a profound experience. 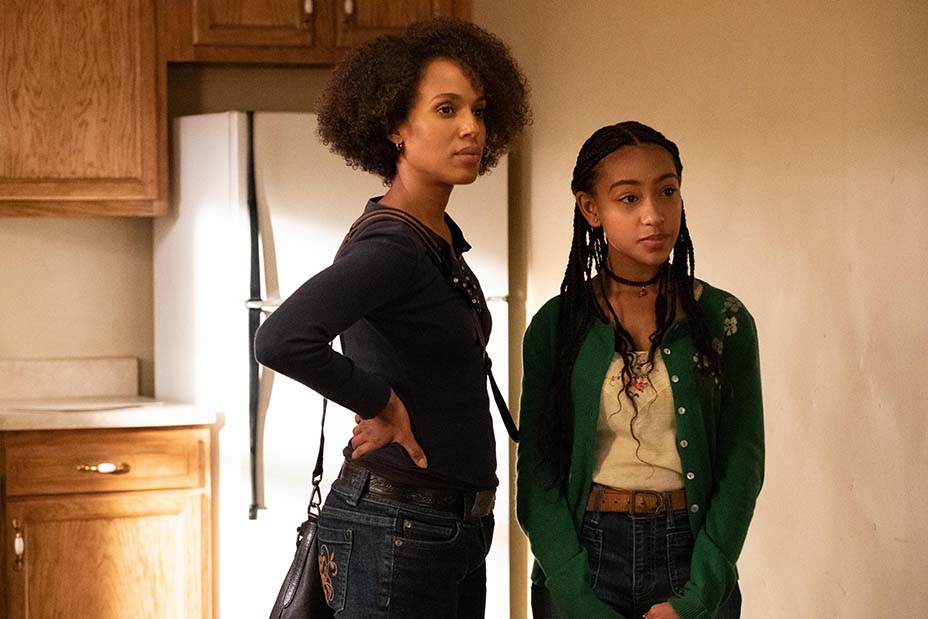 How does your role as a mother impact the choices you make and the way you experience them?

When I was doing American Son, every day I’d commit to dropping into the absolute worst nightmare of every parent, regardless of race: to wake up at 3 a.m. and not know where your teenager is. Of course, it’s exponentially more complicated when there are systems in place that are invested in institutional racism and target your child. So, I’d drop into this nightmare for a little under two hours and then it would be done, and after the play I was so happy that I had made it through. And it’s funny because people would come to my dressing room after and they’d be destroyed. I remember Michelle Obama sitting in my dressing room like, “What just happened?” And I’d be like, “But it’s done! Let’s go for drinks. Let’s take selfies.” I was so happy.

And one of the things that it really helped me do was, like, outside of the theater, I was so deeply rooted in the joys of motherhood — the joy and the blessing of parenting Black children, bringing up this Black girl magic and this Black boy joy, and living so fully and letting the pendulum swing all the way to the other side, which I don’t think we do as parents. We can get so caught up in, like, making the breakfast and packing the bag and the meetings with the teachers and, “Are they late for school?” All of that, but I was so rooted in the gift of them when I wasn’t in the nightmare of Jamal’s journey and so that was really powerful for me.

I’m sure. How did Mia ultimately impact you as a parent?

The thing that really resonated for me was her being unapologetic. With Mia, by the end, she learns to say sorry and she apologizes for the things that she does but she never apologizes for who she is. And that’s really powerful. As women, we can be very apologetic and can play small and Mia is very secure in who she is. She doesn’t make situations more comfortable for other people and part of that is a defense mechanism but part of it is she’s unapologetic about being a Black woman, about being an artist, about the life choices that she’s made and I really love that. I spent time with [artists] Lorna Simpson and Alexandra Hedison in preparing to play Mia — and there’s an unapologetic nature that I think visual artists walk through the world with. A sense of confidence of, like, I can take these objects that other people play with in preschool and I can create works of art worth half a million dollars, and that sense of confidence and security in one’s calling and choices shows up for Mia. I’m really grateful to both of those women for spending time with me and helping me wrap my head around the mind and heart of a visual artist.

On the wall of your dressing room during American Son, I believe you had a wall dedicated to images of a lot of these young men and women, from Trayvon Martin to Sandra Bland, who lost their lives to police brutality. If I have this right, you were constantly updating the wall with new victims until it was full. How did that impact you as you’d walk out on stage each night?

I also had some drawings of slave ships and stories of slave mothers whose children had been ripped from their arms and sold down river because, again, interwoven into Black motherhood is generations of loss and fear for our kids. Having all those pictures up and having Eric Garner’s mother come to the play and hear us say, “I can’t breathe,” and having Sandra’s sisters come and having them there in my dressing room helped to remind me that I was devoting myself to revealing the complexity of Black motherhood from Kendra because Kendra’s story carries the DNA of the generations of pain of Black motherhood. And that I had a responsibility to walk on that stage or to walk into that soundstage when we were doing the film and to really tell the truth, to not hide it, to not make it pretty, to not shy away from it, to really go directly into the heartache every single night to honor the generations of loss.

After American Son came out on Netflix, you shared a discussion guide with the public in an attempt to engage in a dialogue. You also released your cell number, through community.com, and invited viewers to reach out about what they’d seen. What did you hear that’s stuck with you?

There’s been two really powerful versions of responses. There’s been a powerful response to American Son from Black people who say, “It’s so important to see ourselves.” I remember one of the most powerful responses was a teenage boy who came to see the play with his mom and in a talk-back after the play, he stood up and said, “Thank you for helping me to understand my mom.” He said, “She stresses me out and she’s always blowing up my phone asking me where I am and now I understand that it’s her loving me.” So, there’s that response in the Black community of, like, “Thank you for letting the world see us and see what we think and feel and the space that we have to hold for ourselves and our children and navigating all this pain and fear and what we’re up against in these institutions.” And then there’s also been the wave of responses from people who are not African-American saying, like, “Thank you for allowing me to understand, thank you for giving me a way to enter into beginning to understand what it is to parent a Black child.” And those are both such powerful responses — to be able to hold a mirror up to society where some people get to see themselves and some people get to experience the other is a tremendous gift. And I think it’s been similar for Little Fires.