Kesha, Barbra Streisand, Matt Bomer, Adam Lambert and more stars took part in GLAAD’s Together in Pride: You Are Not Alone, a fundraiser hosted by Billy Eichner and Lilly Singh that aired online Sunday.

The event benefited CenterLink, a coalition of more than 250 LGBTQ community centers that are providing critical services such as medical care, mental health counseling, virtual support groups, hot meals, HIV testing and more during the novel coronavirus pandemic. GLAAD said Sunday night that the event raised an initial donation of more than $225,000 for CenterLink and local LGBTQ centers affected by COVID-19 — the illness caused by the virus — with money still being collected. The Ariadne Getty Foundation was GLAAD’s largest donor, with $150,000 donated to the event.

During the event, Lambert, Bomer and others shared their own stories of coming out via video, from the confines of their homes.

Lambert, who came out in 2009, noted how much has changed in the past 10-plus years. He made headlines in that same year when he kissed another man during a performance at the American Music Awards.

“I kissed a guy for three seconds and the industry went crazy,” Lambert said during the event. “The next day I had to apologize…. I tell that story to somebody now who has not heard about it, and they are shocked: ‘Really?’ A lot has changed in 10 years.”

Lambert added that “it definitely taught me a lot very quickly; it taught me what my boundaries were publicly.”

The Queen frontman also noted that his Feel Something Foundation has partnered with GLAAD to auction off some of the looks he’s worn on stage for LGBTQ causes. The auction runs on eBay through May 6.

Bomer talked about coming out as well as his current experiences living in isolation with his family amid the coronavirus pandemic; he’s married to publicist Simon Halls, and the couple have three children.

“It’s been a period of adjustment,” he said. “I feel for all parents and kids, dealing with academic and emotional needs.”

Meanwhile, Kesha performed her song “Rainbow,” which she described as being “about seeing a rainbow through a shitstorm,” while wearing a sweater with a rainbow on it; Mj Rodriguez and George Salazar, part of the cast of the Pasadena Playhouse’s Little Shop of Horrors, performed a moving rendition of “Suddenly Seymour”; the cast of Broadway’s “Jagged Little Pill” sang the titular song; and Melissa Etheridge performed her song “Pulse,” which she wrote for the victims of the Orlando nightclub shooting in 2016. Alex Newell also performed during the event.

Streisand did not appear on camera but was featured in a voiceover, urging viewers to donate money to benefit the cause. 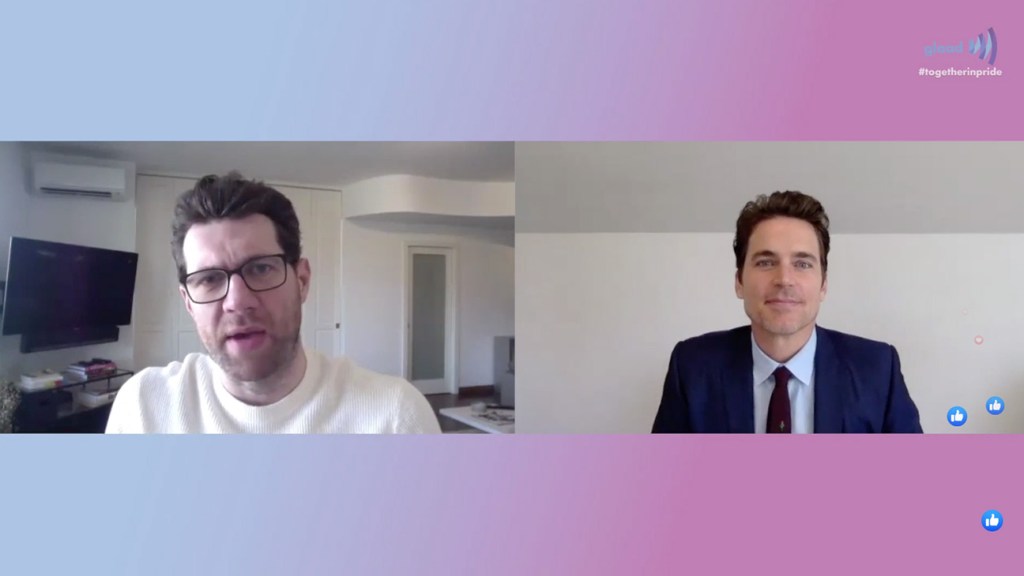 Others who appeared on camera included actor-singer Javier Muñoz, who is HIV positive. He used his experience to bring a message of positivity to viewers amid the coronavirus pandemic: “Having experienced living with HIV, there’s a little less fear, a little more courage, a little more experience behind this that says, ‘I’m still here after all that. I’m OK. We can be OK….’ Not to make less of what someone would go through with COVID, but to say, ‘You can survive this.'”

YouTube star Gigi Gorgeous and designer-model Nats Getty, who wed last year, also made an appearance. The latter noted that her company has been making masks and donating them to hospitals, the Los Angeles LGBT Center and more organizations that need them. In addition, all the money made from the sale of the masks — more than 100 are produced each week — is being donated to the Los Angeles Regional Food Bank.

Jonathan Van Ness of Netflix’s Queer Eye gave tips for staying groomed and styled amid isolation, saying it’s more of a state of mind than how one actually looks.

“It’s not so much about how we’re…looking but about how we’re feeling,” he said, adding that nobody needs to be spending a lot of money to look good amid the current situation. “Get creative with what you have…. [But] it’s OK if you don’t want to change clothes all the time.”

Former Democratic presidential candidate Pete Buttigieg and husband Chasten Buttigieg used some of their time during the event to encourage viewers to vote when the time comes.

Actor and producer Erich Bergen worked with GLAAD to create the event, which also featured the debut of a clip from Hulu’s upcoming Love, Simon spinoff series Love, Victor.